With federal disaster reserves running out, the House swiftly moved to pass President Donald Trump’s request for a $7.9 billion first installment of relief for victims of Harvey this afternoon.

The Trump administration is ultimately looking to use the urgent Harvey aid bill to solve a far more vexing issue, however: Increasing the U.S. debt limit to permit the government to borrow freely again to cover its bills.

FEMA is warning lawmakers that disaster funds will run out on Friday, even as a much more powerful hurricane, Irma, is bearing down on the eastern U.S.

The Trump administration is looking to use the urgent Harvey aid bill to solve a vexing issue: Increasing the U.S. debt limit to permit the government to borrow freely again to cover its bills

The measure the House passed today handles immediate emergency needs and replenishes reserves in advance of Irma. It does not say anything about the debt ceiling.

The Harvey aid bill was the first major item on a packed fall agenda.

Far more money for disaster relief will be needed once more complete estimates are in this fall, and Harvey could end up exceeding the $110 billion government cost of Hurricane Katrina.

GOP leaders such as Speaker Paul Ryan hope that lawmakers will quickly take on the more challenging job of increasing the government’s $19.9 trillion borrowing cap now that Harvey funding has passed.

The likeliest outcome, though, is that the Harvey aid bill will be paired with the debt limit increase in the upper chamber and remanded back to the House for approval all over again.

If that happens, the legislation is expected to pass, despite resistance from GOP leadership in the House and conservatives initially.

Treasury Secretary Steve Mnuchin said Sunday that it is the administration’s preference that Congress combine disaster relief funding for Texas and a debt ceiling increase.

‘Our first priority is to make sure that the state gets money. It is critical, and to do that, we need to make sure we raise the debt limit,’ he said on Fox News.

Trump has not verbally endorsed Mnuchin’s proposal but he could do it today, Politico reported. White House officials have been pushing the idea behind the scenes.

Debt ceiling talks were gaining momentum Wednesday, even as the House went ahead with its standalone bill.

Democrats will make or break the Senate vote on Harvey aid, and they signaled this morning that they won’t pass a bill that’s decoupled from debt obligations.

Top Senate Democrat Chuck Schumer and ranking House Democrat Nancy Pelosi said in a joint statement that their caucuses would vote for the Harvey relief – but only if the bill included a three-month extension of the debt ceiling. 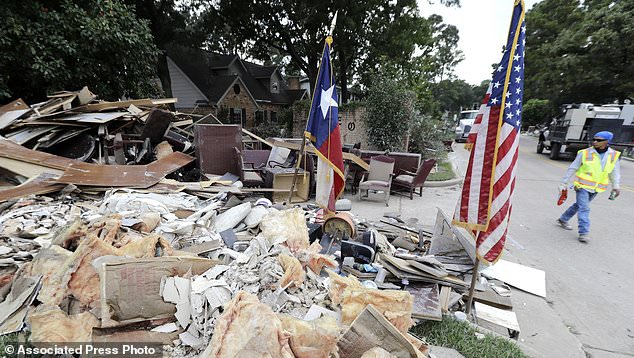 In this Sept. 5, 2017, photo, a worker walks past a pile of debris outside a business damaged by floodwaters in the aftermath of Hurricane Harvey in Spring, Texas. With federal disaster reserves running out, the House is moving to pass President Donald Trump’s request for a $7.9 billion first installment of relief for victims of Harvey

Ryan slapped down the proposed deal at a GOP leadership news conference that took place just before he was due to huddle with Schumer and Pelosi at the White House.

The Republican congressman accused them of ‘playing politics’ with Harvey aid and the debt ceiling.

‘I think that’s ridiculous and disgraceful,’ he said of the proposed three-month extension that would allow Democrats to demand extractions at the end of the year when the issue came back around.

Ryan said the offer is ‘unworkable’ and would put hurricane relief in ‘jeopardy.’

‘I think that’s a ridiculous idea. I hope they don’t mean that,’ he said.

Asked about the debt ceiling proposal during the meeting with congressional leaders later in the morning, though, Trump told reporters, ‘We’ll see.’

Pelosi’s office returned fire on Ryan just as the House leaders were sitting down with Trump to hammer out the details of a potential deal.

‘It appears that Speaker Ryan is the one playing politics,’ Pelosi’s office said, noting that Ryan wouldn’t oppose tying Harvey aid to the debt limit if the time frame was longer than three months.

The statement went on to say, ‘The American people expect and deserve a plan from Republicans to avert a catastrophic default and ensure the full faith and credit of the United States.’

A spokesman Schumer said Tuesday that the New Yorker is seeking assurances that minority party Democrats will be treated fairly as Congress advances through its lengthy to-do list, which includes extending a popular children’s health program, federal flood insurance, and, perhaps, a small-bore budget outline that would ease tight budget ‘caps’ on both the Pentagon and domestic agencies. 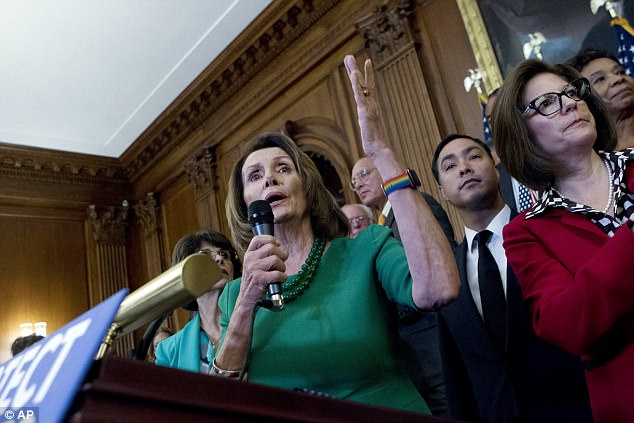 Top Senate Democrat Chuck Schumer and ranking House Democrat Nancy Pelosi, pictured, said in a joint statement that their caucuses would vote for the Harvey relief – but only if the bill included a three-month extension of the debt ceiling 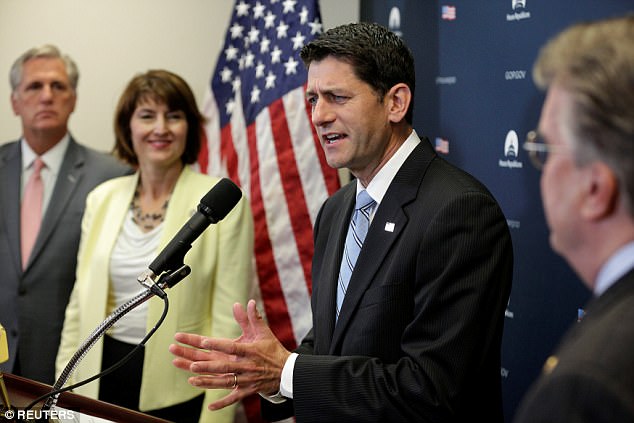 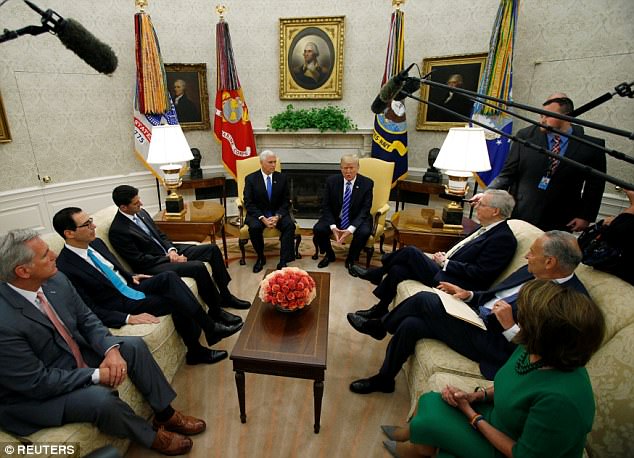 Asked about the debt ceiling proposal during the meeting with congressional leaders later in the morning, though, Trump told reporters, ‘We’ll see’

Schumer was a key force in winning aid of more than $50 billion to help New York and New Jersey recover from Superstorm Sandy five years ago. And he supported former President Barack Obama’s successful efforts in recent years to block Republicans from using debt limit increases as blackmail to win other GOP priorities.

So Schumer is keeping his options open despite initially acting cool to the idea of pairing the debt limit with flood funding.

‘In the case of the debt limit, we need to act quickly given the new uncertainty from the large costs of storm recovery,’ McConnell said.

Conservatives inside and outside Congress are staunchly opposed to a debt ceiling increase in any case. Rather than raise the cap on borrowing, they believe in spending cuts.

‘I think it’s a terrible idea,’ said House Freedom Caucus Chairman Mark Meadows, R-N.C., who conceded that conservatives were getting outmaneuvered in his comments on Tuesday.

But Meadows admitted, ‘I think at this point there are bigger issues that we have to focus on.’

Rank and file Democrats recognize that their votes are needed to help GOP leaders pass any debt limit increase but they weren’t threatening to withhold those votes on Tuesday.

‘We’re dealing with all these things at this point in time anyway,’ said House Democratic Caucus Chairman Joe Crowley of New York. ‘Democrats have said we’re for a clean debt ceiling and we’re also for making sure the people from Texas, Louisiana, and elsewhere who’ve been severely damaged by these storms – with one more on the way as well – that their needs need to be addressed as well.’

That was before Pelosi and Schumer demanded a short-term debt limit increase, however.