Harvey Weinstein limped into court without his walker on Wednesday ahead of opening statements in his landmark rape and sexual assault trial, in a case that has become a watershed moment for the #MeToo movement.

Prosecutors will begin presenting their arguments against the movie mogul to a jury of seven men and five women, with the once-powerful Hollywood producer facing life in prison if convicted.

Though dozens of women have accused Weinstein of sexually harassing or assaulting them over the years, his New York trial involves just a pair of allegations – that he raped a woman in a Manhattan hotel room in 2013 and sexually assaulted a different woman in 2006.

Weinstein, 67,  who reshaped the independent film industry with critically acclaimed pictures such as ‘The English Patient’ and ‘Shakespeare in Love,’ has pleaded not guilty and and said any sexual encounters were consensual.

His trial began on January 6, with jury selection taking two weeks, and could last roughly six more. He had arrived at court everyday using his walker complete with tennis balls – a necessity, his team said, following back surgery.

On Wednesday he was supported by his defense team as he made his way into the court without it. An aide carried his walker nearby as Weinstein hobbled into court, held up by an associate.

Since 2017, more than 80 women have accused Weinstein of sexual misconduct, fueling the #MeToo movement in which women have gone public with allegations against powerful men in business, entertainment and politics. 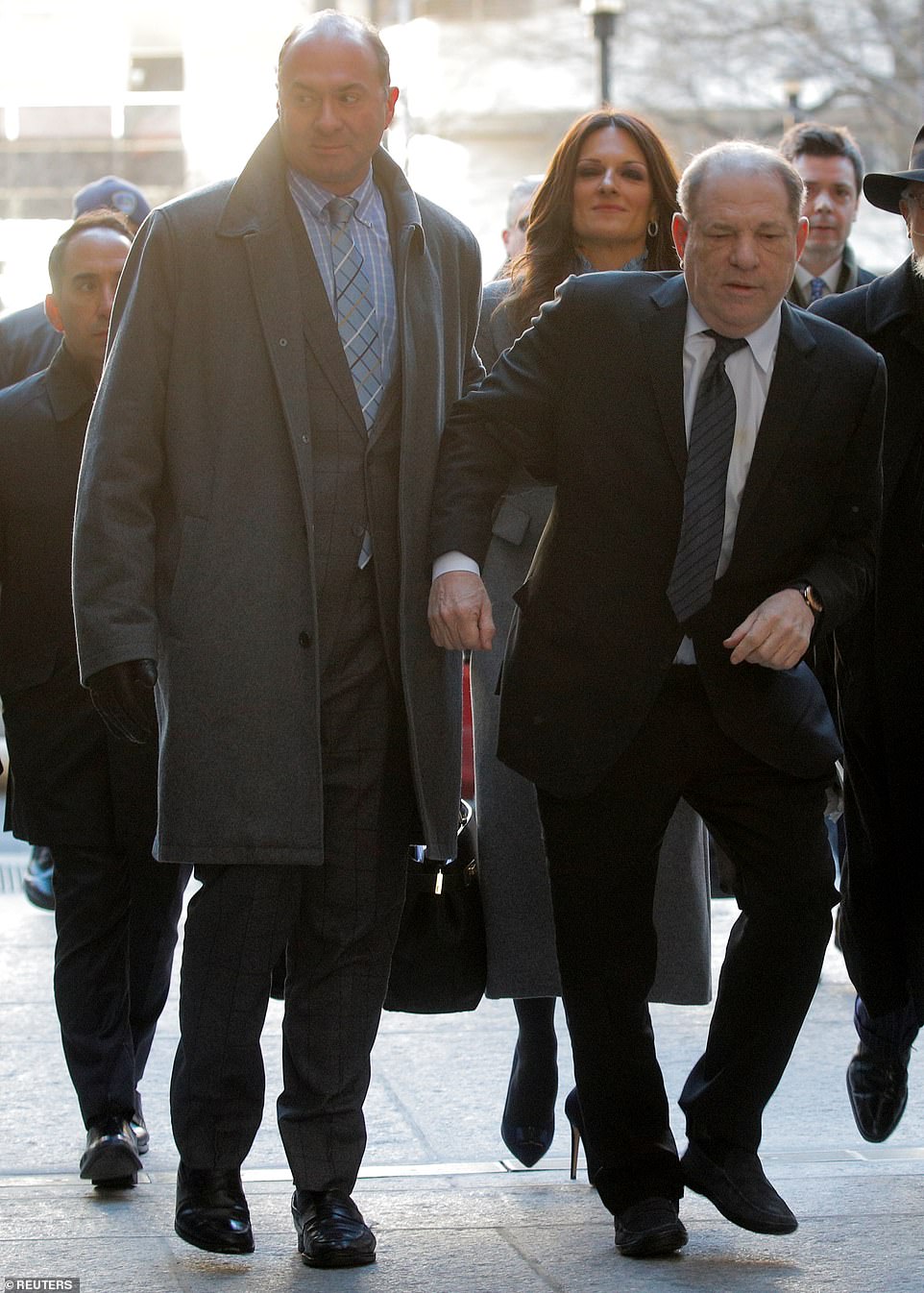 Weinstein had arrived at court everyday using his walker complete with tennis balls – a necessity, his team said, following back surgery. On Wednesday he was supported by his defense team as he made his way into the court without it 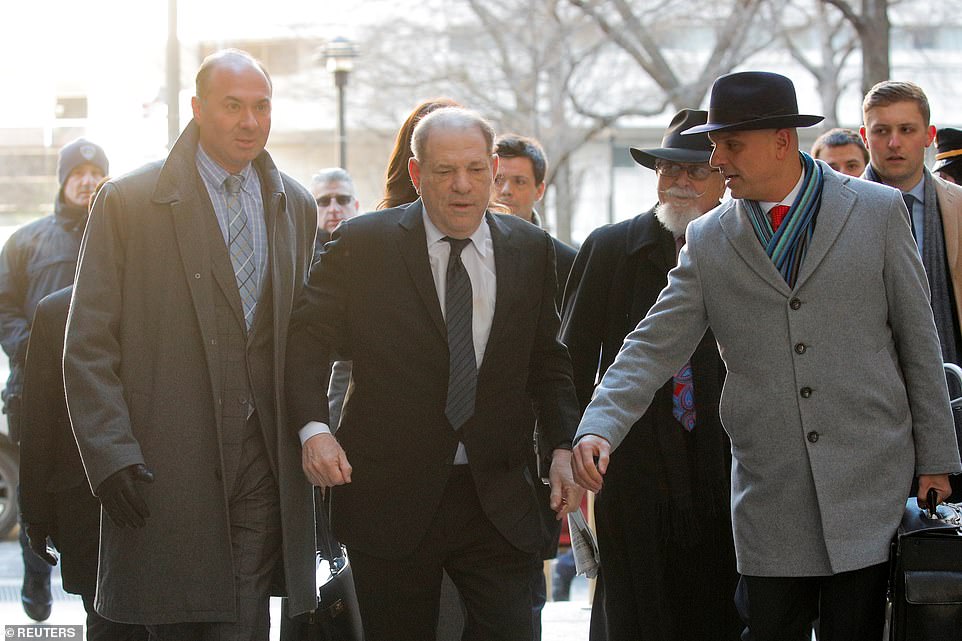 18 people must be selected to make up the jury of 12 and six alternates.

So far, that number includes;

Justice James Burke told potential jurors last week that they must decide Weinstein’s case based on the evidence and not make the trial ‘a referendum on the #MeToo movement.’

Burke denied a request on Tuesday to move the trial out of the media glare of New York City to the suburban county of Suffolk or the state capital Albany. The defense team sought a new venue partly because sidewalk protests against Weinstein could be heard in the court.

‘While I could not make out every word of what was being chanted, I clearly heard the word ‘rapist’,’ said a court filing by Weinstein lawyer Diana Fabi Samson, describing the protests that she heard from inside the court during jury selection.

Adding to the drama, actor Cuba Gooding Jr. is due at the same courthouse Wednesday for a hearing in a case in which several women have accused him of groping. He’s denied all allegations of wrongdoing.

Prosecutors are expected to paint Weinstein as a serial predator who abused his power, while the defense is expected to try to show accusers’ behavior seems to contradict how victims would react to an assault.

One of the two main accusers in the Weinstein case, former production assistant Mimi Haleyi, has said publicly that Weinstein forced oral sex on her in his Manhattan home in 2006. The other, who has not been identified, was raped by Weinstein in 2013, alleges the Manhattan District Attorney’s office, which brought the case. 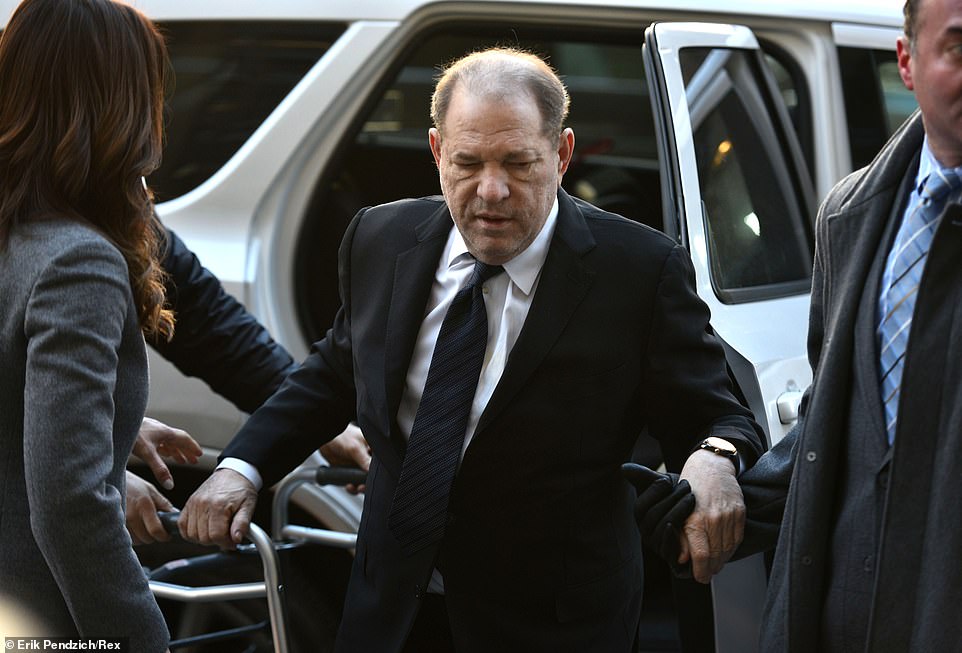 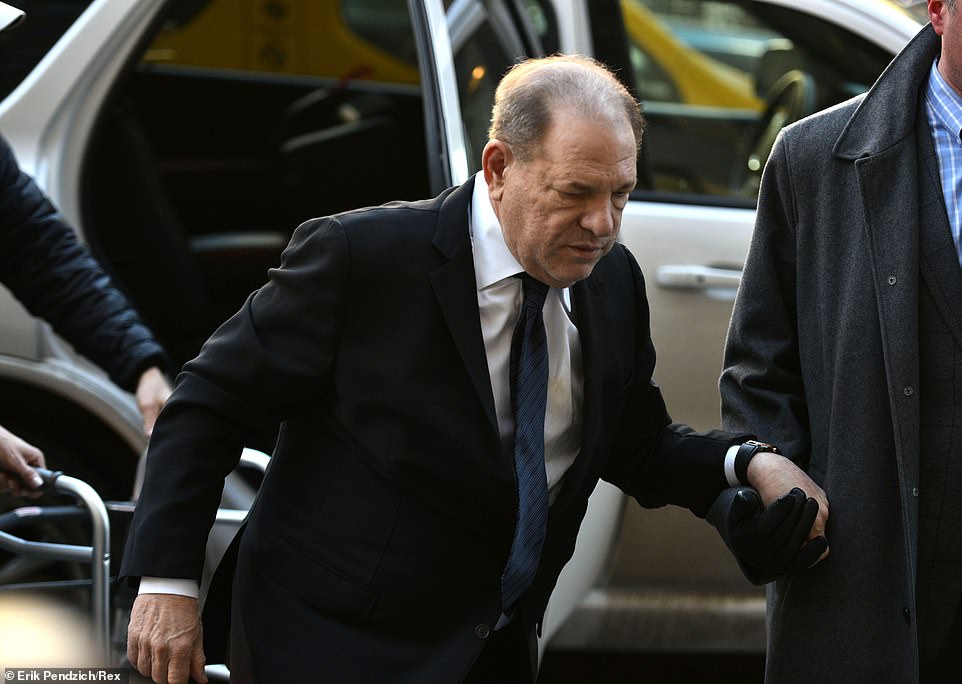 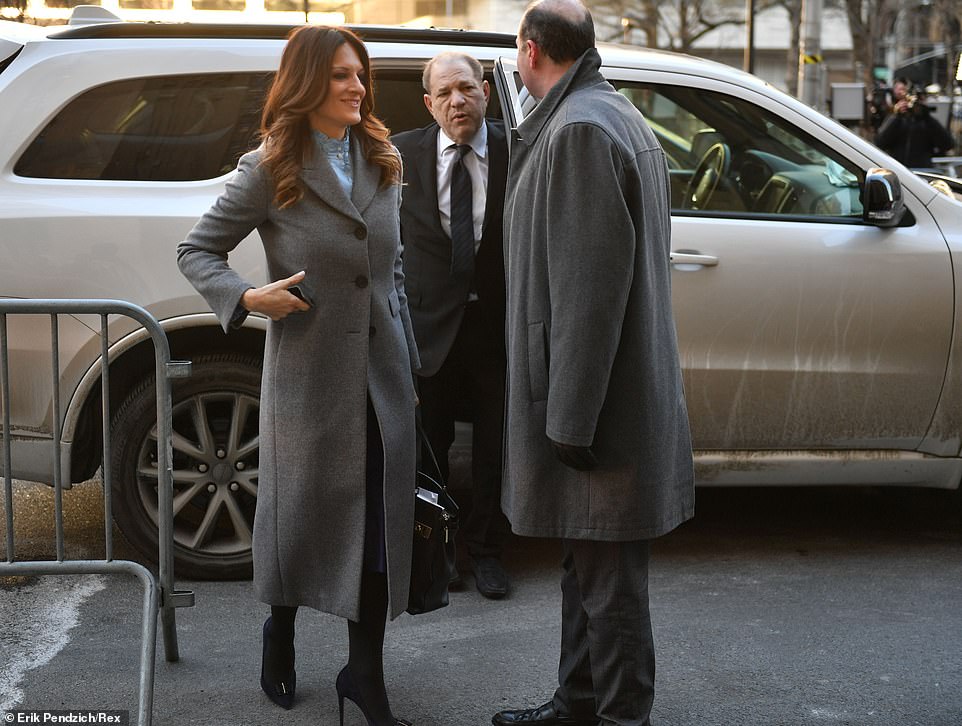 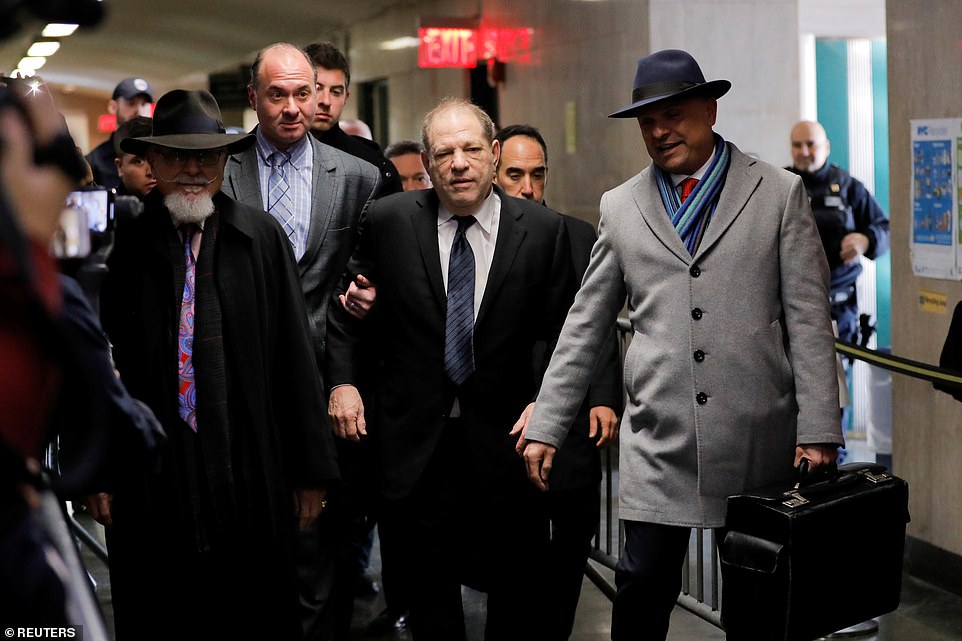 Weinstein, 67, who reshaped the independent film industry with critically acclaimed pictures such as ‘The English Patient’ and ‘Shakespeare in Love,’ has pleaded not guilty and and said any sexual encounters were consensual 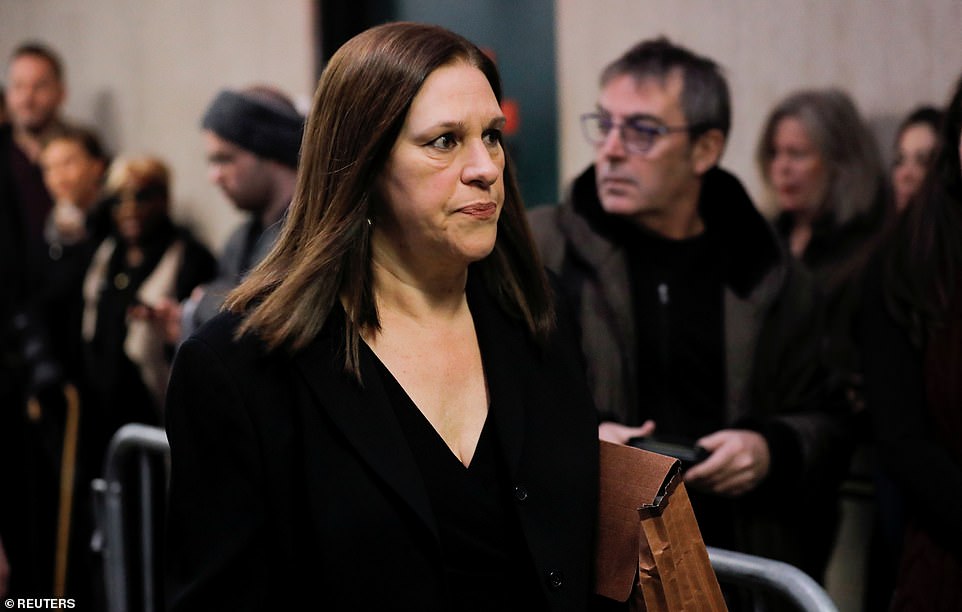 The prosecutors further allege that Weinstein raped another woman, actress Annabella Sciorra, in the 1990s. Although that allegation is too old to be charged as a separate crime, it will be presented to help establish Weinstein’s pattern of behavior as part of the case for predatory sexual assault.

State attorneys are expected to call up to three additional women, who are not mentioned in the charges, to bolster their case, according to court papers. A similar legal strategy helped Pennsylvania prosecutors convict comedian Bill Cosby in 2018 of sexually assaulting a Temple University employee.

Donna Rotunno, Weinstein’s lead lawyer, told Reuters earlier this month that the defense team would offer emails showing that Weinstein’s accusers had maintained friendly relationships with him after the alleged assaults.

Legal experts said lawyers for Weinstein could try to show that the accusers engaged in consensual sexual activity in order to gain an edge in the entertainment industry.

On Tuesday Damon Cheronis, one of the disgraced film producer’s attorneys, said his team plan to use a series of ‘devastating’ emails during opening statements before the jury. They would show that Weinstein’s accusers were actually in a ‘loving relationship’ with him and not the violent abuse they claimed, he said.

One accuser even gave Weinstein her new phone number and wanted to introduce him to her mother after he allegedly raped her, Cheronis told the court. 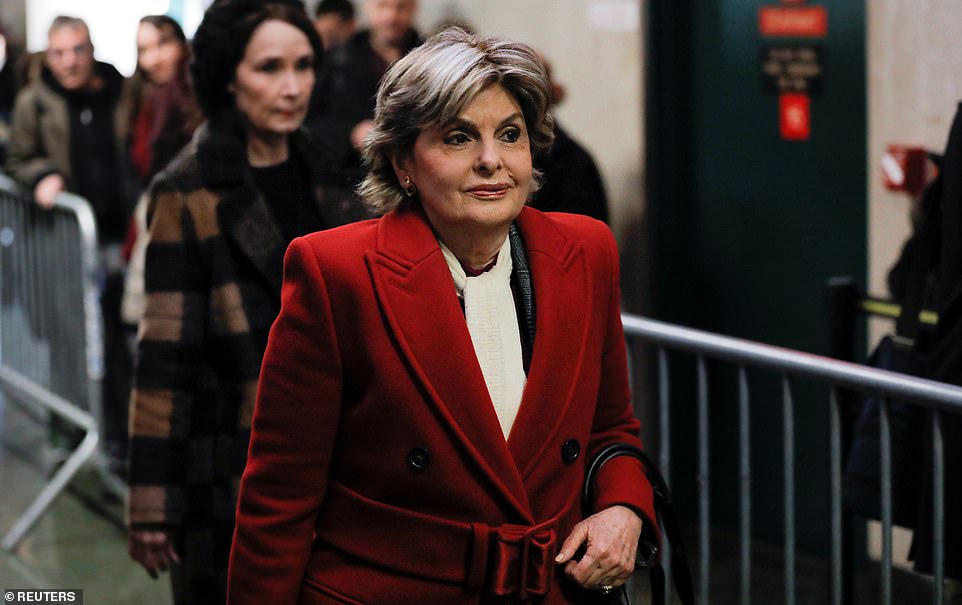 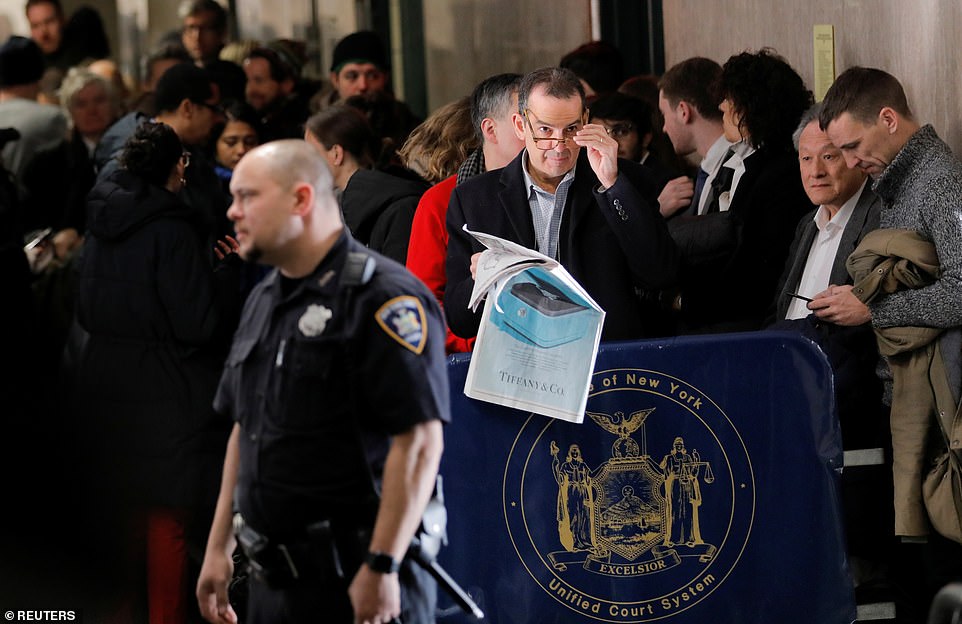 Prosecutors last week accused Weinstein’s legal team of trying to exclude white women from the jury, which is comprised of six white men, three black women, one black man and two white women. Weinstein’s lawyers countered that their goal was to select a fair jury, citing specific reasons for excluding the women.

The state needs a unanimous jury to convict. A single hold-out would produce a hung jury, although that would not prevent prosecutors from trying Weinstein again.

Regardless of the outcome, Weinstein faces additional charges in California.

Los Angeles District Attorney Jackie Lacey announced on Jan. 6 that Weinstein had been charged with raping one woman and sexually assaulting another in 2013.

He is also facing civil lawsuits. While lawyers representing at least 28 women have agreed to a proposed $25 million settlement of those civil claims, a lawyer for one woman has criticized the deal as unfair.

Opening statements begin on Wednesday in the rape trial in New York of Harvey Weinstein, once one of Hollywood’s most powerful producers. He has pleaded not guilty to charges of rape and criminal sexual assault.

Weinstein is accused of sexually assaulting production assistant Mimi Haleyi, pictured, in 2006 and raping another woman in 2013

Who are the accusers?

Actress Annabella Sciorra, best known for her role on HBO’s “The Sopranos,” has said Weinstein raped her in her Manhattan apartment in 1993.

Prosecutors have accused Weinstein of raping another woman in March 2013 in Manhattan. She has not been publicly identified.

What are the charges?

Who will testify against Weinstein?

Haleyi, Sciorra and the 2013 accuser are almost certain to testify in a trial that could last until early March.

Prosecutors may also call three other women to testify about encounters with Weinstein, even though he is not formally charged with crimes against them. Their testimony is intended to bolster the charges by showing that Weinstein had a consistent pattern of behaviour.

Prosecutors have also said that they expect to call Barbara Ziv, a professor at Temple University in Philadelphia, to testify as an expert on the trauma resulting from sexual assault. 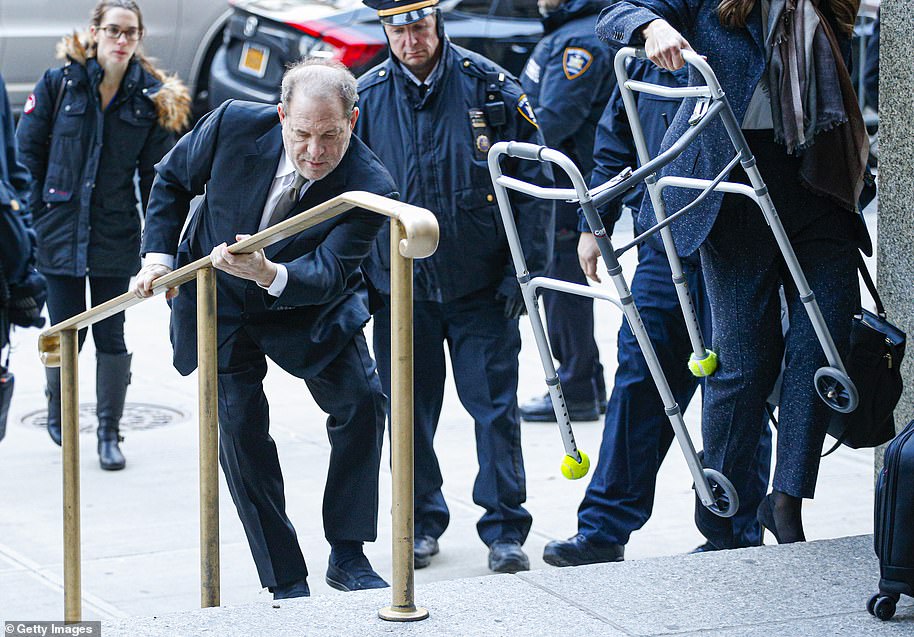 What is Weinstein’s defense?

While criminal defendants and their lawyers typically avoid revealing their strategy before trial, Weinstein has dropped some hints.

Weinstein’s lead lawyer, Donna Rotunno, has told Reuters that Weinstein had a “slew of witnesses ready to go.” She has said the defence would be introducing emails and text messages to prove that Weinstein’s accusers maintained relationships with him after his alleged assaults.

His lawyers have also said they plan to call psychologist Deborah Davis of the University of Nevada, Reno, to testify as an expert on memory, suggesting that Weinstein may try to call his accusers’ recollections into question.

What other legal risks does Weinstein face?

Even if he is acquitted in Manhattan, Weinstein faces separate criminal charges announced on Jan. 6 by prosecutors in Los Angeles. Lawyer Rotunno declined to make an immediate comment on those charges.