Harvey Weinstein is appealing against a judge’s ruling that luring an aspiring actress to his hotel room with the false promise of film roles in exchange for sex could constitute sex trafficking.

Weinstein’s request for an immediate appeal would mark a break with usual court process if it is granted. Typically a case has to be heard and a decision given before it can be appealed. 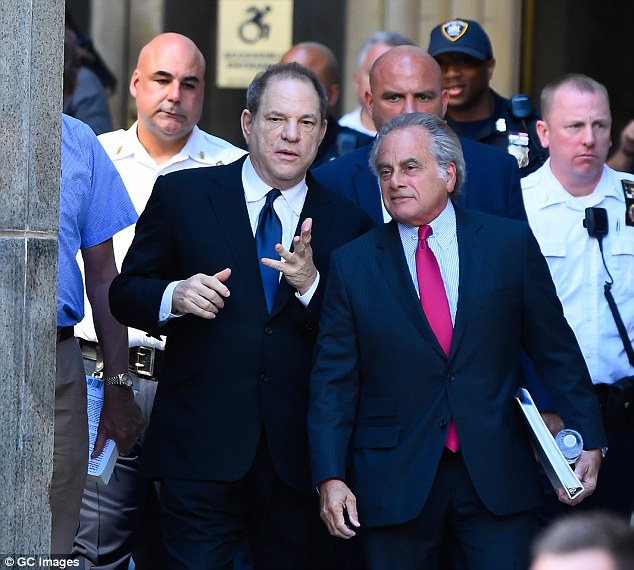 Earlier this month a New York judge rejected Weinstein’s first attempt to have the case thrown out, saying that luring an actress to a hotel room with a false promise of film roles in exchange for sex could constitute trafficking

Sweet’s opinion does not represent a final ruling in the case, but simply allows it to progress on to the next stage.

Noble’s case has been followed by a German actress using the pseudonym Emma Loman, and Weinstein’s lawyers say more will follow if the ruling is allowed to stand.

Weinstein’s lawyers said that Noble’s ‘belief that she might receive something of value,’ including a potential film role, ‘does not meet the standards required to prove he engaged in a commercial sex act’, Page Six reports.

The actress claimed Weinstein set up the encounter a year before in London, when he told her that he ‘had a role in mind for her and that ‘it will be good for you,” reported the New York Post.

When they met in Cannes, the movie mogul asked Noble to meet him at Le Majestic Hotel to talk over her film reel.

But instead he started massaging her and told her walk up and down the room for an ‘audition’ before assaulting her in the restroom, the court heard. ‘Everything will be taken care of for you relax,’ Noble claimed he said. Judge Sweet ruled Weinstein’s behavior could fall under the federal definition of sex trafficking, explaining that previous courts had applied it to ‘defendants who have lured women, under false pretenses, with lucrative promises for sexual purposes’.

‘Here the pattern of behavior … alleged a knowing and understanding that Harvey would use fraudulent means to entice Noble to engage in a sex act with him,’ he added.

The judge cited evidence that Weinstein had promised Noble a film role and said ‘everything would be taken care of’.

He also noted that, for an actress, the mere fact of meeting a world-renowned film producer carries value.

‘The opportunity, moreover, for the actress to sit down with that producer in a private meeting to review her film reel and discuss a promised film role carries value that is career-making and life-changing,’ he said.

‘The contention, therefore, that Noble was given nothing of value – that the expectation of a film role, of a modeling meeting, of ‘his people’ being ‘in touch with her’ had no value – does not reflect modern reality,’ the judge continued.

He included a footnote at the word ‘reality’, citing sources that explain that the concept of the ”casting couch’ – in which aspiring actors and actresses are promised valuable professional opportunities in exchange for sexual favors – has been in the American lexicon for ‘nearly a century’.

Weinstein is already facing a second sex trafficking case brought by a German actress in the wake of Noble’s claim, and his lawyers warn that others will likely follow

Weinstein denies wrongdoing, and claimed through his lawyers that letting the lawsuit proceed to trial means sex trafficking laws now cover all sexual activity between adults when one person holds power and influence over the other.

Sweet said that even if the prospect of a film role, a modeling meeting or a continued professional relationship with Weinstein were not enough to constitute ‘things of value’ necessary under the sex trafficking statute, then her ‘reasonable expectation of receiving those things in the future, based on Harvey’s repeated representations that she would, is sufficient.’

Sweet also dismissed Weinstein’s brother Robert from the lawsuit, saying the prosecution had not convincingly argued he knew of his brother’s actions.

Weinstein’s lawyers Phyllis Kupferstein said: ‘This decision is just the first round, and merely finds that plaintiff has alleged enough to proceed with her case.

‘It does not mean that there is merit to the case. We will seek to appeal the decision. We believe these claims are not legally or factually supported, and ultimately will not be sustained.’