Author Ian McEwan was criticised yesterday for suggesting Harvey Weinstein could be the victim of a ‘mob’ and media circus.

While the disgraced film mogul seemed a ‘moral monster’, McEwan said he was withholding judgment about him until the case is heard in court.

Explaining his decision, the Atonement author said the public ‘don’t know what actually happened’ between the Hollywood producer and the women who have accused him of sexual assault and rape. 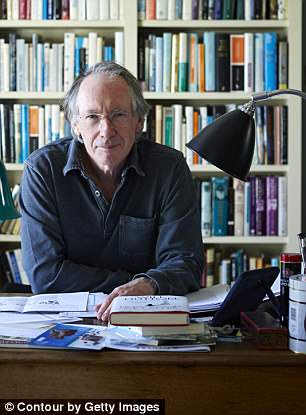 Author Ian McEwan (pictured, right) told Radio 4 that he encourages ‘a degree of scepticism’ amid the outcry over disgraced producer Weinstein (pictured, left)

Weinstein, 66, has been charged with rape and sexual assault. He was released on £750,000 bail after a New York court heard that he tried to ‘lure young women into situations where he could violate them sexually’. More than 80 women have gone public with claims of harassment or assault, including Gwyneth Paltrow, Angelina Jolie, Salma Hayek and Uma Thurman.

But speaking on Radio 4’s Today programme, McEwan, 69, said: ‘It seems a kind of circus to me. There is the media stuff, which we have to penetrate.

‘We don’t know what actually happened; it seems he is a moral monster who has had his comeuppance, but I always like to encourage in myself just a degree of scepticism once the whole mob is in full cry, so I am going to withhold judgments until I have heard the arguments in court.’

The writer was on the show to discuss his appearance at the Hay Festival in Wales in  which he spoke on potential collaborations between scientists and authors.

During the interview he spoke of the difference between literature and film, citing the grand extremes of Hollywood.

McEwan compared his own experiences in Hollywood to visiting the court of the notorious Borgia family.

He said: ‘It was like visiting the court, the mansion, of Cesare Borgia. You come away realising that whatever little fits and starts and upsets we have in the literary world, nothing is as grand and calculating on a huge scale as Hollywood.’

He was then asked if this could be seen in the allegations against Weinstein, following the producer handing himself in on Friday. 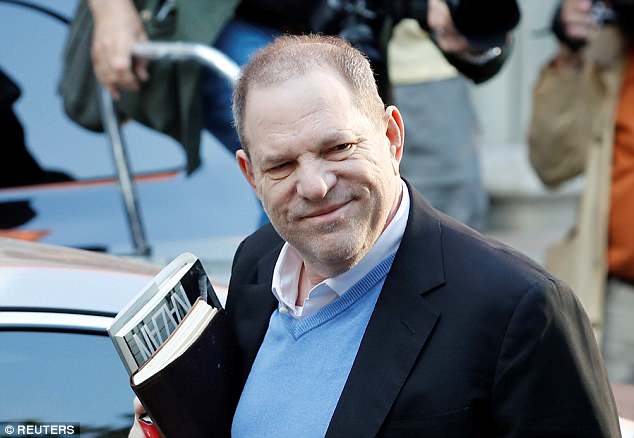 Weinstein is pictured handing himself in to police in New York, where he agreed to restrict his movements and handed in his passport

‘Oh the vanity of these men who think their every thought important And even by the low standards of this discussion, a defence of Weinstein is particularly egregious.’

Another wrote on Twitter: ‘Seriously disturbing to hear McEwan equating women citing Weinstein as an abuser with “mob mentality”.’

A third added: ‘An author of Ian McEwan’s stature knows exactly what “mob” connotes: A mass of wild, hysterical, uncivilized creatures with no good reason to be angry, pitchforks out and goodbye to reason and justice. That’s what we are, for stopping a serial rapist?’

However, other listeners defended McEwan, with one man writing: ‘Even Weinstein is innocent until proven guilty in a court of law, it’s disturbing that anybody who reminds people of this fact is attacked, the witch-hunt that is trial by media seems to be taking over the rule of law.’ 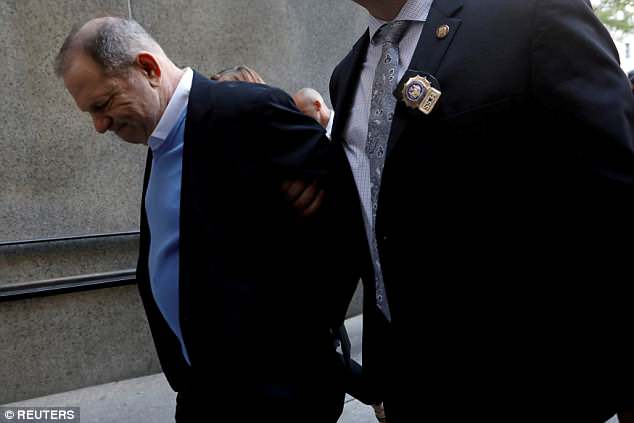 Weinstein has been charged with two counts of rape – one in the first degree and another in the third degree – and one count of a criminal sexual act for alleged incidents involving two separate women.

The charges follow an avalanche of accusations – including from some of Hollywood’s biggest stars – which first emerged last year, sparking the international MeToo and Time’s Up movements. On Friday, Weinstein handed himself in to police in New York.

He has repeatedly denied any allegations of non-consensual sex and intends to plead not guilty, his lawyer, Benjamin Brafman, said outside court.

Weinstein posted a one million US dollar (£751,060) cash bail and will wear an electronic monitor which tracks his movements 24 hours a day, seven days a week.

The 66-year-old also surrendered his passport and agreed to stay within the states of New York and Connecticut.