With Harvey Weinstein’s trial well underway, the disgraced movie mogul’s apparent mobility issues have drawn attention as he enters and exits the court in Manhattan.

Since the trial started on Wednesday, 67-year-old Weinstein has been seen using a variety of walkers, or sometimes no walker at all, as he comes to and from the proceedings. He had surgery on his back in December after being injured in a car crash in August 2019.

He has pleaded not guilty to charges of assaulting two women, and faces life in prison if convicted on the most serious charge, predatory sexual assault. His trial could last up to two months.

On Wednesday morning, he entered the court with aides holding his hands, and then exited with a ratty-looking hospital walker with tennis balls over the legs.

On Wednesday morning, Weinstein entered the court with aides holding his hands, shunning his walker 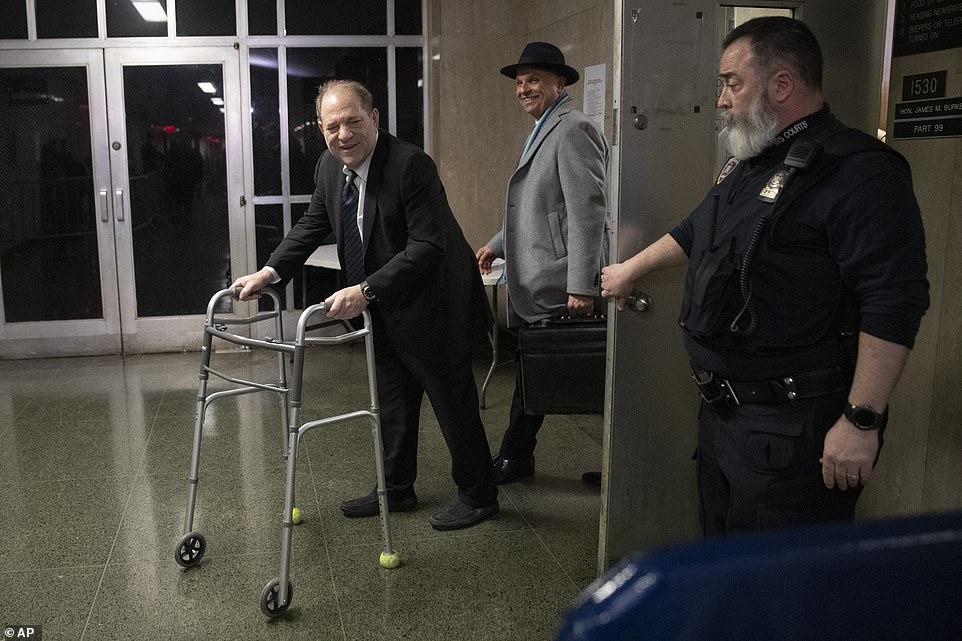 On Thursday, Weinstein was supported under his arms by two men as he shuffled into the courthouse, and exited with a snazzy Drive-brand wheeled walker with built-in seat, which retails for more than $200.

On Friday, he both entered and exited the courthouse with the Drive walker.

Weinstein continues to struggle up the stairs to the courthouse, with assistance from his entourage at times as he clings to the banister.

A disabled access ramp is just yards away but is positioned in front of a media pen.

Weinstein’s spokesman told DailyMail.com he also uses the stairs ‘to exercise his back and for a quicker route in’ as well as to avoid walking past the press. 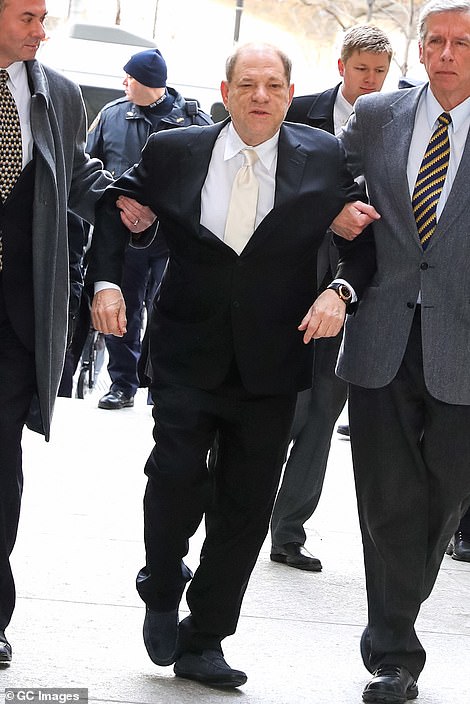 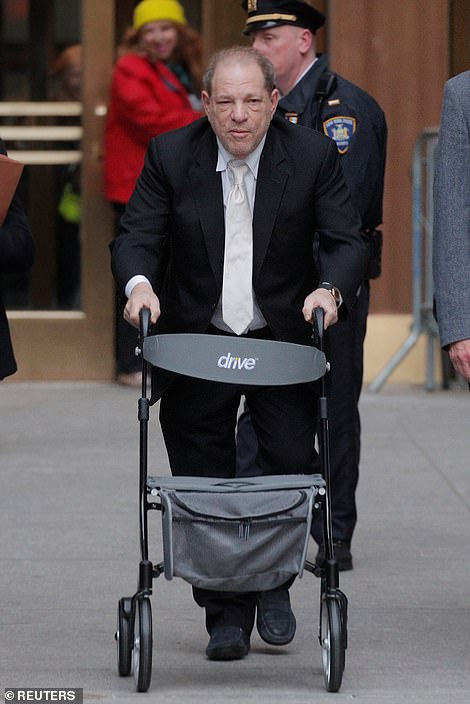 On Thursday morning (left), Weinstein was supported under his arms by two men as he shuffled into the courthouse, and he exited that night (right) with a snazzy Drive-brand wheeled walker with built-in seat, which retails for more than $200 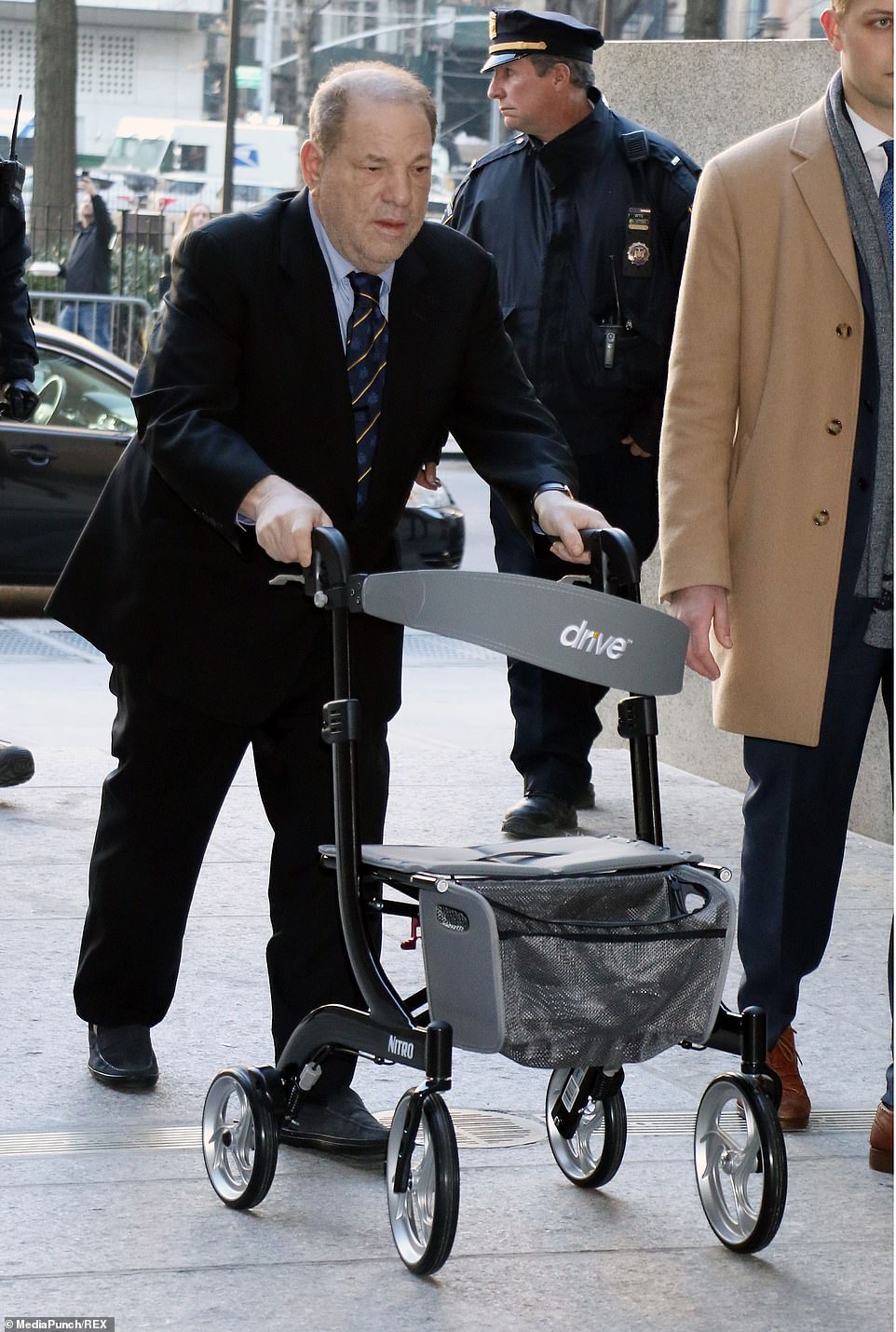 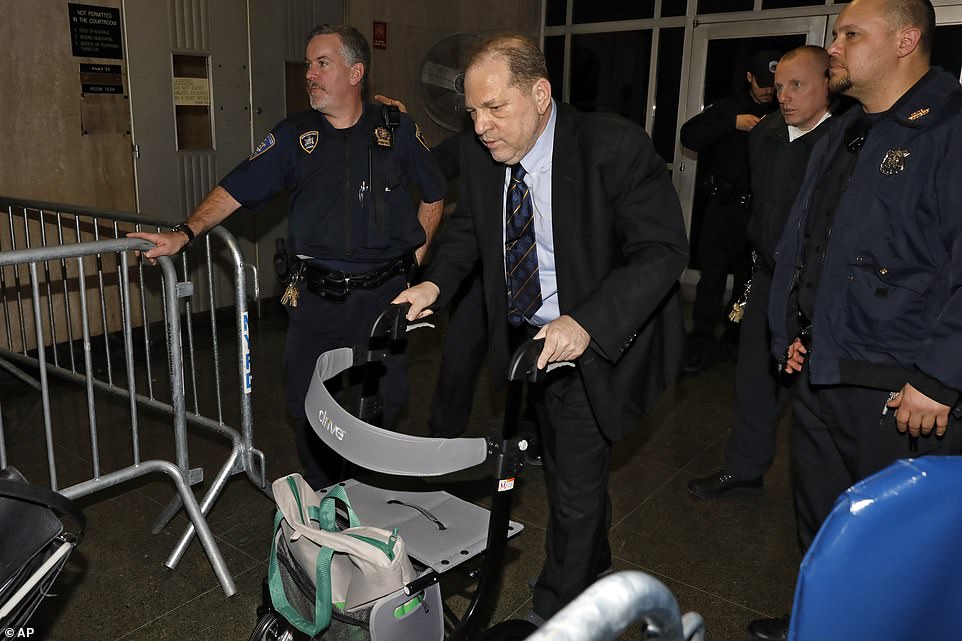 On Friday night, Weinstein continued to use the fancy wheeled scooter that has become his favored mobility aid

The spokesman said last week: ‘He is able to [use the disabled access ramp] but he choose not to.

‘It is a longer walk and it goes right past the media, he has to pass by the media to get there. This way he gets to the building faster.

‘It is also good for him to exercise his back in the wake of his surgery. He needs to strengthen it to the point where he does not have to use the walker. It’s a mindset, walking up the stairs pushes and challenges him.’

The spokesman could not confirm a date when Weinstein is expected to not use his walker.

A New York courts spokesman told DailyMail.com: ‘The ADA compliant handicapped ramp in front of the Criminal Court Building at 100 Centre Street was recently renovated and fully accessible. Whether or not an individual chooses to use it is their choice. Mr. Weinstein is free to avail himself of its use.’

On Friday at the trial, actress Rosie Perez took the stand to bolster the account of friend and fellow actress Annabella Sciorra, who said she was raped by the former Hollywood producer in the early 1990s. 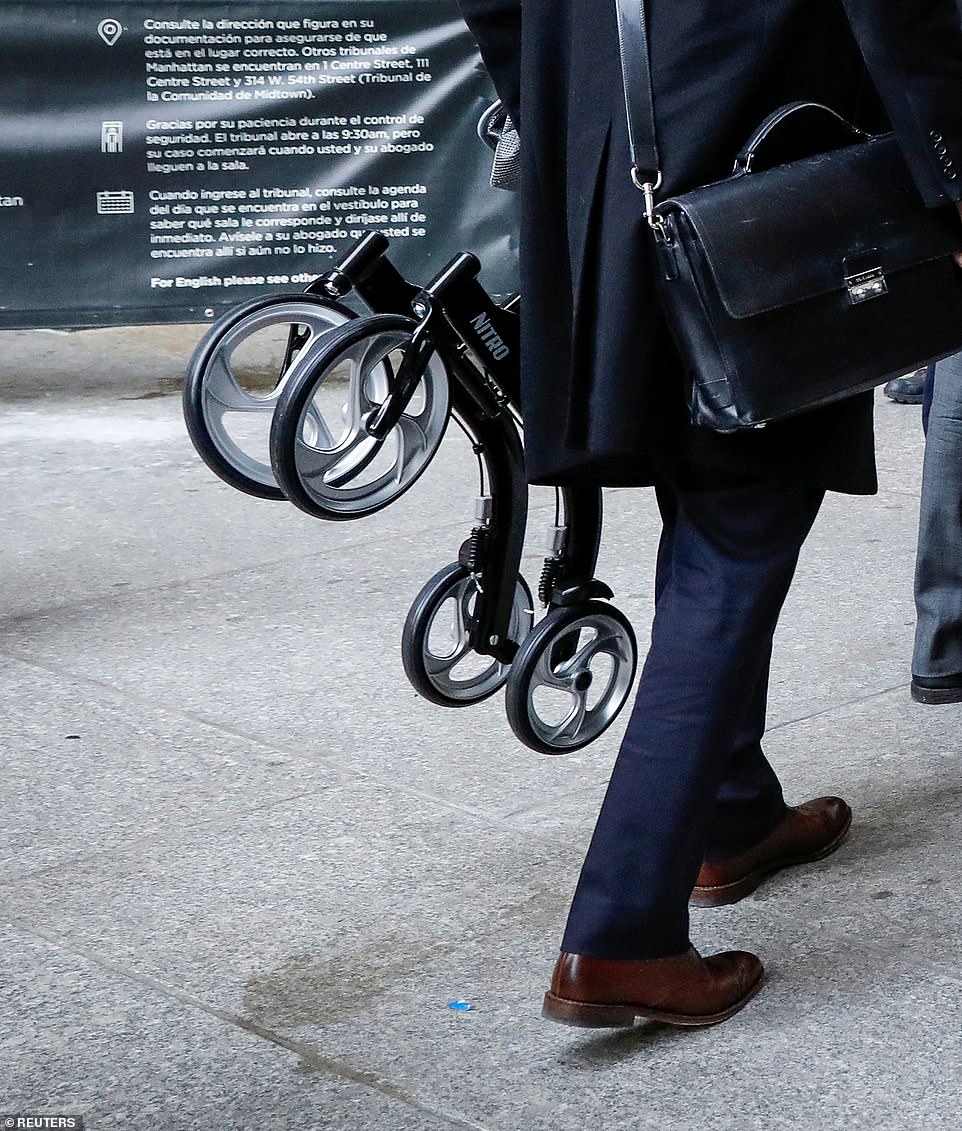 Perez, whose film credits include Spike Lee’s ‘Do the Right Thing,’ told jurors that Sciorra shared details of the alleged assault, including that Weinstein had pinned her arms above her head as he raped her.

Weinstein has pleaded not guilty to sexually assaulting two other women, Mimi Haleyi and Jessica Mann.

Sciorra, who appeared in ‘The Sopranos,’ testified on Thursday that Weinstein violently raped her more than 25 years ago.

While that allegation is too old to support a separate rape charge against Weinstein, prosecutors hope it will show that he is a repeat sexual predator – the charge that could put him in prison for life.

Since 2017, more than 80 women, including many famous actresses, have accused Weinstein of sexual misconduct.

The accusations fueled the #MeToo movement, in which women have accused powerful men in business, entertainment, media and politics of sexual misconduct. Weinstein’s trial is widely seen as a watershed moment for the movement. 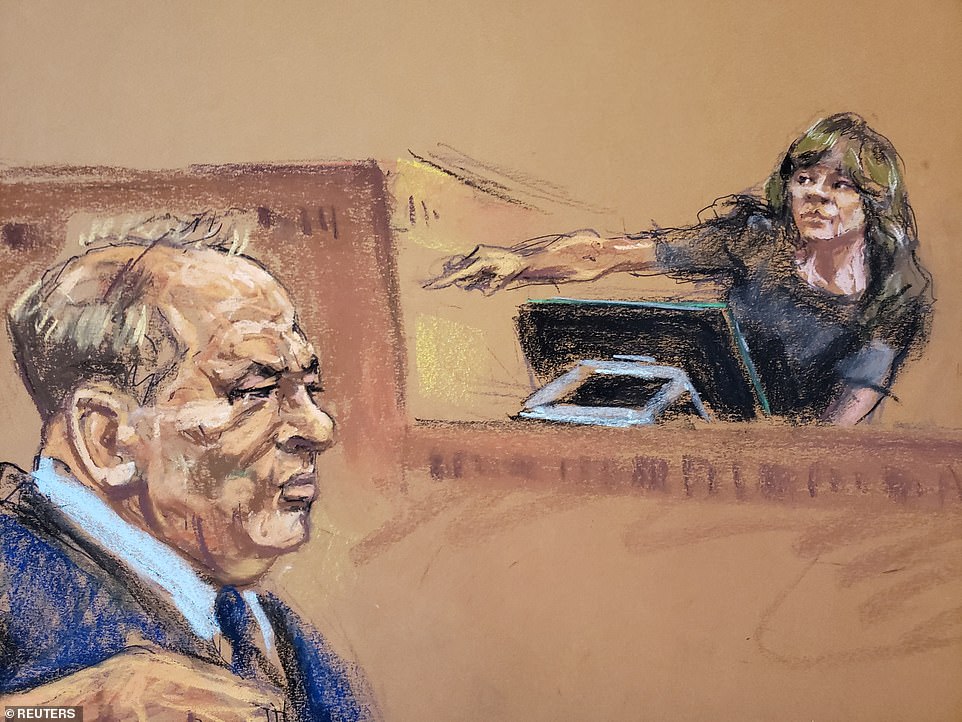 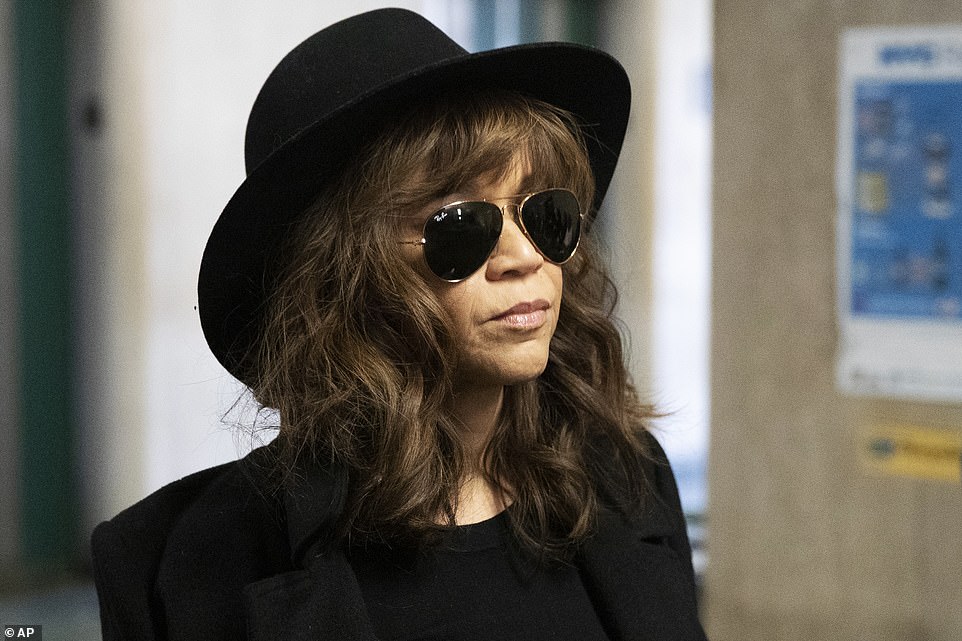 Weinstein has denied any nonconsensual sex, and his lawyers said in opening statements on Wednesday that emails from his accusers would show they maintained warm relations with him after the alleged attacks.

Perez, testifying for the prosecution, said she called Sciorra one night to invite her to go out, but Sciorra answered in a ‘strange whisper of a voice.’

When she asked Sciorra what was wrong, Sciorra answered, ‘I think something bad happened. I think I was raped.’

Perez testified that when she asked Sciorra who had raped her, Sciorra said only, ‘I can’t, I can’t.’

Months later, Perez said, she heard rumors that Weinstein was stalking Sciorra in London and concluded he was the rapist. Perez said she called Sciorra, who confirmed her suspicion.

Perez said she urged Sciorra to go to the police, but Sciorra refused, saying, ‘He’d destroy me.’

Weinstein lawyer Damon Cheronis cross-examined Perez, pressing her about the details of her first phone call to Sciorra and asking her whether she went to check on her friend after the conversation. 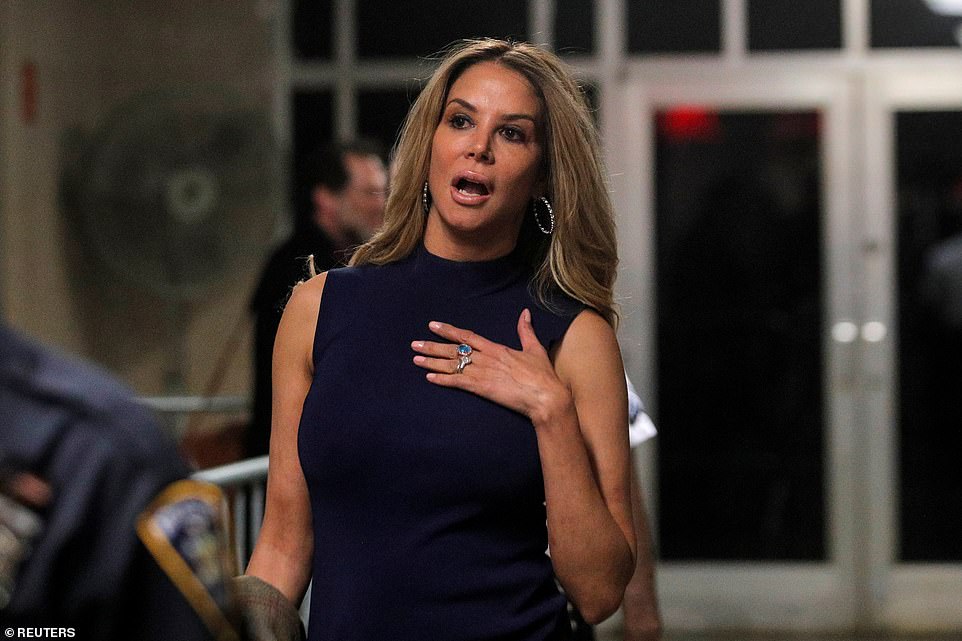 Perez said she had not.

Earlier Friday, forensic psychiatrist Barbara Ziv testified as an expert for prosecutors about why some sexual assault victims do not report attacks or avoid their abusers.

Ziv said most victims of rapes and sexual assaults know their attackers, do not fight back during the attacks, and many maintain relationships with their attackers.

‘They’re hoping that this was just an aberration,’ said Ziv, who teaches at Temple University in Philadelphia. Her testimony could help prosecutors show jurors why some women who have accused Weinstein of sexual misconduct might have stayed in contact with him after it occurred.

On cross-examination, Cheronis asked Ziv if a woman could view a consensual encounter years later as nonconsensual because she had come to regret it.

‘Anything is possible,’ Ziv answered, though she said it was not the norm.