Has a space age spa in Churchill’s wine cellar really found the secret to longer life?

Last week I was cycling through the Costa Rican jungle. I could have gone to Venice, LA or New York, but the lush, green jungle appealed more. As I meandered between the trees, my favourite podcast playing in my ears, I knew I’d made the right choice.

After a gentle half-an-hour ride, I glanced at the calorie counter to see I’d burned 1,300 calories and I slowed to a halt.

Despite the impressive calorie count and the rainforest surroundings, I haven’t even broken a sweat. So I skip a shower, bound up the stairs and emerge into the bright lights and bustle of London’s Mayfair.

Welcome to Bellecell, a futuristic clinic deep beneath London’s most exclusive streets, in what was once Winston Churchill’s wine cellar.

Fiona golfar (left) at the BelleCell Clinic, a futuristic clinic deep beneath London’s most exclusive streets, in what was once Winston Churchill’s wine cellar

These days, there’s no Chateau Margaux down here. Instead, an entirely different cocktail is on offer – a heady blend that includes a super-charged exercise bike that combines infrared and vacuum technology to boost calorie burn, and lets you choose a virtual location for your ride, too.

But that’s just the start. Bellecell Regeneration Clinic, which opened earlier this year in a discreet alley behind the Ritz Hotel, has positioned itself at the forefront of the £14 billion beauty and wellness industry.

It’s a cutting edge re-imagining of the traditional day spa. Inside it feels like a subterranean spaceship. On the menu, guests will see facials and massages with futuristic twists.

Massages aren’t conducted by masseuses on tables, but in zero-gravity chairs where you lie back, slide your arms and legs into special sleeves and let little air jets pummel away at your cellulite. It’s so relaxing, you feel like you’re floating – hence the ‘zero-gravity’ name. 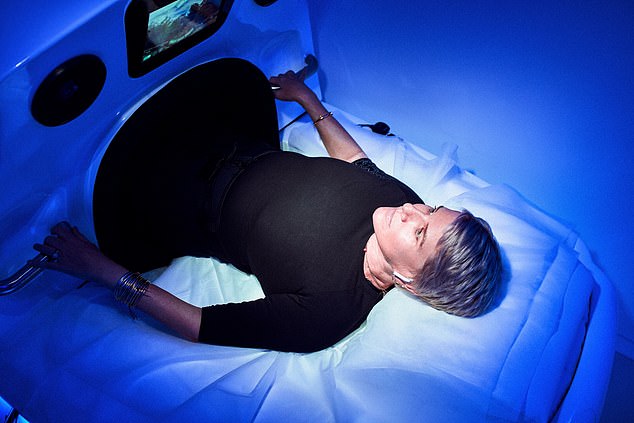 Massages aren’t conducted by masseuses on tables, but in zero-gravity chairs where you lie back, slide your arms and legs into special sleeves and let little air jets pummel away at your cellulite

Then there are oxygen chambers – not for the claustrophobic – where you lie serene in a mini coffin while pure oxygen is pumped in to refresh you. Elsewhere, there are infrared intravenous drips, muscle-stimulating bodysuits and helmets to massage your pressure points. And, of course, the horizontal ‘bike’ that transports me to the jungle.

This is the world of ‘biohacking’.

It may sound space-age – and frankly rather scary – but put simply, biohacking is the fashionable new term for using technology to help us look and feel better… and live longer.

This isn’t a new concept. After all, laser eye surgery is ‘biohacking’, as are breast implants and filler jabs.

But this is the first time it has been combined with health and wellness in a single futuristic clinic. The aim is to use technology to ‘biohack’ our way out of the brain fog, bloating, lack of energy, poor concentration and emotional ups and downs that plague us all from time to time. 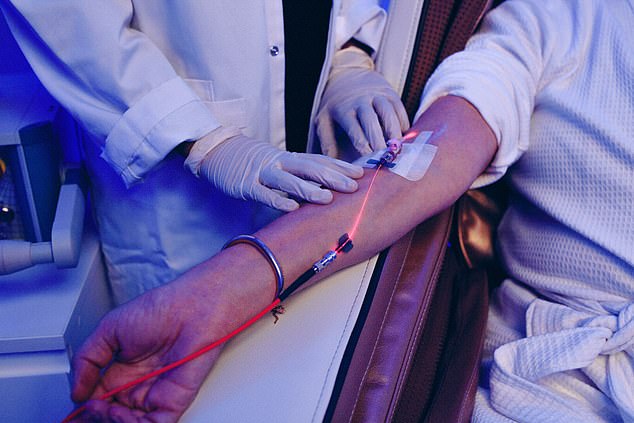 Elsewhere, there are infrared intravenous drips, muscle-stimulating bodysuits and helmets to massage your pressure points. And, of course, the horizontal ‘bike’ that transports me to the jungle

And that’s exactly why I’m here.

At 57, like so many busy women, I often find myself exhausted – and that’s before I’ve got to the gym.

I had just been diagnosed with stomach ulcers brought on by the ibuprofen I’ve been taking following a shoulder operation. My exercise regime had gone from swimming and pilates three times a week to just the odd pilates or yoga class while I waited for my shoulder to heal.

I felt run down and found myself eating more to compensate. I wanted a reboot.

If anyone should have the answers, it should be me. I spent years as editor-at-large for Vogue magazine and have tried more diets, spas and bootcamps than most people ever will. I’m also usually pretty sceptical of anything claiming to be a quick fix. Can it really make you look younger, feel better and live longer?

It had to be worth a shot. 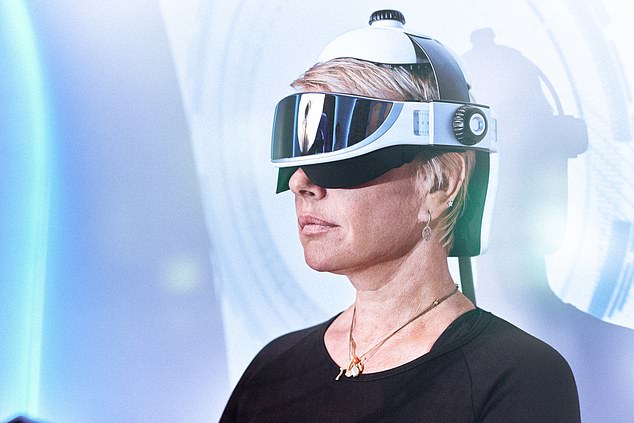 I had just been diagnosed with stomach ulcers brought on by the ibuprofen I’ve been taking following a shoulder operation. My exercise regime had gone from swimming and pilates three times a week to just the odd pilates or yoga class while I waited for my shoulder to heal

With a price tag of £2,000 for the full works – the blood tests, diagnostics and exercise machines – it’s not cheap, but I’m intrigued by the science. I first sit down with the clinic’s resident doctor, Shanika Gunasinghe, to discuss my goals.

The first step is analysis – a comprehensive blood and stool test, and a 3D body scan that sees me standing on a rotating turntable while what seems like millions of measurements are taken.

Further tests measure fat, water content and muscle percentage and, finally, I am asked to breathe into a Silence Of The Lambs-style mask for 30 minutes in order to calculate how many calories I burn while resting.

A few days later, I return for the results. There’s good news and bad. Perhaps surprisingly, my fitness level is good, as is the fact that I have lower body fat than most women my age. With no need for drastic overhauls to my exercise routine, the clinic recommends some high-tech workouts which will give me the most fitness bang for my time buck – more on those later.

Yet while my blood tests don’t raise any medical red flags, the centre’s nutritionist seems to think I have a lot of issues.

My cholesterol is high, my blood sugar is high, my selenium (an essential mineral for metabolism and thyroid function) levels are low, I’m anaemic and my digestion is a mess. My immune system is exhausted. No wonder I’ve been feeling so low.

The nutritionist suggests I might be coeliac so I need to reduce my gluten intake. She recommends bone broths and good quality red meat to help my haemoglobin levels, and suggests swapping breakfast eggs for porridge as it will be kinder on my stomach.

As for the supplements – I’m told to take something called slippery elm to soothe my stomach, and fish oil for essential fatty acids.

With a meal plan to follow, I can get cracking with my new exercise routine. The clinic recommends two of their full body workouts that hit the spot for time-pressed women who want to make the most of their exercise hours.

First is that cycle through the Costa Rican jungle, or to give it its proper name, the ‘infrashape and vacuum pod’. I’m told to lie down on something that looks like an MRI machine, but this is altogether a more pleasant experience than anything you might find in a hospital. A perspex shell closes over my body from the waist down and I lie with my hands on the metal grips. Inside, my feet are on pedals, cycling. But as the machine starts up, an intense vacuum starts sucking on my legs. Meanwhile, an infrared light glows – the clinic claims it will boost fat loss and help to smooth any cellulite.

At the end of 20 minutes, I can’t believe I’ve burned 1,300 calories – that’s nearly twice the amount that you would burn in an hour-long spinning class. It seems too good to be true, but the clinic’s sports scientist insists the number is genuine.

The suit is connected to a computer programme and as I go through a basic workout every muscle I use tingles.

According to Haling, a 20-minute programme on an EMS machine is considered the equivalent of an hour-long work out in a gym.

My muscles – and my wallet – certainly feel it later that evening. These sessions – which can be bought individually for £90 a go – aren’t cheap and I only have the clinic’s word for the benefits. Like many women, though, I’m willing to pay to cheat my way to feeling better.

After that, I feel like I’m owed a massage. But this is no ordinary massage. As I recline in a ‘zero gravity chair’, it scans my spine to see how my back is aligned before raising little rollers and jets of air to pummel my back and shoulders.

If that is strange, it’s nothing compared to my next encounter.

I’m asked to dress up like an extra from Star Trek with a helmet and visor. This gently massages pressure points in my head and the back of my neck to release tension, while the eye mask blocks the light to help me relax.

Bellecell is the brainchild of Kasia Zajkowska, a startlingly glamorous 41-year-old Cambridge graduate, originally from Poland and now based in London.

Three years ago she capitalised on her degree in bioscience enterprise and molecular biotechnology and won over wealthy investors to create Bellecell, which was designed to meet the needs of wealthy, kale-munching women who don’t want to have to choose between their figure and their face after 50.

I ask Kasia which is her favourite treatment and she tells me it’s the hyperbaric oxygen therapy chamber – £160 a go. You lie in a pod as 100 per cent oxygen is pumped in. The oxygen boost to your blood increases stem cell production in 30 minutes, she claims. Afterwards, this blood is taken from you and injected into your face – the so-called ‘vampire facial’ favoured by celebrities. Kasia calls it a ‘beauty hug.’ The aim is to boost collagen production and smooth skin. I’ll pass, thanks.

So is it all worth it?

The treatments themselves varied in effectiveness: some, like the EMS and the InfraShape, I thought were brilliant; others like the zero gravity body massage chair were fun if you are the type of person who likes trying things out in an Apple store – but they aren’t going to change your life.

Although my initial tests won’t be repeated for six months, after just a few weeks I feel hopeful. I feel healthier and more sprightly than I did a month ago – I’m less sluggish and I feel like I’ve got my old oomph back.

I’m sticking to the nutritionist’s plan, and I can see and feel the changes. My muscles feel stronger, like they’re coming back to life, I feel more relaxed and my skin has a healthier glow.

But I’ve realised what I’m paying for isn’t just physical, it’s peace of mind, too. In a world where we always feel we could be doing more, and better, there’s satisfaction in knowing that what you’re doing has been calculated to give the greatest magnitude of change with the least effort.

As for what Mr Churchill would make of what has become of his wine cellar, I’m not sure. But I’ll raise a glass to its new incarnation.