Has the mystery of how the moon formed finally been solved?

It’s a question that has puzzled scientists for hundreds of years – how exactly did our moon form?

Since the 1970s, astronomers have suspected that the moon was created when a giant protoplanet called Theia struck Earth.

However, the nature of this collision and what happened immediately after has been subject to debate.

Some scientists believe that the collision created a vast cloud of debris, which coalesced into the moon over time.

However, in a new study, researchers from the University of Durham claim that the giant impact immediately placed the moon into orbit around Earth.

Vincent Eke, co-author of the study, said: ‘This formation route could help explain the similarity in isotopic composition between the lunar rocks returned by the Apollo astronauts and Earth’s mantle.

‘There may also be observable consequences for the thickness of the lunar crust, which would allow us to pin down further the type of collision that took place.’

In a new study, researchers from the University of Durham claim that the giant impact immediately placed the moon into orbit around Earth (artist’s impression pictured)

Astronomers have long suspected that the moon was created when a giant protoplanet called Theia struck the newly formed Earth – a theory first put forward in the 1970s.

It says the huge collision created a vast cloud of debris, which coalesced into the moon.

However, until now, astronomers have not been able to explain how this left the moon and Earth chemically identical.

Later, two hypotheses arose that could explain why the moon is Earth’s chemical clone, but they predict radically different masses for Theia.

In one scenario, two half-Earths merged to form the Earth-moon system.

But the second hypothesis suggests Theia was a small, high-velocity projectile that smacked into a large and fast-spinning young Earth.

About 4.45 billion years ago, 150 million years after the solar system formed, Earth was hit by a Mars-sized object called Theia.

The collision created the moon, but debate has raged about exactly what happened during this event – and the question of why the moon and Earth are so similar in their composition has remained a mystery.

In the study, the researchers set out to explain the Moon’s origin story once and for all.

The team used the SWIFT open-source simulation code, run on the DiRAC Memory Intensive service (‘COSMA’), to create the most detailed supercomputer simulations yet.

This allowed them to simulate hundreds of different impacts, varying the angle and speed of the collision as well as the masses and spins of the two colliding bodies.

For example, only the high-resolution simulations produced the Moon-like satellite, and the extra detail showed how its outer layers were richer in material originating from Earth.

If much of the Moon formed immediately following the giant impact, this could mean that less material became molten during formation than previously thought, according to the researchers.

Depending on how this molten rock solidified, these theories should predict different internal structures for the Moon. 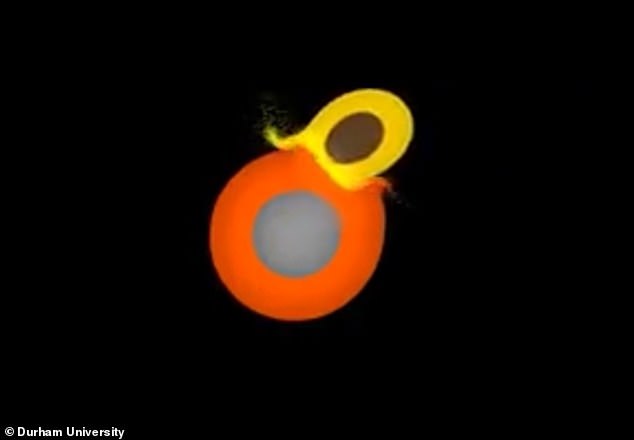 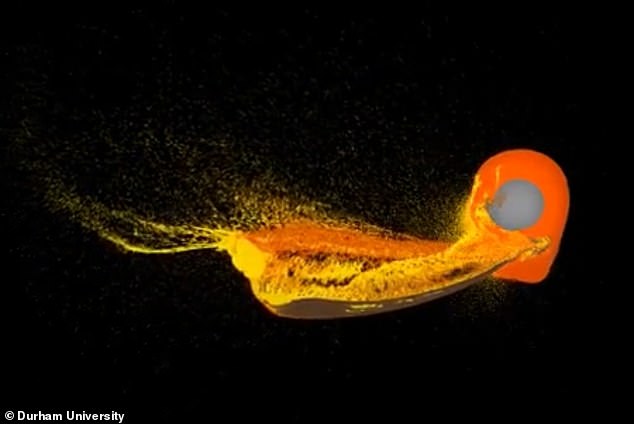 The computer simulations indicate that the collision formed the moon almost immediately, and went straight into orbit around Earth 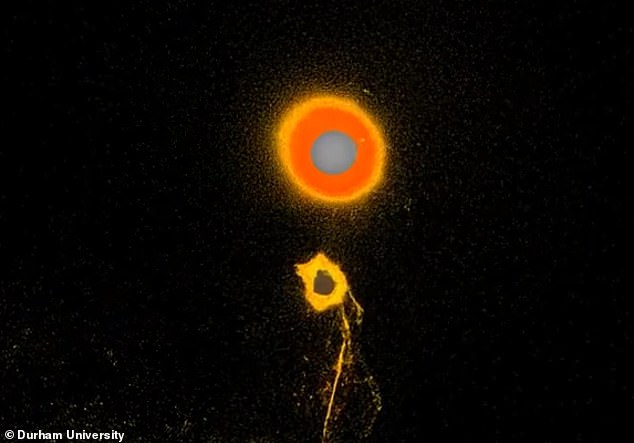 Jacob Kegerreis, who led the study, said: ‘This opens up a whole new range of possible starting places for the Moon’s evolution’

The simulations also revealed that even when a satellite passes so close to the Earth that it might be expected to be torn apart by tidal forces from Earth’s gravity, the satellite can not only survive, but also be pushed into a wider, safer orbit.

Jacob Kegerreis, who led the study, said: ‘This opens up a whole new range of possible starting places for the Moon’s evolution.

‘We went into this project not knowing exactly what the outcomes of these very high-resolution simulations would be.

‘So, on top of the big eye-opener that standard resolutions can give you wrong answers, it was extra exciting that the new results could include a tantalisingly Moon-like satellite in orbit.’

The researchers hope the findings will encourage further research into the Moon’s composition and internal structure.

‘The many upcoming lunar missions should reveal new clues about what kind of giant impact led to the Moon, which in turn will tell us about the history of Earth itself,’ the team concluded.

THEIA: AN ANCIENT PROTO-PLANET THAT MAY HAVE MERGED WITH THE YOUNG EARTH TO FORM THE MOOON

About 4.45 billion years ago, 150 million years after the solar system formed, Earth was hit by a Mars-size object called Theia.

The collision created the moon, but debate has raged exactly what happened during this event – and a mystery has persisted on why the moon and Earth are so similar in their composition.

The impact of Theia with Earth was so violent, the resulting debris cloud mixed thoroughly before settling down and forming the moon.

This cloud would have been composed of some Earth material, explaining the similarity between Earth and the moon, and other material.

The colliding body is sometimes called Theia, after the mythical Greek Titan who was the mother of Selene, the goddess of the Moon.

But one mystery has persisted, revealed by rocks the Apollo astronauts brought back from the moon – why are the moon and Earth so similar in their composition?

Several different theories have emerged over the years to explain the similar fingerprints of Earth and the moon.

Perhaps the impact created a huge cloud of debris that mixed thoroughly with the Earth and then later condensed to form the moon.

Or Theia could have, coincidentally, been isotopically similar to young Earth.

A third possibility is that the moon formed from Earthen materials, rather than from Theia, although this would have been a very unusual type of impact.