Hate the idea of a crazy diet and endless exercise? Then head to a Greek spa

A combination of stress, ill health and middle age have driven me to seek out detox holidays.

I feel great afterwards but wouldn’t describe them as particularly enjoyable.

Most top European wellness retreats either involve an element of starvation, white coats and purging, or terrifying exercise regimes combined with kale juice.

The Euphoria Retreat, pictured, is a luxurious health resort in the Peloponnese in Greece

But now Greece has its first destination spa where you can de-stress, detox, lose a few pounds… and enjoy yourself at the same time.

The Euphoria Retreat is a luxurious health resort in the Peloponnese.

This is a relatively undiscovered part of Greece yet with easy access from the UK. The nearest airport is Kalamata with flights from London, Manchester and Birmingham that take less than four hours.

Early-morning hikes along forested mountain trails through dramatic gorges bordered by waterfalls and wild flowers were a big plus for me.

Euphoria is the brainchild of a former investment banker who worked in London and on Wall Street and was the first woman in Greece to become the CEO of a bank.

As you’d expect, Marina Efraimoglou is a driven woman whose journey to building her own wellness retreat began with a cancer diagnosis. 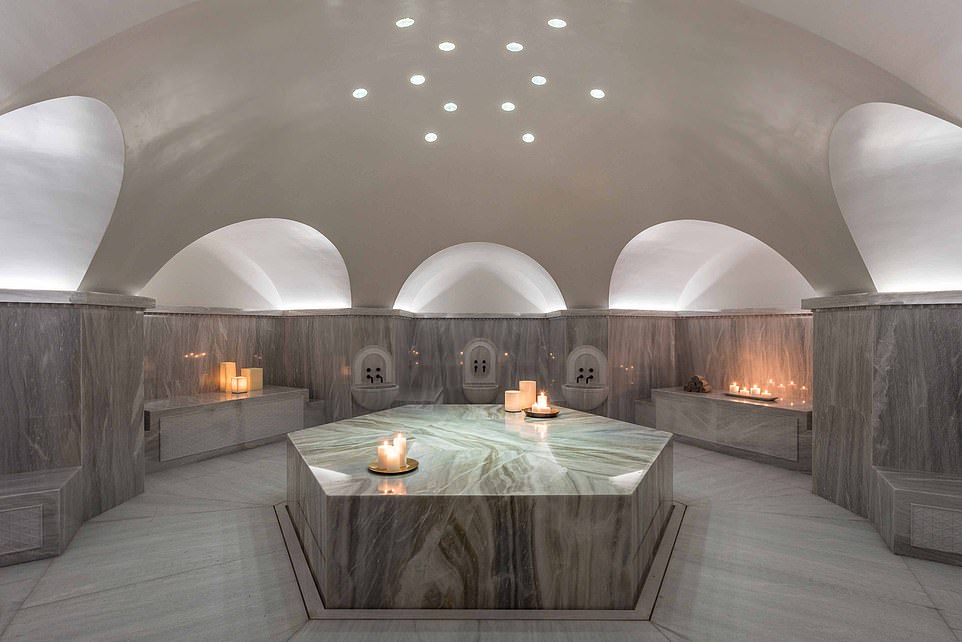 She was 28 and the chief trader in the dealing room of an investment bank when she was diagnosed with non-Hodgkins lymphoma, which required a punishing regime of chemotherapy. ‘After that I wanted to enjoy life to the maximum. I worked hard and played hard, but I also began doing regular detoxes,’ says Marina.

It was a visit to The Golden Door, a Californian wellness spa beloved by Hollywood celebrities and digital-detoxing creatives, that convinced her she needed to open her own place in Greece.

It was the Ancient Greeks who invented the concept of health spas. Known as Asclepions (after the Greek God Asclepius), these healing temples were built high up, near water and trees. Visitors would stay for up to a month at a time and would be prescribed a special diet, baths and have their dreams analysed.

Hippocrates famously said ‘Let food be thy medicine’ and food at Euphoria is excellent, light, seasonal and locally sourced. I took my breakfast and lunch on the terrace overlooking olive groves and orange orchards. 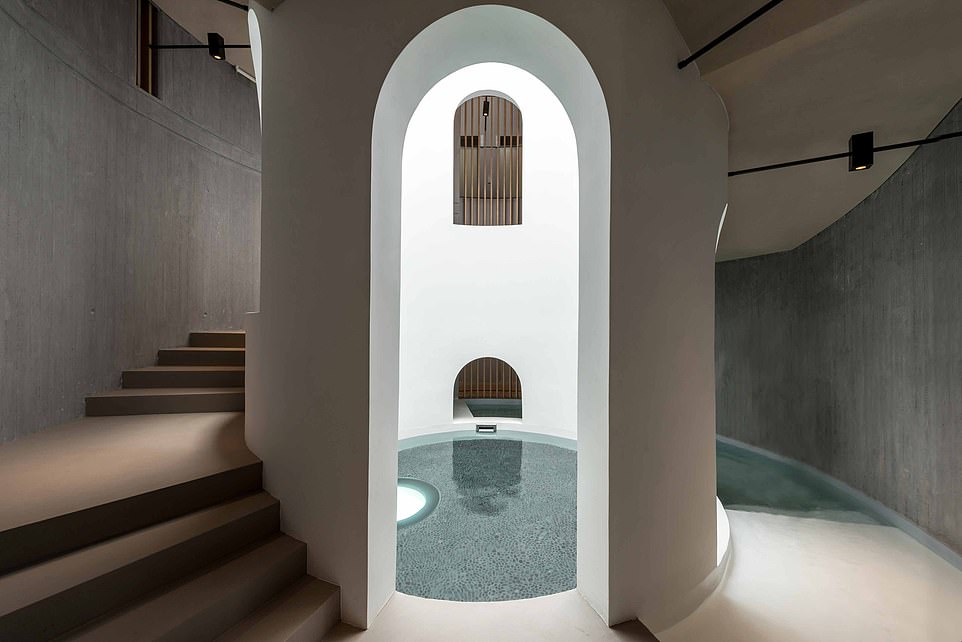 The nearest town is Sparta but there’s nothing left of the ancient city. However, you can walk from Euphoria to the ruined hilltop town of Mystras

Guests are allowed to drink alcohol and coffee, although it’s not encouraged. There’s a bar in the reception area with comfy sofas and a non-alcoholic cocktail menu.

I followed the Five-Day Wellbeing Detox, which comes with a personalised eating plan devised by a nutritionist.

This was based on a pin-pick blood test called a 3GI Analysis, which measures bio-markers important for your metabolic health.

Instead of starving, I was encouraged to eat three meals a day with a mid-morning smoothie and a light afternoon snack. Much to my surprise, I lost 4lb and my jeans felt quite loose.

Included in my detox programme were two treatments a day including massages, scrubs, hammam rituals and algae baths.

My favourite, the Royal Euphoria Bodywork – which included dry skin brushing, cupping and massage – was based on a ritual performed by the ancient Spartans in preparation for competitive games. Apart from the morning walks, there’s also a daily programme of classes including t’ai chi, stretching and different types of yoga. 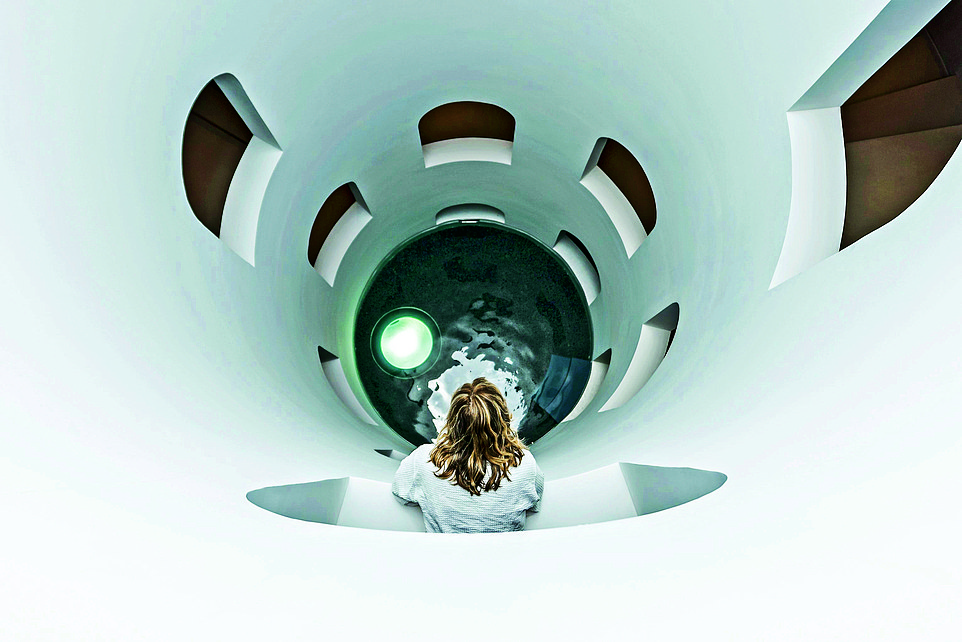 Splash out: One of the pools at Euphoria, where the architecture reflects its Byzantine heritage

The nearest town is Sparta but there’s nothing left of the ancient city. However, you can walk from Euphoria to the ruined hilltop town of Mystras, which is topped by a magnificent Byzantine castle straight out of Game Of Thrones.

On one early morning walk, we stumbled across a 14th Century chapel in the forest decorated with exquisite frescos of the Stations of the Cross.

The resort combines contemporary minimalism with a nod to the Byzantine heritage. The indoor pool has an outer ring of whirlpool baths and an inner ring of arches surrounding a perfect domed sphere at the centre.

When you dive underwater, you can hear the sounds of whales and dolphins.

My fellow guests were predominantly British, including a couple of frazzled Londoners taking their first holiday in years, without small children.

Desperate for a good night’s sleep, they raved about the comfortable beds (handmade in Greece). All of this comes with a big price tag attached. But given the quality of the rooms, the treatments and how relaxed I felt by the end, I’d say Euphoria is worth it.

British Airways flies from London to Athens from £47 each way and EasyJet from UK airports to Kalamata (seasonal) from £212 return.