A hunt for information is on to identify the brave English WWI soldiers who posed for this photograph before heading off to the battlefields of mainland Europe.

Fresh-faced men stand at Letchworth train station in Hertforshire on August 5, 1914, about to head off to war in the trenches.

Historian Dan Hill has tried to identify all the soldiers, part of the 12 platoon, E Company, Hertfordshire Regiment, to discover their fate during the war.

And of the 11 men he has so far been able to put a name to, seven of them were killed.

He is now appealing for information to help identify the remaining soldiers in time for the 100th anniversary of the Armistice in November.

The photograph was taken at Letchworth train station in Hertfordshire on August 5, 1914, and is of 12 platoon, E Company, Hertfordshire Regimen

But he grimly suspects the majority of those did not make it home either.

He knows for certain that one of those was Private Bill Johnson who was buried alive alongside Private Walter Flanders on November 19, 1914 after a German shall blast caused their trench to collapse.

Pte Flanders, who was 19, is seen in the photo stood third in on the left.

Records show Pte Johnson, also 19, was on the station platform at the time the photo was taken but Mr Hill has so far been unable to put a face to the name.

From Letchworth train station, the men caught a train to Norfolk where they trained for three months before catching a boat to France on November 5.

Corporal Arthur Boardman, 21, is seen stood next to his wife Mary who was on the platform to wave her husband off.

Three months later on November 18 he became the platoon’s first casualty of the war, killed by a nervous British machine gunner who mistook him for an enemy soldier as he went from trench to trench with ration supplies.

Jack Satterthwaite was the platoon sergeant and is stood alongside his father James on the far left of the photo.

He was shot in the chest during fighting at Festubert in north west France on April 17, 1916 and died of his wounds in hospital five days later aged 25.

On July 31, 1917 – the first day of Passchendale – the Hertfordshire Regiment suffered its worst day of the entire war.

An estimated 620 men and officers attacked German positions at the village of St Julian in Belgium. Within two hours 10 officers and 130 soldiers had been killed. Many more were wounded or captured.

Two of the dead were Pte George Sherwood, 21, who is stood front centre in the photo, and Pte William Smith, 22, stood second in on right.

At 16, George Drury lied about his age to join the army. He was wounded on three occasions but survived the war only to be killed fighting for the Allies in the Russian Civil War in March 1919. 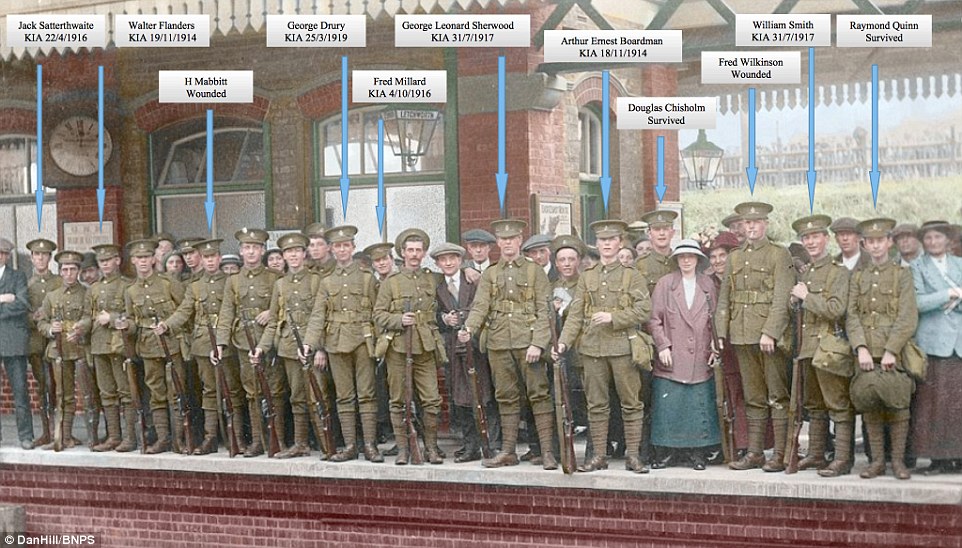 Historian Dan Hill is trying to uncover the fate of the soldiers from the Hertfordshire Regiment who were pictured at Letchworth train station about to head off to battle in 1914. This tabbed-up version shows the names of some of the soldiers in the picture

Of the three men in the photograph known to have returned to Britain after the war, one was Raymond Quinn. He was aged 14 when war was declared and was a boy bugler in the company. He is seen holding his bugle in a case on the station platform.

Mr Hill, of Herts at War, a Lottery-funded project to tell untold stories relating to the First World War, said: ‘We have searched through thousands of wartime documents and images but every now and then there is one that just stops you in your tracks.

‘This photo, showing the men of Letchworth departing for war, is a perfect example.

‘It was taken around 10am on 5th August 1914 and shows 20 young soldiers alongside a number of locals.

‘Ever since discovering the photo it has been the hope of the project to identify each of those faces looking back at us and to find out what became of them in the Great War.

‘We have managed to identify eleven of the men in the photograph.

‘Unusually, seven of those identified were killed in action, a much higher proportion than you would expect based on national casualty rates for the war as a whole.

‘We would love to be able to put a name to each one of these faces for the first time and to share their stories once more with the people of Hertfordshire.’