A horrified resident tackled actors pretending to rob a store in Dorset during filming for a new indie horror film.

As the director shouted ‘action’ the actors, dressed as robbers, charged into the shop in Winfrith Newburgh, but a resident believed the scenes were real and ran in front of cameras to stop the ‘raid’.

Producers of the film ‘Perran’ had chosen the village to shoot some of the action scenes.

The actors, dressed as robbers, in a behind the scenes shot of the ‘raid’. John Capel, holding a baseball bat, chases Jamie Crew after the store ‘robbery’ with Primrose Bigwood (left) and Sandra Capel (right)

John Capel, a spokesman for the production company Hard Road Films, said: ‘A member of the public attempted to chase the gang after they left the scene.’

‘A camera had been hidden in the ‘getaway’ vehicle parked outside the shop so it wasn’t really visible to the general public.

‘When the gang left the shop, chased by a very irate shopkeeper, it looked just like a real robbery – so much so that a passing member of the public decided that he should try and help.

‘Fortunately, the director, Rad Brown, was on hand to reassure the brave man that they were just making a film.’ 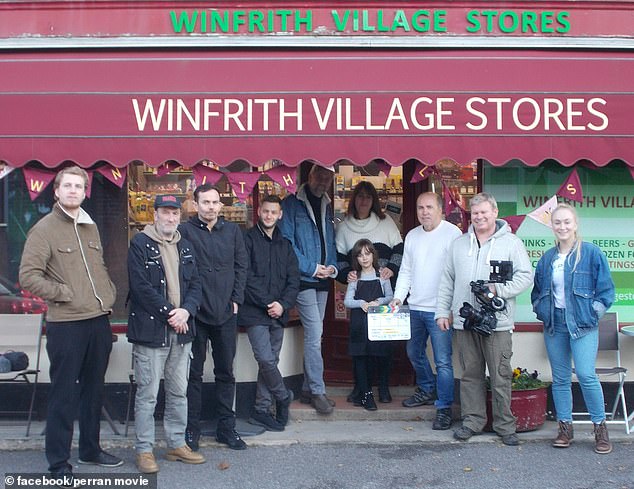 The actors pretended to rob a store (above) in Dorset for filming of the new indie horror film ‘Perran’. But one resident believed the scenes were real and attempted to tackle them

Mr Capel, who appeared as an actor in Broadchurch, added: ‘We were so impressed by the community spirit of that person for checking to see if he could be of assistance. 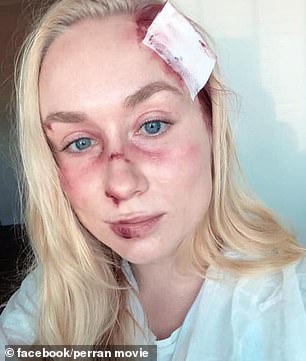 ‘It is obviously a very special place to live, in fact we were overwhelmed by the hospitality and co-operation afforded to us by the local community during our stay in the village.

‘We would publicly like to extend our thanks to everyone for their patience and sincerely apologise to those that may have been inconvenienced by our arrival.’

He said that ‘due to the nature of the scenes’, the production company had pre-warned the police and approached all the households in the vicinity to let them know in advance.

Jonathan Moore, the owner of Winfrith Village Stores where the ‘robbery’ was staged, said: ‘We were delighted to have had the opportunity to support the UK film industry and we had a lot of fun watching the all-too-realistic action take place in our shop.’

Producers of the film ‘Perran’ chose Winfrith Newburgh to film their action scenes. A Hard Road films spokesman said they were ‘impressed’ by the ‘community spirit’ in the village