Reports of immigration officers apprehending people in the US illegally circulated on social media on Saturday as Donald Trump confirmed raids would begin the following day.

POTUS said that agents from U.S. Immigration and Customs Enforcement (ICE), would conduct a series of raids on Sunday to deport immigrants with outstanding orders to leave the country.

Trump said the raids would primarily target those with a criminal record, but immigration advocates say the agency is increasingly targeting families who have recently entered the country. 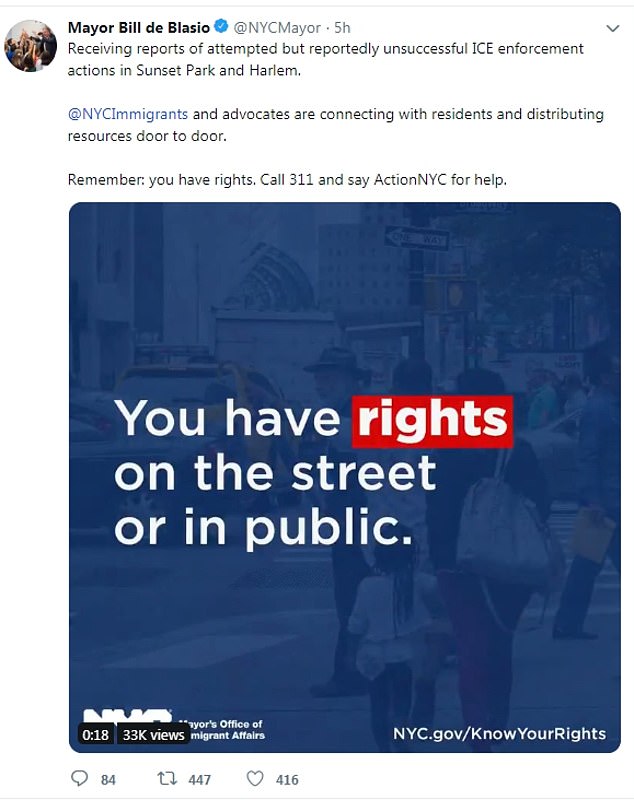 He wrote: ‘@NYCImmigrants and advocates are connecting with residents and distributing resources door to door.

‘Remember: you have rights. Call 311 and say ActionNYC for help.’

Trump and other officials have previously claimed that ‘millions’ would be deported, but it is thought that such an operation would be logistically difficult.

ICE has obtained court orders for the removal of about one million undocumented migrants, according to a senior administration official, but the initial raids will target some 2,000 across at least 10 cities, the New York Times reported this week.

Trump said ICE would focus mainly on people with convictions, including gang members, but also others. 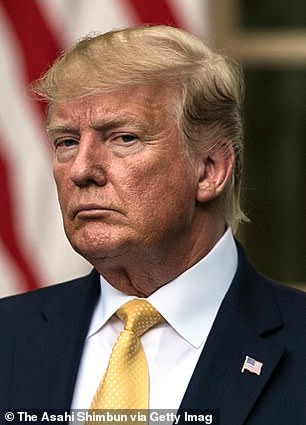 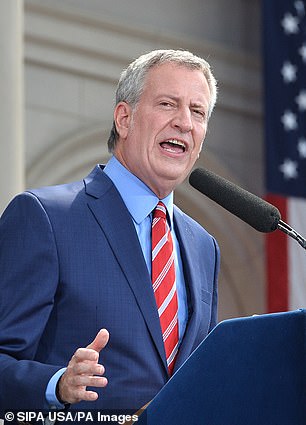 Donald Trump, (left),  said the raids would primarily target those with a criminal record, but New York Mayor Bill De Blasio was keen to point out immigrant rights and directed them to agencies where they could seek assistance

While the focus will be on removing criminals, Trump said the raids would also target ‘people that came into our country, not through a process, that just walked over a line. They have to leave.’

According to the Pew Research Center, there are about 10.5 million undocumented migrants in the United States, and two-thirds have been in the country more than 10 years.

Ken Cuccinelli, acting director of US Citizenship and Immigration Services, said Wednesday that ICE has removal orders for some one million migrants, but added that it has nowhere near the manpower or facilities to arrest and deport that many.

The operation is set to target undocumented families in an expedited docket in the immigration court system.

According to ICE, these immigrants were given deportation orders by a judge for failing to appear in court, also received notification from the agency, CBS reported. 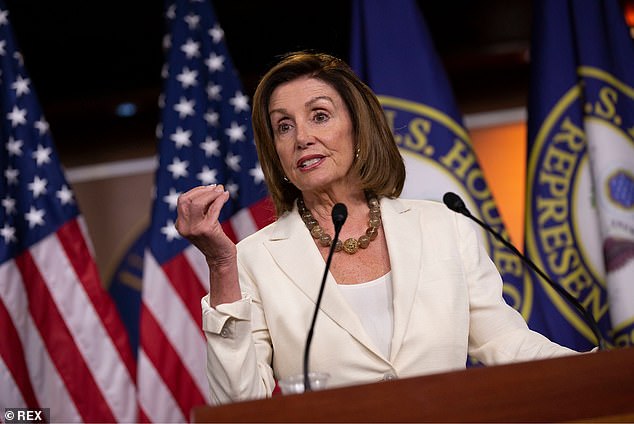 Nancy Pelosi, (pictured), called the ICE plan ‘heartless raids on families’ and said Sundays are when many Hispanic immigrant families are in church 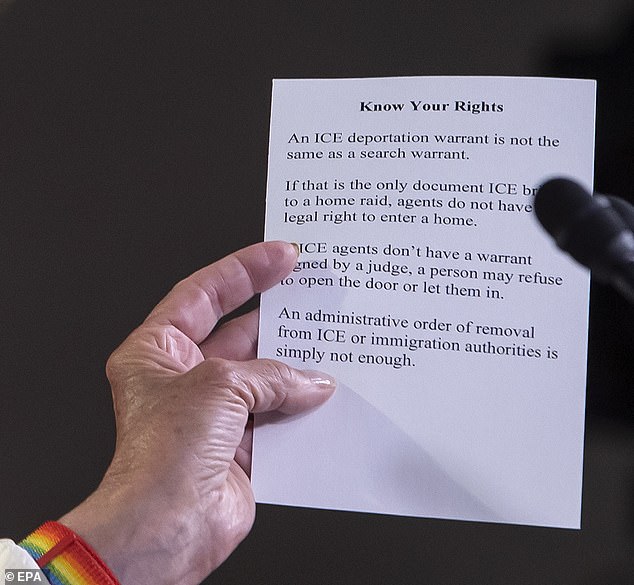 Last month Trump gave Democrats a two week deadline to change the nation’s laws that guarantee the right for people to apply for asylum as raids which had been planned were called off.

Immigration and Customs Enforcement (ICE) will launch sweeping deportation operations on Sunday as the administration expands its crackdown on undocumented immigrants, the New York Times reported.

Democrats lashed out at the plans, saying they threaten people who have lived in the United States for many years and built families that include US citizens.

Pelosi called the ICE plan ‘heartless raids on families’ and said Sundays are when many Hispanic immigrant families are in church. She said families feel very ‘threatened and scared’ by the raids. 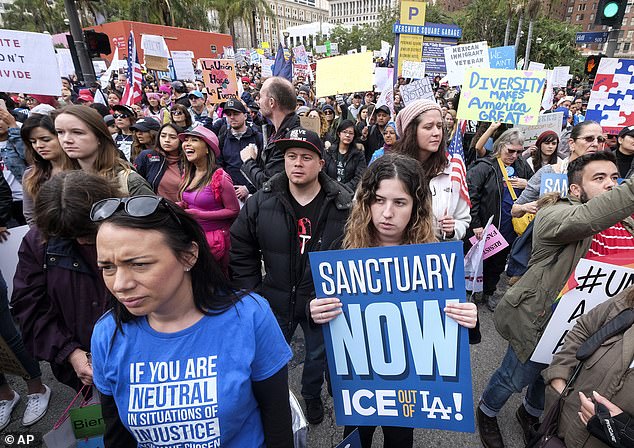 In a file photo from 2017, thousands of people take part in the ‘Free the People Immigration March’ to protest actions taken by President Donald Trump and his administration

‘These families are hardworking members of our communities and our country. This brutal action will terrorize children and tear families apart,’ she told reporters.

‘Many of these families are mixed-status families,’ she added, referring to families who include members in the United States legally and illegally, such as migrants with children born inside the country.

They were taking a cue from Rep. Alexandria Ocasio-Cortez also urged people to ‘know your rights.’

‘Check your neighbors & know your rights,’ she tweeted earlier Thursday.

‘Remember: no one can enter your home without a *judicial warrant.*’ she advised. She also wrote that ‘Sometimes ICE will try to show other papers to get in your house. Judicial warrants are from a court.’

ICE hasn’t commented on the raids, which would come with Trump seeking to demonstrate toughness on immigration amid a still-strong influx of migrants across the border with Mexico.

On Wednesday, the Department of Homeland Security said 104,344 migrants were detained after crossing the border in June, down 28 percent from May’s 13-year record high but still an extremely high figure, some 60,000 more than the same month last year.