Have scientists found the key to beating prostate cancer?

By Fiona Macrae for the Daily Mail

Scientists have discovered that a key protein may be the secret to treating prostate cancer patients with ‘miracle’ immunotherapy drugs.

Clinical trials have now begun – with the goal of unleashing cancer-killing white blood cells to attack the tumour.

Immunotherapies have had stunning results against some types of the disease.

But, so far, they have failed to work against prostate cancer and scientists have not been able to work out why.

Clinical trials have now begun – with the goal of unleashing cancer-killing white blood cells to attack the tumour. Prostate cancer cells are seen above

Now, researchers at the Institute of Cancer Research (ICR) and the Royal Marsden Hospital in London say they have got the answer – and it is a protein called CD38.

Research suggests it then deprives other cancer-killing white blood cells of the energy they need to attack the tumour.

This means that drugs that target CD38 could unleash the power of the immune system on the cancer cells.

Crucially, such medicines already exist and trials are underway. 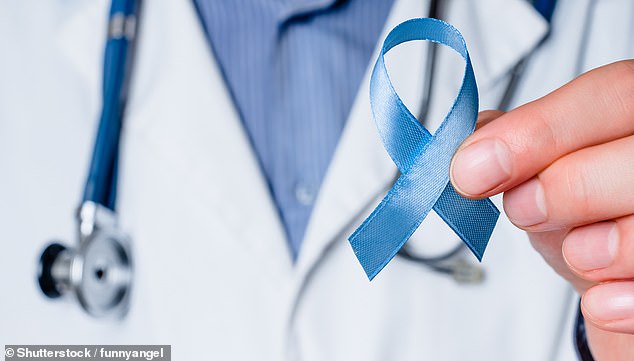 Researcher Professor Johann de Bono said: ‘There’s a lot of evidence that prostate cancer causes what we call immune tolerance – that the cancer suppresses the body from attacking it with its immune cells.

‘Our findings suggest that we can target immune cells displaying CD38 proteins to awaken the immune system.’

Samples from more than 200 men with advanced prostate cancer revealed that those whose tumours had a lot of CD38 protein were twice as likely to die in the next ten to 15 years.

The research, published in the journal European Urology, also found that the cancer became harder to treat as levels of the protein rose.

Prostate cancer is the most common cancer in men – with 48,500 cases a year and almost 12,000 needless deaths. The Daily Mail has long campaigned for greater awareness, treatment and diagnosis of the disease.

Professor Paul Workman, of the ICR, said: ‘Studies like this are critical in helping us understand how prostate cancer interacts with the body’s immune defences and could help pave the way for more effective treatments.’