They say that 50 is the new 40, so perhaps it’s no wonder that growing numbers of women are giving birth at an age when once they were caring for grandchildren.

Only last month Tracey Britten made headlines by becoming the oldest woman in Britain to give birth to quadruplets. At 50, she was the same age singer Janet Jackson was when she had her first child last year.

Some would ask why women such as Tracey – already a mother to three grown-up children and grandmother to eight — would choose to return to nappies and night feeds at a time when those of a similar age will be enjoying the freedom that an empty nest and looming retirement brings.

One person who can answer that question is high-powered divorce lawyer Ayesha Vardag, who gave birth to her fourth child just six weeks ago – aged 50 – and, controversially, says it’s actually the best time of life to have a baby.

On the surface, Ayesha already appeared to have it all before the birth of her youngest son. For the past 15 years she has run her own successful law firm, Vardags, specialising in high-profile litigation.

Every year she oversees about 500 divorce cases, with royalty, celebrities and billionaires among her clients.

She juggles her career with an equally busy family life, which includes homes in London, Hampshire, Italy and Dubai.

Between them, they already had five children from previous relationships, yet they didn’t feel their brood was complete. Hence the arrival of their baby son, Orfeo.

There are considerable health risks attached to pregnancy in later life – including miscarriages and birth defects – and even the most optimistic young mum knows she is in for a truly exhausting time.

So why on earth did Ayesha decide to turn her life upside down once again, when most of us would prefer to enjoy some hard-earned relaxation? 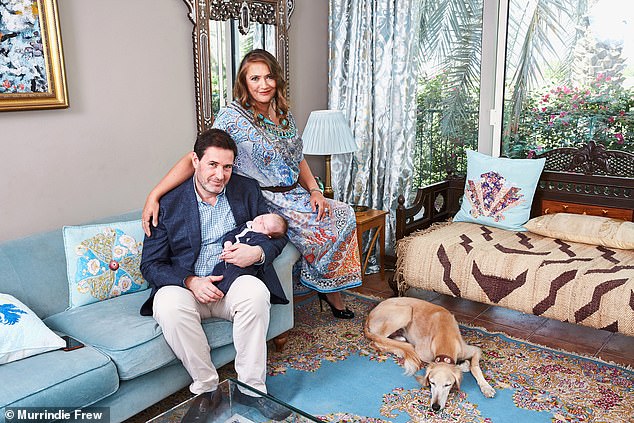 Her answer will shock mothers everywhere. Here, in a defiant manifesto for the (very much) older mum, Ayesha defends her decision to have another child and reveals why she believes motherhood at her age is easier than ever.

Her secret? An army of helpers that includes her mother, a full-time assistant, a nanny in Dubai and two housekeepers in the UK. And her multi-million-pound fortune also helps, of course.

Role model or plain potty? Decide for yourself…

So, why another baby at my age? Why not?! If I were a man, nobody would question my decision. Certainly, my husband Stephen never gets asked about it and I cannot understand why this sexist prejudice still exists.

Of course, biologically it’s easier for men to reproduce well into middle and later life — my own grandfather had his last child at 70. But, given that I was able to get pregnant, my body was clearly quite willing and able to carry another baby.

Before this pregnancy, I’d arrived at the point in life that so many mothers will recognise — my children were all preparing to leave the nest.

My eldest Jasper, 23, recently graduated from Cambridge and is now beginning his own career, and my second son Felix, 21, is in his final year at University College London.

Meanwhile, my 14-year-old daughter Helena is becoming increasingly independent and Stephen’s two children divide their time between us and their mother. 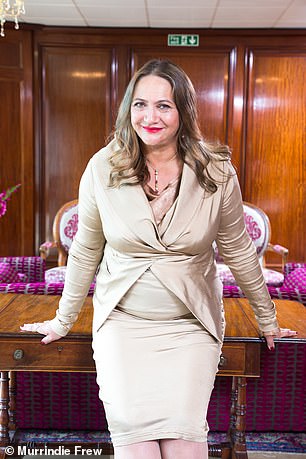 Before this pregnancy, I’d arrived at the point in life that so many mothers will recognise — my children were all preparing to leave the nest, Ms Vardag writes

Having Orfeo is the most extraordinary blessing for all of us.

To the naysayers I say this: being a mother at 50 is significantly easier than it was when I was younger.

When I had my first son, I was 27 and in the midst of completing my legal training with a City law firm.

Run by men, with rules set by men, there was huge pressure on me to perform. Within weeks of giving birth I was back at my desk working 12-hour days while my baby son was with a nanny or at nursery.

Come the evenings and weekends, my first husband and I were exhausted and longed for a moment together, but couldn’t afford yet more childcare.

When my second son was born two years later, there was still no respite and I’m certain that was a factor in our subsequent divorce when the boys were small.

By the time I had Helena I was 36 and, although I was setting up Vardags by then and calling the shots, it was incredibly fraught.

When she was a baby, I worked up to 20 hours a day including networking in the evenings to drum up clients. I smoked and drank way too much, never had time to exercise and put on lots of weight.

There was a constant conflict between needing to work like a beast to build the business in order to support my family and missing my children terribly.

Forward 14 years and motherhood the fourth time around is infinitely more relaxed. There are many reasons why.

For starters, Vardags is firmly established. Our reputation as leading litigators means clients come to us and I no longer have to go out hunting for them.

If I were a man, nobody would question my decision… Babies are such a joy that I would have a dozen if I could

I don’t smoke or drink any more and, with more leisure time I run, swim or ride my horses every morning. I’m healthier than I ever was in my 30s or 40s and have much more energy.

Plus, having slogged away at work for so many years, Stephen and I now have more cash and can afford to pay for extra help.

I’m extremely fortunate to have a full-time assistant who travels with me when necessary, a housekeeper in Dubai who doubles as a nanny for Orfeo while I work or make calls, and a couple who look after our farm in Hampshire and help with childcare when we’re there.

But because I control my own diary now I can be with him whenever I choose.

Having babysitters constantly on hand means that, if Stephen and I want to go out in the evenings or at weekends, we can. Though it may sound self-indulgent, making time to be a couple is essential for the happiness of any marriage.

Through my work as a divorce lawyer I constantly see couples drifting apart after having children. In fact, it was one of the reasons Stephen was reluctant for us to have a baby for the first few years of our relationship, concerned that doing so would be detrimental to the lovely life we’d created together.

But by the time we married in 2014, four years after meeting in our local pub in Winchester, our respective broods were ever more integrated and he agreed that having a baby of our own would be wonderful. 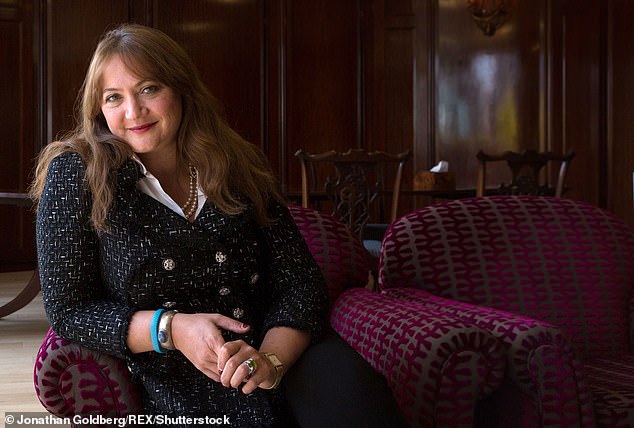 Ayesha Vardag juggles her career with an equally busy family life, which includes homes in London, Hampshire, Italy and Dubai (pictured in her office at 10 Old Bailey, London)

Of course, nature dictates that a woman’s fertility in particular declines with age, so it took far longer than we’d planned. But, after years of trying, earlier this year I finally got the positive pregnancy test result we’d longed for. Having given up hope by then, I was so stunned that my first words were unprintable!

Stephen and I were thrilled, though inevitably there were moments of legitimate worry, including his old fears that I might become obsessively mumsy and never want to go out with him alone again.

So a week after my planned caesarean I returned to work, but this time happy in the knowledge that I have more power in the workplace and the luxury of flexibility and paid help. It all means that I can stay close to my baby boy and spend time with him regularly throughout the day while still leading my company.

To reassure Stephen that he isn’t going to lose me beneath a pile of babygros and nappies, we went out for dinner and drinks when Orfeo was ten days old, which he admitted made him feel relieved and happy.

Orfeo is the sweetest little boy who’s already brought immeasurable joy to our family. Despite being a career woman, I have always loved motherhood and feel that I have so much to give as a mother, now as much as ever.

Ayesha Vardag: Given that I was able to get pregnant, my body was clearly quite willing and able to carry another baby

I’m not foolish enough to disregard my age. But my concern is not that I’m too old to raise another child – what nonsense! – it’s that I must remain as healthy and energetic as possible for Orfeo and all our children.

No one appears to bat an eyelid when Orfeo and I are out and about together. Many strangers stop to ask if it’s my first baby and appear stunned when I reveal that he’s my fourth, which I would like to think means I look younger than my age.

My own mother is 74 and still rides horses and lugs hay bales around stables.

She often does the school run with Helena and could perfectly well be managing a child herself, so I’m not worried how I’ll cope when I reach my 60s and beyond.

The hardest thing for me is being woken up several times every night when Orfeo wants a feed. But that was the same in my 20s and 30s, it’s got nothing to do with my age. The lovely thing is that as children grow up they become more fun and interesting, they bring their friends over, and your home is full of laughter, mess and chatter.

I’m looking forward to having all of that again with Orfeo.

Having grown up as an only child, raised by my mother and grandmother, I’d had quite a solitary existence until I was 18 and went to stay with some of my father’s relatives who had seven children.

We played rounders together, went camping and wandered off to buy ice creams.

I’d never experienced such companionship and dreamed of having a big, bustling, noisy, loving family one day. It was at that point that I determined that I wanted at least six children.

Counting my stepchildren, I’ve achieved that number now that Orfeo is here. Yet babies are such a joy and make me so immensely happy that I’d have a dozen if I could. Although I think my chances of producing another baby in the future are small, let’s just say that the door is open and I’m certainly not trying to stop it happening.