A Hawaii high school has come under fire after issuing a dress code for the students’ prom banning ‘excessive cleavage’.

Kauai High School has become the target of a Change.org petition after releasing the dress code, which critics have branded ‘discriminating and insulting to girls.’

According to the petition, the dress code states that ‘the slit on the dress may not expose the upper thighs,’ and ‘backless dresses may not fall below mid-back.’

Causing a stink: Kauai High School has sparked a protest from students after releasing a dress code banning girls from wearing dresses that show ‘excessive cleavage’

Off-the-shoulder dresses cannot show cleavage and ‘excessive cleavage’ in general is also on the list of ban-worthy offenses, as well as any cutouts exposing flesh or bare midriffs.

The petition against the code was launched by student Annie Funaki of Lawai, who wrote: ‘The facts are this is 2018, where we are told to be confident in our body, but then you create these restrictions that discriminate us and hypersexualize us to the point that we cannot feel comfortable without the assumption that we are being “provocative.”‘

An image posted in the petition shows a yellow poster plastered with images of prom dresses with the title ‘Prom Do’s and Don’ts’ at the top.

Next to the title is a disclaimer that reads: ‘If you do not follow these dress codes, you will not be able to enter prom and will not be refunded. Thank you.’

Annie adds that she isn’t asking for the code to be entirely abolished, but rather asks for ‘modifications’, arguing that Kauai High School is the only one in the area with such tight restrictions. 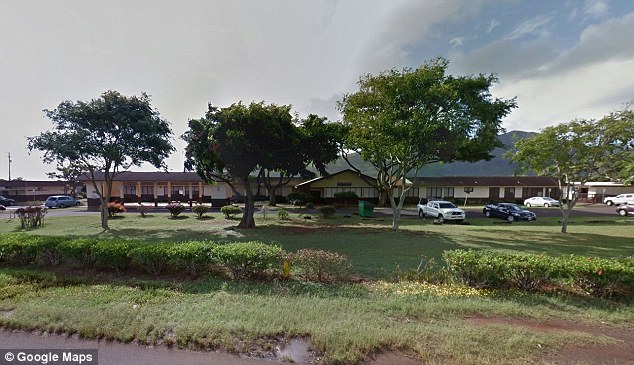 Hot water: The school has been accused of discrimination over the rules, with critics pointing out that there are twice as many rules for boys as girls

The teenager also argued that the rules were inherently sexist, pointing to the fact that there were twice as many rules for girls than for boys.

‘We ask you to please read this and hear our voice, as we try to make a change in something that should not have been done in the first place, and trust our judgment in representing ourselves and this school,’ she said.

The petition has already attracted more than 400 of the 500 signatures sought and also led to many supporters offering their own thoughts.

‘Students should have a right to wear whatever dress they please they should be able to feel confident and express themselves,’ wrote one.

Another added: ‘If you’re worried about boys getting too excited over seeing a girls shoulders, you should be teaching them some self-control.’

Daily Mail Online has reached out to the school’s principal Anne Kane for comment.