As lava threatens to take their homes and escape routes are becoming blocked, tensions are rising in the residential areas nearby the Kilauea volcano on Hawaii’s Big Island.

Video shows an argument between neighbors John Hubbard, 61, and Ethan Edwards, 32, escalated on Tuesday when Hubbard pulled out a gun.

The clip, which cuts in about halfway through the argument, sees Edwards lunge towards the gun and Hubbard push him back. When Edwards lunges a second time, Hubbard fires a warning shot just above his head.

As Edwards screams: ‘You’ve gotta be kidding, I live here’, Hubbard yells at him to: ‘Get the f*** out of here’.

This was my yesterday. Happy to be alive. Be careful out there folks. This situation is really beginning to take its toll psychologically and the bad weather is contributing to emotional tensions. Folks are breaking down. Briana Spangler was present along with Aurorah Davis Lauren Kaech and Preston. We’re all ok physically. Just shaken psychologically. The police were called immediately and the shooter is in custody at this time. Update: His name is John Hubbard. Looks like he’s been a community menace for awhile. https://youtu.be/SpSFXITw0Iw Always Stand up to bullies to prevent another person from being their next victim. 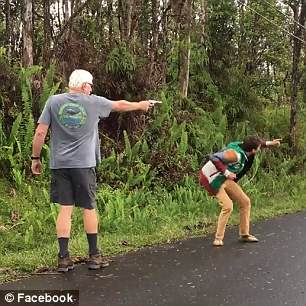 Ethan Edwards (pictured on right) and John Hubbard (left) were arguing on Tuesday in a residential area affected by Kilauea when Hubbard, 61, pulled out a gun and fired a warning shot 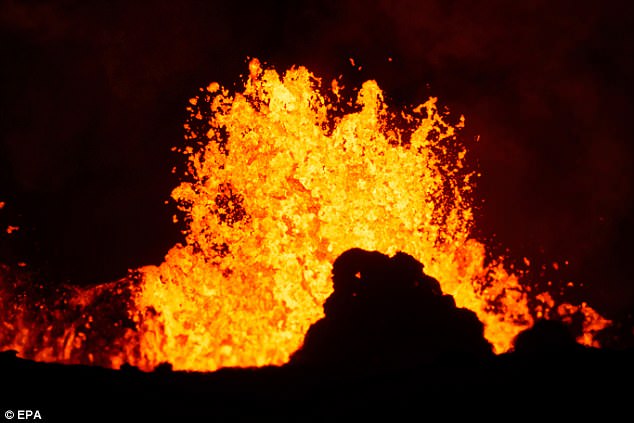 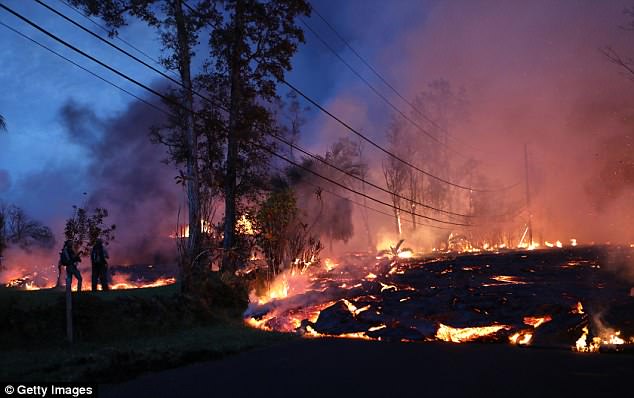 More than 70 homes have been lost in the natural disaster, which is threatening to close off the last escape route 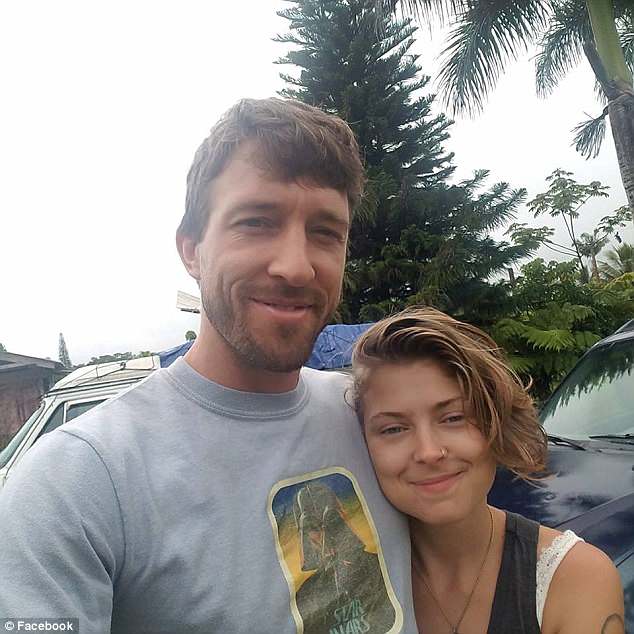 Edwards is seen ducking as Hubbard continues to point his gun, while others nearby try to tell the man the group do in fact live in the area.

Police arrived at the scene and arrested Hubbard. He was charged with first degree reckless assault.

Edwards told officers he had returned to the area with friends to see his former home, which had been destroyed by lava flowing out of the Kilauea volcano, before Hubbard arrived in his truck and told them to leave.

Sharing the video of the event on Facebook, the 32-year-old said he and his friends were all ‘okay physically, just shaken psychologically’.

‘[I’m] happy to be alive. Be careful out there folks. This situation is really beginning to take its toll psychologically and the bad weather is contributing to emotional tensions. Folks are breaking down,’ he wrote. 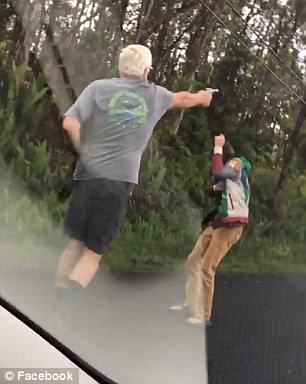 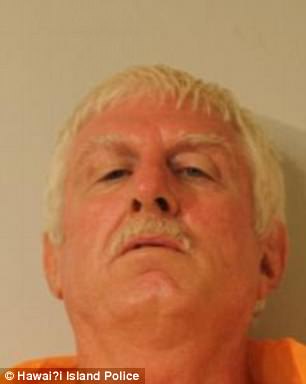 Police attended the scene and arrested Hubbard, who was charged with first degree reckless assault 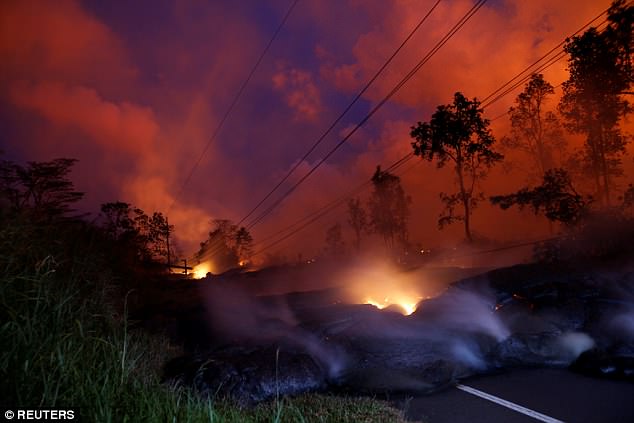 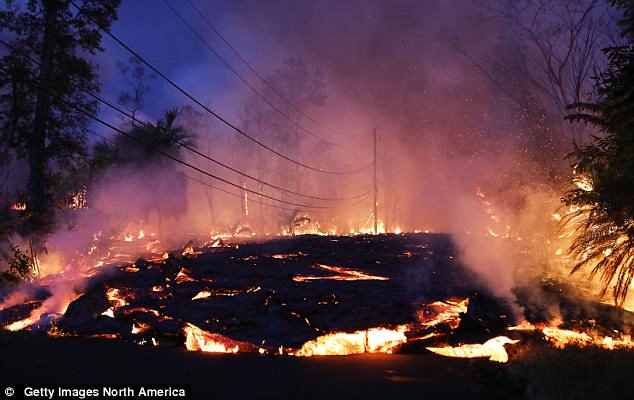 The lava is heading towards Highway 137, the last exit for residents still in their homes

On Wednesday, the USGS said ‘vigorous eruptions’ were continuing in the east rift zone of Kilauea, which has been erupting since May 3.

One fissure, or crack, in the volcano is spouting lava up to 250 feet into the air, and the lava flow was less than a mile from Highway 137 – the last route of escape for residents remaining in the area.

There are about 500 homes in the area, and the number of homes consumed by lava skyrocketed from 41 to more than 70 this week.

The lava has been moving at speed, with hardened magma now forming channels that help fresh lava move through the area faster.  Scientists told CBS it was now covering about six football fields an hour.

And while local workers are feverishly working on backup plans to ensure there is a way out for those who need to leave, the National Guard have two helicopters on standby.

Each helicopter can carry out about 45 people at a time. 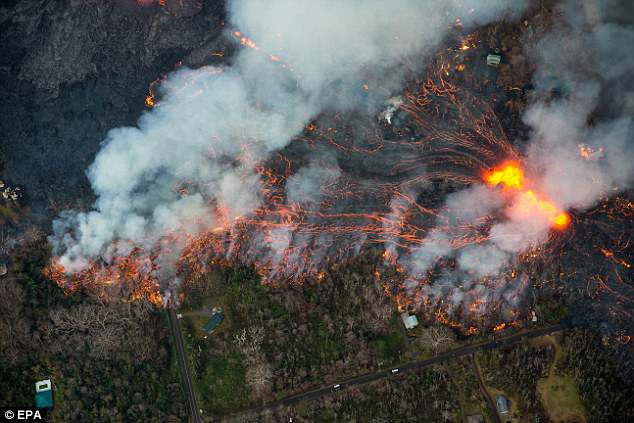 As the lava is hardening, it is forming channels for new magma to flow through, allowing it to spread further 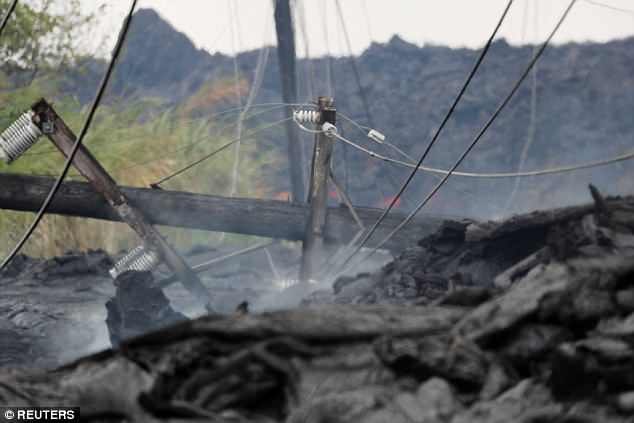 Pictured: A utility pole and power lines seen collapsed into a sea of hardened lava 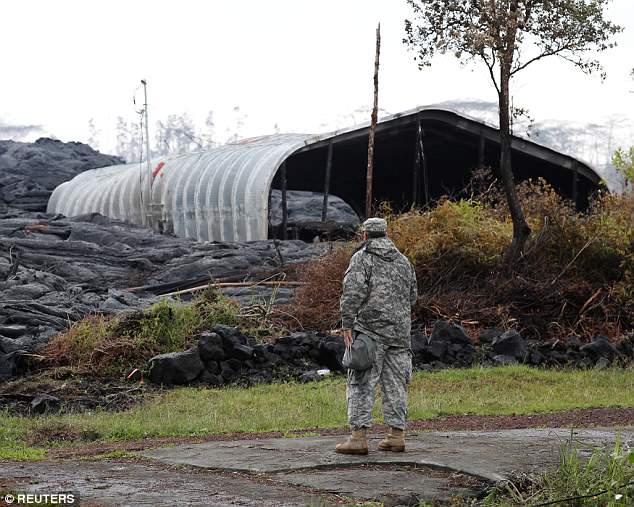