As a bird of prey, hawks aren’t used to anything chasing after them – let alone getting caught themselves.

Never has that been more clear than in the bewildered expression of the bird in a now-viral photo taken just after it was snatched by a California woman trying to protect her chickens.

The photo was posted by Twitter user @Jackalcakes on Sunday, showing her mom’s hands wrapped around the powerful bird, who can’t seem to believe what has just happened.

Snapped up: A photo of a hawk that was caught while diving for a woman’s chickens has gone viral for its confused expression 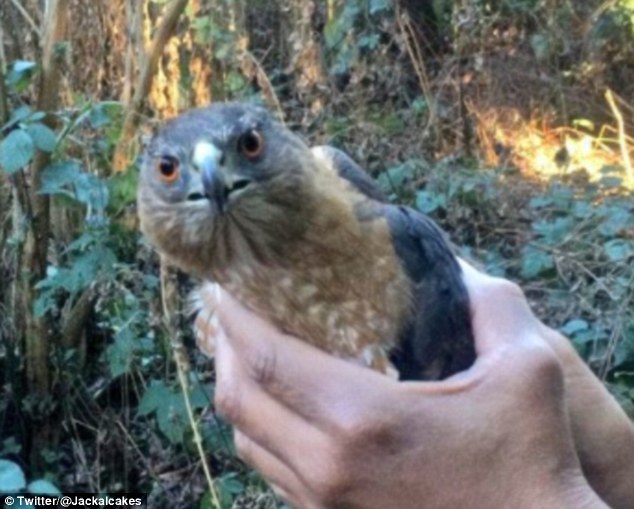 Disbelief: The hawk is seen looking straight into the camera as if to plead for a solution to its predicament

Telling the story: The picture was shared by the daughter of the lightning-quick mom, user @Jackalcakes

Typically, hawks eye their prey from the sky before diving at speeds of up to 120 miles per hour to snatch it off the ground.

However, it seems that this chicken owner was even more lightning-quick than the hawk, as she was able to grab it on its way down, seemingly with her bare hands.

‘My mother caught a hawk while it was diving to get her chickens and it just has the most confused face ever that this could have gone so wrong,’ she wrote.

The hawk appears to be looking straight at the camera in the photo, as if to plead for information on how it ended up in this situation.

Quite a feat: Users were blown away by the skills of the user’s mom in snatching the powerful bird, seemingly out of the air 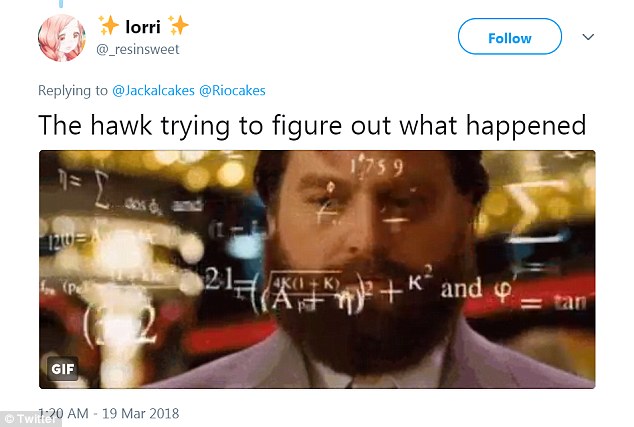 So many questions: The photo was shared on the site more than 20,000 times and attracted plenty of jokes at the hawk’s expense

Got the look: Others used the popular record-scratch freeze-frame meme to joke about the bird’s expression

The photo, and the hawk’s hilarious expression, swiftly went viral, with more than 22,000 retweets in just three days.

It also attracted hundreds of comments, many of which focus on praising the mom’s ninja-like reflexes.

‘How the hell did she just catch a hawk?? Did she just grab it midair?? Is she a ninja?? I need answers,’ wrote one user.

Another added: ‘Your mother just… caught a hawk??? I need more info on this bada**.’

Others joked using the record-scratch freeze-frame meme, imagining the hawk turning to a camera and saying: ‘Yup. That’s me. I bet you’re wondering how I got in this situation. I guess I should start from the beginning.’