Hayden Panettiere’s daughter, Kaya, four, has been living with dad Wladimir Klitschko in the Ukraine

Hayden Panettiere’s daughter has reportedly been living in Ukraine with her father Wladimir Klitschko, amid the actress’ domestic violence case with boyfriend Brian Hickerson.

Sources claimed to People that Hayden’s daughter Kaya, four, has been residing with her boxer dad, 43, since August 2018, with the ex Nashville star’s life said to be ‘in flux’ due to her child’s absence and ‘other issues weighing on her mind.’

August 2018 is also the same time Hayden and actor Brian were first seen in public. Brian is currently facing felony charges for domestic abuse after the pair were involved in a violent clash on the morning of May 2 2019.

Away from her daughter: Reports revealed on Tuesday that Hayden Panettiere’s four-year-old daughter, Kaya, has been living with her dad, Wladimir Klitschko, in his native Ukraine since August 2018 (pictured December 2013)

While it’s not known how often Hayden gets to see her daughter, she took to Twitter back in February 2019 to share a sweet shot of her sleeping.

Hayden and fiance Wladimir split in 2018 after nine years of dating.

The latest news comes after it was reported on Monday that Hayden’s loved-ones were ‘begging’ the actress to end her relationship with her allegedly abusive boyfriend.

Family and friends say the star needs ‘to straighten up and move ahead’ from the troubled relationship according to insiders who spoke to People. 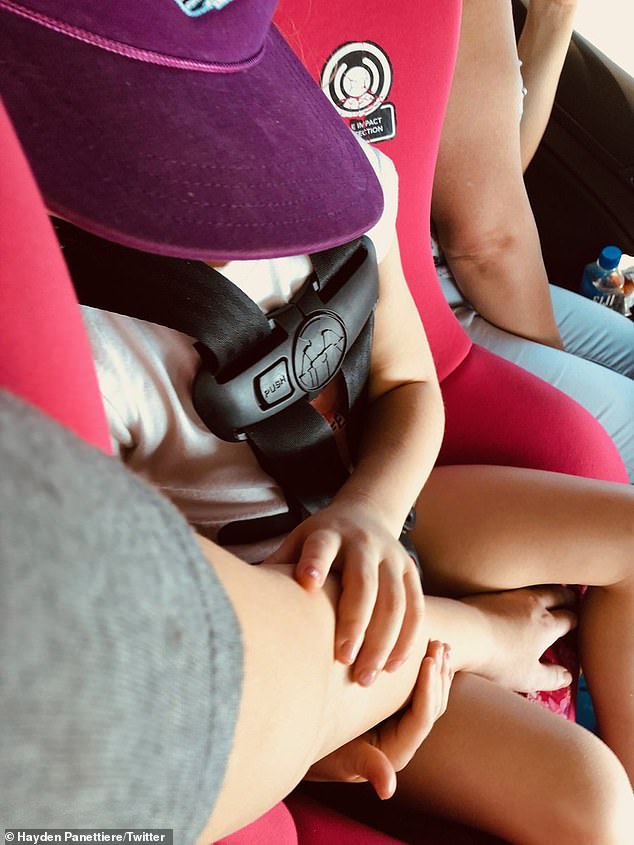 Precious moments: While it’s not known how often Hayden gets to see her daughter, she took to Twitter back in February to share a sweet shot of her sleeping. ‘Sweet moments with sleeping babes,’ she captioned 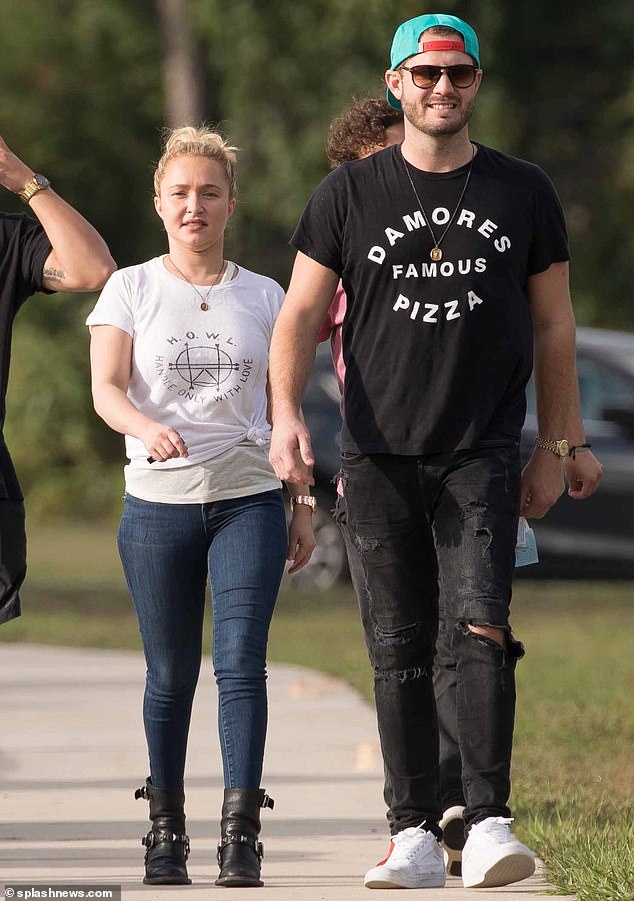 Out of control: This comes amid claims Hayden’s family are ‘begging’ the star to leave her boyfriend Brian Hickerson, who is currently facing felony charges for a domestic violence incident back in May(pictured October 2018)

‘It is totally out of control and she has to get over this guy,’ the source said of Hickerson, who is currently facing felony charges for domestic abuse.

The relationship has been worrying to the Heroes actress’ loved ones for quite some time.

‘Her friends and family have been worried about her for quite a while, and things seem to have gotten worse,’ the source continued.

‘She needs to do some soul-searching. For whatever reason, she continues this relationship, but it has done nothing but take her down lower. It’s a sad situation.’

Her family and friends are hoping she’ll find better influences in her life.

‘Hayden needs to surround herself with different types of people and get a hand on both her personal and professional life,’ the source added.’

‘It’s hard to imagine things getting any worse, but they could.’

They continued: ‘Hayden is a wonderful and talented girl who was so happy with her family. I hope she can wade through whatever has gone wrong and get her life back together.’

Brian is currently facing a felony charge following a May 2 domestic violence incident with the beauty.

Hayden reportedly sustained injuries from the violent episode where ‘he hit her on the face, causing her to get dizzy’

Brian, who pleaded ‘not guilty’, allegedly ‘struck her three times on the face with an open palm.’

The real-estate agent— who is out on $50,000 bond — appeared in a Los Angeles Superior Court room last Wednesday where a judge ruled there’s sufficient evidence to charge him with a felony following the domestic violence incident. 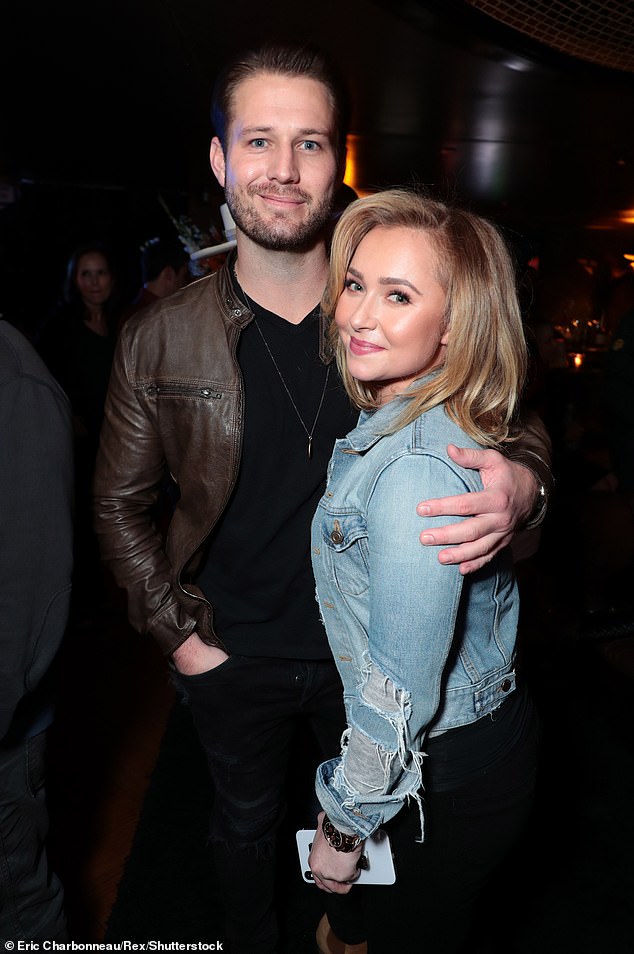 Trouble: Brian faces felon charges stemming from a physical altercation with the actress in May, according to RadarOnline; seen in December

Officer Amber Findley testified that she responded to a call at around 1:45 a.m. and recalled hearing a female voice say ‘Ow, ow, ow! You’re hurting me!’ as she approached the home.

Brian answered the door and ‘initially said he was alone with his dogs’ and that the female voice was likely the television.

Upon further inspection, Findley and another officer found Hayden ‘bruised and swollen’ in an upstairs bedroom.

‘Right off the bat, I noticed that she had bruising on her eyelids, a swollen face,’ she recalled.

‘She did have marks on her neck, the left side. When I continued to talk to her she removed the sweater that she had on. I saw bruising on both her arms.’

Hayden revealed at the time that she and Brian had been drinking at a dive bar in Hollywood earlier in the night before they returned home and an argument broke out at the front door. 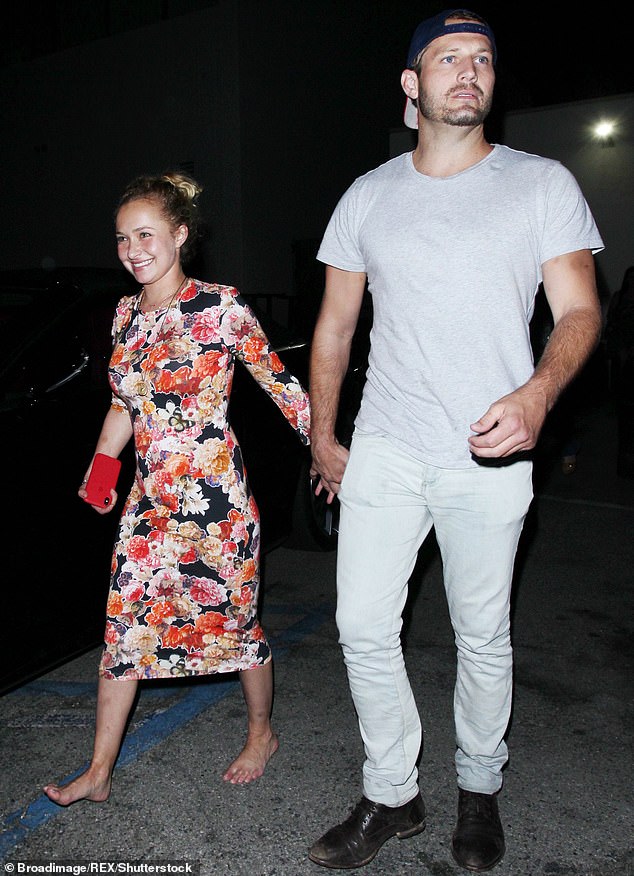 Unique: Hayden  was first spotted with Brian in August 2018, barefoot walking through a parking lot in Los Angeles

He reportedly ‘struck her three times on the face with an open palm’ and the third hit ’caused her nose to bleed.’

She allegedly ‘went upstairs’ to sleep before ‘the defendant got on top of her and with hands grabbed her on the left and right side of her face.’

‘The victim described the altercation as they began to grapple,’ Findley testified. ‘He was on top of her and grabbed her face, I believe by the hair. They began to grapple and then she extended her arm outwards to gain distance.’

The officer also testified that Hayden admitted her boyfriend had ‘harmed her’ the day before when they were in Puerto Rico.

Defense attorney Robert Hancock argued that grappling ‘usually implies a mutual combat between two parties’ as he argued to dismiss the charge.

He revealed that both Hayden and her boyfriend ‘had been drinking’ before the violent offense.

‘That’s not going to fly today,’ Judge David Fields told Hancock before denying the motion to dismiss the criminal charge.

Hayden was first spotted with Brian in August 2018, and reports shortly followed that she split with fiance Wladimir after nine years of dating. 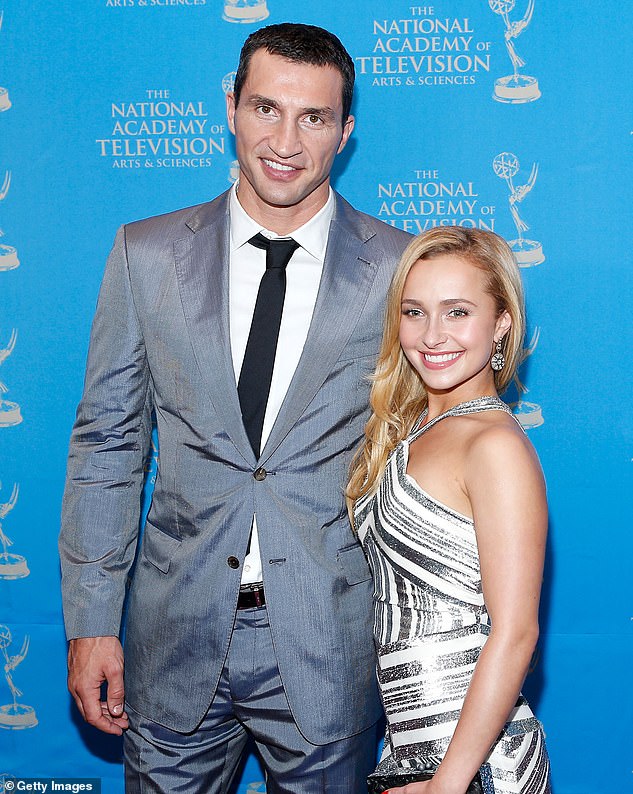 In the past: She split with fiance Wladimir in 2018 after nine years of dating and one daughter, Kaya; seen in 2013