President Trump took aim at former intelligence chief James Clapper for leaking details of the dirty dossier to CNN then allegedly lying about it as part of the Russia investigation.

In a tweet on Saturday morning, Trump called Clapper a ‘lying machine’.

It was a reaction to the GOP’s report on Friday which found that Clapper, the former Director of National Intelligence, spoke about the dossier to CNN’s Jake Tapper at the end of his tenure in January 2017.

He resigned after Trump won the 2016 election but saw out the rest of the Obama presidency then left and has since gone to work for CNN as an analyst.

In July, Clapper was asked by Republicans if he had given details of the dossier to anyone in the media.

He said he had not but, according to Friday’s report, later changed his story.

‘When initially asked about leaks related to the ICA in July 2017, former DNI Clapper flatly denied “discussing the dossier or any other intelligence related to Russia hacking of the 2016 election with journalists.”

‘Clapper subsequently acknowledged “discussing the dossier with CNN journalist Jake Tapper” and admitted that he might have spoken with other journalists about the same topic,’ the report read.

The report alleges or seems to suggest that Clapper admitted discussing it with Tapper before it CNN published a story on it on January 10. 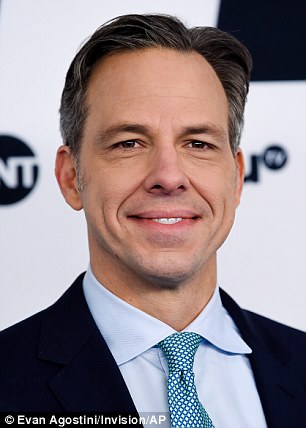 Clapper spoke with CNN’s Jake Tapper, who is now one of his colleagues, about the dossier in January

On January 10, before Trump’s inauguration, CNN published an article by Tapper which described the dossier.

The next day, Clapper said he was ‘dismayed’ that the information had reached the media and gave a statement in which he ‘expressed my profound-dismay at the leaks that have been appearing the in press.’

He added: ‘I do not believe the leaks came from within the IC.’

It is not clear if Clapper, when he later admitted to discussing the dossier with Tapper, was admitting to being his source or if he meant he had discussed it retroactively with him.

BuzzFeed, which reported the dossier first, did so on January 9.

On Saturday, Trump lamented his point by saying he had gone to work for ‘Fake News CNN’.

The report found there was no proof of collusion between anyone in Trump’s camp and Russia before the 2016 election.