A council failed in its bid to stop the Coca Cola truck passing through the borough on its famous tour.

Authorities attempted to ban the drinks giant from stopping in Croydon, south London this weekend, accusing it of promoting sugary drinks to children.

But Coca Cola steadfastly refused to take a detour and ploughed on as thousands lined the streets to see the iconic red truck.

Croydon Council had backed a campaign by Sugar Smart UK to ban the advertisement of unhealthy drinks to children over the festive season.

The Coca Cola truck (pictured here in Birmingham at the weekend). Councillors attempted to stop it stopping in Croydon

Coca-Cola scaled back its annual Christmas truck tour this year, which ended on December 16 after stopping at 24 locations, down from 38 last year.

The two 14-tonne lorries decorated with fairy lights and offering free 150ml cans of Coca-Cola, Zero Sugar and Diet Coke have been welcomed by councils and shopping centres since 1995.

But last year Public Health England issued guidance to local authorities warning about the impact seasonal marketing promotions can have on diet-related diseases.

Cllr Rachel Flowers, the council’s director of public health, also wrote to Coca Cola calling for an end to the 150ml cans being handed out. 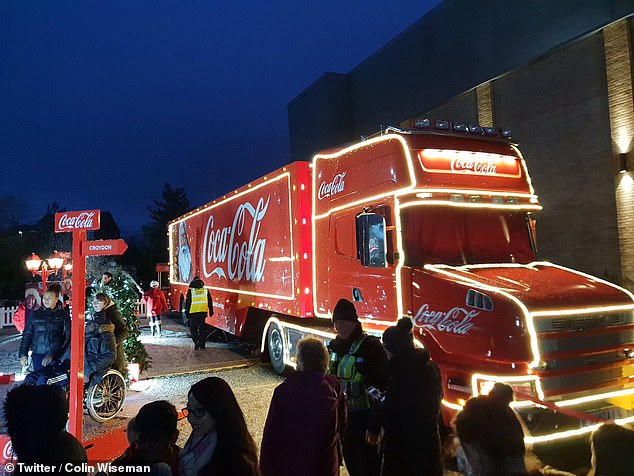 Coca-Cola scaled back its annual Christmas truck tour (pictured here in Croydon) this year, which ended on December 16 after stopping at 24 locations, down from 38 last year

Addressed to Jon Woods, general manager of Coca Cola Great Britain & Ireland, it stated: ‘One 150ml can of classic Coke contains over 16 grams of sugar, nearly the entire maximum daily limit for a six-year-old.

‘It’s with these less than cheerful figures in mind that we ask you to stop promoting sugary drinks during the Coca Cola Christmas truck tour to the general public this year – in particular to children.’

This year, 83 organisations and health campaigners including the Royal College of Paediatrics and Child Health, the British Dental Association, the Royal Society for Public Health and 27 local councils signed the open letter co-ordinated by Sugar Smart calling on Coca-Cola to stop distributing sugary drinks through its Christmas tour.

Cllr Flowers said: ‘Croydon is a ‘sugar smart’ borough, supporting residents to be aware of the adverse health risks of consuming too much sugar including the consumption of high sugar fizzy drinks.

‘Within Croydon we have developed a local campaign and as Coca Cola feels the need to come and visit Croydon for two days, I would like to suggest that we work in parallel at this event to make people aware on the day of simple sugar swaps they can do to reduce sugar in their daily diets. 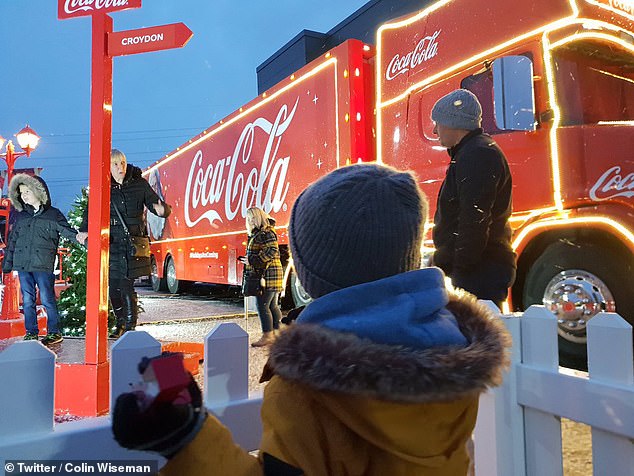 The two 14-tonne lorries (one is pictured in Croydon by Colin Wiseman) decorated with fairy lights and offering free 150ml cans of Coca-Cola, Zero Sugar and Diet Coke have been welcomed by councils and shopping centres since 1995

‘Sugar is the main source of excess calories in our diets and plays a key role in tooth decay, which is why reducing sugar consumption is one of my priorities.

‘Please can I request that Coca Cola goes one step further and completely removes the full sugar original taste coke giveaways from any future promotions in the London Borough of Croydon, and ideally from your holiday promotions anywhere else in the UK.’

Coca Cola, however, went ahead with its annual tradition which saw thousands of people attend.

In response to the Sugar Smart UK open letter, Coca Cola said it would continue to give out free cans of Coca-Cola original taste.

Coca Cola general manager Mr Woods said: ‘This annual event is something that our consumers love and enjoy, and I feel we run it in a responsible way.

‘I believe the actions we have taken as a business to remove sugar from our drinks and focus our marketing on the no sugar variants of Coca Cola show we are committed to acting responsibly and playing our part in addressing some of the challenges you raise.

‘For a few weeks per year thousands of consumers love and enjoy our Christmas truck tour and as long as consumers want it we will continue to run it.’