The vaping devices will be promoted in 30-second television advertisements paid for by Public Health England.

However another official body – the drugs rationing watchdog NICE – has told GPs not to recommend e-cigarettes because there is limited evidence over whether they are safe.

Guidelines it circulated to family doctors yesterday instructed them to offer patients nicotine patches and counselling instead.

Although thought to be considerably safer than tobacco cigarettes, studies have linked long-term use to heart disease and cancer.

Only yesterday a United States study found that the nicotine within the devices may be causing an abnormal heart rate.

The TV adverts are part of Public Health England’s annual ‘Stoptober’ campaign to encourage smokers to quit. They will be screened on terrestrial and digital channels until the end of next month and feature people playing football. 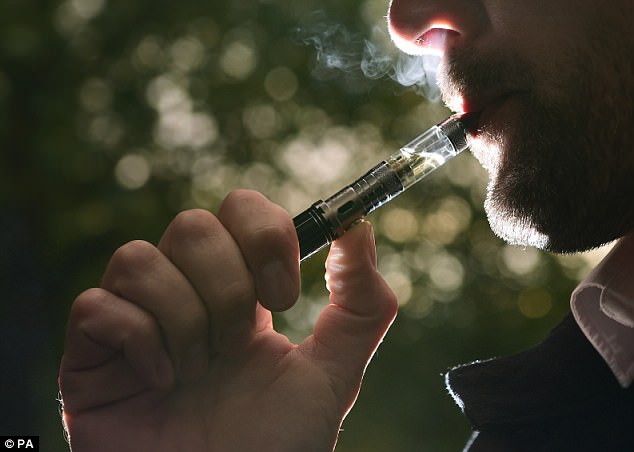 The e-cigarettes will not come free on the NHS – smokers will have to pay between £20 and £30 a time, depending on the brand.

Professor John Newton of Public Health England said: ‘E-cigarettes are now the most popular way to quit in the country with half of all those taking part in Stoptober last year using an e-cigarette.

Heart danger of puffing just one

Puffing just one e-cigarette can affect the functioning of the heart, according to a study out yesterday.

Scientists at the University of California, Los Angeles, found that vaping changed levels of adrenaline and prolonged use could lead to heart disease.

Earlier this month Swedish experts found the devices increased the risk of a symptom linked to heart disease.

Dr Magnus Lundbäck, of the Karolinska Institute in Stockholm, found they raised the blood pressure and the stiffness of the arteries. The World Health Organisation called for e-cigarettes to be banned from public spaces in November. Officials warned of the dangers of ‘passive vaping’, which may cause lung damage, heart complications and stillbirth.

In December 2015 scientists from the University of San Diego found the devices caused cell damage that may lead to cancer. A former US surgeon general has said the health effects were not completely understood.

‘The evidence is clear – vaping is much less harmful than smoking – a fraction of the risk. So, if you’ve struggled with quitting before, an e-cigarette may be the best option for you.’

Professor Gina Radford, the deputy chief medical officer for England, said: ‘The battle against smoking is far from over – it is still the country’s biggest killer, causing 79,000 deaths a year.

‘For every death, another 20 smokers are suffering from a smoking-related disease. Far too many people are still dying as a result of smoking but there has never been a better time to quit.

The culture has changed, strong legislation is in place and effective support is available. It’s never too late to give up – any smoker, no matter what their age, will feel the health benefits within months.’

But Professor Gillian Leng, deputy chief executive of NICE, said: ‘The guideline committee found little evidence of the long-term effects of e-cigarettes on human health and subsequently their use was not included as a recommended aid to stop smoking.

‘However, NICE is keen to hear feedback on the use of e-cigarettes during the consultation on this guideline.

‘We acknowledge that Public Health England and the Royal College of Physicians have stated that e-cigarettes are significantly less harmful to health than tobacco.’

NICE guidance tells doctors to discuss e-cigarettes with smokers, but explain they are not licensed.