Are YOU getting your recommended eight glasses in a day? Drinking sufficient water can prevent or slow heart failure, study finds

Drinking the oft-recommended eight glasses of water a day can held to prevent or slow the onset of heart failure and its precursor, a study has concluded.

Experts from the US National Institutes of Health monitored the health and so-called serum sodium concentrations of 15,792 initially middle-aged people over 25 years.

Serum sodium concentration is a measure of hydration habits based on the amount of sodium in the blood — as the less you drink, the more concentrated it becomes.

When people do not drink enough, the body conserves water in response, activating processes that are known to contribute to the development of heart failure.

Many experts recommend drinking around 2 litres of water daily (1.6–2.1 for women and 2–3 for men), but past studies have shown that many do not achieve this.

Drinking the recommended eight glasses of water a day can held to prevent or slow the onset of heart failure and its precursor, a study has concluded (stock image)

WHY WATER IS VITAL

This is why it is essential for almost every bodily function to work effectively and smoothly.

There is no consensus on how much water a day you should drink, but it is generally agreed that eight glasses of water a day is sensible.

Reasons water is essential include:

1. For clear eyes and full hearts

Water lubricates the eyes to keep them moist and help vision. It also plays a role in pumping oxygen through the body, which is key for heart health.

Cartilage is 80 per cent water — so those who don’t drink enough have a higher risk of joint pain and injuries.

3. For clarity of thought

The brain is used to a certain amount of water. Dehydration can lead to dizziness and slower reactions.

Without waters, stools do not break down properly in our guts and the stomach can fill with acid, risking stomach ulcers, colon cancer, heartburn and constipation.

When the blood lacks water, it thickens, increasing blood pressure.

The research was conducted by Natalia Dmitrieva of the US National Institutes of Health and colleagues.

‘Our study suggests that maintaining good hydration can prevent or at least slow down the changes within the heart that lead to heart failure,’ Dr Dmitrieva.

‘The findings indicate that we need to pay attention to the amount of fluid we consume every day and take action if we find that we drink too little.’

In their study, the team monitored 15,792 middle-aged adults over the course of five evaluations which spanned a 25-year-period.

The team assessed each participant’s changing serum sodium concentration and also incidences of both heart failure and its precursor, so-called left ventricular hypertrophy, in which the walls of the heart’s left ventricle thicken.

Based on their average serum sodium concentration during the opening two visits — which were conducted in the first three years of the study period — the participants were divided into one of four groups.

The researchers found that having a higher serum sodium concentration in midlife was associated with both a higher risk of left ventricular hypertrophy and heart failure later in life.

This finding held even when the team accounted for other factors that can cause heart failure to develop, including age, blood cholesterol and glucose levels, blood pressure, body mass index, kidney function, sex and smoking status.

Specifically, every 1 mmol/l increase in midlife serum sodium concentration was associated with a 1.2 and 1.11 times increase in left ventricular hypertrophy and heart failure, respectively,  after 25 years had passed.

The risks of both conditions between the ages of 70–90 began to increase after the participant’s midlife serum sodium levels exceeded 142 mmol/l. 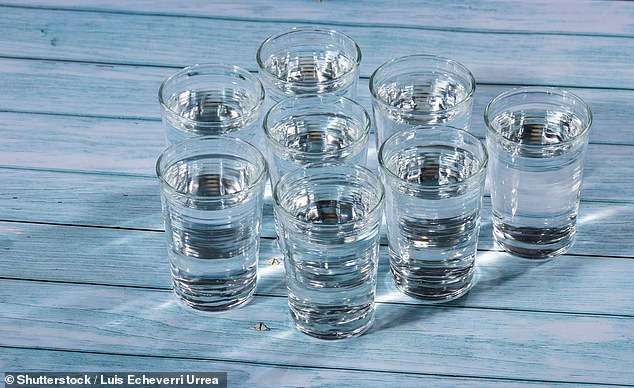 Health experts recommend drinking around eight glasses, or 2 litres, of water daily (1.6–2.1 for women and 2–3 for men) — but past studies have shown that many do not achieve this

‘The results suggest that good hydration throughout life may decrease the risk of developing left ventricular hypertrophy and heart failure,’ said Dr Dmitrieva.

‘In addition, our finding that serum sodium exceeding 142 mmol/l increases the risk of adverse effects in the heart may help to identify people who could benefit from an evaluation of their hydration level.

‘This sodium level is within the normal range and would not be labelled as abnormal in lab test results — but could be used by physicians during regular physical exams to identify people whose usual fluid intake should be assessed.

The full findings of the study were presented at the 2021 congress of the European Society of Cardiology, which is being held virtually from August 27–30.

WHAT IS HEART FAILURE?

Heart failure means that the heart is unable to pump blood around the body properly. It usually occurs because the heart has become too weak or stiff.

Heart failure doesn’t mean your heart has stopped working – it just needs some support to help it work better. It can occur at any age, but is most common in older people.

Heart failure is a long-term condition that tends to get gradually worse over time. It can’t usually be cured, but the symptoms can often be controlled for many years.

The main symptoms of heart failure are:

Some people also experience other symptoms, such as a persistent cough, a fast heart rate, and dizziness.

See your GP if you experience persistent or gradually worsening symptoms of heart failure.