Health experts say US ‘fooled’ into relaxing restrictions as weekly infections fall below 400,000

Coronavirus cases, hospitalizations and deaths may be falling one year into the pandemic, but public health experts are warning not to relax precautions just yet.

On Thursday, the U.S. recorded 48,223 new infections with a seven-day rolling average of 54,840, which is the lowest figure seen since October 15, according to a DailyMail.com analysis of Johns Hopkins University data.

This is the first time that the weekly total has fallen below 400,000 in five months, when a total of 373,786 cases were recorded between October 9 and October 5

In addition, 1,463 deaths were reported on Thursday, with a seven-day average of 1,560, a figure not seen since December 1.

However, with just one in 10 Americans fully vaccinated, officials says the U.S. is nowhere near the level needed for herd immunity and Americans are being ‘fooled’ into easing restrictions.

What’s more, if states don’t keep up with mitigation measures, a new projection estimates that an additional 23,000 people could die of COVID-19 by the beginning of April.

On Thursday, the U.S. reported 48,223 new infections with a seven-day rolling average of 54,840, which is the lowest figure seen since October 15 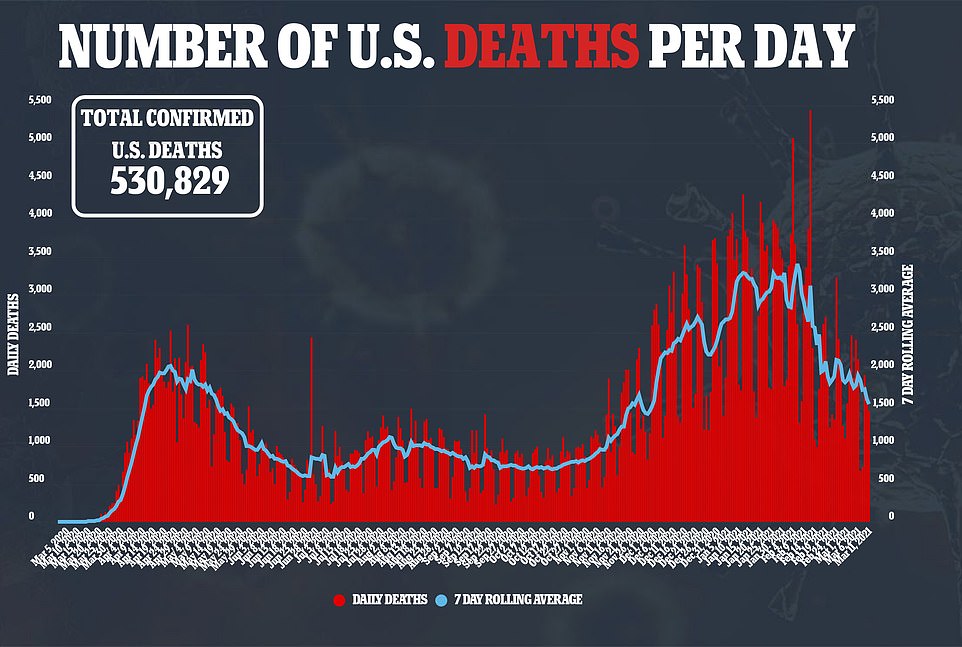 Data also showed that there were 1,463 coronavirus deaths on Thursday, with a seven-day average of 1,560, a figure not seen since December 1 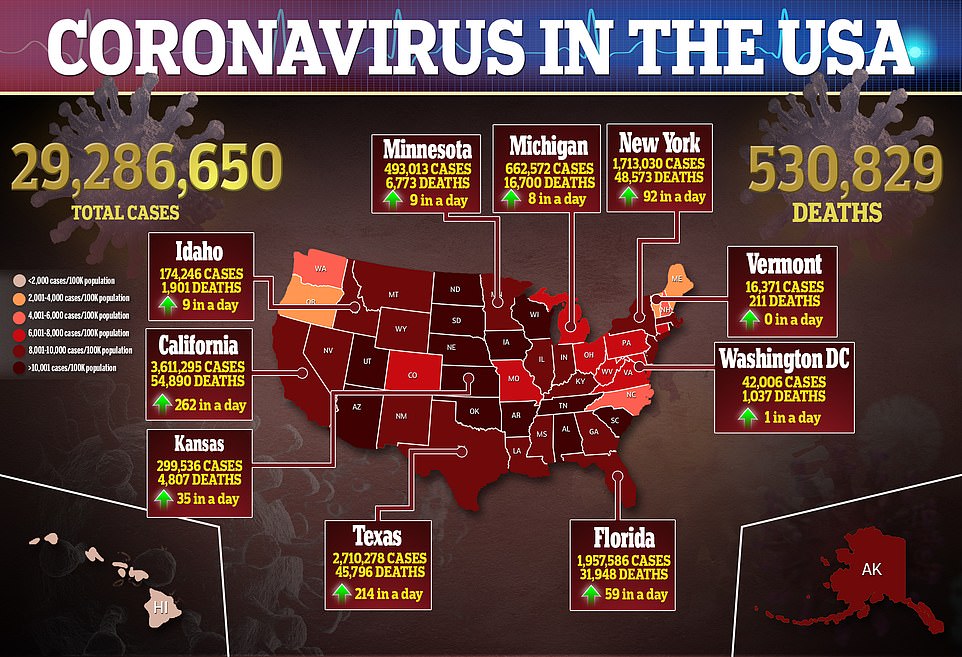 Weekly coronavirus infections have fallen below 400,000 for the first time since mid-October with 383,883 COVID-19 cases reported in the U.S. from March 5 to March 12

‘I think we are going to get fooled,’ Dr Paul Offit, director of the Vaccine Education Center at the Children’s Hospital of Philadelphia, told CNN.

‘I think what’s going to happen is you’re going to see that as we enter the summer months, numbers are going to go down, people will think great, we’re good.’

During summer 2020, states began easing restrictions as daily cases and deaths began falling – only to be met with a second wave.

So far, 64 million Americans – 19.3 percent of the population – have received at least one dose of the vaccine and 33.8 million – 10.2 percent – are fully immunized, according to the Centers for Disease Control and Prevention (CDC).

Over the last five days, an average of two million people in the U.S. have been vaccinated every day, up from 1.6 million that were done the previous week.

But Offit says that four out of every five Americans need to have immunity – either through vaccines or through natural immunity – for the county to achieve herd immunity.

‘And then, if we don’t get to what I think is going to be at least 80 percent population immunity from natural infection or immunization, when the winter comes, you’re going to see a surge again,’ he told CNN.

A new model seems to agree with Offit and suggests that, if the policies that are currently in place remain as they are, the death toll could exponentially rise.

Forecasts published on Thursday by the University of Washington’s Institute for Health Metrics and Evaluation (IHME) project there could be as many as 23,000 deaths over the next two weeks. 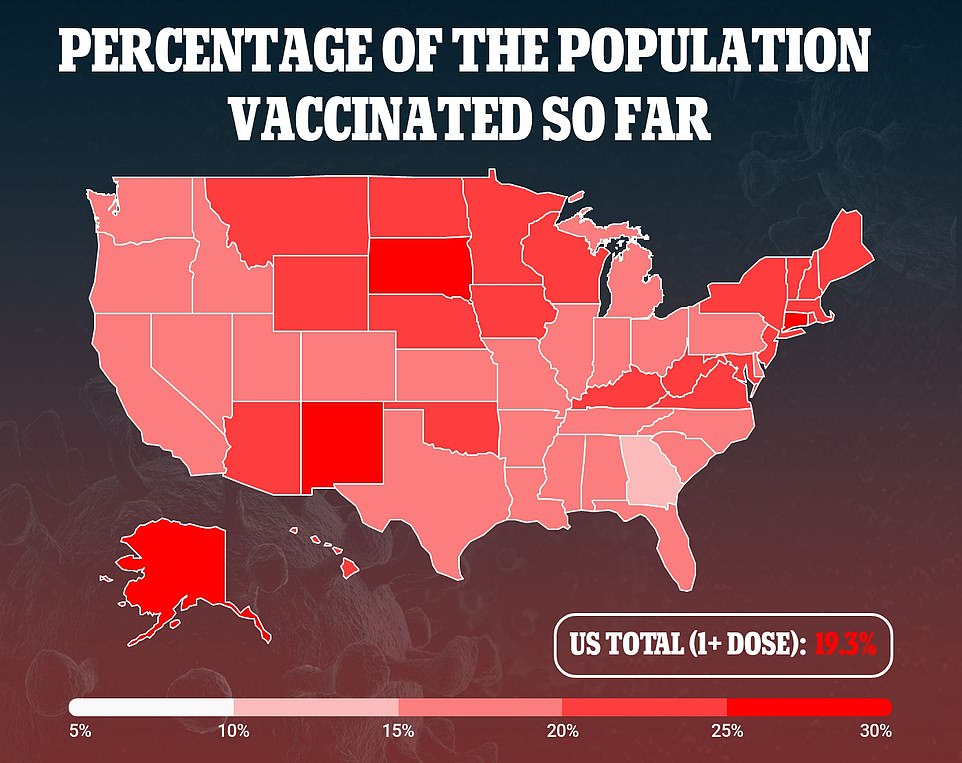 Health experts say Americans are being ‘fooled’ into relaxing restrictions too soon because only one in 10 Americans is fully immunized, with 19.3% having received one dose 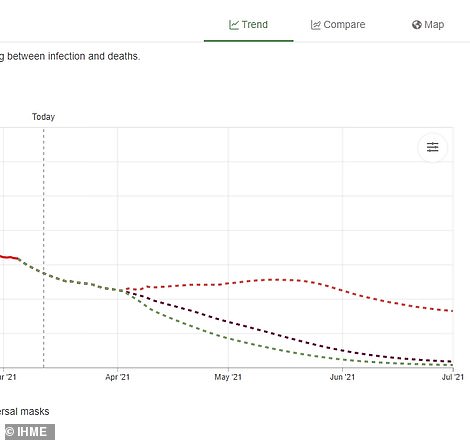 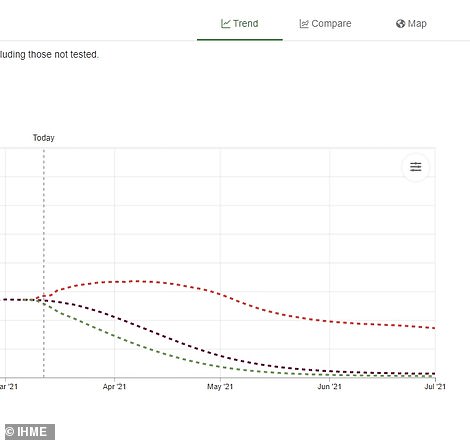 The forecast also projects the seven-day rolling average will not fall below 1,000 until mid-April with an absolute worse-case scenario of not reaching three digits until mid-June (left). In another prediction, the model suggests that cases will rise around late March and decline around late May (right)

This would bring the death toll to a total of 553,682 deaths by April 1, with the seven-day rolling average not falling below 1,000 until mid-April.

In an absolute worst-case scenario, including the spread of variants – and mobility returning to pre-pandemic levels – the U.S. could see the rolling average not be three digits until mid-June.

The forecasts come at a perilous point for the country’s ability to control the spread of the virus, according to the CDC.

‘On the one hand, you have this hyper-transmissible virus that could result in another surge after spring break.

‘On the other hand, we are scaling up vaccinations so very fast, and what we really want to do is just give those vaccines a fighting chance to overcome and not let this virus surge again.’

Walensky also addressed the recently released guidelines from the CDC about whom fully vaccinated people can take their masks off around. 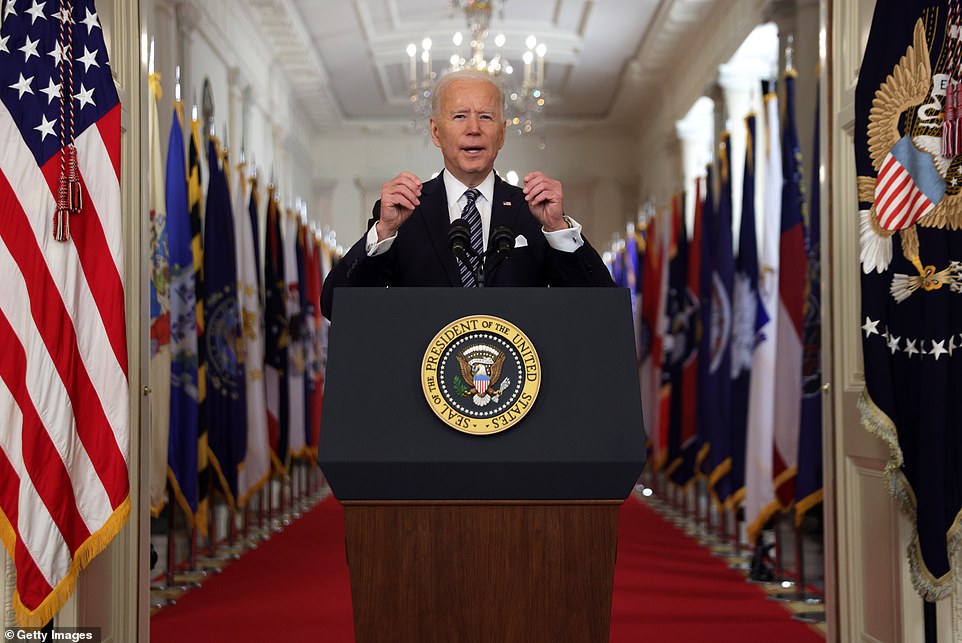 In a nationally televised address on Thursday, President Joe Biden said (above) he would be directing all states, tribes and territories to make all adults eligible for vaccination by May 1 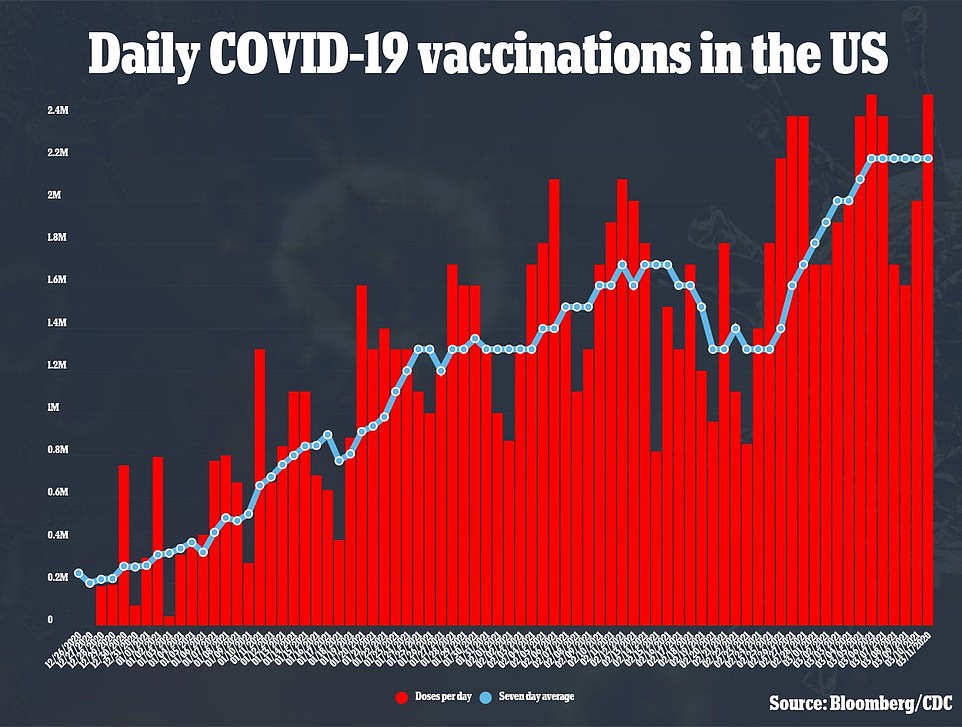 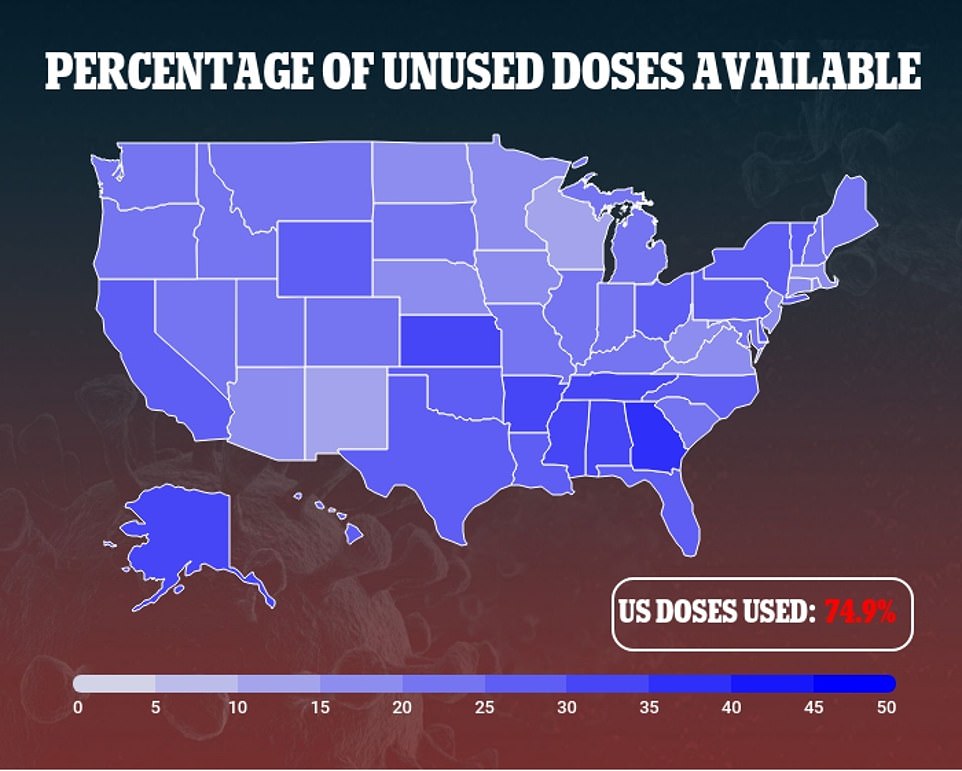 However, the federal agency still advised against large gatherings and travel, and some have complained the  recommendations are too strict.

‘We have to be humble with this virus,’ Walensky told anchor Lester Holt.

‘Every time we felt like we had it under control, we had an enormous surge.’

She said the CDC plans to update the guidelines against once more people become immunized and case numbers decline even further.

In a nationally televised address on Thursday, President Joe Biden said he would be directing all states, tribes and territories to make all adults eligible to be vaccinated no later than May 1 in hopes of a somewhat more normal Fourth of July than last year.

‘Here’s the point: If we do all this, if we do our part, we do this together, by July the 4th, there’s a good chance you, your families and friends will be able to get together in your backyard or in your neighborhood and have a cookout and a barbecue and celebrate Independence Day,’ he said. 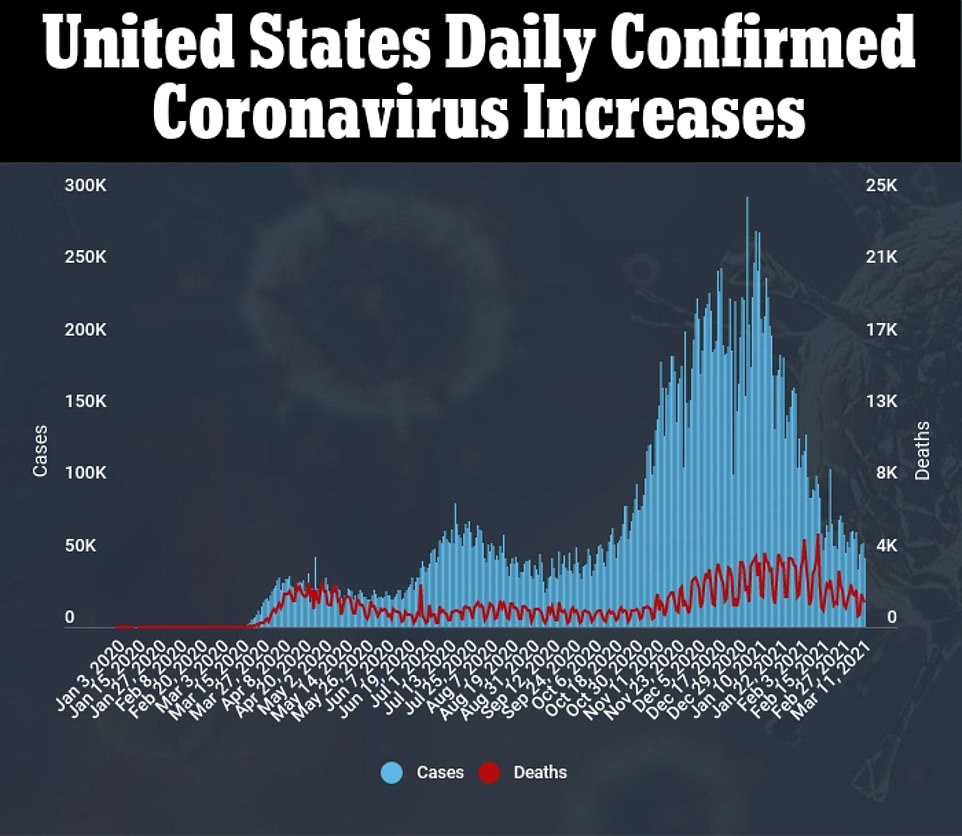