HEALTH: For when the going gets tough

By Sarah Stacey for The Mail on Sunday

Few of us escape experiences – big and small, short- and long-term – that leave us feeling life has kicked us in the teeth. How we deal with them can affect the course of our lives. The supermodel Lauren Hutton once told me the only way she had been able to shift her negative attitude at a very dark time in her life was to face the demons that threatened to overwhelm her. It enabled her to move forward and take risks, from exploring new career paths to riding powerful motorbikes.

Confronting life’s challenges and carrying on when the going gets tough demands courage, grit and resilience, qualities combined in the Finnish concept of ‘sisu’ (say it ‘sis-uh’). Although it originated at least 500 years ago sisu is still relevant, according to Joanna Nylund, author of Sisu: The Finnish Art of Courage, a pocket-sized book that everyone could benefit from reading in this age of uncertainty.

We all have inner reserves of strength, but we may not be aware of them, partly because of the constant din of everyday living

Although sisu is about a mental attitude, it literally means the guts inside our bodies, stemming from the ancient belief that that is where your strength resides – ‘the fire in one’s belly’, Joanna explains. (This is especially fascinating given new research on the vital two-way communication between our guts and our brains, which I wrote about last week.)

Sisu came to the fore in autumn 1939 when Finland was invaded by the Soviet Union. The outlook was grim, but it became known as Finland’s finest hour. Although vastly outnumbered in soldiers, tanks and aircraft, the tiny nation repelled the invaders, a triumph that was largely put down to sisu. But it wasn’t just guts, guile and determination that prevailed; sisu also needs teamwork.

The healing power of nature

‘Sisu comes into its own when we are under pressure,’ writes Joanna. ‘In difficult times, we need to be able to lean on each other. Confiding in someone when you feel vulnerable will not only make you feel better, it will strengthen your bond to that person.’ Using that principle in any community – family, friends, neighbourhoods or workplaces – creates a positive circle where everyone can tap into support when they need it.

This gem of a book gives lots of practical suggestions for discovering and nurturing the qualities that will help you to bounce back and fight when life knocks you down or when your stomach is churning because you’re anxious about a challenge such as a job interview.

We all have inner reserves of strength, but we may not be aware of them, partly because of the constant din of everyday living, says Joanna. ‘Clear and calm your mind through meditation, prayer, deep-breathing or spending time in nature, which serves as a natural antidepressant [see box, above].’

Always consult your doctor if you have a medical problem 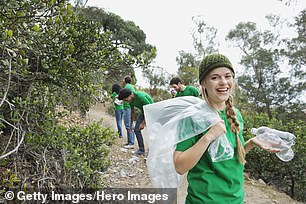 Teams of ploggers worldwide are battling the plague of plastic in the ocean by collecting rubbish from beaches, while inlanders plog around streets and parks

Scandinavia seems to be leading the way in wellbeing at the moment. Now the Swedes are popularising the genius notion of ‘plogging’, where people go jogging and pick up litter at the same time. It tones your legs, increases your core strength from squatting to pick up rubbish and offers a feel-good boost for your soul.

Teams of ploggers worldwide are battling the plague of plastic in the ocean by collecting rubbish from beaches, while inlanders plog around streets and parks. All you need to get fit and save the planet is running gear, a litter bag and a pair of gloves in case the rubbish is less than savoury.