An investigation has been launched into the death of 27 babies at two maternity units in Wales.

A report said patients are at risk at the two hospitals run by NHS Cwm Taf University Health Board after serious failings in care.

A total of 43 incidents have been reported to the Welsh Government, including 22 stillbirths and five deaths shortly after birth in two years.

Maternity services provided by the maternity units have been put into special measures after a report in October.

An investigation into maternity units at Cwm Taf University Health Board, which has two hospitals in South Wales, raised ‘significant concerns’. Monique Aziz’s baby son died days after leaving hospital and is still demanding answers about the care she received 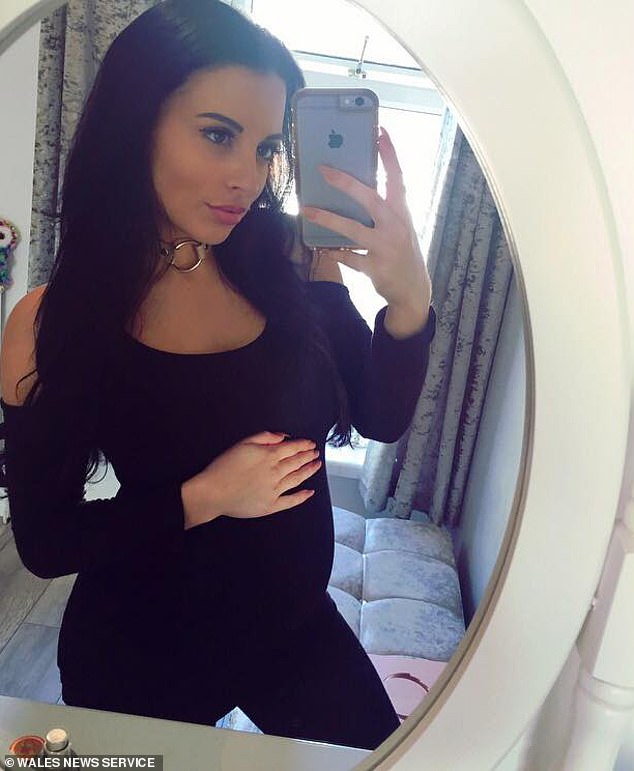 An NHS trust has launched an investigation into 43 serious incidents including baby deaths and stillbirths at two maternity units. Pictured, Ms Aziz when she was pregnant

An independent review of 43 pregnancies between January 2016 and September 2018 will be undertaken, while an independent panel will oversee maternity services to drive improvements.

In total there were 43 incidents, but only 13 had been recorded correctly, the report found. Around 22 stillbirths, five neonatal deaths and 16 complications in labour were found.

The review said staff were under ‘extreme pressure’ at the Royal Glamorgan Hospital in Llantrisant and Prince Charles Hospital in Merthyr Tydfil, and they worked under ‘sub-optimal’ clinical and managerial leadership.

There were 11 areas of immediate concern including the lack of availability of a consultant obstetrician and inadequate support for junior doctors.

Low staffing levels, lack of support for junior doctors and lack of awareness of guidelines were criticised.

A separate report said some women’s suspicions and concerns about their pregnancies were ignored by staff, which then led to tragic outcomes including stillbirth and neonatal death of their babies.

Monique Aziz, from Coed-Ely, Rhondda Cynon Taff, told the BBC in October last year that she just wanted to know ‘what went wrong’.

Her baby son died days after leaving hospital and is still demanding answers about the care she received.

She said: ‘I just want to know if he would have still been here if things had been done differently.’

Another woman told the report: ‘I’m broken from the whole experience, the lack of care and compassion.

‘That terrible experience I was put through because of the staff that treated me. That experience will stay with me forever.

‘I felt worthless, like I did not matter – that’s how I felt.’

The report also said many women and families received no bereavement counselling or support after the loss of a baby, and continue to experience emotional distress.

On Tuesday, Welsh Health Minister Vaughan Gething apologised to families affected by failures at after 43 potentially serious incidents were identified.

Mr Gething, who commissioned the report in October last year, said it made ‘very difficult reading’ and its findings were ‘serious and concerning’.

He said: ‘I have been deeply saddened by this report. I cannot begin to appreciate quite how distressing it will be for families who have been directly affected by these failures.

‘I am also conscious of the concern that will be felt by families currently receiving care in these hospitals and at a time when such a significant life event should be a moment of joy.

‘There is no doubt that this report confirms the service has fallen well short of the expectation that I have for care provision anywhere in Wales.

‘I am determined that the actions I am announcing today will drive the changes necessary to improve maternity services in Cwm Taf.

‘It is vitally important that this work provides reassurance for families currently receiving care in their hospitals.’

Following the report’s publication, Plaid Cymru called on Mr Gething to resign, saying the failings followed a series of others at other health boards in Wales in recent years.

Shadow health minister Helen Mary Jones AM said: ‘What’s happening at Cwm Taf is part of a consistent pattern of failure. From these appalling failings in maternity services, to years of under-performance at Betsi Cadwaladr in the North, the mistreatment of patients at the Tawel Fan ward at Ysbyty Glan Clwyd, and the poor patient care identified in Bridgend in the Andrews report.

‘This pattern of poor performance has now reached a point where the Health Minister must resign. Time after time, he has failed to get to grips with the significant challenges facing the Welsh NHS, such that his position is now untenable.’