A ten-year-old cancer survivor is the star of an alternative Christmas advertisement that is pulling on the nation’s heart strings.

Ellie Mae Wile-Dunne, who was diagnosed with the the blood cancer acute lymphoblastic leukaemia when she was four, is starring in cancer charity CLIC Sargent’s online ad.

She plays Kid Santa, a mini-Father Christmas who grants the wishes of unwell children – and is seen helping cancer sufferer Jack decorate his family tree.

The ad has had 200,000 views on social media and the charity hopes to remind viewers of the financial toll that comes with caring for a sick child.

Ellie Mae’s father Jim, 56, gave up his work as a photographer and mum Nikki, 52, took six months’ sick leave as Ellie Mae spent 93 days in hospital. Nikki says: ‘It took a massive toll on us all, emotionally, physically and financially.’

Ellie Mae, from Horsham, West Sussex was given the all-clear in March 2013.

Patients suffering from a chronic lung disease could now relieve their symptoms in the comfort of their own homes.

Chronic Obstructive Pulmonary Disease (COPD) affects 1.2 million Britons and includes conditions such as bronchitis and emphysema that inflame airways and damage the lungs, making it difficult to breathe. Sufferers are often elderly and have difficulty travelling for treatment.

Now a smartphone app, called Kaia Health COPD, connects patients with physiotherapists and provides relaxation exercises and medication advice at the click of a button.

A trial showed patients using the app for 20 days saw symptoms such as coughing, breathlessness and poor sleep improve by nearly 12 per cent.

What’s the difference between dementia and Alzheimer’s?

DEMENTIA: An umbrella term for a range of symptoms that affect memory and reasoning which includes vascular dementia, mild cognitive impairment and Alzheimer’s disease.

ALZHEIMER’S: One form of dementia characterised by a slow decline in memory and cognitive function, but impossible to diagnose with 100 per cent accuracy without a post-mortem.

A new torch that makes bacteria glow red can speed up the healing of chronic wounds in NHS hospitals. The hand-held MolecuLight can cut healing time from 200 days to just 22.

It enables doctors to assess wounds such as foot ulcers and bed sores more quickly and accurately, and cuts the number of unnecessary antibiotics prescribed.

Currently, doctors can spot an infection in a wound only once it causes obvious symptoms such as redness, swelling or a bad smell. Swabs are taken and sent for analysis, which can take several days.

The MolecuLight, which has been adopted in eight NHS hospitals, uses blue light which naturally reacts with compounds in the bacteria, making them light up immediately.

The elixir of life? Tea

A daily cuppa could be the key to a long life. Tea-lovers who drink at least three cups every day can dramatically slash their risk of dying early. Scientists at the Karolinska Institute in Sweden found those on a diet including tea, vegetables, fruit, red wine and wholegrain bread were 20 per cent less likely to die from heart disease and had a 13 per cent reduced risk of death from cancer.

The research followed more than 68,000 men and women aged 45 to 83 for 16 years, recording daily consumption of such anti-inflammatory foods against inflammatory foods including chips, unprocessed and processed red meat and soft drinks.

Skipping isn’t just for school kids – it could make you big and strong.

Researchers from the Chinese University of Hong Kong measured bone density in 176 teenagers over a two-year period. 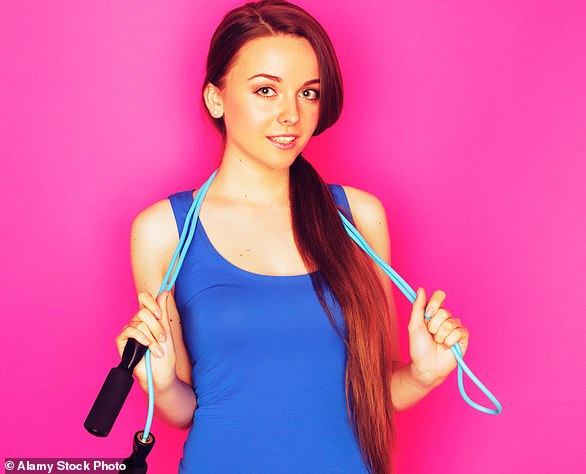 Skipping (pictured) can help reduce the risk later in life of osteoporosis. And can also help stimulate the process of bone formation

Those who regularly skipped had higher scores in the heel bone than those who never skipped or engaged in other types of exercise such as running.

Skipping also helped to reduce their risk later in life of osteoporosis.

The researchers explained that load-bearing exercise – like skipping – stimulates the process of bone formation which occurs most rapidly during teenage years.