A breast cancer drug dubbed ‘magical’ by experts is now being made available to more NHS patients.

Ribociclib, also known by the brand name Kisqali, costs £35,000 a year and is one of a new class of targeted therapies that act on specific characteristics of tumours rather than the ‘carpet-bombing’ approach of chemotherapy, which destroys healthy cells too.

It has been shown to help when other drugs have stopped working. The daily pill allows women with the most common type of advanced, incurable breast cancer to live longer, healthier lives by blocking an enzyme that helps tumour cells divide.

In April, the National Institute for Health and Care Excellence barred doctors from offering the drug to patients who were also being given an older, commonly prescribed breast cancer hormone drug, fulvestrant – to the anger of campaigners and doctors. But the watchdog has now reversed its decision, recognising that the combination of fulvestrant and ribociclib controlled the disease for an additional eight months, compared to fulvestrant alone.

Oncologist Dr Mark Verrill, of the Freeman Hospital in Newcastle, says: ‘By putting these two drugs together, we are roughly doubling the time we can control the disease, which is an important step forward.’

Could broccoli hold the secret to beating painful osteoarthritis? That’s what researchers at the University of East Anglia and Norfolk and Norwich Hospital aim to find out as part of a three-month trial that could see the humble vegetable become a mainstream treatment for the agonising condition, which affects 8.5 million people in the UK. 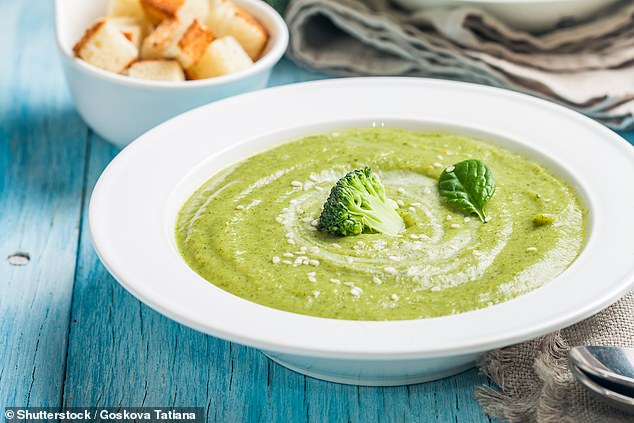 The Broccoli in Osteoarthritis trial follows tests on mice which showed that a chemical in the plant called sulforaphane slows down the destruction of cartilage in joints.

Researchers are now recruiting 50 volunteers with painful joints to compare the effects of eating broccoli soup with one which looks and tastes the same but is actually broccoli-free.

Patients with the most aggressive form of brain cancer are to be offered a radical new treatment that involves blasting tumours with powerful radiation during surgery.

But those referred to the new INTRAGO 2 trial at The London Clinic, led by neurosurgeons Professor Keyoumars Ashkan and Ranj Bhangoo, will also have radiation delivered to the cavity left by the tumour while in theatre, to kill any microscopic cancer cells left behind. Scientists say multiple sclerosis could one day be diagnosed by a breath test. When we exhale, we release microscopic particles and compounds. Most originate in the bloodstream, so they can reveal hidden physiological changes happening in the body, including disease activity.

Early trials have already indicated the presence of specific breath compounds in MS, which researchers hope to confirm and ultimately translate into a new diagnostic tool.