Health: Polypill of 4 drugs cuts heart attacks and stroke by up to 40 per cent if taken with aspirin

The risk of heart attacks, strokes and other cardiovascular problems can be cut by up to 40 per cent by taking a ‘polypill’ of four different medications with aspirin.

Experts led from Canada found that one of the pills alone each day could lower the risk of cardiovascular incidents in intermediate risk subjects by around 20 per cent.

However, the effectiveness of the pill — which contains three common blood pressure drugs and a fourth that lowers blood fat levels — doubled with aspirin.

Low doses of aspirin are known to help lower the risk of heart attacks and stroke as the drug limits the blood’s ability to clot and form damaging blockages.

Cardiovascular diseases account for some 18 million deaths annually — with 80 per cent of cases occurring in low- and middle-income countries. 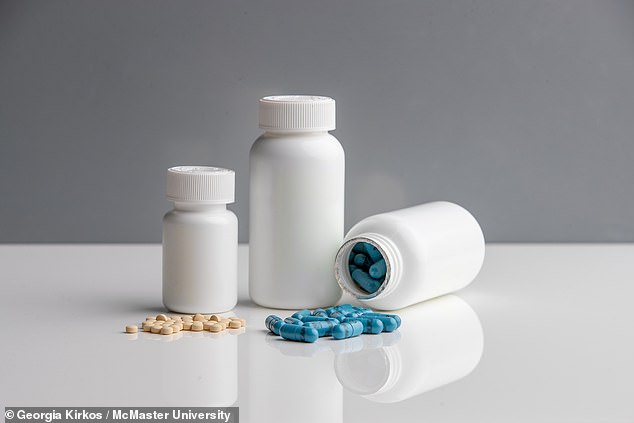 The risk of heart attacks, strokes and other cardiovascular problems can be cut by up to 40 per cent by taking a ‘polypill’ of four different medications (right) with aspirin (left)

‘This is the start of a transformational approach to preventing heart disease,’ said paper author and medical researcher Salim Yusuf of Ontario’s McMaster University.

‘We could save millions of people from experiencing serious heart disease or stroke each year with effective use of the polypill and aspirin.’

‘A polypill is not only effective, it is likely to be cost-effective since it is based on using commonly used generic drugs,’ added fellow paper author Prem Pais, of the St. John’s Medical College and Research Institute in Bangalore, India.

‘A polypill is convenient for patients to use as it combines several effective drugs in a single pill and is taken once a day, which would be expected to improve adherence.’

In their study, the researchers monitored the health of 5,714 people from nine countries — including, in particular, India and the Philippines — for an average period of 4.6 years.

Each participant was of intermediate risk for cardiovascular problems — but had no existing history of heart disease or stroke — and the men in the study were aged 50 and over, while the women were as young as 55.

They found that only 4.4 per cent of the participants who took the polypill alone had either a heart attack, a stroke, revascularization procedures — such as angioplasty or heart surgery — or fatal cardiovascular problems.

This was compared to 5.5 per cent among those who took the placebo.

Incidence of the same was 4.1 per cent among patients who took only aspirin, compared to 4.7 for those given a corresponding placebo.

Meanwhile, those who took both the polypill and the aspirin saw greater benefits than their double placebo counterparts — with 4.1 per cent experienced a serious cardiovascular event as compared to 5.8 per cent. 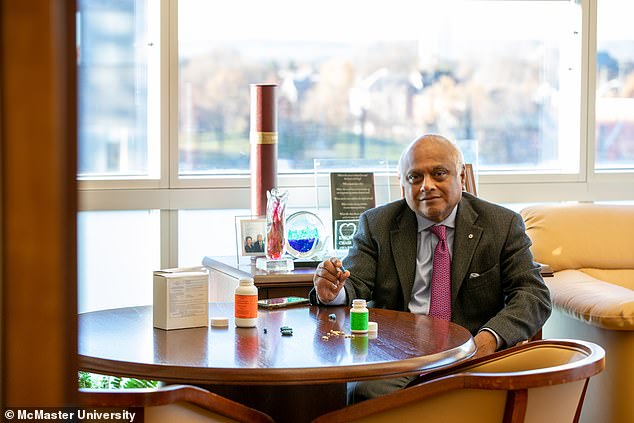 ‘This is the start of a transformational approach to preventing heart disease,’ said paper author and medical researcher Salim Yusuf of Ontario’s McMaster University, pictured here with the polypill from the study. ‘We could save millions of people from experiencing serious heart disease or stroke each year with effective use of the polypill and aspirin’

‘The results of the study have implications for reducing the burden of cardiovascular diseases globally,’ said Dr Pais.

‘Even if only one third of eligible people receive a polypill, its use will likely avoid millions of individuals experiencing serious cardiovascular diseases worldwide.’

‘It also opens the way for a community-based approach with health workers working under a physician’s supervision, enabling the pill to reach a large number of people.’

The polypill evaluated in the study included 100 milligrams of atenolol, 25 mg of hydrochlorothiazide,10 mg of ramipril and 40 mg of simvastatin. Aspirin was given in doses of 75 mg of each day.

At present, this polypill composition is available in India and a few countries in Africa. Other polypill formulations will naturally have different levels of efficacy — and such are being used or tested in Europe, America, China and South Korea.

The next generation of polypills will likely have greater reductions in risk factors and so can be even more effective at cutting heart disease as the formulations of polypills improve,’ predicted Professor Yusuf.

‘We have recognized for a long time that primary prevention is important in cutting down heart attacks and strokes,’ said cardiologist  John Cairns of the University of British Columbia, who was not involved in the present study.

These researchers have made a brilliant step ahead, with the factorial design testing the polypill with and without aspirin, and there is sufficient power in the study to know the results are very convincing.’

The full findings of the study were published in the New England Journal of Medicine.