Health: Poor diets during pregnancy can set children up on a path to weight gain and obesity

Mothers who eat an unhealthy diet during their pregnancy may be setting up their children on a path to weight gain and obesity, a study has warned.

Researchers from the US investigated the links between an expectant mother’s diet and their children’s growth rates between birth and adolescence.

The team found that a pregnancy diet rich in inflammatory foods including sugars, artificial trans fats and processed meats was associated with greater weight gain in children between the ages of three and ten years of age.

Previous studies have shown that weight gain early in childhood is linked to greater risk of obesity later in childhood, as well as adolescence and adulthood.

Weight issues may begin in pregnancy, the team said, as the pathways that program metabolism, growth and eating behaviours are sensitive to in utero influences.

The team recommend that pregnant women consider a Mediterranean diet, which is high in plant-based foods, fish and unsaturated fats, has a low inflammatory potential and may benefit both mother and child’s health.

However, the researchers cautioned, individual nutritional needs during can vary and women should consult their doctor to choose their most appropriate diet.

Expectant mothers who eat an unhealthy diet during their pregnancy  may be setting up their children on a path to weight gain and obesity, a study has warned (stock image)

A Mediterranean diet incorporates the traditional healthy living habits of people from countries bordering the Mediterranean Sea, including France, Greece, Italy and Spain.

The Mediterranean diet varies by country and region, so it has a range of definitions.

But in general, it’s high in vegetables, fruits, legumes, nuts, beans, cereals, grains, fish, and unsaturated fats such as olive oil. It usually includes a low intake of meat and dairy foods.

The Mediterranean diet has been linked with good health, including a healthier heart.

‘We wanted to better understand dynamic growth changes that occur from childhood through adolescence as a result of maternal nutrition in pregnancy,’ the neonatologist from the Brigham and Women’s Hospital in Boston added.

‘We specifically wanted to assess whether there are distinct periods between birth and adolescence when rates of weight gain are more susceptible to the programming effects of nutrition in pregnancy.’

In their study, Dr Monthé-Drèze and colleagues analysed data on 1,459 mother-child pairs collected by Project Viva — an ongoing study into maternal and child health being conducted at the Harvard Pilgrim Health Care Institute in Massachusetts.

During their respective pregnancies, each mother was asked to complete questionnaires on their dietary intake, which the researchers interpreted through the lens of three different dietary indices.

These included the Dietary Inflammatory Index, the Mediterranean diet score, and the Alternate Healthy Eating Index for Pregnancy.

After giving birth, each child was weighed and measured several times between birth and adolescence, from which body mass index (BMI) values were calculated.

Finally, the researchers analysed how each mother’s dietary index scores were associated with their offspring’s growth trajectory.

‘Maternal nutrition during pregnancy may have a long-term impact on children’s weight trajectories,’ said Dr Monthé-Drèze. 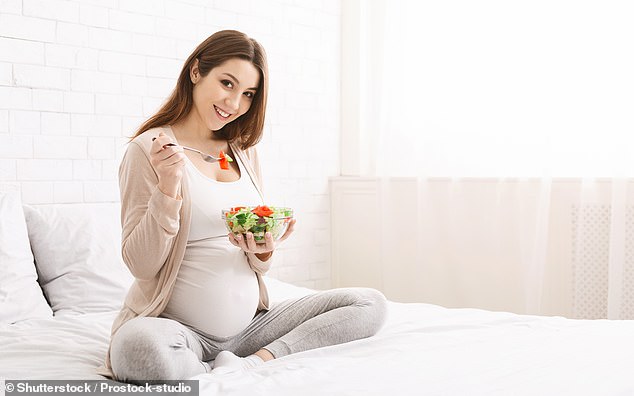 The team recommended that pregnant women consider a Mediterranean diet, which has a low inflammatory potential and may benefit both mother and child’s health

HOW TO CALCULATE BODY MASS INDEX 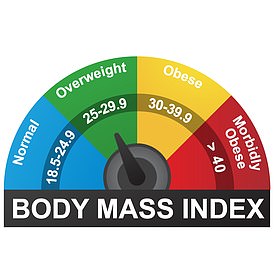 Furthermore, she added, the findings suggest ‘there are specific developmental periods when nutrition during pregnancy may influence offspring growth.’

‘We found that a pregnancy diet with higher inflammatory potential was associated with faster BMI growth rates in children between three and ten years of age.’

We also found that lower adherence to a Mediterranean-style diet during pregnancy was associated with higher BMI trajectories through adolescence.’

According to the team, the mothers’ score on the Alternate Healthy Eating Index did not appear to predict their child’s growth trajectory.

‘It is important to counsel women who are pregnant or planning to become pregnant on the importance of a healthy diet during pregnancy,’ said Dr Monthé-Drèze.

‘In particular, women who are pregnant or may become pregnant should consider a Mediterranean diet, which may not only benefit their own health, but may also help their child maintain a healthy weight.’

A Mediterranean-style diet, the team explained, has a low inflammatory potential and is rich in vegetables, fruits, legumes, nuts, low-mercury fish, and good quality oils such as extra virgin olive oil.

It provides an important source of vitamin D, omega-3 polyunsaturated fatty acids and other nutrients that have been shown to be beneficial for offspring health.

‘Research has shown that the foods that we eat during pregnancy may influence the metabolism of the growing child as well as their eating behaviours and food preferences,’ explained Dr Monthé-Drèze.

‘Additionally, the food choices women make during pregnancy are likely to be similar to food choices they offer their children,’ she added.

‘Therefore, it is conceivable that maternal nutrition during pregnancy may be related to long-term weight issues in the offspring.’

‘Additional research is therefore needed to better understand the relationship between maternal diet in pregnancy and child BMI and weight gain patterns.’

The team also suggested that doctors should evaluate the dietary habits of mothers during pregnancy to identify kids who might be at a high risk of weight gain.

Furthermore, they should encourage nutritious food choices to support healthy weight throughout infancy, childhood, and adolescence, they added.

‘As scientists and as a society as a whole we have failed to stem the tide of rising childhood obesity,’ said Dr Monthé-Drèze.

This failure, she added, ‘costs mothers and children dearly.’

‘There is reason to be optimistic about the future — however, we must conceptualize the problem differently in order to solve it.’

The full findings of the study were published in The American Journal of Clinical Nutrition.