Health: Premature babies feel less pain when they hear their mothers’ voice while in intensive care

While undergoing procedures in intensive care, premature babies feel less pain if they can hear their mother’s voices talking to them, a study has concluded.

Premature babies — those born before 37 weeks — spend the first days-to-weeks of their lives in incubators, in which time they undergo various medical procedures.

These can include the collection of blood samples for testing, the insertion of feeding tubes and intubation for those that need help breathing.

The problem, however, is that it is often not possible to give the babies pharmaceutical painkillers — as such can interfere with neurological development.

Researchers from the University of Geneva have shown that having the mother present during procedures can lower pain levels and raise levels of oxytocin.

Oxytocin is a hormone that is associated with both happiness and attachment.

The findings, the team said, highlight the importance of parents being present while their baby is in intensive care and undergoing an important stage of development.

While undergoing procedures in intensive care, premature babies feel less pain if they can hear their mother’s voices, a study has concluded. Pictured: a mother soothes her child

The study was led by the laboratory of neuropsychologist Didier Grandjean of the University of Geneva, in collaboration with the Parini Hospital and researchers from the nearby University of Valle d’Aosta, both in northwest Italy.

It built on previous research that indicated that the the presence of a mother or father can — by means of vocal modulations — help to sooth young infants.

(In hospitals, there are other approaches used to sooth premature babies — including swaddling, sugar solutions or non-nutritive sucking with a dummy.)

In their study, the researchers recruited 20 premature babies born in the Parini Hospital and asked their mothers to be present on some occasions when their child had blood test — a procedure in which a few drops are taken via the heel.

‘We focused this study on the maternal voice,’ said paper author and developmental psychologist Manuela Filippa, also of the University of Geneva.

‘In the first days of life it is more difficult for the father to be present, due to working conditions that do not always allow days off,’ she explained.

‘For the study, the mother started talking or singing five minutes before the injection, during the injection and after the procedure,’ Dr Filippa added.

‘We also measured the intensity of the voice, so that it would cover surrounding noise, as intensive care is often noisy due to ventilations and other medical devices.’

Using the ‘Preterm Infant Pain Profile’ (PIPP) — which rates pain on a scale from 0 to 21 based on expressions and measurements like heartrate and oxygenation levels — the team looked to see if the mother’s presence soothed the babies.

‘In order to code the behaviour of premature babies, we filmed each blood test and judged the videos “blind”, by trained personnel, without sound, so as not to know whether the mother was present or not’, Professor Grandjean explained.

The team found that the average PIPP dropped from 4.5 to 3 when mothers were present and talking to their child.

‘When the mother sings, the PIPP is 3.8,’ Professor Grandjean noted.

‘This difference with the spoken voice can be explained by the fact that the mother adapts her vocal intonations less to what she perceives in her baby when she sings, because she is in a way constrained by the the melodic structure.’

Alongside using PIPP, the team also explored other ways in which the babies responded to their mothers’ voices.

‘We quickly turned to oxytocin, the so-called attachment hormone, which previous studies have already linked to stress, separation from attachment figures and pain,’ Dr Filippa explained.

By collecting saliva samples, the team found that the babies’ oxytocin levels rose from an average 0.8 to 1.4 picograms per millilitre when the mothers spoke

‘In terms of oxytocin, this is a significant increase,’ Dr Filippa noted. 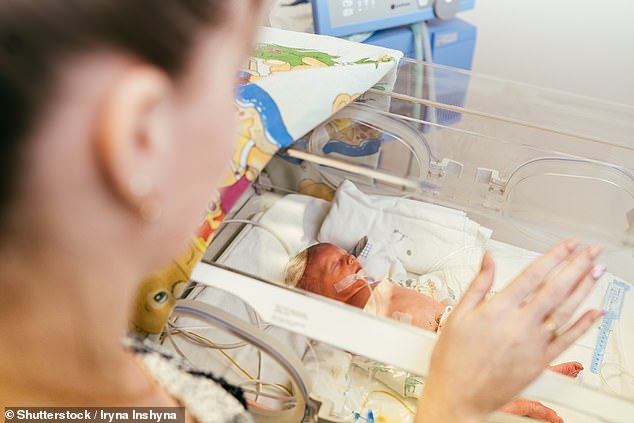 The findings, the team said, highlight the importance of parents being present while their baby is in intensive care and undergoing an important stage of development

‘We demonstrate here the importance of bringing parents and child together, especially in the delicate context of intensive care,’ Dr Filippa said.

‘Parents play a protective role here and can act and feel involved in helping their child to be as well as possible,’ added Professor Grandjean.

This, he added, ‘strengthens the essential attachment bonds that are taken for granted in a full-term birth.’

EXPLAINED: PREMATURE BIRTH AND ITS RISKS TO BABIES