HEALTH: Should I cut out bread?

HEALTH: Should I cut out bread?

Q For a few years I’ve suffered with bloating, colicky abdominal pains and occasional diarrhoea. I also get a dull headache and feel as though I have no energy. My GP did some blood tests for anaemia and coeliac disease, which came back normal, so my GP said it’s probably irritable bowel syndrome. I tried a gluten-free diet anyway and felt much better. The brain fog and irritability lifted, too. But when I ate a slice of bread the symptoms returned, only settling after a few days back on a gluten-free diet. Could I have coeliac disease after all?

A If you have coeliac disease (CD) and eat food containing gluten, such as wheat, barley or rye, then the gluten causes an inflammatory reaction, damaging the lining of your gut in the process. It affects an estimated one per cent of the population.

Although gluten is mainly found in bread and cakes, according to functional nutritional therapist Tanya Borowski, it is also increasingly used in processed foods

Symptoms include nausea, bloating and colicky abdominal pain, as well as diarrhoea and/or constipation or unexpected weight loss in severe cases. It may also cause symptoms elsewhere in the body such as fatigue, joint pains or skin problems. And it can lead to headaches, ‘brain fog’, depression, unexplained neurological symptoms and malaise.

However, there is also a broader group – those with non-coeliac gluten sensitivity (NCGS) – with milder symptoms, who respond badly to gluten but blood tests and the gut remain normal. Both CD and NCGS are increasing. Although gluten is mainly found in bread and cakes, according to functional nutritional therapist Tanya Borowski it is also increasingly used in processed foods. She points out that gluten is a complex protein, which is often only partially broken down in the gut during digestion, causing inflammation and a leaky gut. This allows partially digested food, inflammatory substances and microbes to pass into the blood. The overstimulated immune system then reacts to these, causing inflammation elsewhere.

The definitive test for CD is an intestinal biopsy via an endoscope, which will show significant gut-lining damage. I would strongly encourage you to discuss with your GP a gastroenterology referral, to consider this option. If it’s positive you will also need to be tested for osteoporosis, monitored for iron, vitamin B12 or folate deficiencies as well as (although rare) for intestinal cancer. A study by Columbia University Medical Center has shown that wheat exposure in the NCGS group is triggering a systemic immune reaction and intestinal damage.

However, because there is no blood test, the best way to tell if you have NCGS is by removing wheat/gluten completely from your diet and seeing if your symptoms improve. You should keep a detailed diary.

● these disappear within a few days on a gluten-free diet;

● a blind test (where the participant doesn’t know if they’ve been given gluten) produces the symptoms;

● CD and wheat allergy have been ruled out.

The dentists’ trick for healthy teeth

A dentist recently told me about the beneficial effects of something she called ‘oil pulling’. Anything to do with teeth and pulling doesn’t sound appealing, but this simply involves swishing a tablespoon of coconut oil around your mouth and ‘pulling it’ between your teeth for about 15 minutes a day, like a mouthwash. 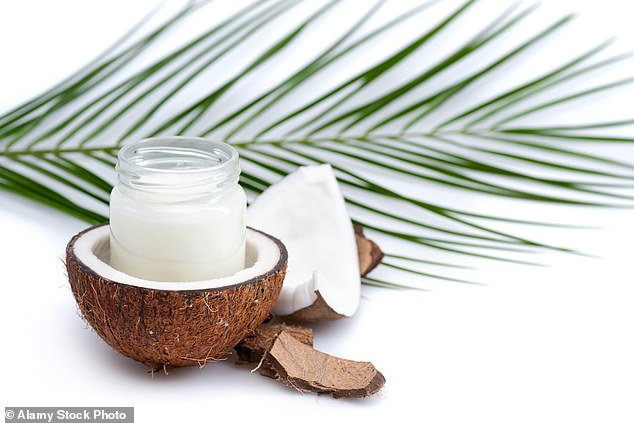 A dentist recently told me about the beneficial effects of something she called ‘oil pulling’. It simply involves swishing a tablespoon of coconut oil around your mouth and ‘pulling it’ between your teeth for about 15 minutes a day, like a mouthwash

A study of 60 volunteers with inflamed gums (gingivitis) were asked to do it for a month, after which there was a significant reduction in plaque and gingivitis. Some people report less bad breath. The reason? Coconut oil has anti-inflammatory and antimicrobial properties so may reduce the growth of bacteria, which cause gum disease.

I’ve been trying it and my teeth definitely feel smooth and clean – although this isn’t an alternative to brushing. Do dispose of it afterwards in a bin as the oil may block drains.