By Sarah Stacey for The Mail on Sunday

One of the most inspiring stories I’ve reported on for this page was about the effect of music on the brain. I visited a Singing for the Brain group where people with dementia are lured out of an often silent world by the power of song. I can still see the 1,000-watt smile lighting the face of one woman when her husband who had Alzheimer’s pulled her up to dance.

‘Usually this awful disease leaves him moody because he can’t communicate or do much,’ she told me. ‘But these sessions spark happiness that triggers his memory. He was trying to tell me the music reminded him how we used to jive in the old days.’

There have been many similar stories and last year the Utley Foundation (utleyfoundation.org.uk), which champions music therapy for people with dementia, commissioned a report (the Commission on Music and Dementia) collating all the evidence. The Foundation is campaigning to ensure that everyone living with dementia has access to music treatment and therapies by 2020 and is now looking for an ambassador to head the task force.

Music is proven to calm people with dementia, as well as reduce anxiety

‘Music can bring a person back to life,’ says businessman and trustee Neil Utley. ‘The ability to connect to music is an innate aspect of being human; a diagnosis of dementia need not undermine this.’ In 2014, the Utley Foundation sponsored a research tour by singer-songwriter Beatie Wolfe, whose grandmother had dementia, to play her own music to residents in Priory Group care homes across the UK.

The Power of Music & Dementia study ran for four months, with residents’ responses monitored during Beatie’s live performances and when they listened to the same songs on headsets. Staff noted that 72 per cent responded in meaningful ways such as singing, clapping or tapping, as well as significant improvements in memory and communication. ‘We had people who were virtually catatonic dancing, and some who hadn’t spoken in almost a year singing along to songs they’d never heard,’ Beatie said. (Watch clips on beatiewolfe.com/pom.)

Fascinatingly, Alzheimer’s and other dementias seem to spare areas of the brain associated with musical memory. Even in advanced cases, many with dementia are able to sing and enjoy music, which may also help memory.

My father developed dementia and, like 80 per cent of people with dementia living in care homes, was prone to agitation and aggression. Music has been proven to calm those with dementia, as well as reducing anxiety, which improves wellbeing for the sufferer and helps caregivers.

While there are community-based music groups, sadly only a small minority of care homes provide high-quality music and arts for residents, hence the Utley Foundation’s campaign. The good news is that caregivers can start the ball rolling by creating a personalised playlist. Evidence suggests that older people retain the clearest memories of music they enjoyed in their teens and 20s.

The charity Playlist for Life (playlistforlife.org.uk) is dedicated to helping families, communities and care professionals design personal music for people with dementia via a free app. Mindsong (mindsong.org.uk) is another charity that trains care staff to run their own singing groups.

For more information about Singing for the Brain, go to alzheimers.org.uk

SPICE UP YOUR BRAIN POWER

With exam season upon us, students might benefit from trying Pukka Herbs organic 7 Day Brainwave Kit (£10, victoriahealth.com), which features turmeric, the superhero golden spice that is so renowned in India it has its own festival. The kit contains seven sachets of Turmeric Gold tea, wellbeing tips and recipes, plus the Brainwave food supplement, which also contains brahmi and gotu kola to help improve learning ability and concentration. I’m also a huge fan of turmeric for aches and pains.

The Pukka Herbs organic 7 Day Brainwave Kit features turmeric, the superhero golden spice that is so renowned in India it has its own festival 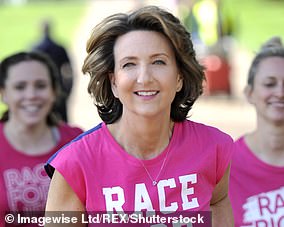 Cancer Research UK is holding its 25th Race for Life this summer, in partnership with Tesco. (Broadcaster Victoria Derbyshire is pictured at last year’s race.) There are more than 400 events across the UK from now until October, including 10k routes, a half marathon, Pretty Muddy 5k and 10k obstacle courses, plus Pretty Muddy Kids. Enter via the website or call 0300 123 0770 for more information.