Health: The next coronavirus could come from RATS, study warns

The next coronavirus could come from RATS: Rodents may be asymptomatic carriers of SARS-like viruses, study warns

Rodents may be asymptomatic carries of SARS-like viruses, a study has warned — meaning the the ‘next COVID-19’ may well come from rats.

Researchers from Princeton University performed a genomic analysis of various mammal species, looking specifically at the receptors that SARS viruses bind to.

They found evidence that some rodent species in the past were repeatedly exposed to SARS-like coronaviruses, leading them to likely evolve a certain level of resistance.

SARS-CoV-2 — the virus that causes COVID-19 infection — is ‘zoonotic’, meaning that it jumped from a non-human animal into humans.

And previous research has shown that Chinese horseshoe bats can play host to numerous SARS-like without themselves showing extreme symptoms.

Identifying animals that may have similar protections against such infections — and could thus serve as viral reservoirs — is vital for preventing future pandemics.

Rodents may be asymptomatic carries of SARS-like viruses, a study has warned — meaning the the ‘next COVID-19’ may well come from rats, like the one pictured (stock image)

‘Our study suggests that ancestral rodents may have had repeated infections with SARS-like coronaviruses,’ the duo wrote in their paper.

This, they added, likely have allowed them to acquire ‘some form of tolerance or resistance to SARS-like coronaviruses as a result of these infections.

‘This raises the tantalizing possibility that some modern rodent species may be asymptomatic carriers of SARS-like coronaviruses — including those that may not have been discovered yet.‘

In their investigation, Dr King and Professor Singh studied the so-called ACE2 receptors that SARS viruses use to gain entry into mammalian cells — characterising the evolution of the receptors across different mammal species.

The team found that primates and other mammals not already known to be SARS hosts tended to have little evidence of past adaptation in the ACE2 receptors, which is what today leaves us vulnerable to symptomatic cases of the disease.

Among rodents, however, the duo’s genomic analysis exposed a pattern of rapid evolution in the ACE2 binding interface — evidence by a greater diversity in the amino acid sequences that code for the receptor.

This suggests that some rodent species were likely exposed to SARS-like coronaviruses repeatedly over the course their evolution and, as a consequence, that they may have acquired a form of tolerance to these types of infections. 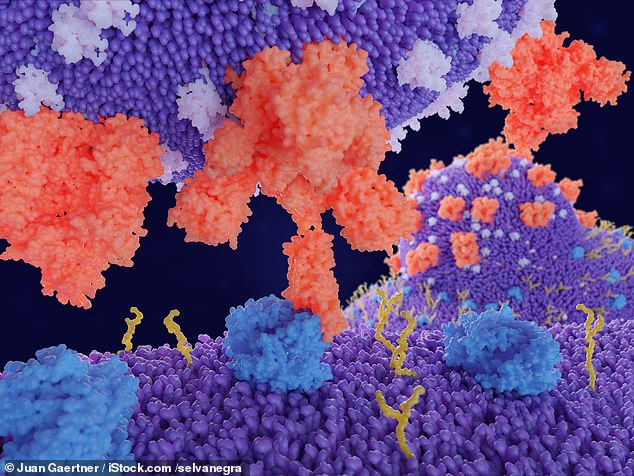 In their investigation, Dr King and Professor Singh studied the so-called ACE2 receptors that SARS viruses uses to gain entry into mammalian cells — characterising the evolution of the receptors across different mammal species. Pictured: a SARS-CoV-2 spike protein (red) latched on to an ACE2 receptor (blue), letting it penetrate the cell (as seen in the background)

‘Continuing to explore adaptations in coronavirus animal hosts will be important […] for understanding which animals have possibly adapted tolerance mechanisms through ancient exposures and may be carriers of SARS-like viruses,’ the duo began.

Such studies, they continued, will also aid us in ‘finding those that are vulnerable symptomatic hosts, as humans have unfortunately proven to be.’

The full findings of the study were published in the journal PLOS Computational Biology.