A health warning has been issued in Colorado after a squirrel tested positive this weekend for the bubonic plague in what is being described as ‘an increase of reported plague activity.’

The sick squirrel was found in the city of Morrison, southwest of Denver, although it is the first case of the plague to have been recorded in Jefferson County.

Jefferson County Public Health said that it was the first case of the plague ever recorded in the county.

‘Plague is an infectious disease caused by the bacteria Yersinia pestis, and can be contracted by humans and household animals if proper precautions are not taken,’ Jefferson County Public Health said.

The health officials reassure that so long as proper precautions are taken, the risk of getting plague is ‘extremely low.’

The Colorado Department of Public Health and Environment is reporting there has been an increased amount of plague activity in the state having already been found in Broomfield, northwest of Denver.

Humans are able to be infected with plague by getting flea bites or even being coughed upon from an infected animal.

The bubonic plague is a bacterial disease spread by fleas living on wild rodents. It kills in less than 24 hours if not treated promptly.

Cats in particular are susceptible to the plague and may die if not treated promptly with antibiotics. 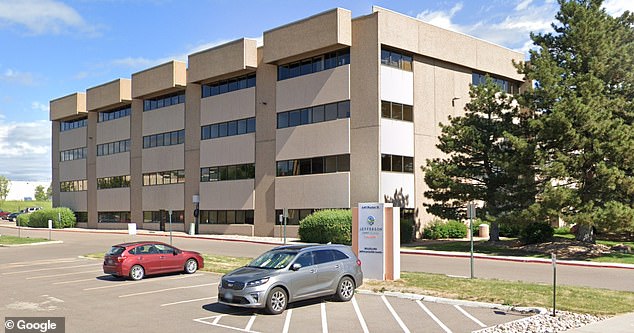 Jefferson County Public Health, whose building is pictured above, said that it was the first case of the plague recorded in the county

Cats similarly can also contract the plague from flea bites, or that of rodents.

Dogs are less susceptible to contracting the plague but they are able to pick up fleas which could be carrying the disease.

Symptoms of plague are known to include a fever, chills, headache, nausea and extreme pain and swelling of lymph nodes, occurring within two to seven days after being exposed.

However, plague can be treated effectively with antibiotics if diagnosed early.

Plague is an infectious disease caused by the bacterium Yersinia pestis, which is carried by fleas and transmitted between animals. The picture above is a 3D illustration of the bacterium

Bubonic plague is the most common form of plague and is spread by the bite from an infected flea. The infection spreads to immune glands called lymph nodes, causing them to become swollen and painful and may progress to open sores. Human-to-human transmission of bubonic plague is rare and it’s usually caught from animals.

Last week, the World Health Organization (WHO) said it was ‘carefully’ monitoring a case of bubonic plague in China after being notified by the authorities in Beijing.

A WHO official claimed the situation was being ‘well managed’ by China and not considered to represent a high risk.

Bubonic plague is one of the most devastating diseases in history, having killed around 100 million people in the 14th century.

Two other cases were confirmed in Khovd province in neighbouring Mongolia at the end of June involving brothers who had eaten marmot meat, China’s state news agency Xinhua said.

‘Bubonic plague has been with us and is always with us, for centuries,’ WHO spokeswoman Margaret Harris told reporters at a virtual briefing.

‘We are looking at the case numbers in China. It’s being well managed.

‘At the moment, we are not considering it high-risk but we’re watching it, monitoring it carefully.’ 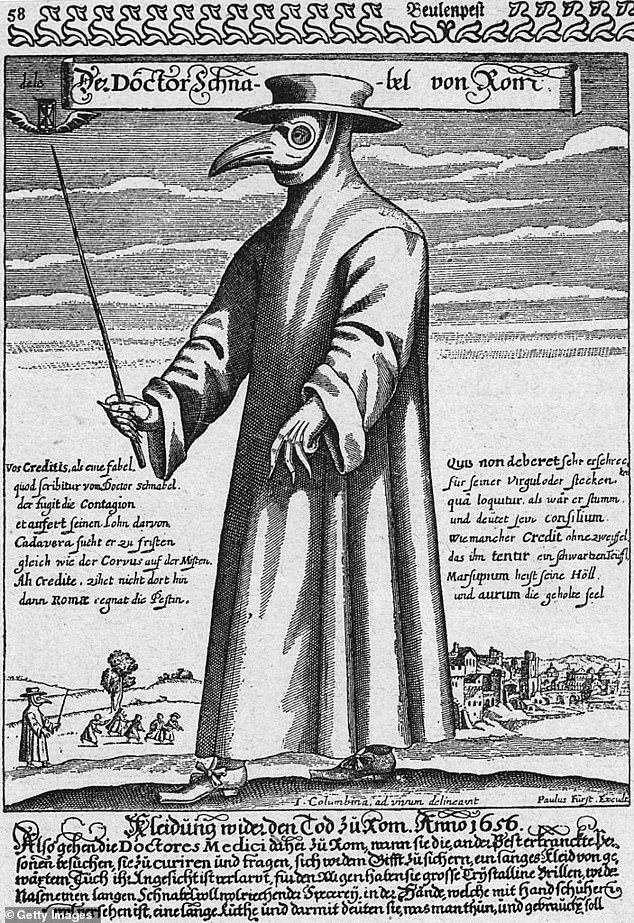 An illustration from 1656: A plague doctor in protective clothing. The beak mask held spices thought to purify air, the wand was used to avoid touching patients

BUBONIC PLAGUE: WIPED OUT A THIRD OF EUROPE IN THE 14TH CENTURY

Bubonic plague is one of the most devastating diseases in history, having killed around 100million people during the ‘Black Death’ in the 14th century.

Drawings and paintings from the outbreak, which wiped out about a third of the European population, depict town criers saying ‘bring out your dead’ while dragging trailers piled with infected corpses.

It is caused by a bacterium known as Yersinia pestis, which uses the flea as a host and is usually transmitted to humans via rats.

Drawings and paintings from the outbreak, which wiped out about a third of the European population, depict town criers saying ‘bring out your dead’ while dragging trailers piled with infected corpses

The disease causes grotesque symptoms such as gangrene and the appearance of large swellings on the groin, armpits or neck, known as ‘buboes’.

It kills up to two thirds of sufferers within just four days if it is not treated, although if antibiotics are administered within 24 hours of infection patients are highly likely to survive.

After the Black Death arrived in 1347 plague became a common phenomenon in Europe, with outbreaks recurring regularly until the 18th century.

Bubonic plague has almost completely vanished from the rich world, with 90 per cent of all cases now found in Africa.

However, there have been a few non-fatal cases in the U.S. in recent years, while in August 2013 a 15-year-old boy died in Kyrgyzstan after eating a groundhog infected with the disease.

Three months later, an outbreak in a Madagascan killed at least 20 people in a week.

A year before 60 people died as a result of the infection, more than in any other country in the world.

Outbreaks in China have been rare in recent years, and most have happened in remote rural areas of the west.

China’s state broadcaster said there were 12 diagnosed cases and three deaths in the province of Qinghai in 2009, and one in Sichuan in 2012.

In the United States between five and 15 people die every year as a result, mostly in western states.