Isaac Marshall (pictured) died in his sleep on Boxing Day

A heartbroken mother found her four-month-old boy lifeless in his cot on Boxing Day after the baby died in his sleep.

Georgina Marshall discovered her son, Isaac, was not breathing the day after his first Christmas.

The 20-year-old said her baby was born five weeks prematurely in September but was a ‘healthy, happy baby who was always smiling’.

The mother, from St Ann’s, Nottinghamshire, said: ‘I walked in to give him a feed on Boxing Day morning and saw he wasn’t breathing.

‘I started giving him compressions and my mum came in to help.

‘I was screaming and panicking. I want to raise awareness of how sudden it can be. Make sure you enjoy the time you have got with your son or daughter. 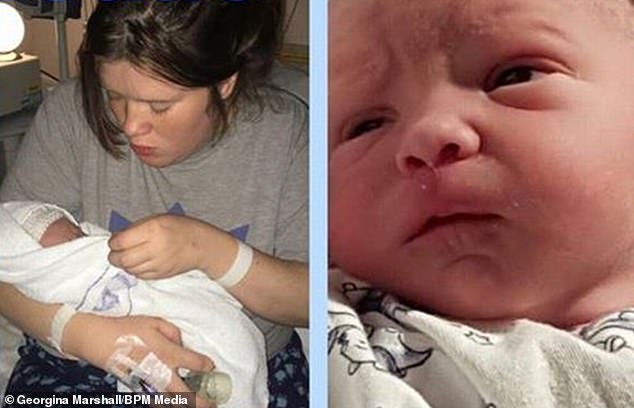 ‘He was a smiling and happy baby. He brought joy to everyone’s life. He was premature but had gained full strength and health. He had a bit of a cold so they are doing an autopsy to work out how he died.’

Isaac’s father, Aidan Brown, was working at CEX when his father and grandfather came to tell him that his son had died. 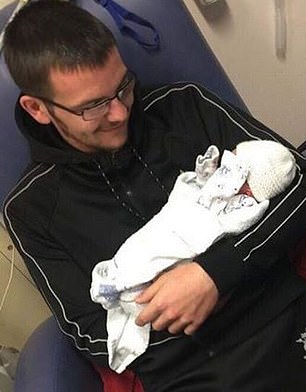 ‘There was no sign that he was really ill,’ the 20-year-old said.

‘It just happened out of the blue. We want to raise awareness of it.

‘It’s not something people talk about until it actually happens. Isaac was always smiling and always happy and playful.

‘I have really dark moments where I just break down. I’m trying to keep positive.’

Ms Marshall is fundraising to give Isaac the ‘happy send-off he deserves’.

She is currently on benefits and is unable to afford all the costs for the funeral.

‘I don’t believe children should travel in a black hearse for the funeral,’ she said.

‘I want him to go in a white car and for the funeral to remember him and his life.’

You can donate to Georgina’s fundraiser, ‘An Angel’s Send Off’ here.