Heart-wrenching pictures show a seal with a frisbee wrapped around its neck and another tangled in netting on the UK coast.

Volunteers rescued a seal nicknamed Mrs Pink Frisbee as the pink toy cut into her skin at Waxham Beach, Norfolk, on Wednesday before saving a seal at Horsey Beach on Friday.

It was seen writhing in pain on Friday as it struggled against the netting. Both of the animals are now recovering thanks to conservationists.

The seal trapped in netting – nickname Suffolk Punch – was moved from Horsey Gap beach to East Winch RSPCA in Norfolk on Friday, where he will be soaked in a salt bath, medicated and fed for several months.

Supervisor Jo Mead said: ‘We have taken the netting off, he was very angry – but all being well the wound will be cleaned up so we’ll let him settle in and start feeding him fish.’ 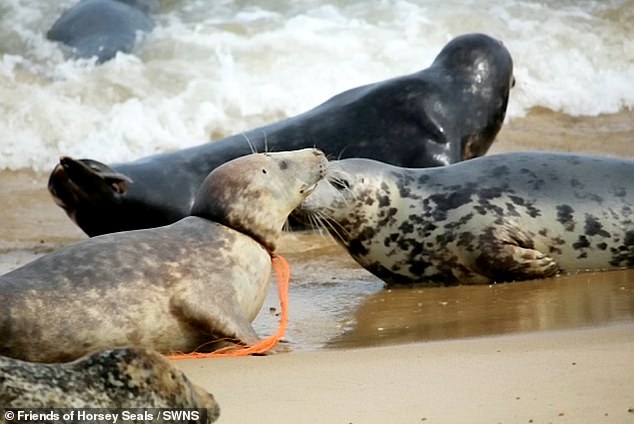 The seal – which has been dubbed the Suffolk Punch – was seen struggling against the netting, which is here pictured tangled around his neck 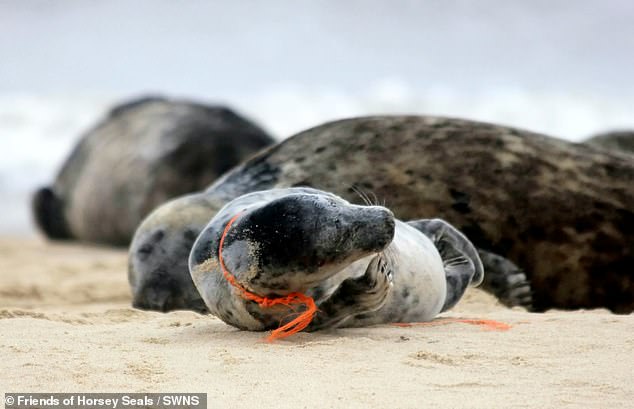 But she adds, it is still ‘touch and go’ as their main priority is getting his health back to normal.

Dan Goldsmith, chairman of the Marine and Wildlife Rescue, said he has seen an ‘increase’ of seals rescued from entanglement. He says his teams are having to rescue seals at least ‘once a month’.

‘It is so sad – although I suspect there are more seals out there, and there has always been an issue with rubbish,’ he said.

Friends of Horsey Seals Chairman Peter Ansell said: ‘This is not the first time we have tried to catch him. If you had seen the state of his neck you would have seen that the netting had been stuck in his neck for months and months.

‘I would say the netting had wedged into his skin about an inch and half deep. I could see the vert digging her fingers into the wound to try and get underneath the netting so she could cut the strings wrapped around his neck.

‘It wasn’t a simple job and he wasn’t very happy. I reckon it will take months and months for him to repair – I would say probably three months.’ 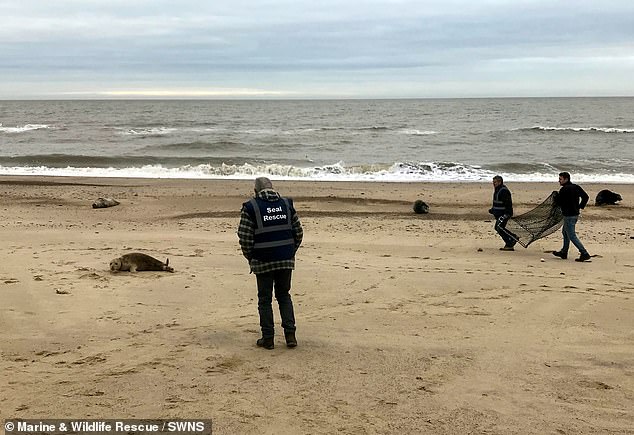 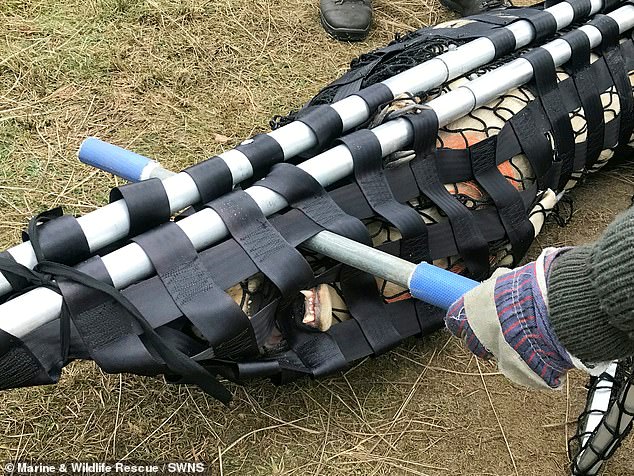 Last year, Horsey volunteers also rescued a seal with frisbee stuck around its neck. The mammal called Frisbee is thought to have swam with the yellow plastic ring cutting into her neck for up to six months.

She was rescued starving to death and has undergone five months of rehabilitation at an RSPCA centre.

Volunteers at Friends of Horsey Seals made several desperate attempts to rescue her after spotting the plastic ring embedded on her neck off Horsey Beach, Norfolk.

Frisbee was nursed back to health with antibiotics, painkillers and steroids for the very deep and infected wound. She went through four 25kg bags of salts a day as part of her rehabilitation.