Police hunt driver of £92,000 Audi RS6 who filmed himself hitting 201MPH on motorway during lockdown

Police are hunting a reckless driver who filmed himself driving at more than 200mph along a motorway.

Sussex Police told MailOnline they are trying to identify the man who was driving a £92,000 Audi RS6 at speeds of up to 201mph.

The man uses a mobile phone to film himself as he accelerates to almost three times the speed limit.

The video was shot on what is believed to be the M23 near Pease Pottage, West Sussex.

As the clip begins, the Audi is seen coming off a slip road accelerating on to the motorway.

The driver films the speedometer as the dial dramatically rises, within five seconds the Audi travels from 61mph to 116mph.

The driver then begins to weave in and out of traffic, showing no regard for lane discipline as the engine roars in the background. 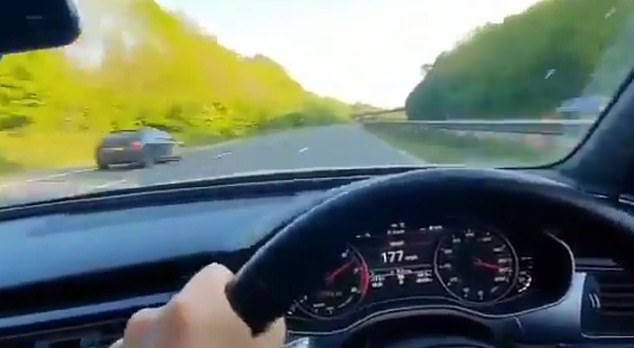 The whole time the driver rests just one hand on the wheel as they tear down the motorway while filming.

Eventually the driver reaches 200mph, they zoom in on the speedometer showing the speed topping at 201mph.

It is likely the car’s owner had the vehicle’s speed limiter removed and the engine remapped to increase its top speed.

A Sussex Police spokesperson said: ‘We have been made aware of this video and enquiries are ongoing to identify the driver.’