A mother filmed her baby appearing to say ‘I love you’, after repeatedly saying the heartwarming phrase to her.

Rupinder Kaur, 32, and Deepinder Singh, 32, who live in New Zealand, welcomed Gurnaz Kaur to their family three months ago.

While most children aren’t expected to speak until around the age of 12 months, Gurnaz seemingly repeats ‘I love you’ to her mother in the footage.

Rupinder Kaur, 32, and Deepinder Singh, 32, who live in New Zealand, have shared footage of their daughter Gurnaz Kaur (pictured) speaking at just 3-months-old

Rupinder who is also mother to Tajveer Kaur, four, revealed she had been repeating the phrase to encourage Gurnaz to speak.

She said: ‘Gurnaz is like normal healthy happy baby. Hard to explain personality, being so little, but like a normal child.

‘I was just trying to interact with her and she looked into my eyes and repeated what I said and I have been trying since then. She tries but can not say it.’

Rupinder revealed the phrase is Gurnaz’s first words, since she was born January 20, 2020, weighing just 2.7kg.

The mother-of-two has been trying to encourage Gurnaz to continue speaking and to repeat the phrase.

She continued: ‘I usually speak Punjabi but sometimes speak English as well while talking to her.

‘I saw some kids video online when parents said something and babies copied, so while changing her nappy I just tried a few times and she replied.’ 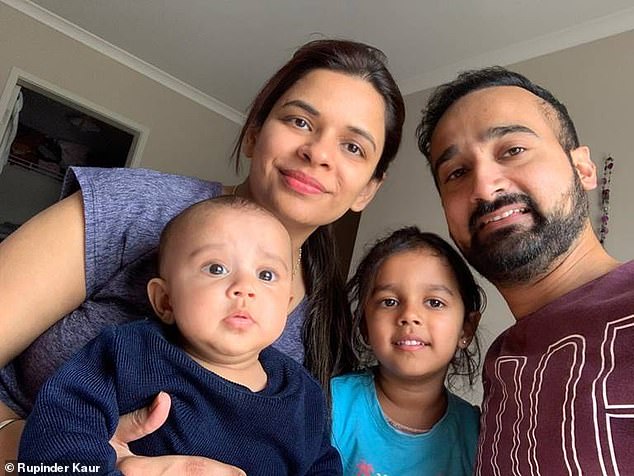 Rupinder uploaded a clip of Gurnaz saying ‘i love you’ to social media app TikTok. Pictured: Rupinder and Deepinder with their daughters Tajveer Kaur and Gurnaz

Rupinder has branded the occurrence a ‘miracle’, revealing that her friends and family were equally surprised by the footage.

She added: ‘We normally talk about what’s going on around her or, play peek-a-boo.

‘I believe it’s a miracle. Even I was surprised.’

They also claim pointing at items and reading picture books can be useful for encouraging the infant to engage.

According to records, Northern Ireland-based Toni McCann’s daughter Cillian, who said ‘hello’ at just seven-weeks-old is the youngest baby ever to speak.

In a clip with shocking similarities to Rupinder’s, Cillian is seen attempting to repeat the greeting after hearing her mother say it.

Sara Marshall from Newcastle, was also stunned when her son Tommy-Frank began speaking at nine-weeks-old.

She said Tommy was able to pronounce ‘hiya’ and ‘I love you’. 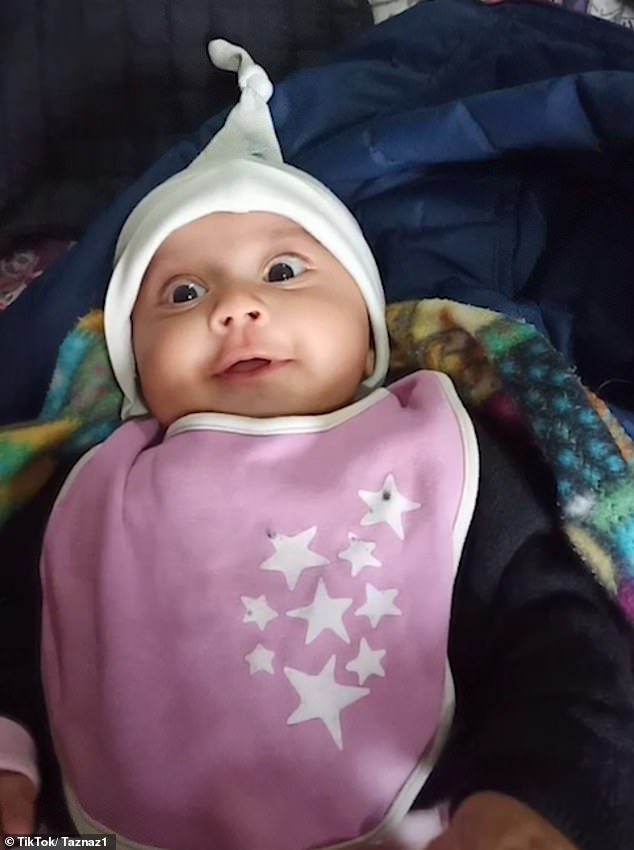 Rupinder revealed she’s continued to encourage Gurnaz (pictured) to speak, but she hasn’t been able to say ‘i love you’ again