Royal Navy sailors were hugged and kissed by loved ones as they returned to Britain for Christmas.

Service personnel on board the HMS Albion and HMS Diamond docked in Plymouth and Portsmouth to warm welcomes from family members and the public.

She received a tumultuous welcome from hundreds of family and friends who greeted her home after a ten-month deployment – just in time for Christmas.

Since she left Devonport in Plymouth, Devon, HMS Albion has steamed 33,004 nautical miles that has taken her through the Mediterranean to the Far East.

Emotional: A officer embraces his son after returning to Portsmouth from HMS Diamond after months away at sea 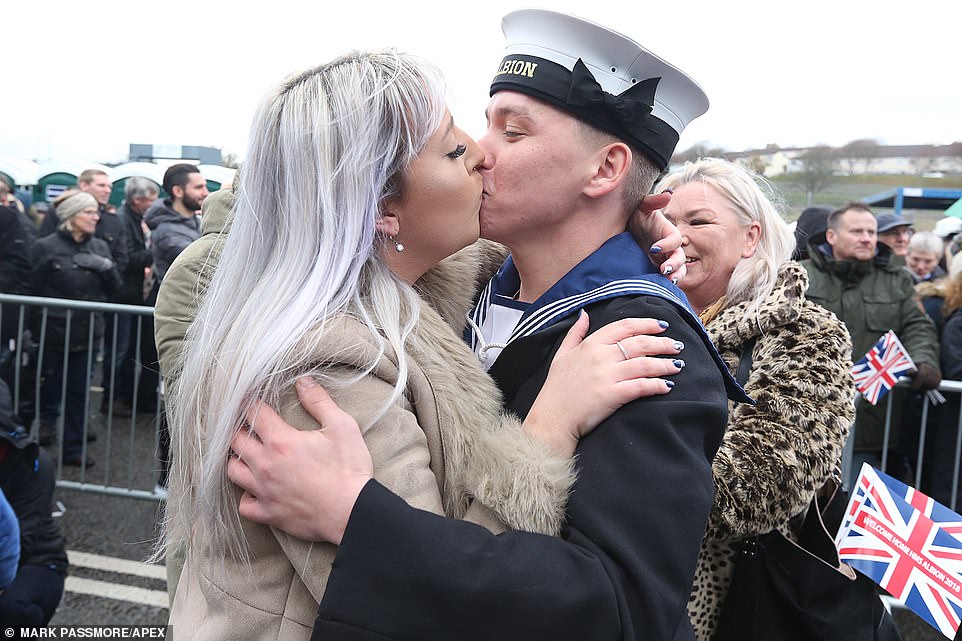 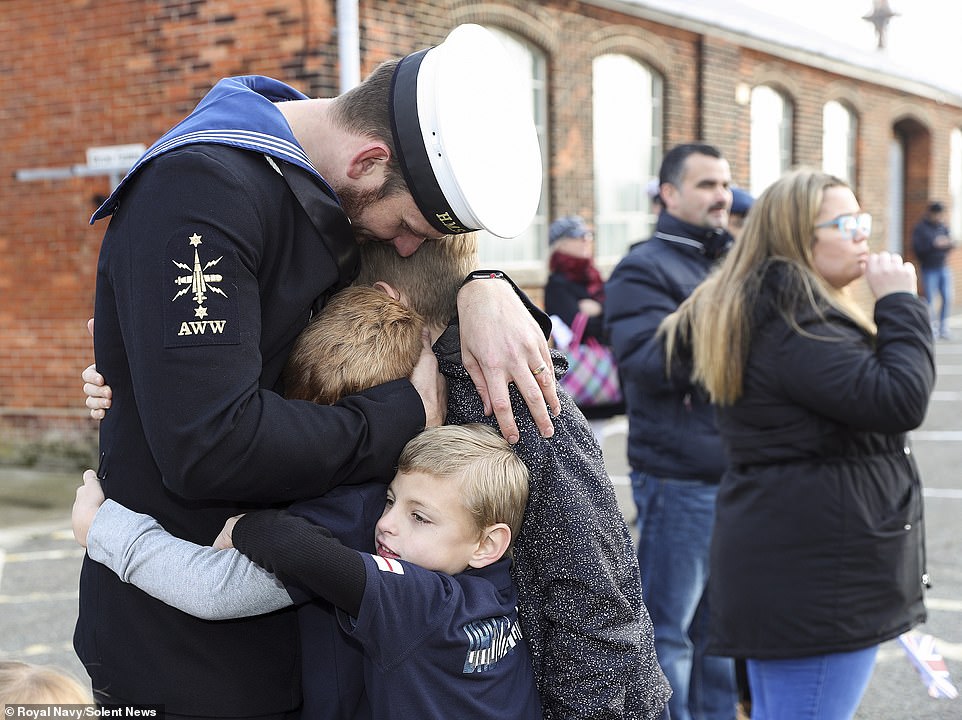 Welcome back daddy: A sailor embraces his three children in a heart-warming scene after returning to Portsmouth from HMS Diamond 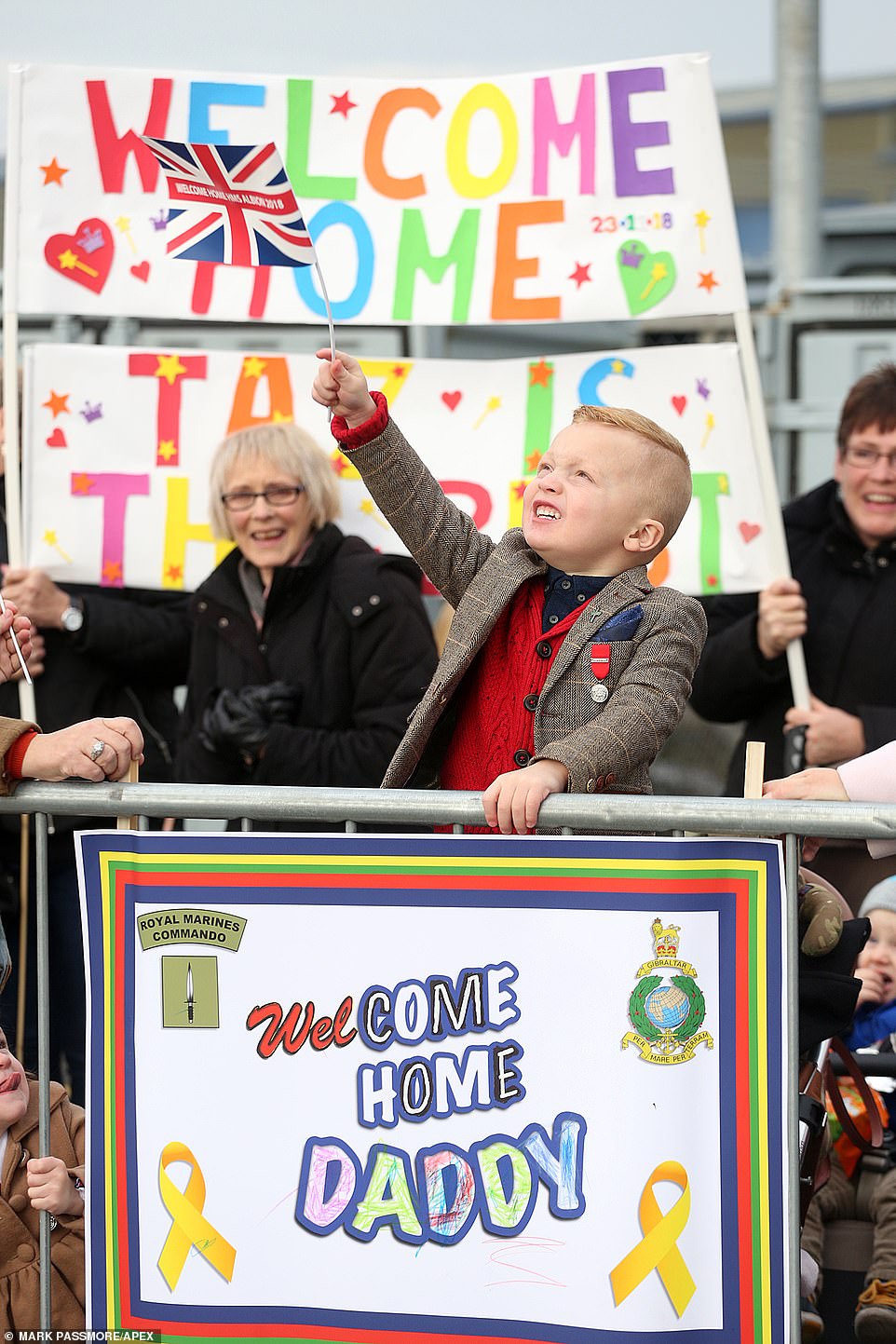 During that time the ship has sailed across the Indian Ocean, South China Sea, North Pacific Ocean, Atlantic, the Arabian Sea and the Mediterranean Sea visiting Vietnam, Singapore, Japan, South Korea and Borneo along the way.

Her homecoming came less than two months after the ship – along with HMS Bulwark – was spared the axe in the latest defence review amid fears she would be scrapped or sold off.

‘HMS Albion is the Swiss Army knife of UK defence – capable of humanitarian aid right through to whites of the eyes war fighting.

‘We couldn’t have asked for a better welcome back. We’ve had an absolutely fabulous ten months but now we can focus on home.’ 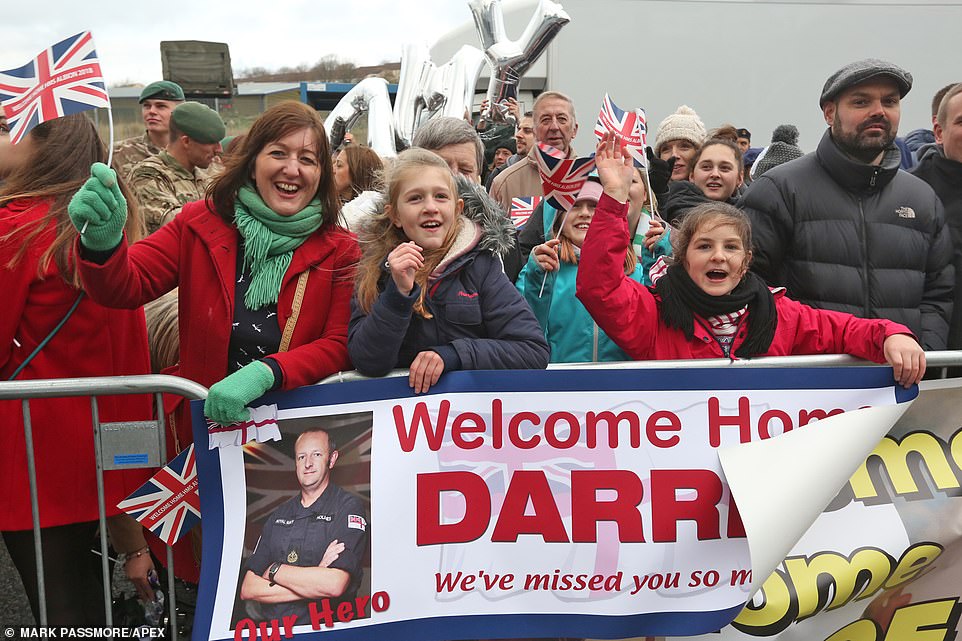 ‘We missed you’: Crowds gathered in Devonport, Plymouth, to welcome loved ones on board HMS Albion back to Britain 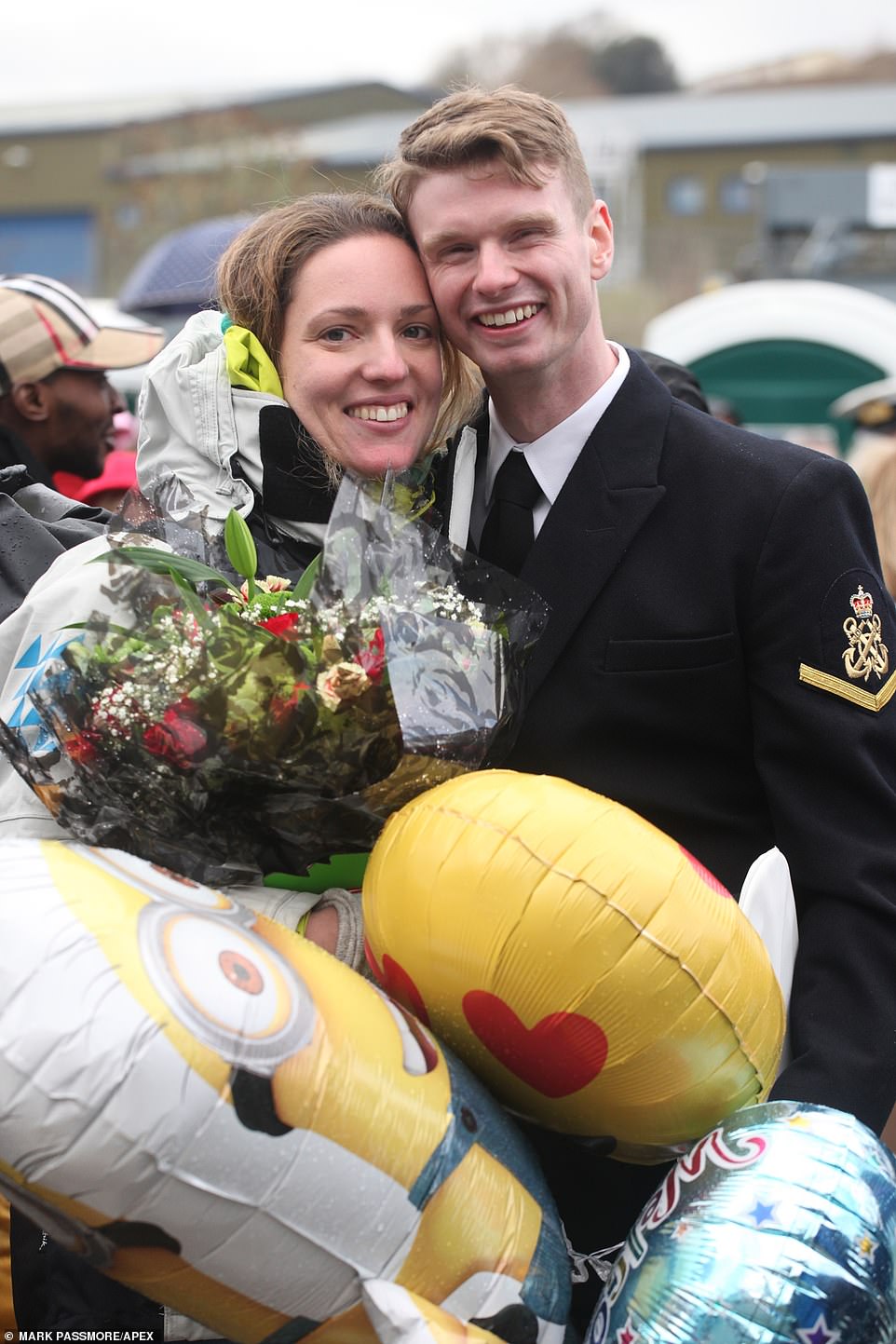 A couple embrace in Devonport, Plymouth, after months apart while the HMS Albion travelled 33,004 nautical miles through the Mediterranean to the Far East 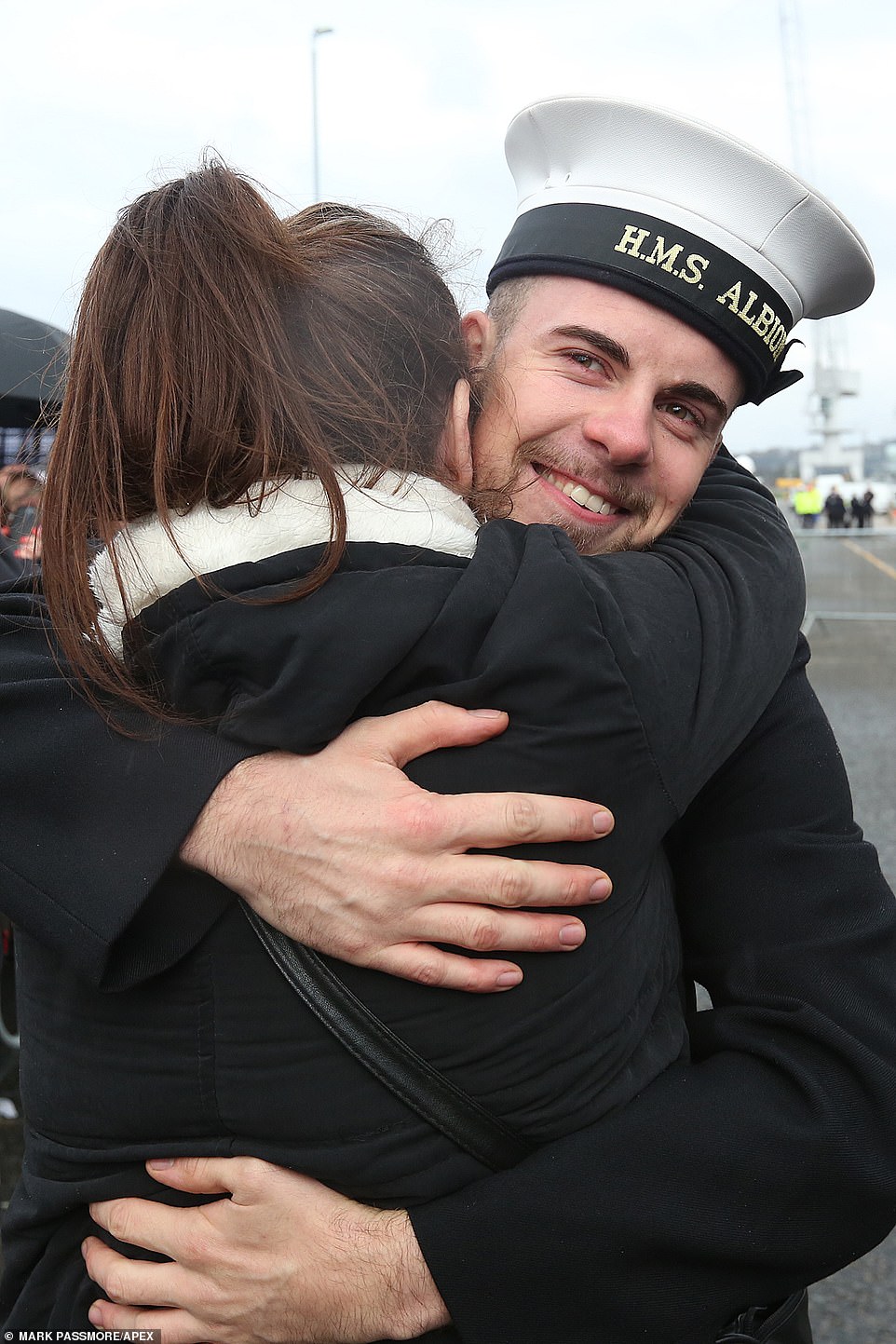 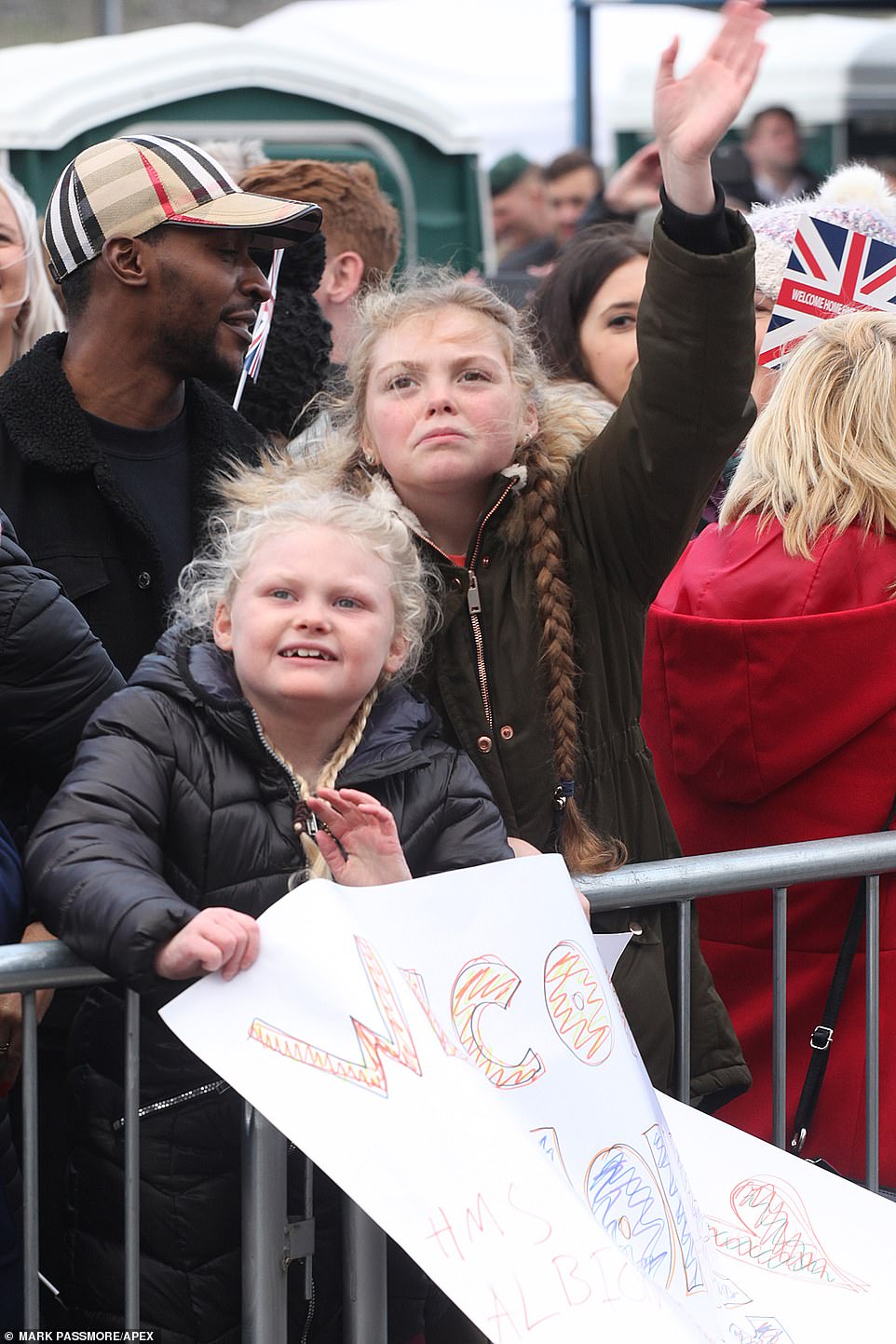 Sailing home for Christmas: Two children wait for a loved one to arrive of HMS Albion today along with hundreds who also gathered to give them a warm welcome 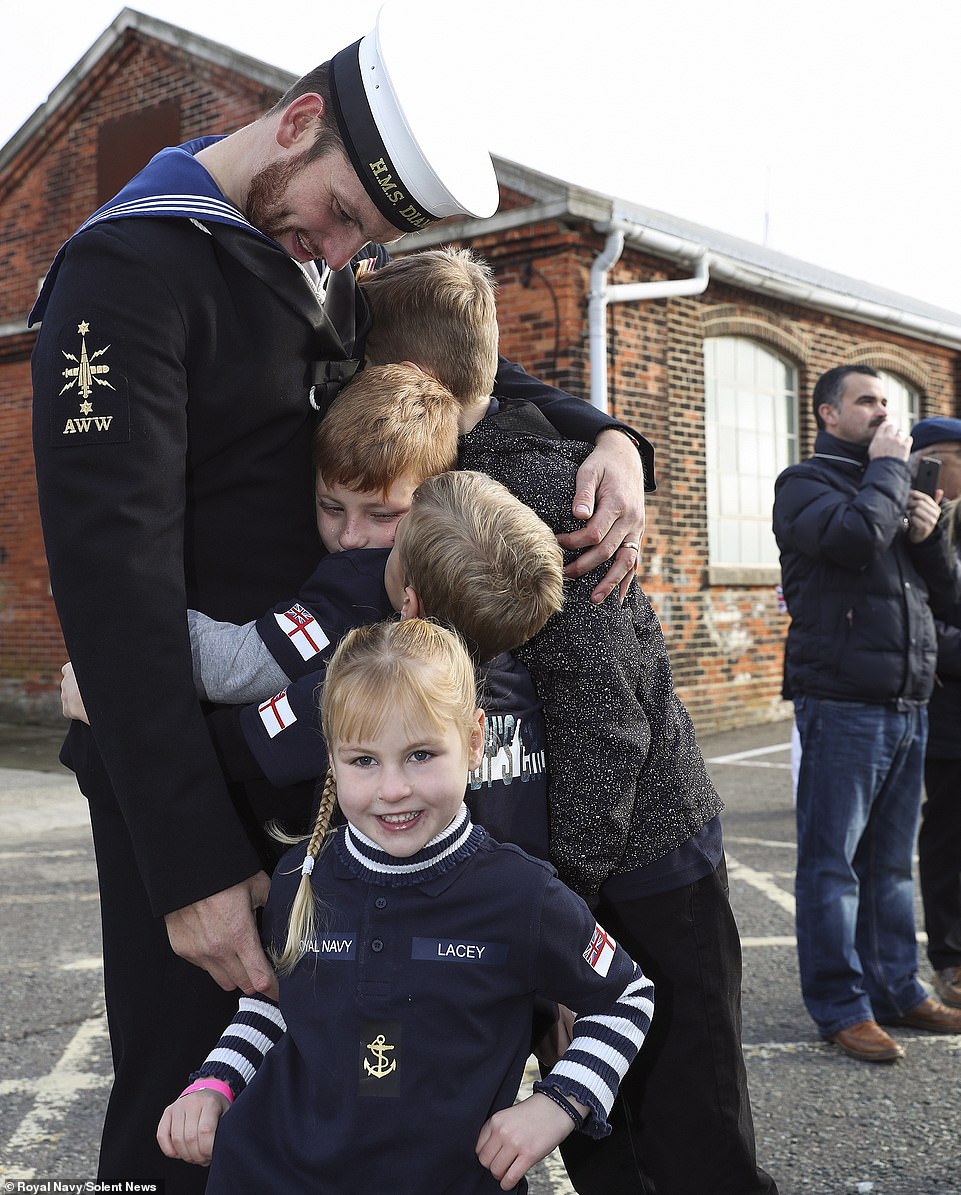 Royal Navy warship HMS Diamond also returned home to Portsmouth with a bang after two months operating in the Mediterranean.

The Type 45 destroyer fired a 17-gun salute as she sailed back into her home port earlier today.

Her deployment was part of the ongoing counter-ISIS NATO operations where she used her state-of-the-art technology to gather intelligence on the air battlespace, sharing this with the RAF and international allies in the region.

She is one of just several Royal Navy warships to operate in the Eastern Med last year.

As well as the counter-terrorism operations, HMS Diamond also held port visits to Crete, Cyprus, Malta and Gibraltar to reinforce the Royal Navy’s long-standing links with those countries.

Commanding Officer of HMS Diamond Commander Ben Keith said: ‘This has been a challenging, but extremely rewarding and successful deployment.

‘I’m proud of all that my ship’s company has achieved while we’ve been away and I’m incredibly grateful to Diamond’s extended family for all their support.’

HMS Diamond also proved her ability to integrate with the UK Air Component Commander (UKACC) by working with the RAF assets based in Cyprus. 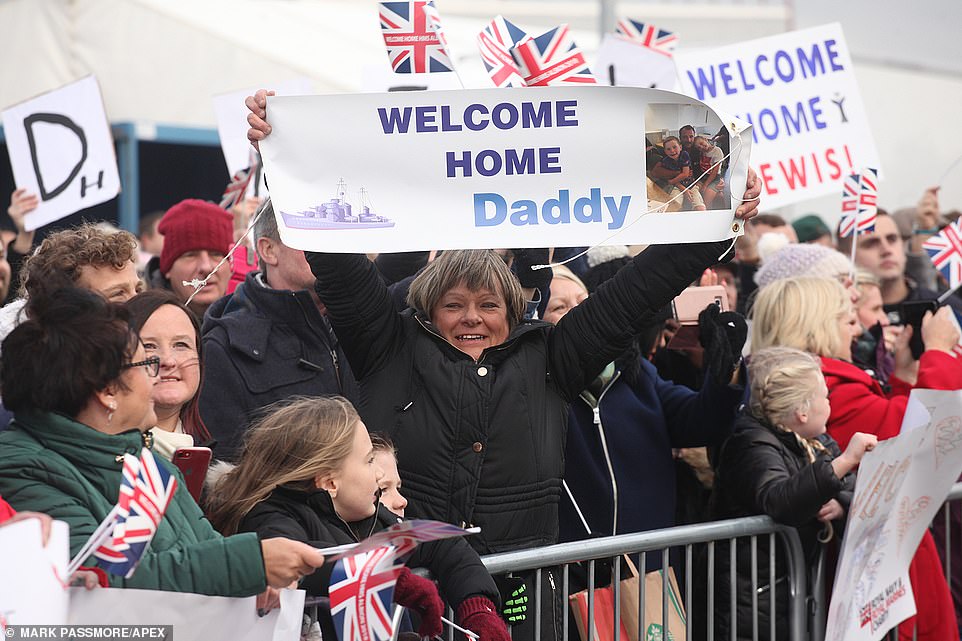 Some family members held up pictures of loved ones as waited them to arrive of their vessels, which had been away at sea for months 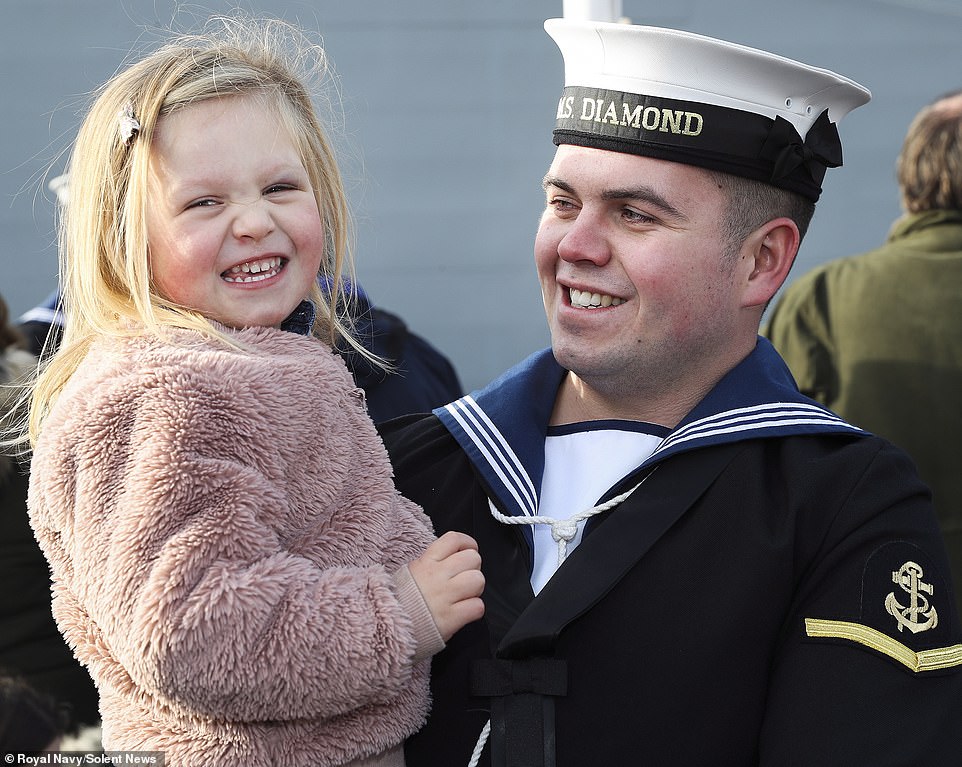 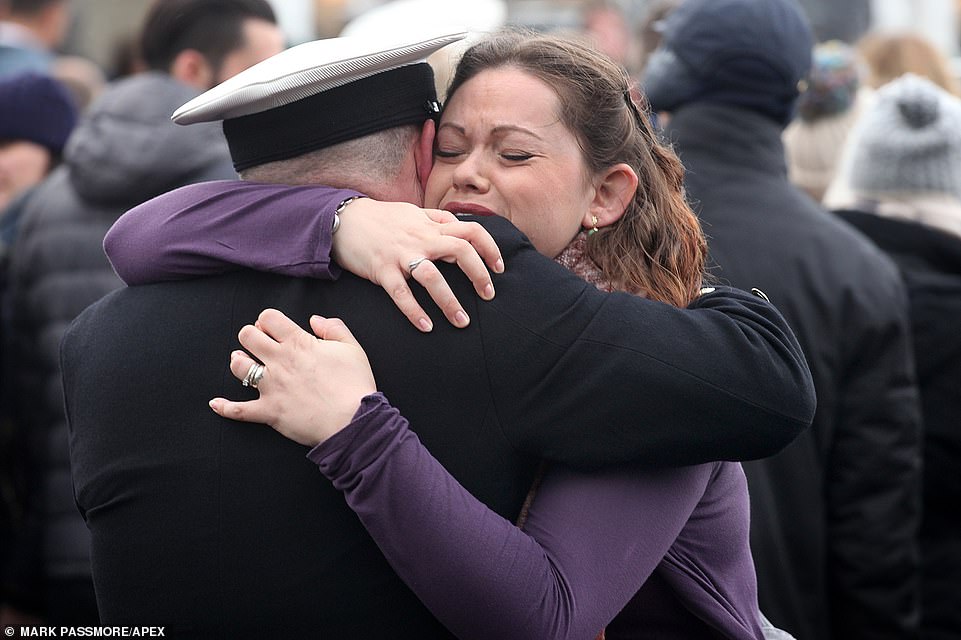 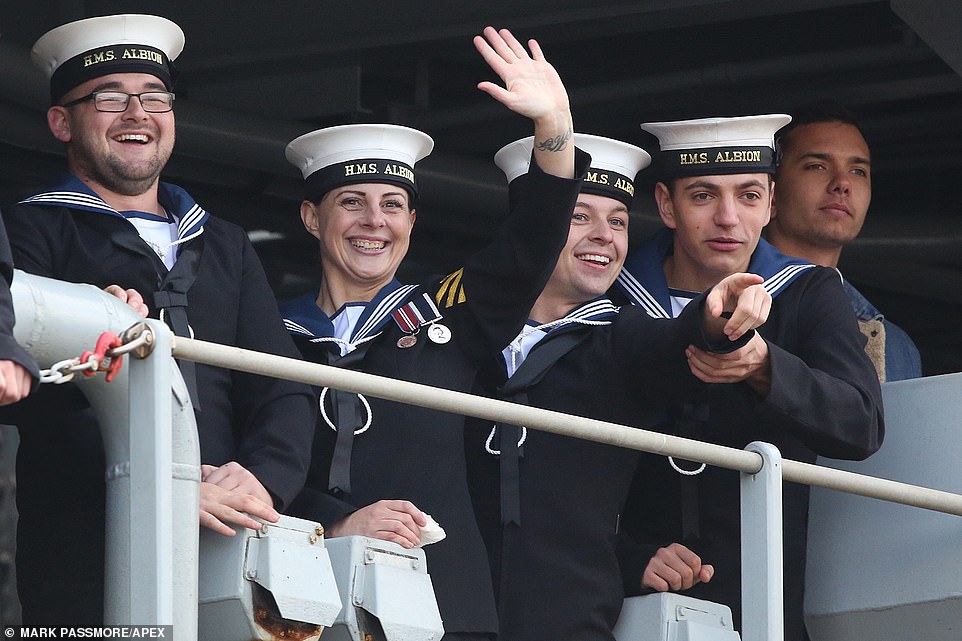 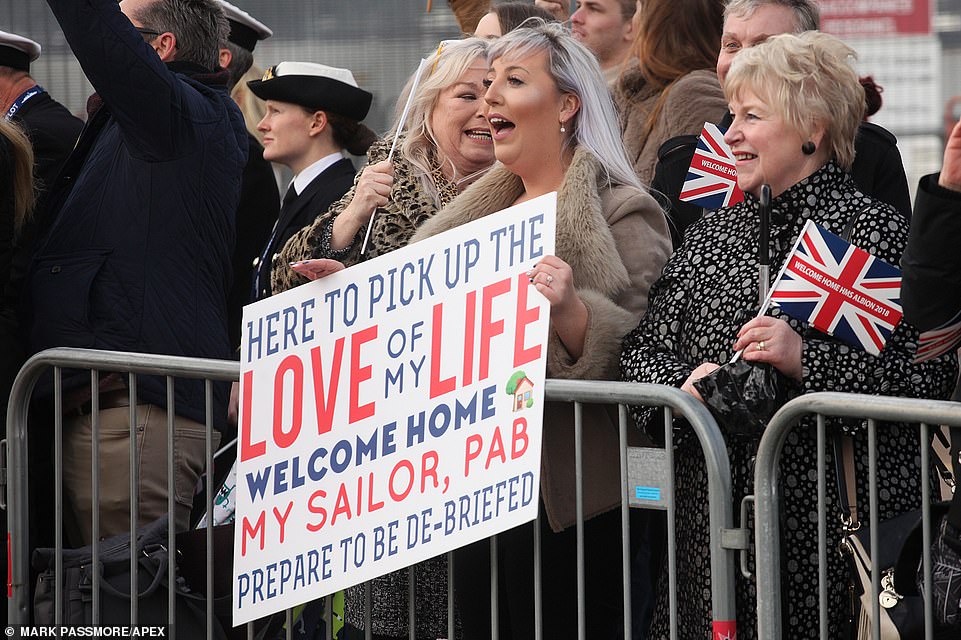 Aye captain: A sailor called ‘Pab’ was warned he was about to be ‘de-briefed’ on his return to British shores after ten months at sea

Training with E3s, Voyagers, Tornados, Typhoons and F-16s, Diamond practiced controlling a congested environment, observing and directing a variety of aircraft while operating with other UK Forces.

During her time in the Med, Diamond also spent a week on weapons and sensors training.

She held live firing exercises with the 4.5′ Gun, the 30mm, Phalanx and small arms, using her embarked Wildcat Helicopter from 815 Squadron at RNAS Yeovilton – callsign Roughcut – to observe and direct the firings onto the targets with impressive accuracy.

The first part of their deployment was to lead the Standing NATO Maritime Group 2 operating in the Mediterranean.

They were then re-deployed at short notice to go to the Far East demonstrating the Royal Navy’s global reach.

Highlights of Albion’s ten-month deployment have included a period of two months operating in and around Japan where the two navies had planned a combined amphibious exercise. 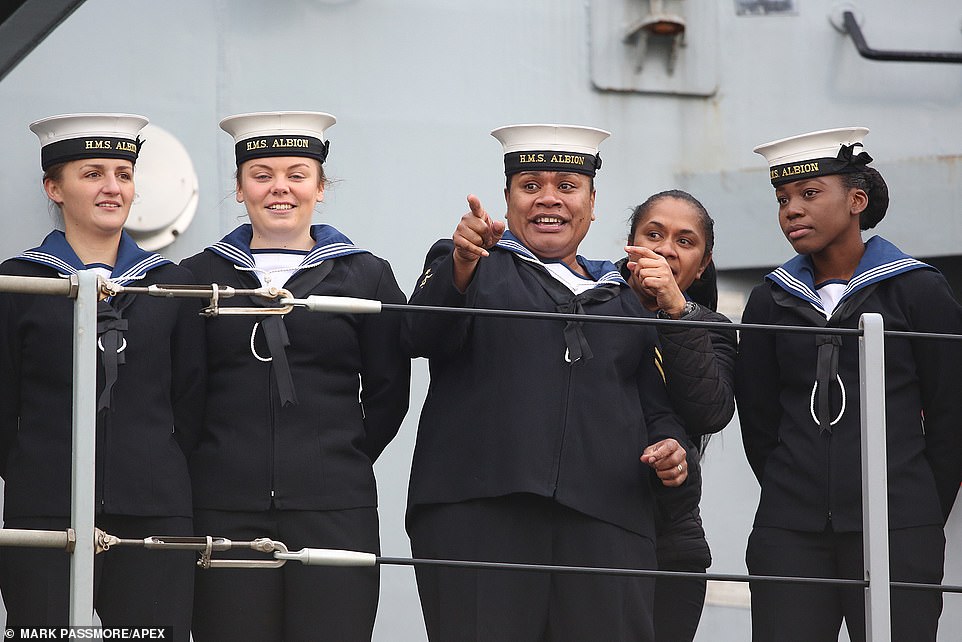 ‘There they are’: A sailor on board HMS Albion spots a family member in the crowd as the ship pulls into the dock after a ten month deployment 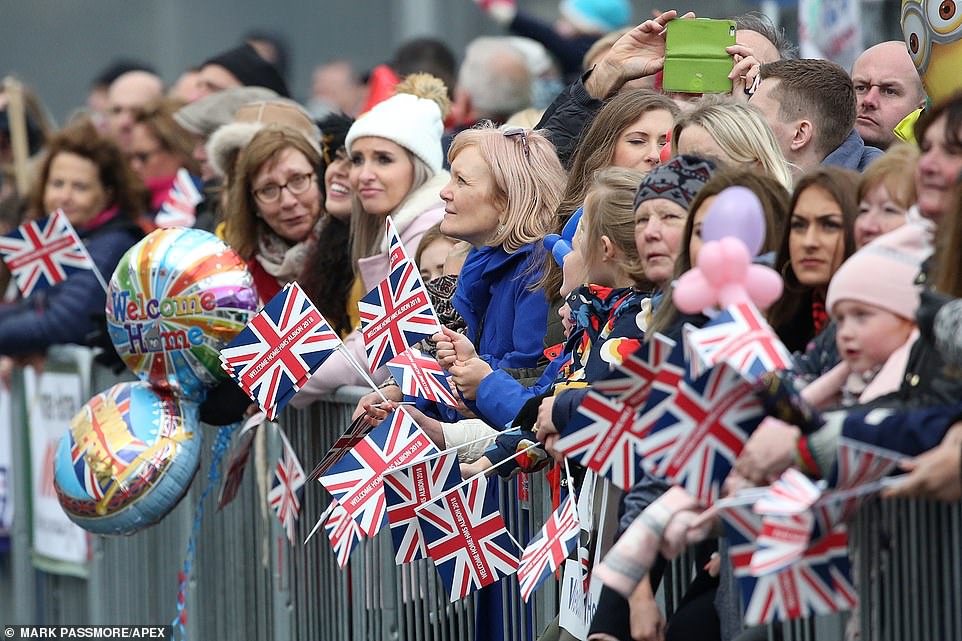 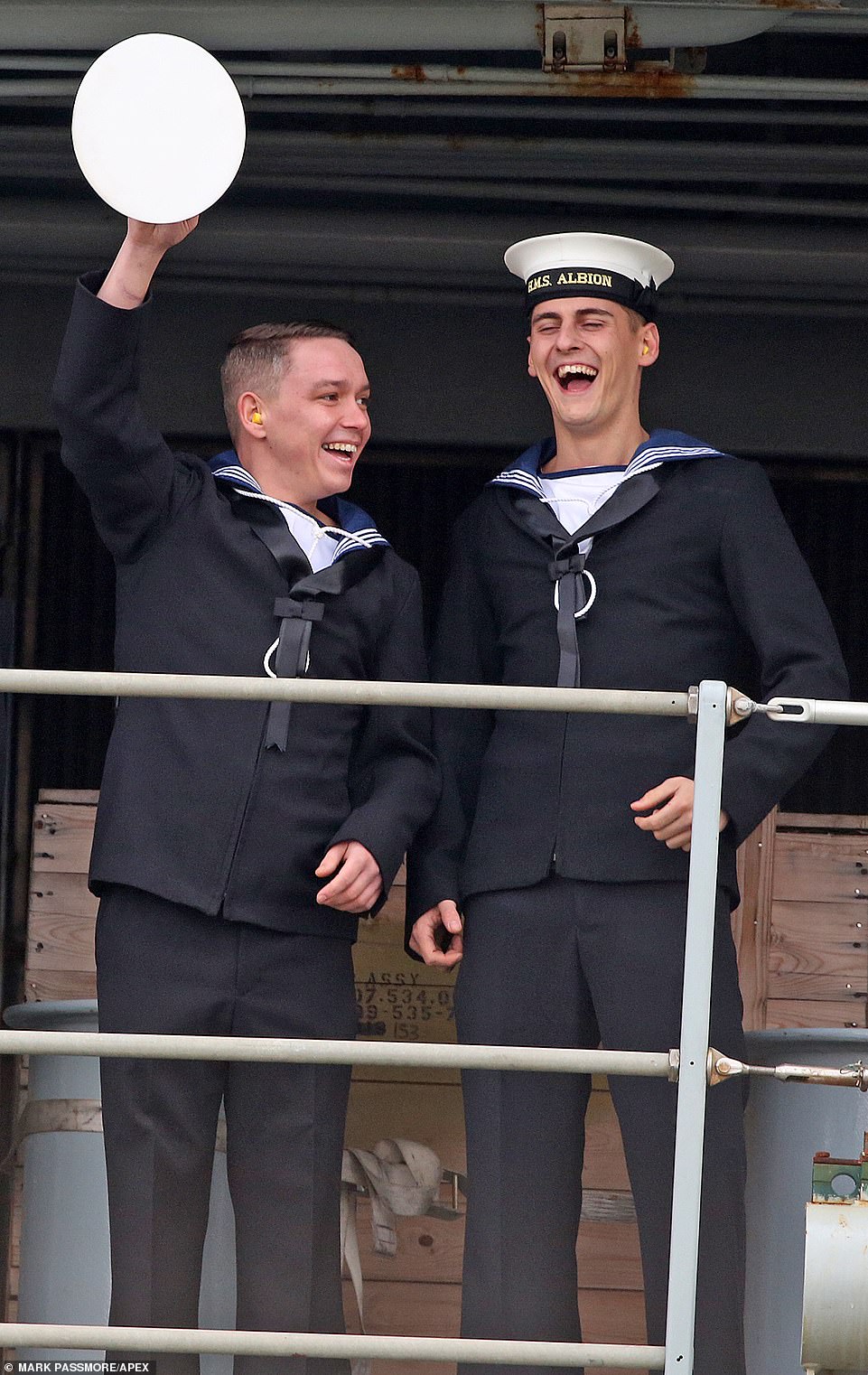 Since she left Devonport in Plymouth, Devon, HMS Albion has steamed 33,004 nautical miles that has taken her through the Mediterranean to the Far East 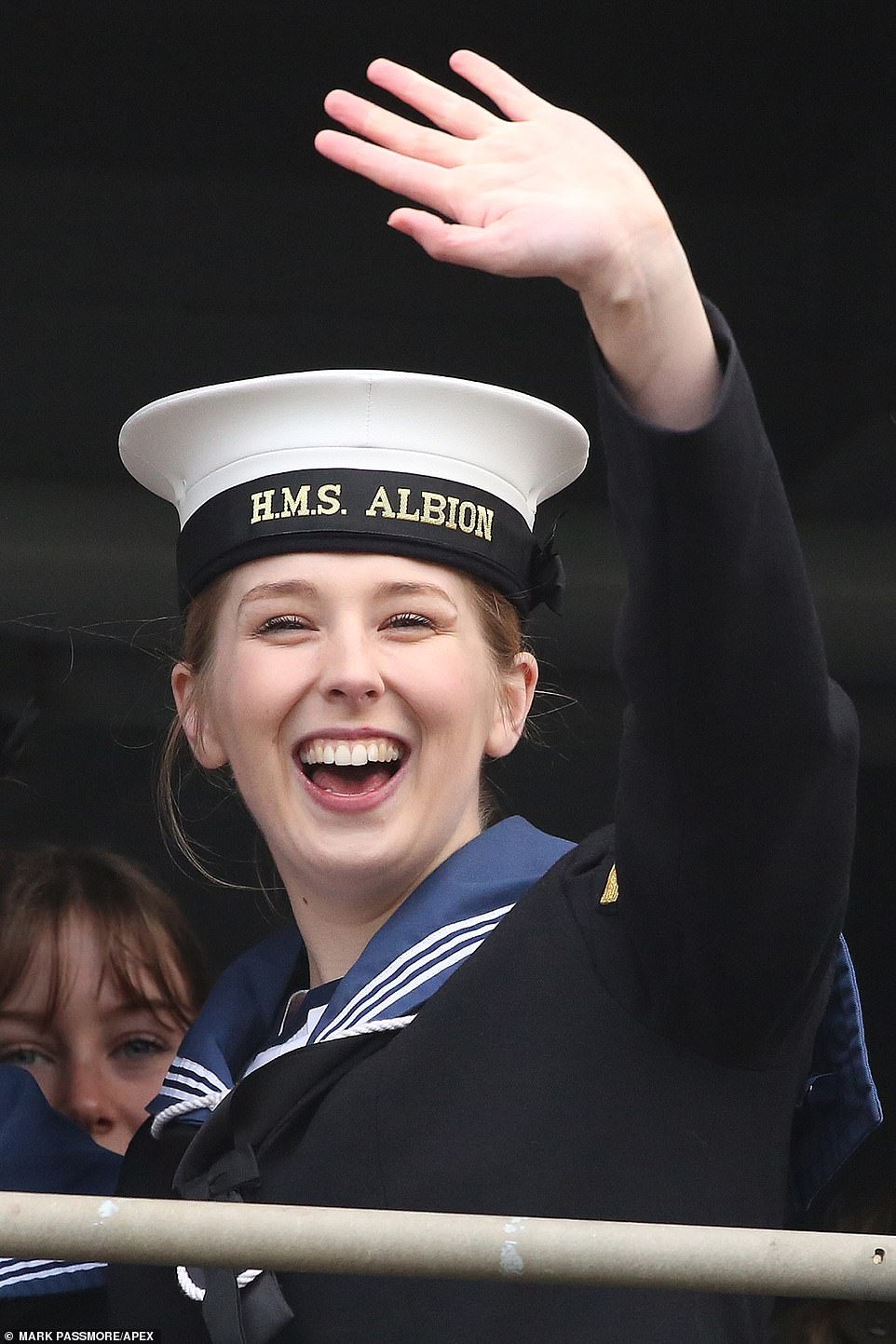 HMS Albion’s last act before turning for home was to lead the Royal Navy involvement in the largest military exercise staged in Oman in 17 years, Exercise `Saif Sareea 3′, involving 65,000 Omani and more than 5,000 British military personnel, including Royal Marines from 40 Commando

The two navies were thwarted by the arrival of Typhoon Cimaron and although not in the storm’s direct path, the planned landings would have been threatened by the weather.

Although the exercise was cancelled the planning represented a significant milestone for relations with the Japanese military.

On departure from Japan their assault ship Shimokita ploughed through the heavy seas alongside Albion saying goodbye with salutes of respect before breaking away while Albion continued on her way to Vietnam.

There were no problems with the weather though when the ship demonstrated their amphibious skills alongside His Majesty the Sultan of Brunei’s Forces in Exercise Setia Kawan With HMS Albion poised offshore, Royal Marines supported the Royal Bruneian Special Forces and Infantry in attacking a simulated target from the sea.

With helicopters flying low overhead, Landing Craft from HMS Albion put ashore commandos and Viking armoured vehicles onto the beach The enemy position was rapidly secured in a demo of the close co-operation between Brunei and the UK.

Her last act before turning for home was to lead the Royal Navy involvement in the largest military exercise staged in Oman in 17 years, Exercise `Saif Sareea 3′, involving 65,000 Omani and more than 5,000 British military personnel, including Royal Marines from 40 Commando. 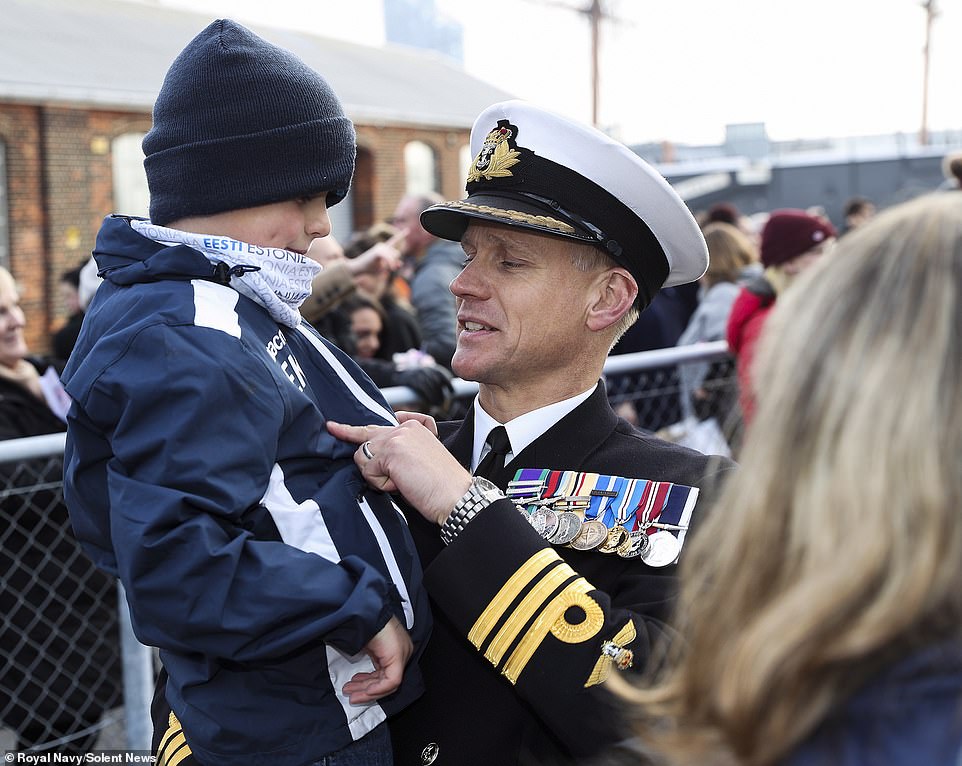 Commander Keith, the commanding officer of HMS Diamond greeting his family as he disembarks the ship as it arrives in Portsmouth 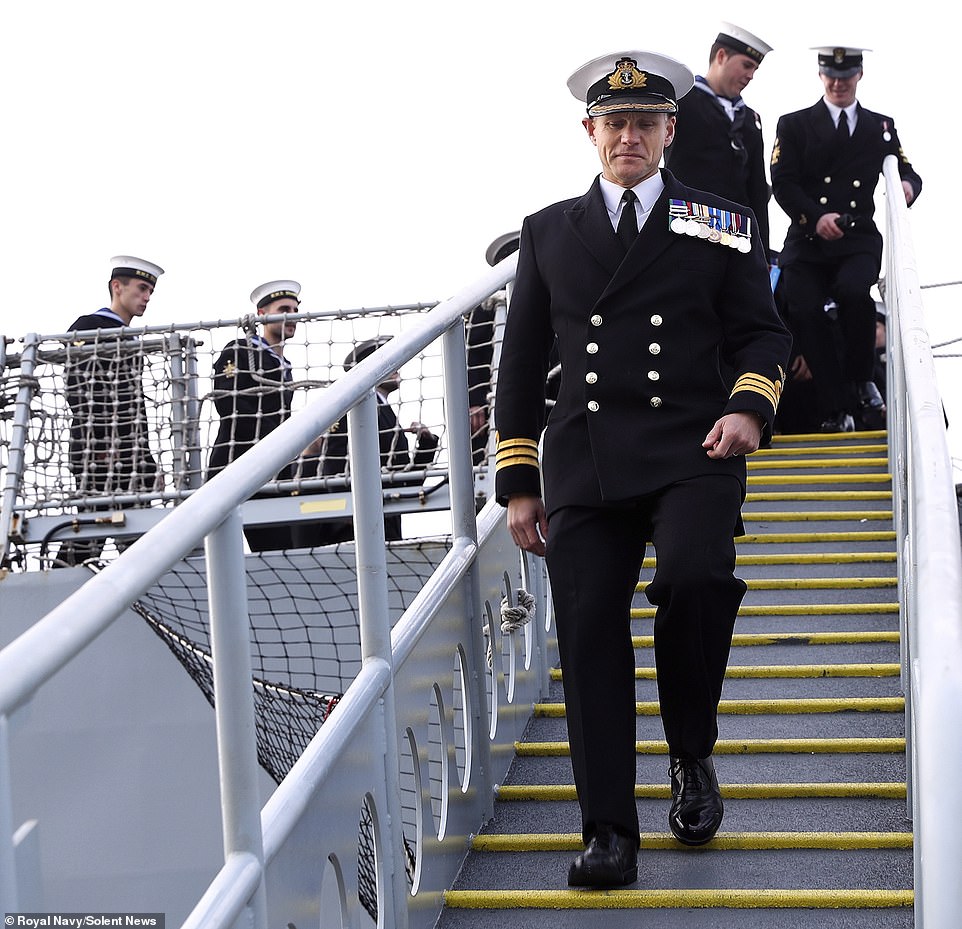 Cdr Keith, the CO of HMS Diamond disembarks as the first man off the ship as the ship returns home to Portsmouth 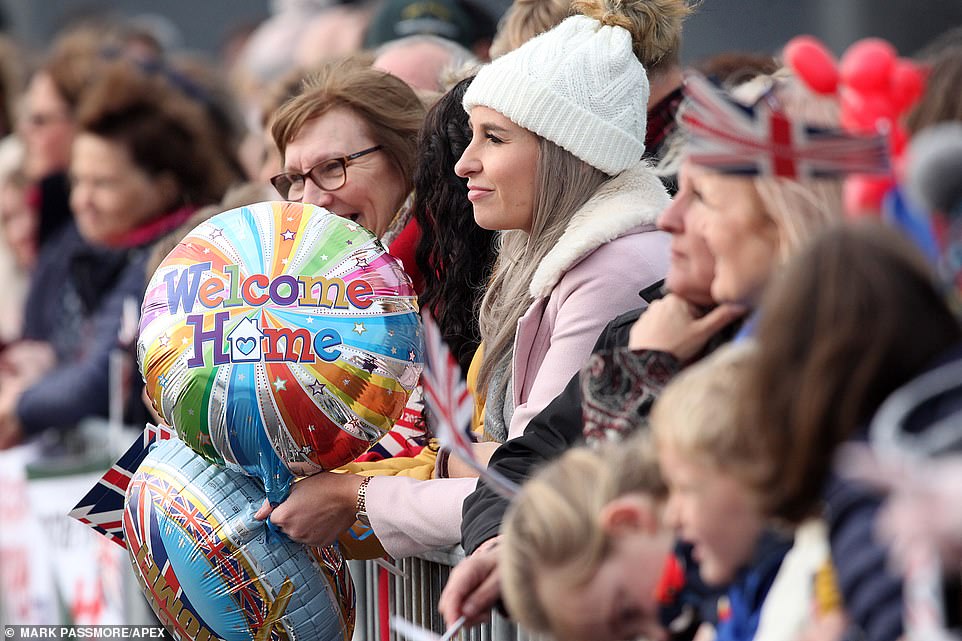 ‘Welcome home’: Crowds wait eagerly for the Royal Navy sailors to disembark from their ships so they came be greeted ashore 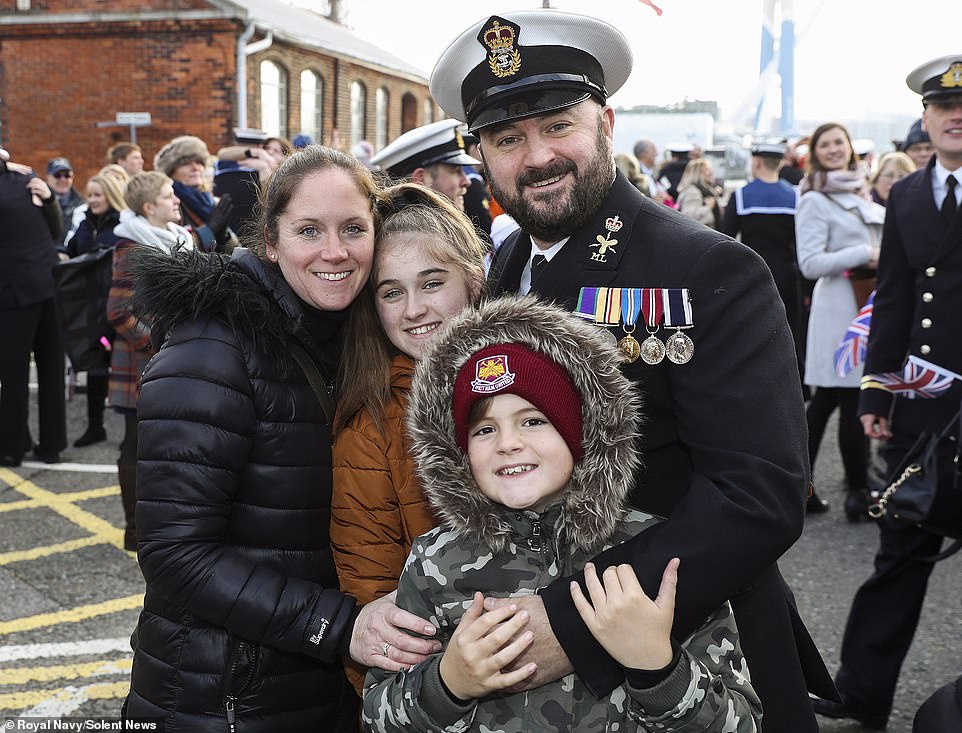 The exercise marked the culmination of everything Albion has worked towards all year and gave Albion the chance to lead a task group of Royal Navy and Omani warships under the Commander Amphibious Task Group, Commodore James Parkin and his staff.

Defence Secretary Gavin Williamson said: ‘HMS Albion and her crew of dedicated Sailors and Royal Marines have led from the front over the past 10 months.

‘Her deployment this year, along with HMS Sutherland and HMS Argyll, has meant that the Royal Navy has had a vessel in the strategically critical Asia-Pacific region for the first time since 2013 and has had an almost unbroken presence there this year.

‘As we exit the EU, Global Britain will be more outward-looking and engaged on the world stage.

‘The Nation’s flagship has exemplified what Britain stands for – promoting freedom of navigation, engaging with partners and allies around the world and fulfilling our global defence commitments.

‘She provides us with a unique platform from which to project our influence and throughout her service she has delivered time and time again, which is why I committed to protecting both HMS Albion and HMS Bulwark in September. 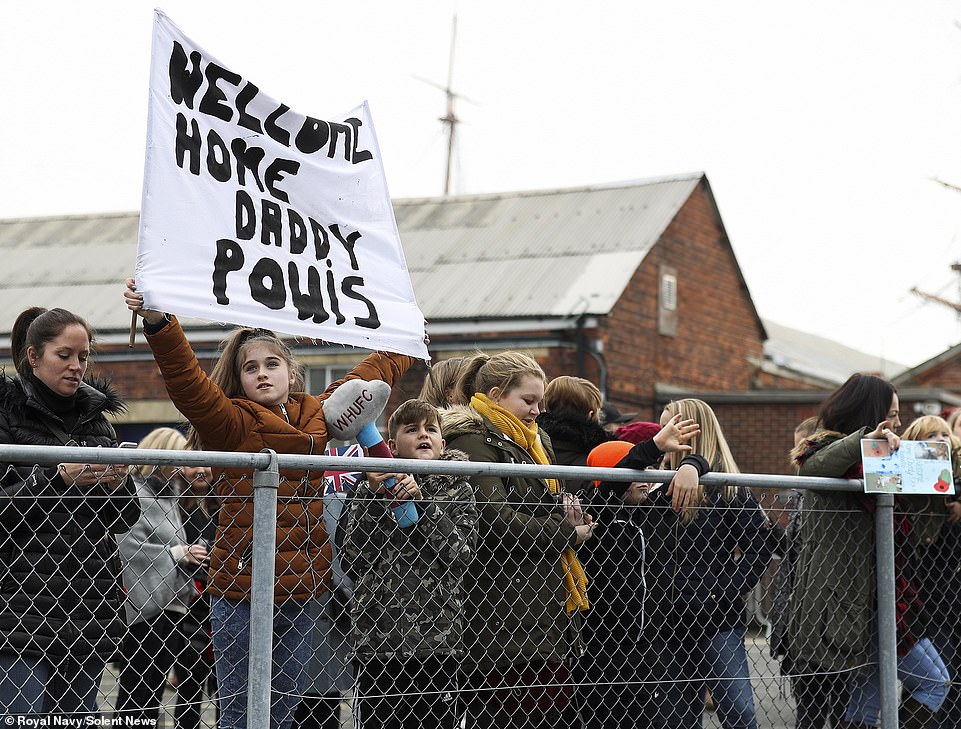 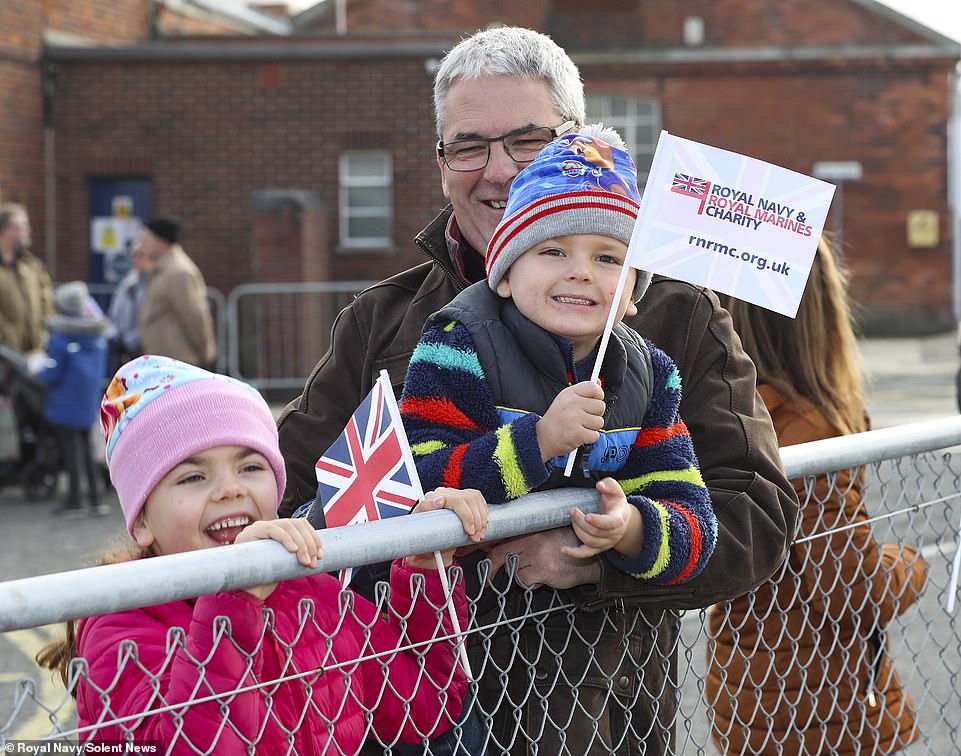 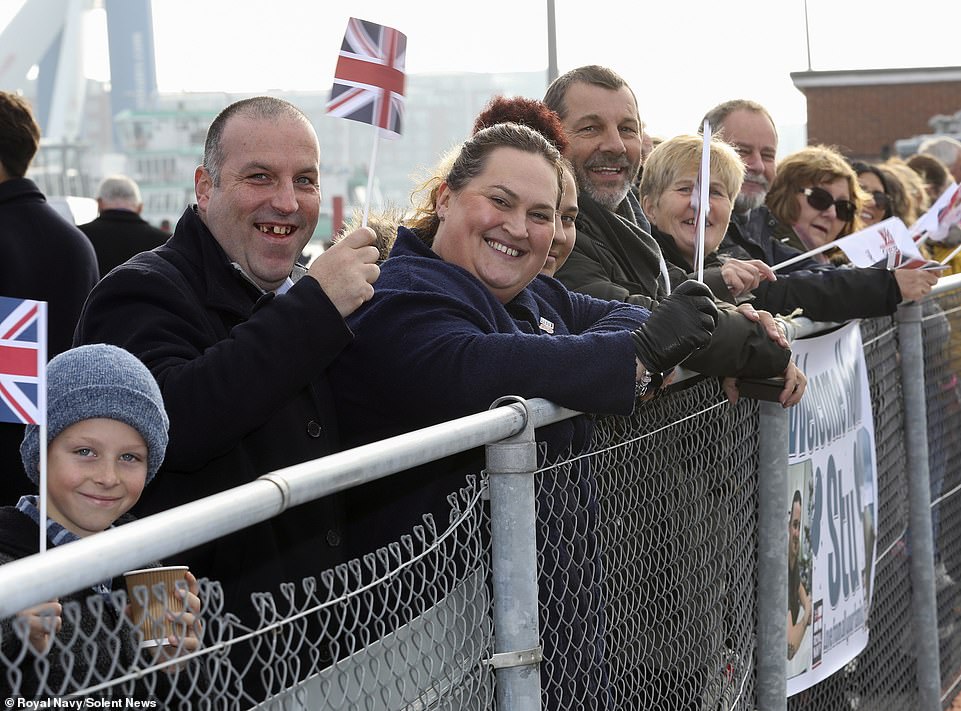 Crowds gathering for the homecoming of HMS Diamond in Portsmouth, where the Type 45 destroyer fired a 17-gun salute as it came into port 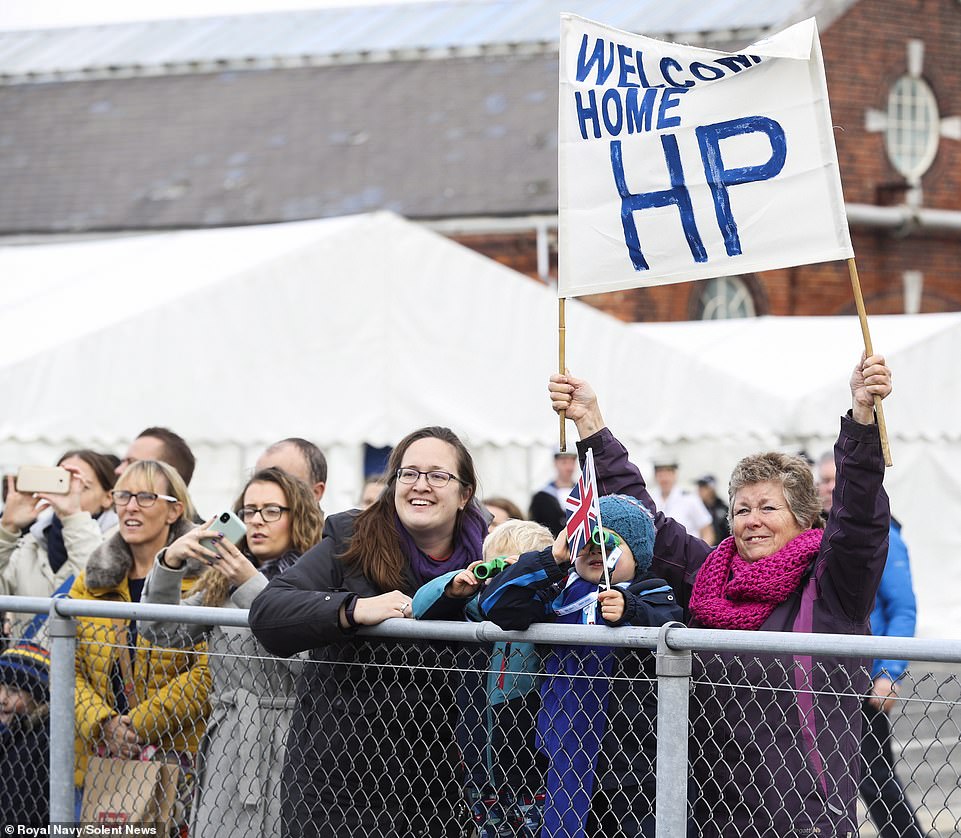 ‘Be it taking part in Saif Sareea 3, our largest exercise in 17 years or supporting UN sanctions in the Pacific this ship and her crew epitomise Britain’s global reach.’

It was a poignant moment for Captain Tim Neild as he guided the ship into the Plymouth for the last time.

He will hand over his command in January moving on to pastures new.

He added: ‘During the past ten months HMS Albion has upheld the United Kingdom’s commitment to Peace, Security, and Prosperity throughout the Asia Pacific and Middle East.

‘I am immensely proud of my 500 Sailors and Marines who have delivered success on operations with trademark professionalism, upholding the Rules Based International System.

‘I’d also like to pay tribute to our families back home.

‘They provide us with some fantastic support which enables us to focus on our jobs.’