Heartbreaking moment father is told he has a brain tumour

This is the heartbreaking moment a father-of-two was told he has a brain tumour, before being later diagnosed with the same cancer that Dame Tessa Jowell is battling.

Richard Powell, 54, from south London, was rushed to A&E with a suspected stroke after suffering a seizure in the middle of the night.

It later emerged that he had been suffering episodes where he would struggle to speak, which he had believed was down to stress.

However, a CT scan later revealed that he had a mass on his brain, with further tests showing he had a Grade 4 glioblastoma.

Richard Powell, 54, from south London, was diagnosed with a bran tumour after being rushed to A&E following a seizure

‘There’s no point saying it’s going to be alright. All you can do is say that you’re going to be here, whatever happens.’

Richard, who works in the aviation insurance industry, added: ‘In my early days, I  took the view that I’d live into my 70s and 80s.

‘To suddenly say Richard, that may not even be an option to you, that’s a real shock. It’s something i’m still coming to terms with.’ 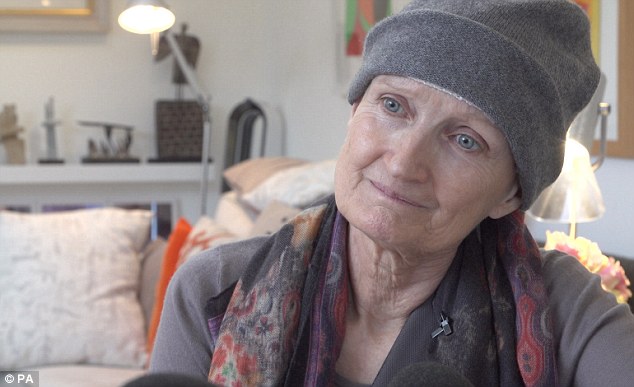 In Tuesday’s episode of the show, Richard is seen being rushed to A&E with a suspected stroke.

His wife Mary described how she’d woke up in the middle of the night to him having a seizure, with his whole body shaking uncontrollably.

Describing what happened, Richard added: ‘I just opened my mouth and I couldn’t really get my words out. I just couldn’t, I couldn’t come out with any. I feel it’s stress.’

Mary explained how a similar thing had happened during a trip to Inverness, when her husband became emotional and struggled to speak. 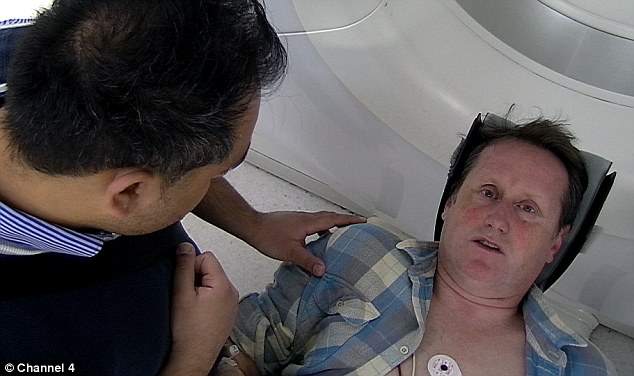 Richard, who works in the aviation insurance industry, is seen visibly struggling to speak when the doctor asks him if he can say anything 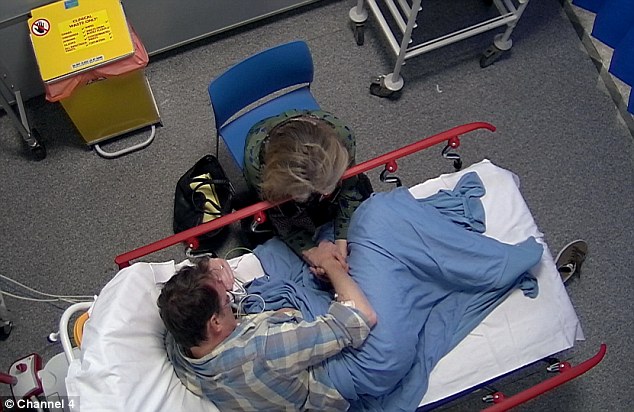 Later in the show, Richard is seen having one of these seizures before having his CT scan.

A nurse asked him whether there is anything that he’s allergic to, but he was unable to reply.

The doctor was then called, who asked Richard to attempt to speak – but he was seen visibly struggling to do so. 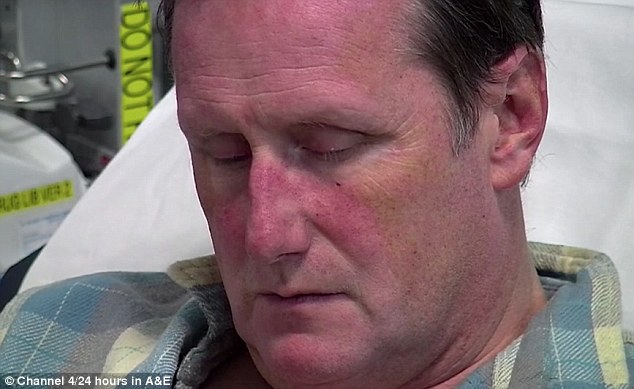 Richard was told that it was the mass on his brain that was affecting his speech, rather than his stress or anxiety as previously believed 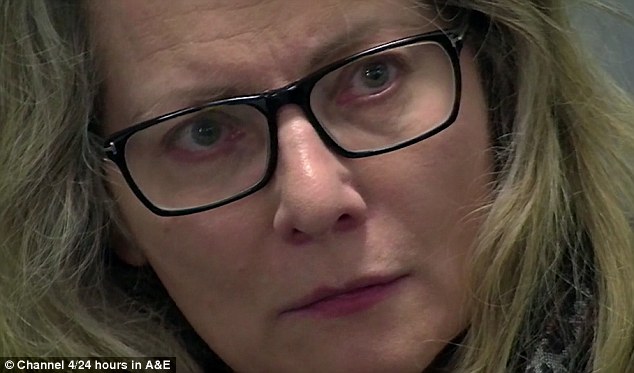 His wife Mary said she was ‘absolutely devastated’ by the news, adding that ‘all you can do is say that you’re going to be here’

However, the doctor diagnosed that the father-of-two was having focal onset seizures, with the CT scan showing that he had a mass on his brain that was affecting his speech.

Later in the episode, Dr Vijay Nar is seen breaking the bad news to Richard and his wife Mary.

‘On the scan, there is a small mass that we have found.

‘Sometimes it’s very difficult.. it can sometimes be like stress, and it can like anxiety,’ he explained. 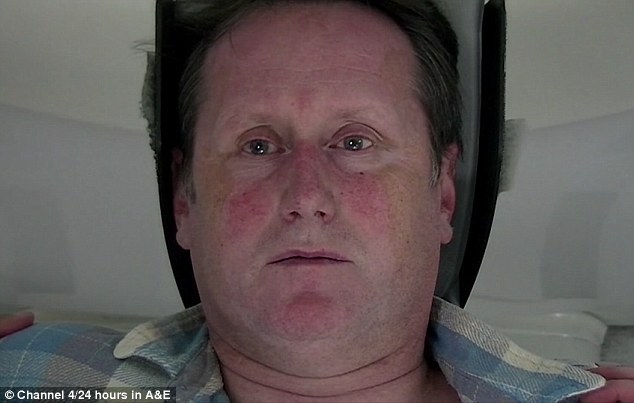 Richard had previously put down his struggles with speech down to stress, but they had in fact been seizures caused by his brain tumour 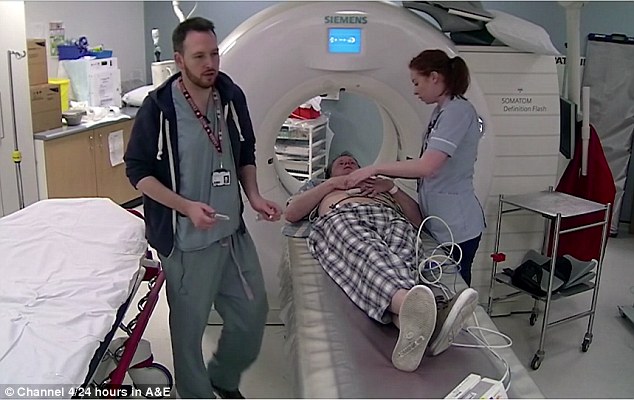 Further tests showed he has a Grade 4 glioblastoma, which is fast growing. He is currently undergoing intensive chemotherapy and radiotherapy 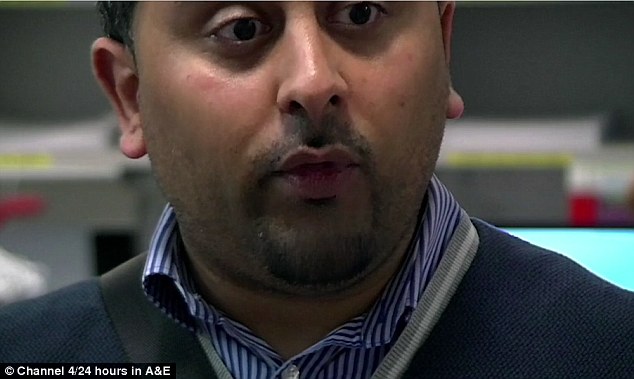 WHAT IS A GLIOBLASTOMA?

Glioblastomas are the most common cancerous brain tumours in adults.

They are fast growing and likely to spread.

Glioblastomas’ cause is unknown but may be related to a sufferer’s genes if mutations result in cells growing uncontrollably, forming a tumour.

Treatment is usually surgery to remove as much of the tumour as possible, followed by a combination of radio- and chemotherapy (chemoradiation).

It can be difficult to remove all of the growth as glioblastomas have tendrils that extend to other regions of the brain. These are targeted via chemoradiation.

Glioblastomas are often resistant to treatment as they are usually made up of different types of cells. Therefore, medication will kill off some cells and not others.

The average survival time is between 12 and 18 months.

Only 20 per cent of patients live longer than a year and just three per cent survive over three years.

‘What you’re having is real. It’s related to abnormal electric activity created by a small mass.’

It is later revealed that Richard has a Grade 4 glioblastoma, a type of brain tumour, that was fast growing.

He is now undergoing intensive chemotherapy and radiotherapy, with the tumour currently stable.

It comes after it was revealed that former Cabinet member Baroness Tessa Jowell was diagnosed with a brain tumour in May 2017 after suffering two ‘powerful’ seizures in a taxi.

Her diagnosis came as a complete shock as she had previously suffered no symptoms.

Her daughter Jess Mills told FEMAIL in an interview: ‘Just the day before she had been telling me how great she felt.

‘Two days after she was rushed to hospital they found a tumour.

‘Mum was serene and composed and totally grounded, we were all in pieces as you can imagine.

‘She was resolved that whatever it was we were going to fight it tooth and nail, optimistic and bold in her outlook as she always is.’

During a candid interview on BBC’s Today programme, Baroness Tessa, 70, revealed she had ‘no idea’ how long she has left.

Stumbling over her words several times, she added that ‘the tumour bloody well does this to you’.

May 2017: Labour grandee Tessa Jowell, who has two children and three stepchildren – including the food blogger Deliciously Ella – suffers two ‘powerful seizures’ in a taxi, she would later reveal. She had suffered no symptoms previously.

Two days later she is told she has a brain tumour – glioblastoma, an aggressive and rare form. It is operated on the following week.

Baroness Jowell was treated by the NHS for her cancer but doctors in Britain told her that they could do nothing more for her so she looked to other countries for her hunt for treatment.

She has been to Germany looking at trying a new immunotherapy, and vowed to keep seeking new ways of tackling the cancer.

17 September 2017: Baroness Jowell reveals she is being treated for brain cancer in a Twitter post marking her 70th birthday. She pledges to help other people fighting the disease.

24 January 2018: Speaking publicly about her illness for the first time in a moving interview with BBC Radio 4, Baroness Tessa says she has ‘no idea’ how long she has left.

Her cancer is very advanced and she stumbles over her words several times during the interview – telling the presenter, ‘the tumour bloody well does this to you’.

25 January 2018: Baroness Jowell wins heartfelt applause in the first ever standing ovation in the House of Lords as she returns to Parliament to plead for new cancer treatments.

She delivers an emotional speech to peers, leaving many in tears. She reveals just 2 per cent of cancer funding was spent researching brain conditions and warned no drug breakthroughs had been made in 50 years.

22 February 2018: Theresa May shares an emotional moment with Baroness Jowell as she announces a £45million boost to improve care for the disease threatening to claim her life.

The government has announced £20 million in funding for research into brain tumours over the next five years, which will be added to £25million from Cancer Research UK.

A centre focusing on adult brain tumours is due to open later this year.