A schoolmate of Karl Stefanovic told the Today host his mother had died live on air while stuck in hotel quarantine after the Queensland government refused to let him see her.

Anthony McCormick went to Saint Augustine’s College in Cairns with Stefanovic growing up, and joined the show on Thursday morning to talk about attempting to get out of quarantine to say goodbye to his dying parent.

He instead informed the Today host on air that his mother had died the night before and he’d been unable to see her despite desperately travelling home from Canada.

‘Anthony joins us from hotel quarantine. Anthony, I wish it was under better circumstances, my man, in talking to you. Firstly, how are you doing? How is your mum doing?’ Stefanovic asked.

‘G’day, Karl. She passed away last night,’ his schoolmate replied as Stefanovic and co-host Allison Langdon broke down.

‘We had no idea Anthony, we were hoping to help get you out to see your mum in time,’ Langdon replied through tears.

‘Thought we might get another week. Sort of the end of the road there. She was very upset that I couldn’t get in there and see her.

‘That was really what she was hanging on for. The situation is I’ve got 12 days in this room now to sort of process this thing on my own.’

Langdon was inconsolable as he told his story, saying his mother had only fallen sick three weeks ago and she was ‘desperate’ to see him get back.

‘It is awful man, the pain you are feeling right now, we’re feeling a tiny bit of it and we didn’t even know your mum,’ Stefanovic said.

Mr McCormick said he had to get a negative test within 72 hours of his arrival and that he was unable to find direct flights to Brisbane for less than $15,000.

The devastated son said he was ‘economically forced’ to fly to Sydney, given the restrictions of numbers coming into the country, and slammed the Queensland government for their lack of compassion and assistance.

‘NSW Health were amazing, they had proactively called me before I got on the flight, had an exemption plan laid out and while I was on the flight they’d executed it.’ 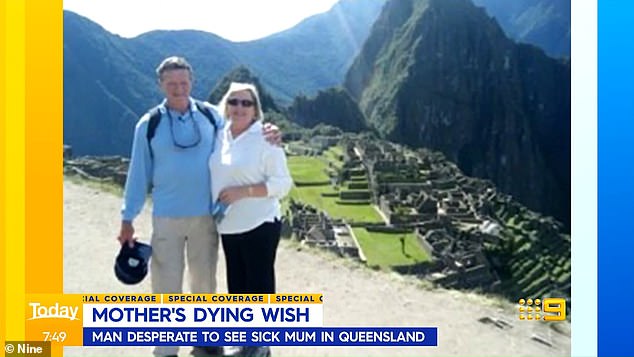 Mr McCormick says he’s now looking for answers as he spends the remaining 12 days of his quarantine mourning his mother.

‘There’s no context here. There’s no feedback. I can’t touch anyone. I can’t see anyone. Beyond the odd sort of call. It’s me and these four tiny walls for the next 12 days,’ he said.

‘It’s all about my mum. She was desperate to see me,

‘I would have been far better off staying in Canada, to be honest, where my wife is, freedom to get outside and so forth.’

Langdon slammed the lack of compassion shown by state and federal governments in helping Australians say goodbye to family members.

‘We saw a football game in Queensland last night, with crowds and people not wearing masks. That’s fine, but we can’t find a way this long into a pandemic to let loved ones see a dying relative. It’s heartless,’ she said through tears.