A California cop who was shot dead by an illegal immigrant hours after Christmas is pictured in a newly-released photo smiling next to his loved ones in front of a holiday tree.

Newman Police Department Corporal Ronil Singh, 33, was making a traffic stop as part of a DUI investigation in the town of Newman early Wednesday when he called ‘shots fired’ over his radio, the Stanislaus County Sheriff’s Department said. That’s when he was tragically killed.

Police have not yet tracked down the suspect, who Stanislaus County Sheriff Adam Christianson confirmed was in the United States illegally.

Singh is seen in the photo posing next to his wife, Anamika, their five-month-old son and his dog.

The department said Thursday evening that detectives performed a search warrant at a property in El Nido  of Merced County, but had no luck.

‘The suspect was not located at the property and the investigation remains fluid. We will have no details at this time regarding the search warrant,’ the department said.

Christianson said the suspect ‘doesn’t belong here’ and that ‘he is a criminal’.

Officer Ronil Singh of Newman Police Department is survived by his wife, Anamika, and a five-month-old son, who are pictured next to him on Christmas 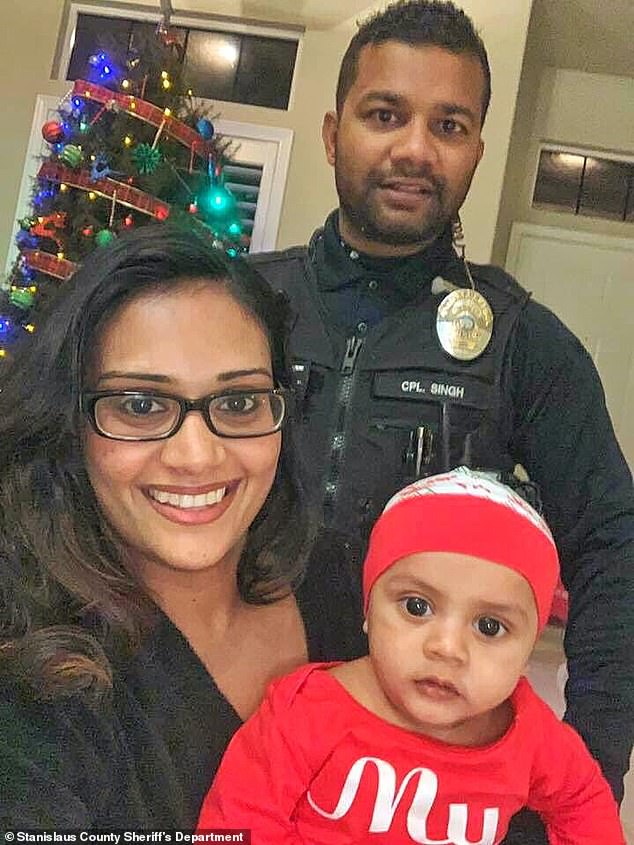 The late cop is pictured in another heartbreaking photo with his family, just hours before he was shot dead

President Donald Trump on Thursday seized on the case of the illegal immigrant cop-killer to renew his argument that the U.S. should erect a wall on its southern border.

‘There is right now a full scale manhunt going on in California for an illegal immigrant accused of shooting and killing a police officer during a traffic stop,’ Trump tweeted.

‘Time to get tough on Border Security. Build the Wall!’

Singh had pulled over a gray pickup truck in the small town 100 miles south of San Francisco, after noticing it had no license plate.

Signh fired back to defend himself, Christianson said.

Trump also quoted a 2011 tweet from former President Barack Obama, who was repeating a line from his State of the Union address when he wrote: ‘I strongly believe that we should take on, once and for all, the issue of illegal immigration.’ 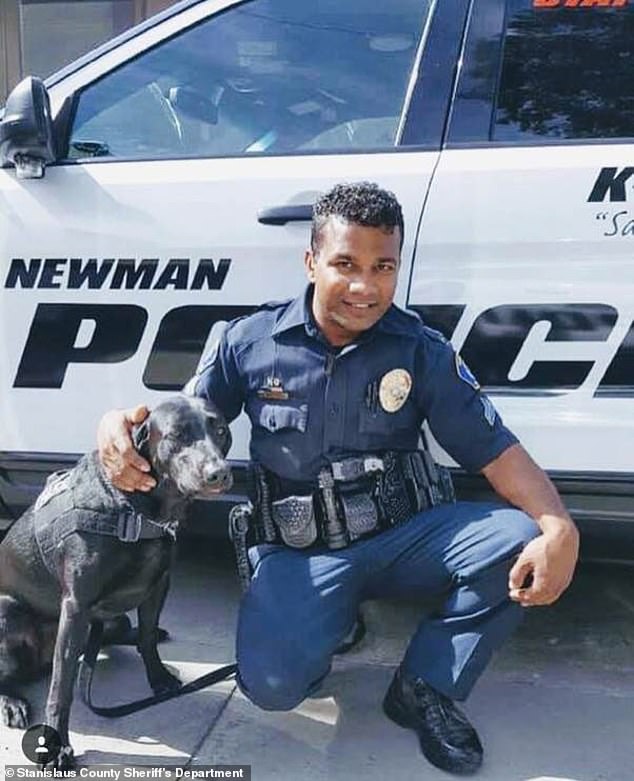 Singh was killed by an unidentified suspect. The Stanislaus County Sheriff’s Department said Singh was conducting a traffic stop early Wednesday in the town of Newman, California when he called out ‘shots fired’ over his radio 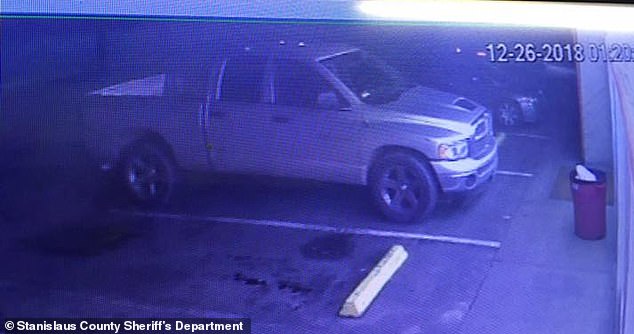 Police are hunting a man who is in the US illegally and is accused of killing a California police officer on Wednesday, after finding the truck believed to belong to the suspect (pictured) 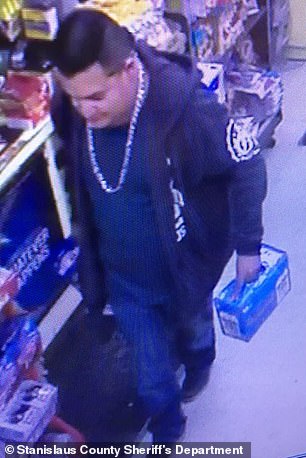 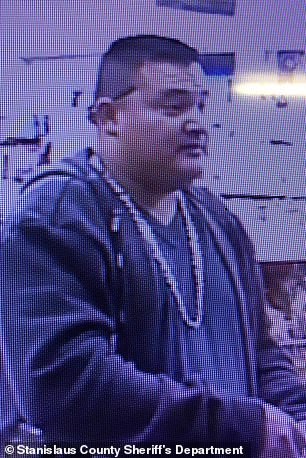 Christianson has flown in Trump’s orbit before. He sat next to the president during a May 16 event at the White House focused on opposition to ‘sanctuary city’ policies that prohibit law enforcement agencies from cooperating with federal immigration authorities.

‘There shouldn’t be anybody interfering with a sheriff’s ability, a chief’s ability, or anybody in this room at this table today from defending people against those who exploit and victimize them,’ he said then.

Authorities in California’s central valley have found the truck believed to belong to the unnamed suspect who remains at large.

The vehicle, believed to have been the one stopped by Singh, was found in a garage in a mobile home park about four miles away from the scene of the shooting.

The silver extended-cab Dodge Ram 1500 pickup truck was seen in the area at the time of the shooting, and had paper plates on the vehicle, which read ‘AR Auto.’ 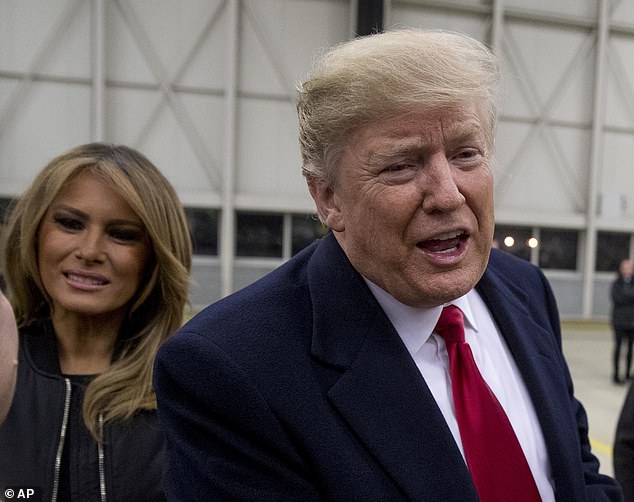 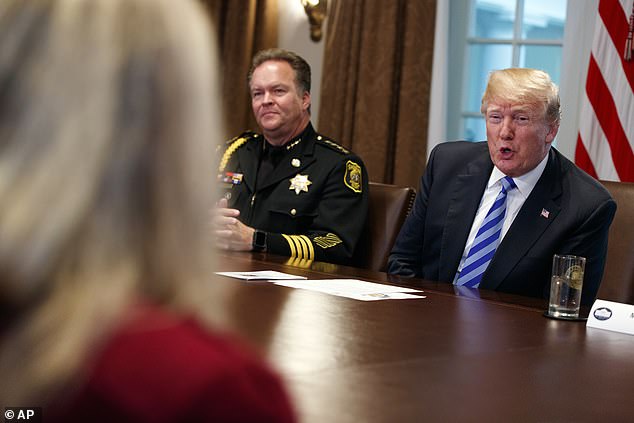 Stanislaus County Sheriff Adam Christianson (left) identified the fugutive suspect as an illegal immigrant. Christianson sat next to Trump in May at the White House during a roundtable event focused on opposition to ‘sanctuary city’ policies

Trump also quoted a 2011 tweet from Barack Obama, who sounded Trumpian in his opposition to illegal immigration during his 2011 State of the Union address

Working from several tips from the public, police discovered it about 13 hours after the shooting at a River Road mobile home park just south of Azevedo Road, where law enforcement officers were serving a search warrant.

Police confirmed the pickup was the one believed to have been driven by the suspect.

‘There’s lots of potential evidence,’ a police spokesperson said. ‘Fingerprints, DNA, gunshot residue and physical evidence. We’ll be processing the truck to get any evidence to help in the prosecution.’

The unidentified suspect, who was pictured on security camera footage entering a store shortly before the fatal shots were fired, remains a fugutive.

Singh was found with multiple bullet wounds, and was taken to a local hospital where he was pronounced dead.

The sheriff’s office released surveillance stills of the suspect and the gray pickup truck found near the location of the shooting.

The suspected gunman appears in the images in an unzipped hooded sweatshirt and  wearing a gold chain while purchasing items in a store. 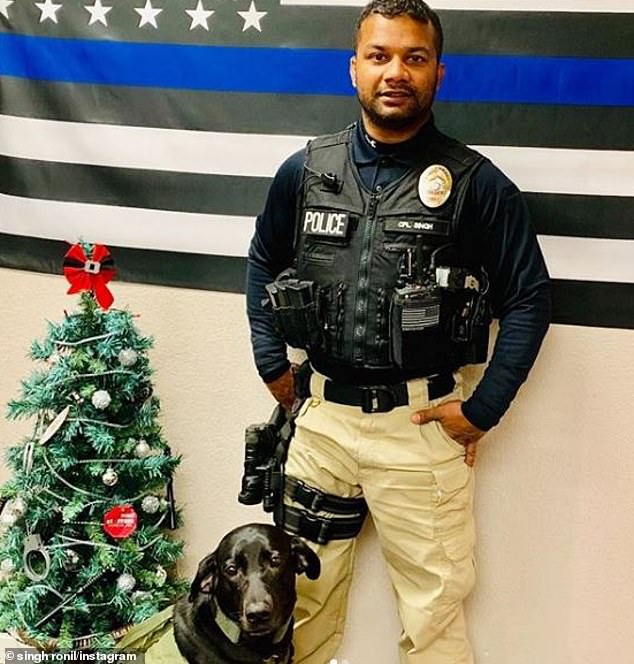 Singh was found with multiple bullet wounds, and was taken to a local hospital where he was pronounced dead 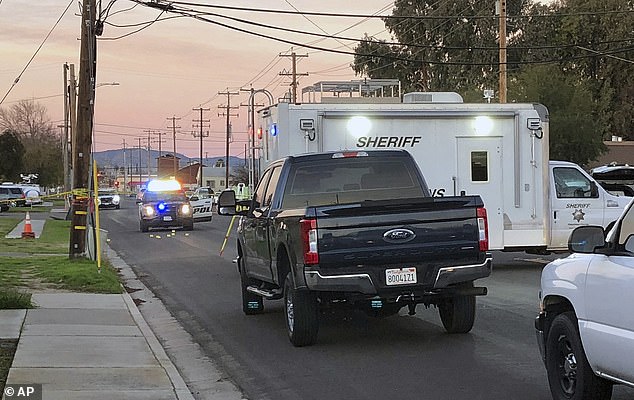 Singh was a native of Fiji and the father of an infant son. He joined the Newman police force in 2011.

‘He was living the American dream,’ said Stanislaus County Sheriff’s Deputy Royjinder Singh, who is not related to the slain officer but knew him.

On his Facebook page, Singh posted Christmas Eve pictures from a deep-sea fishing trip that produced a big haul of crabs and fish.

The profile picture shows him smiling as he stands at a patrol car with a dog – the same photograph of the officer released by the sheriff’s department.

The slain officer lived in Modesto. He’s survived by his wife, Anamika, their son, his parents and brother.

Outgoing California Gov. Jerry Brown offered condolences to Singh’s family and said flags at the state Capitol would fly at half staff in his honor.