Most people find it more difficult to move around as they get older.

But the problem is much worse for patients battling a rare condition which slowly turns their muscles into bone.

Thozi Mciki, 50, has fibrodysplasia ossificans progressiva, known as FOP, which causes fragments of bone to grow in muscles all over the body.

He first started showing signs of the genetic condition, which affects around one in a million people, when he was just a few months old.

Since then, he has lost the ability to walk without help, his hands are the only part of his upper body he can move, and his hips and legs are nearly totally stiff.

And 18-year-old Damian Fredericks is in the earlier stages of the same condition – still able to play football but showing signs of his limbs stiffening up. 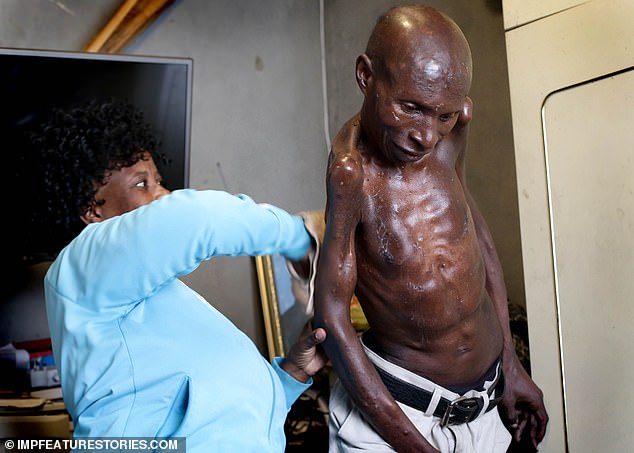 Thozi Mciki, 50, has fibrodysplasia ossificans progressiva, known as FOP, which is turning is muscles into bone and means his hands are the only part of his upper body that he can move 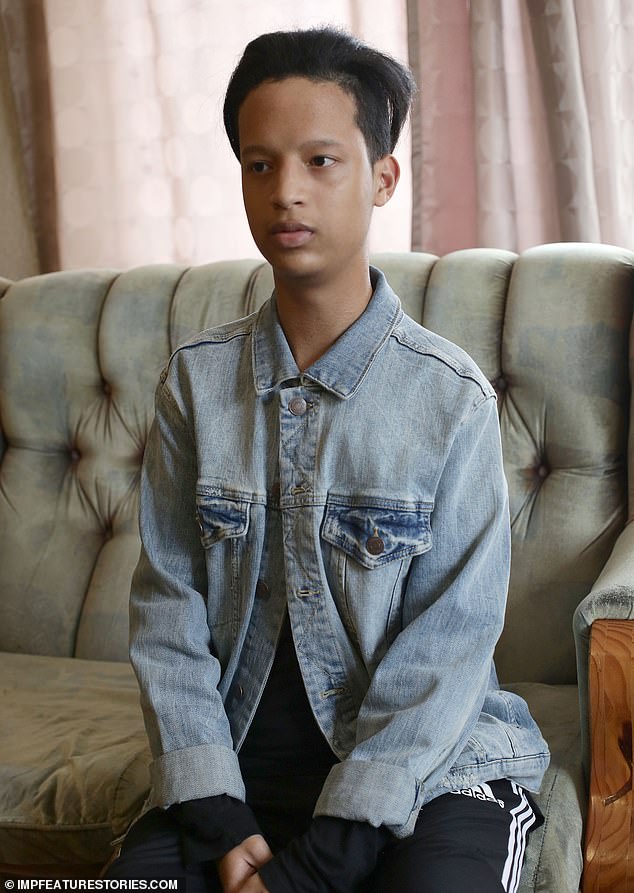 Damian Fredericks, 18, has the same condition and has limited movement in his upper body but can still use his legs so is able to play football with his friends

‘I talk to people about FOP and they are no longer afraid when they see me,’ said Mr Mciki, from Guguletu, a town near Cape Town in South Africa.

His thin arms are frozen solid beside his twisted torso and he relies on the full-time care of his sister, Gladys, to do many everyday tasks.

Mr Mciki was officially diagnosed with FOP when he was seven, and could walk on his own until 2008, when he had to get a walking stick.

But within three years even the walking stick was not enough to help him and he now uses an electric wheelchair, donated by a charity called the Blaahs Society, to get around.

Using a wheelchair creates problems of its own, however.

Mr Mciki uses a toilet in a building outside the back of his house, and his wheelchair won’t fit through the passage so he has to use his stick and lean against a wall to make it there.

‘Although I have this wheelchair it is difficult to move around,’ said Mr Mciki. ‘These houses are too small. It’s not safe for me to even walk to the toilet.

‘In 2014, on a Sunday morning, I went to the toilet and when I got to the doorway I stepped in a hole and fell.

‘I was hospitalised for three weeks and couldn’t feel one side of my face.’ 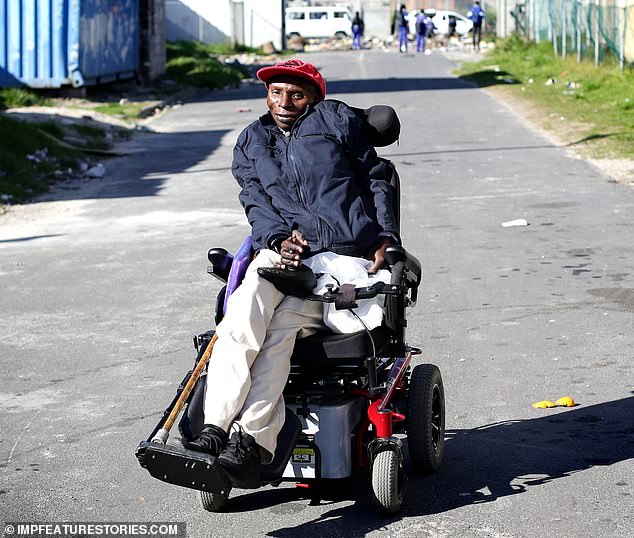 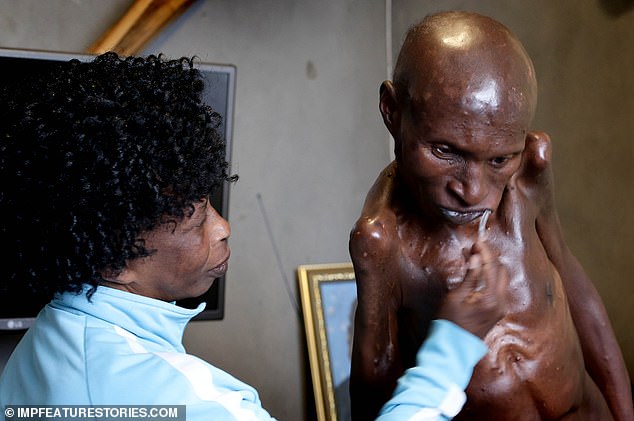 Mr Mciki relies on the full-time care of his sister, Gladys, who had to quit her job to look after him, and says he would like to be able to have a toilet in his house and a shower with handrails so he can regain some independence

WHAT IS  FIBRODYSPLASIA OSSIFICANS PROGRESSIVA?

It causes bone to form in muscles, tendons, ligaments and other connective tissues.

Ridges of extra bone develop across joints, progressively restricting movement and forming a second skeleton that imprisons the body in bone.

There are no other known examples in medicine of one normal organ system turning into another.

FOP can eventually result in death when the cartilage holding the ribs together also solidifies, making it impossible to breathe.

Patients may eventually suffocate or suffer a cardiac arrest as their bodies attempt to get enough oxygen.

FOP is a genetic condition which usually begins in early childhood, when small lumps of bone form within soft tissue, usually muscle.

Over time more of the lumps – which can be triggered by injuries – grow and muscles are gradually replaced by bone, eventually making it impossible to move.

The condition does not shorten people’s lives by itself, and in developed countries patients can live long lives – however, reduced movement in the chest can mean infections are more serious because the cough reflex is weaker.

Mr Mciki longs for a toilet in his room and a shower with low-set handrails to help him keep some sense of independence.

‘It would make life easier if my sister did not have to wash me in my room and I could just have a shower to stand in,’ he said.

Despite obvious difficulties, Mr Mciki remains positive and has not let FOP stop him from achieving things in life.

‘I am here to encourage the other FOP warriors to accept education,’ he said.

‘Just because you have FOP doesn’t mean you can’t be employed or get an education.

‘There is always hope and the young girls in school with this condition, they shouldn’t stay inside and be shy just because they are different to others.’

Mr Fredericks, from Kuils River, also near Cape Town, is one young person who is trying to live a normal teenager’s life with FOP.

Mr Fredericks, 18, was diagnosed with the condition in September 2009.

His father, Joseph, said: ‘I noticed his toes when he was a baby and we went to a paediatrician who said it was just a bunion and they will take care of it at a later stage. Back then doctors didn’t know what FOP was.’

However, Mr Fredericks began to suspect something was seriously wrong when he was playing cricket with his sports-mad son one day. 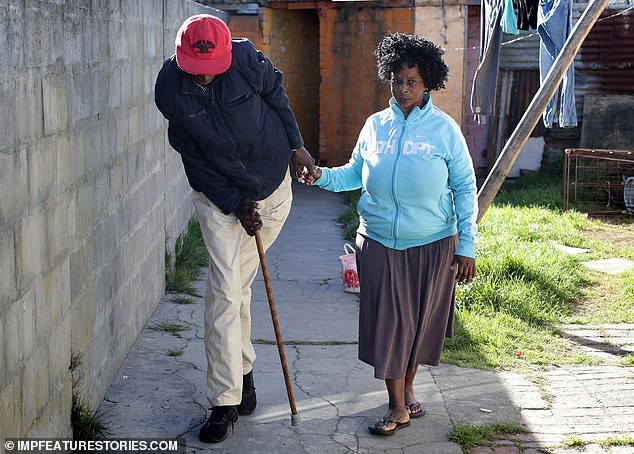 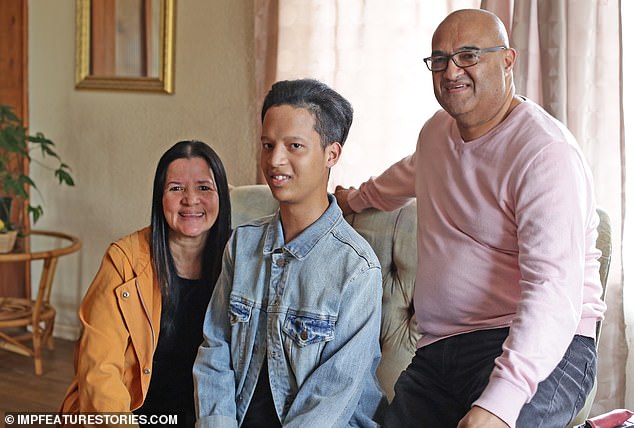 Damian Fredericks’ parents, Freda and Joseph, lost their money and had to move to a shared house near Cape Town because Mr Fredericks could not work when it was taking so long for them to get healthcare for their son

‘Damian and I played cricket and I noticed that he couldn’t bring his arm up further than his shoulder,’ he said.

‘I asked him what was wrong and he said “I can’t lift my arm up anymore”. I said “no” because he could always do it.’

Mr Fredericks said he was self-employed but lost everything after spending so much time in hospital trying to figure out what was wrong with this son.

Eventually he and his family were forced to relocate from the coastal city of Durban to the township near Cape Town, where they share a house with others.

The family said they hope to have their own home soon as they would like for Mr Fredericks to have a room specially fitted to cater for his needs.

His neck, shoulders and arms are locked in place by FOP but the bottom half of his body is still unaffected.

Mr Fredericks’ mother, Freda, said she remains positive as her son is handling having FOP well and has been positive about his situation.

She said: ‘He plays outside and when he is too rough and I tell him to take it easy, but he will always tell me that if he stops now FOP will get the better of him.

The 18-year-old himself added: ‘It was hard at first but I just took it one day at a time.’