Heartbroken mother claims her son, 14, killed himself because he felt ‘isolated’ during lockdown

A heartbroken mother believes her son would still be alive if school hadn’t been cancelled due to Covid – as she claims he took his own life while feeling ‘isolated’ in lockdown.

Tracey Tyler had taken on an extra night shift on the coronavirus ward at her local hospital when she came home and found her son Sam, 14, dead in his bedroom on May 25.

The schoolboy had been ‘laughing and joking’ while playing online games with pals and planning trips with them – before telling them he would be ‘back in two seconds’.

However Sam never returned and Tracey says she discovered him hanged when she came home from her shift.

Four months on, Tracey has found the strength to share Sam’s devastating story in the hopes it saves other children’s lives.

Heartbroken mother Tracey Tyler (left) has spoken out after she found 14-year-old son Sam (right) hanged in his bedroom. Tracey believes Sam took his own life because he was feeling isolated during the nationwide lockdown imposed to tackle coronavirus earlier this year 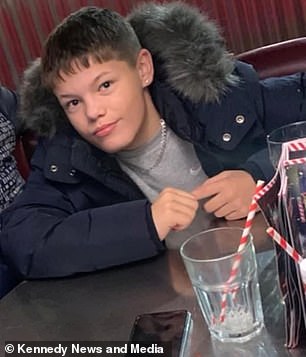 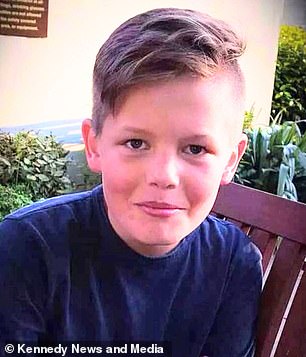 Tracey says she left Sam playing computer games with friends online when she went to work on the local coronavirus ward in Bedworth, Warwickshire, but he was dead when she returned

The 40-year-old is urging parents to ‘ask the awkward questions’ as she believes that ‘a five-minute conversation’ could save their child’s life.

The mum-of-three said she hoped Boris would not call for another lockdown as ‘kids are suffering’ and says she believes more people died of suicide in August than Covid.

Tracey, from Bedworth, Warwickshire, said: ‘Sam had everything. You would never think he would do this.

‘Knowing my child has chosen to end his life, without leaving us any explanation, is hard. It’s tough. There was no note or anything. It’s like you’re on auto-pilot. My heart is broken.

‘If I’d just asked him, I think he’d have told me. I thought him being moody was down to being a teenager. You don’t want to ask. It’s a taboo subject. No-one wants to talk to their child about their own death. 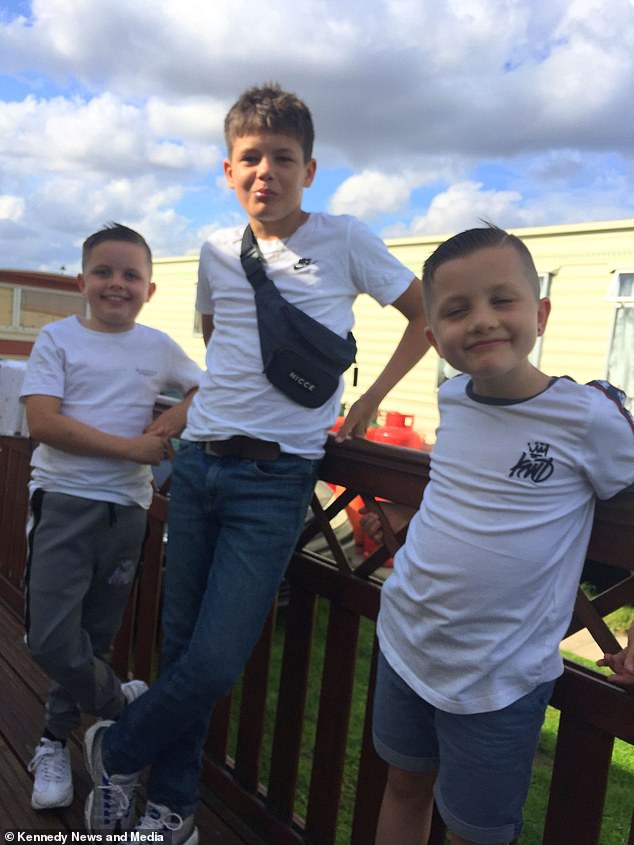 Sam, pictured with brothers Nathan, 11, and Daniel, 9, was described as having a ‘heart of gold’

‘I just want people to realise even if your child is happy and you just think ‘oh, they’re a bit hormonal because they’re teenagers’, just ask.

‘An uncomfortable five-minute conversation could save them. I wish I’d done that with Sam. He felt isolated when we were in proper lockdown but when I left to go to work, he was on his headset on the computer. He was laughing and joking and making plans to go fishing after lockdown.

‘Him and his friends wanted to book a Harry Shaw coach to go to the beach – that’s what they were talking about. He just said ‘I’ll be back in two seconds’, then never went back online.

‘I do believe if he’d been at school, in a routine, it wouldn’t have happened. The only thing that changed was he was awake all night playing games, sleeping all day – like all the kids were.’

The health care support worker had taken on extra work to help out during the coronavirus pandemic and had no idea her son was suffering.

He had shown no history of mental illness and Tracey brushed off his moodiness as being that of a typical teenager. 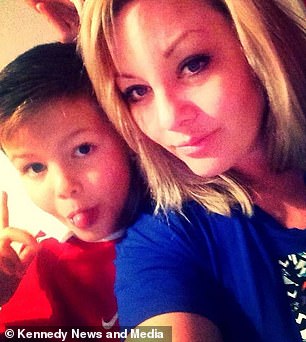 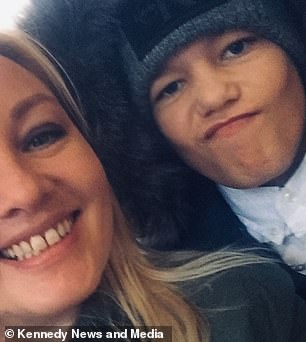 Tracey says Sam was always laughing and joking and that there were few signs he was thinking of ending his life. The 40-year-old is urging parents to speak with their children and campaigning for increased mental health awareness education to be taught in schools

But when she returned home after a night shift, her life changed in seconds as she found Sam had passed away.

Tracey said: ‘I was at work. I came home in the morning and the lights were all on in the house. I thought ‘that’s weird, why are the lights on?’ I made a cup of tea then went upstairs.

‘I thought ‘I’ll nip and turn his lights off’. I opened his bedroom door and his bed was empty. I thought ‘where’s he gone?’ Then I looked over. He was hanging there.’

Tracey claims Sam was ‘always laughing and joking’. There were few signs he was thinking of ending his life.

Tracey said: ‘Sam had a heart of gold. Everyone always says that about him. He was a really good lad and he’d want me to help. If you were a 14-year-old lad, you’d want to be him. He loved sports. He had everything he wanted. That’s what’s so hard.’

The mother-of-three believes the strict lockdown played a key role in Sam feeling isolated and said that children ‘are suffering’.

Tracey said: ‘We were struggling as adults to cope with when we went into lockdown and I think it’s hard for the kids being out of routine.

‘I think [schools being closed] had a major part of what happened with Sam because he felt so isolated. I know a lot of the kids would still go out and meet but he couldn’t do that. Because I worked on a COVID ward as well, I was so worried about him spreading anything.

‘These kids are suffering. I just hope we don’t go back into another lockdown. More people died of suicide in August than from COVID.’ 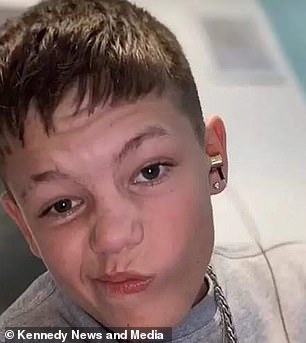 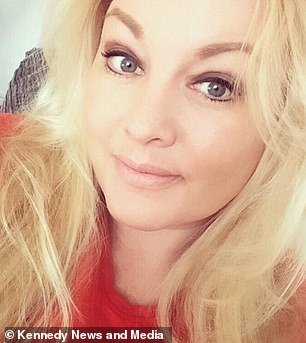 Tracey said: ‘You don’t want to think you’re putting that seed into their brains but the way the world is now, they’re experiencing so much more now than we did when we were young.

‘I think kids don’t want to upset their parents by telling them they feel this way. If the parents just ask it breaks that barrier down. That five-minute conversation could save your kid’s life.

‘I’ve had five people contact me this morning saying that thanks to that post, they spoke to their children last night and didn’t realise how bad they were feeling. They had no clue their kids were feeling this way.

‘If this helps one person, one parent, that’s saved their child, it’s worth it. I want to help these kids. The curriculum needs changing. We focus so much on physical education and mental wellbeing should be alongside that. Suicide rates are so high in this country.’ 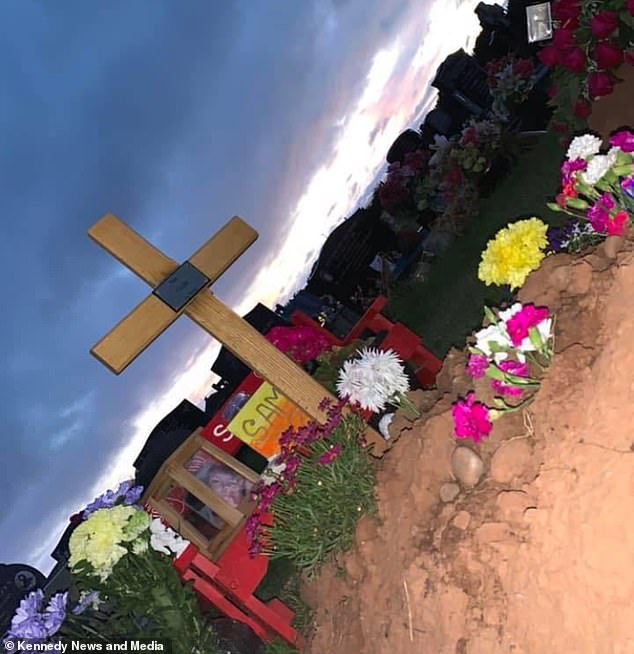 Tracey is now channeling her energy into her two other sons, Nathan, 11, who started secondary school earlier this month, and Daniel, nine.

She added: ‘Sam’s friends have been so good to me. They message me every week – they really have. It’s so thoughtful of them. All the teachers messaged me to say he lit up the classroom. Everyone knew him. He is the last person you would ever think would do anything like this.’

She added: ‘I wish Sam had died from an illness or an accident because at least then I’d have something to blame.’

The inquest into Sam’s death was opened and adjourned by the Warwickshire Coroner on 4 June 2020. There is no date set for the full inquest at the present time.

Ged Flynn, chief executive of mental health charity PAPYRUS, said: ‘For many parents, suicide is the unspoken dread. Talking to your child about suicidal thoughts can be very difficult and feel very daunting but starting the conversation is the most important thing.