‘Last night our world was changed forever. Our little superhero is no longer with us’ Heartbroken parents reveal son, eight, has finally lost battle with rare cancer hours after desperate plea to raise £50,000 for treatment

An eight-year-old boy who was battling a rare and aggressive form of cancer passed away last night – just hours after his parents made a desperate plea for donations.

Luke Bell, from Darlington in County Durham, had been battling neuroblastoma for two years, but his family were told recently that his cancer had spread.

His heartbroken parents confirmed he died ‘peacefully’ and ‘surrounded by the people he loved the most’ on Sunday on the TeamLuke Facebook page.

Mark and Becky Bell said: ‘Last night our world was changed forever. This latest battle has been one too many, and our little superhero is no longer with us.

Luke Bell, eight, from Darlington, County Durham, (pictured with parents Mark and Becky) passed away on Sunday after a two-year battle with cancer

‘Luke passed away peacefully, comfortable and in his favourite place surrounded by the people he loved the most.

‘Words can’t describe just how devastated and heartbroken we are, though we can take some consolation from the fact he is now free of pain.’

His parents also thanked everyone who had been involved with fundraising or donating to Luke’s cause.

‘As a family we would like to thank everyone that has been involved with Luke’s journey, whether it’s been donating, fundraising, messages of support or sharing his story,’ they said. 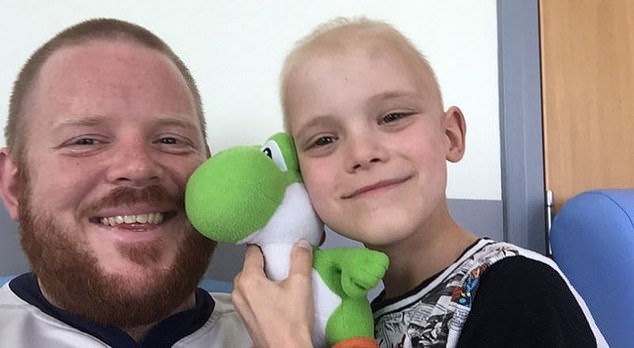 His heartbroken parents said Luke (pictured with Mr Bell) had passed away ‘peacefully, comfortable and in his favourite place surrounded by the people he loved the most’

‘The number of people that have reached out to us over the last 20 months has been a real source of strength and we will always be grateful for that.

‘Now is not a time for sadness, for Luke wouldn’t stand for it. Now is the time for focussing on the positives, the amazing memories and the incredible impact he has had on so many lives.

‘At only eight years old Luke has shown such a huge amount of strength, bravery and courage to fight as long as he did.

‘The world seems a darker place today without his infectious smile.’ 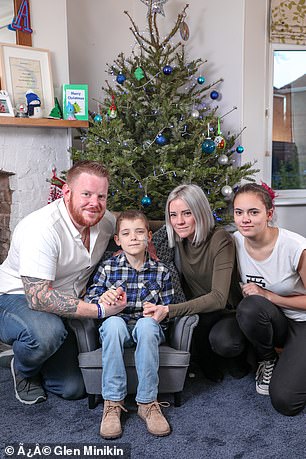 Luke (pictured with parents Mark and Becky and sister Alysha) had been diagnosed with neuroblastoma, a rare form of cancer, in April last year

The news comes just a day after Mr and Mrs Bell made a desperate plea to the public to raise £50,000 for experimental treatment at the Paediatric Cancer Centre in Barcelona, Spain.

Mr Bell told the Mail on Sunday his son had been accepted onto the trail and was due to begin on January 21.

He said: ‘He has been accepted on to the trial, starting on January 21, but he has to be well enough to start it.

‘In November, his NHS consultant said that his cancer had spread to his skeletal system and that his bone marrow is now made up of 70 per cent cancerous neuroblastoma cells.

Neuroblastoma, which Luke was diagnosed with in April last year, strikes fewer than 100 children a year in the UK.

Between his diagnosis and last Christmas he had 11 rounds of chemotherapy and surgery to remove a large tumour wrapped around his adrenal gland and a kidney.

In January, the family were told Luke was clear of cancer but in April were given the devastating news that it had returned.