Heartbroken parents will one day bury their fourth child

A couple who have lost three children to a rare genetic disease are now watching their fourth die of the same condition.

Eight-year-old Jade Lake has already outlived most children diagnosed with Leigh syndrome, but her parents say she could die at any time.

Her three siblings were killed by the inherited condition, which causes brain damage which worsens until the body eventually shuts down.

Parents Craig and Adele, from Grimsby, say Jade’s condition is getting worse in front of their eyes and ‘she might go to bed one night and not wake up’.

Craig and Adele Lake, aged 46 and 33, have lost three children to Leigh syndrome, which causes fatal brain and nerve damage in childhood (Jasmine, left, died in 2015 at the age of nine, and Jade, right, is still alive but will also eventually be killed by the illness) 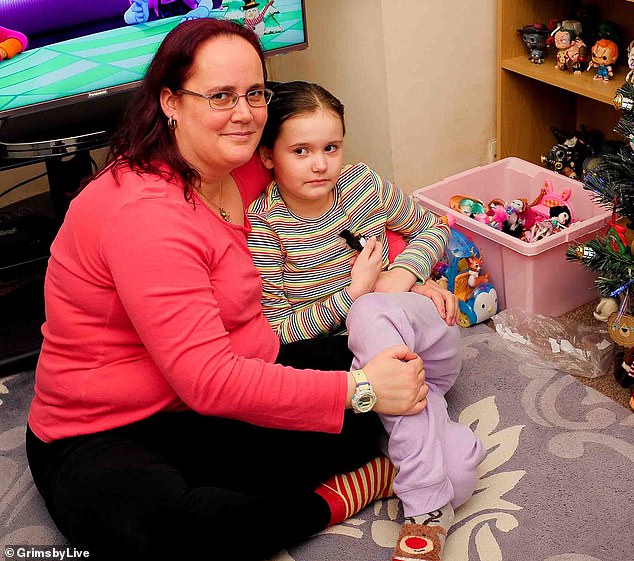 Adele Lake, pictured with her only remaining child Jade, is living with the knowledge her daughter will someday die of the inherited condition which killed all her siblings

Mr Lake has already lost three of his children and now lives with the knowledge he will go through the same thing again.

Jade, the couple’s only surviving child, will also die of the incurable illness but her parents have no idea when the end might come.

Leigh syndrome usually shows symptoms before a child is one year old and is fatal within three years, but some people survive for longer and even into adulthood.

The illness causes progressive nerve damage which can cause paralysis in the muscles, destruction of connections in the brain and serious breathing problems.

‘I would love to say she will be here in another five years,’ said Mrs Lake, 33, who carries the gene to pass on the condition. ‘But sadly we can’t guarantee that.’

Jade has a mental age of two and severe epilepsy as a result of the condition, as well as a short memory and constant tiredness.

Despite her disabilities she is the first of the Lakes’ children to walk and talk – rare abilities in Leigh syndrome sufferers. 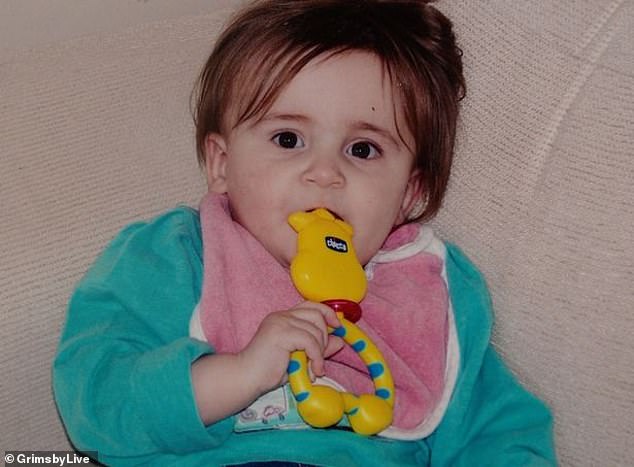 Angel, Mr and Mrs Lake’s third child, died in 2011 aged just three years old. With the exception of Jade, who is still alive, each of the couple’s four children had a shorter life than the last because of the incurable Leigh syndrome

At the age of eight, she is considered long-lived.

‘It’s all about making memories because life is so short,’ said Mr Lake.

‘We don’t know what’s coming tomorrow. We just take each day as it comes because we don’t know how long it’s going to be.’

The couple say they have become better at recognising warning signs the condition is beginning to take hold.

‘She is becoming more and more tired,’ said Mr Lake.

WHAT IS LEIGH SYNDROME?

Leigh Syndrome is a severe neurological disorder which usually starts to show symptoms during the first year of life.

It causes the progressive loss of mental abilities and of movement.

It is usually fatal within a couple of years because it causes the lungs to fail.

Severe muscle and movement problems cause loss of feeling in the limbs, weakness and balance problems.

Eye, heart and breathing problems are also common in people with Leigh syndrome.

The symptoms are caused by patches of damaged tissue that develop in the brains of patients and these lesions are often accompanied by the loss of the nerve coatings.

This reduces the ability of the nerves to activate the muscles used for movement and to relay sensory information to the brain.

The condition occurs in about one in 40,000 babies.

The condition is caused by mutations in one of more than 30 different genes, and is inherited from parents who don’t have the condition themselves.

‘Her fits have increased over the past six months. We know from experience that is a bad sign.’

Something as simple as a common cold could be enough to kickstart a deadly chain of events for Jade, as the couple have learnt from their other children.

The first child they lost, Angel, died after falling ill just two days earlier and their son, AJ, died within 12 hours of developing a high temperature.

Jasmine, who lived until the age of nine, however, suffered a slow 38-day death.

‘She was fitting like a trooper,’ said Mr Lake. ‘Her heart would stop constantly. So we would have to resuscitate her and bring her back so many times.

‘She was really poorly. Then she just decided enough was enough.’

Jade was first diagnosed with Leigh syndrome several months after two of her siblings had started to show signs.

Jasmine’s walking struggles and ‘bum shuffling’ were initially classed as laziness by doctors and then falsely diagnosed as Rett’s syndrome.

‘None of the children have been planned at all,’ said Mr Lake. ‘But we don’t believe in abortion.

‘People may think we’re right or wrong but to us life is life no matter what.’

The couple say they have received abuse online and in the street because of their family.

‘We have been called all sorts,’ said Mr Lake. ‘I have been told to get sterilised. Our children have been abused in the street.

‘That’s just life. That’s their opinion. They don’t walk in our footsteps and see how we feel.’

‘We have no plans for more children. We have had enough. We will definitely make sure there’s no more accidents.’ 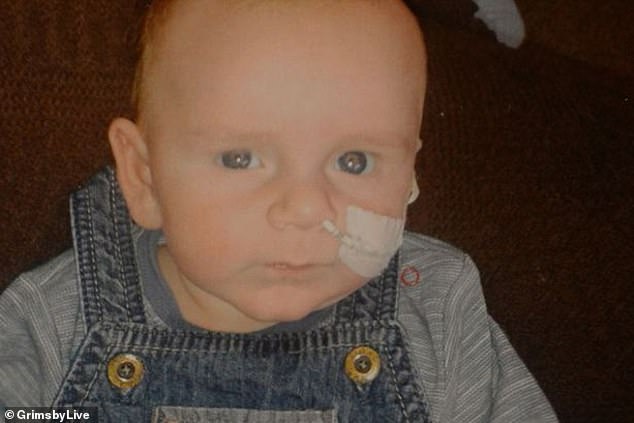 Mr and Mrs Lake keep the ashes of their three children in a hallway in their house, the boxes piled up in a wooden cabinet next to each of their favourite teddy bears.

Mr Lake said he looks into the cabinet every night to say ‘goodnight’ to his children and remember their short lives.

But the cycle of loss has has made it difficult for Mr Lake and Mrs Lake to grieve for their children who have died.

‘It’s very difficult,’ said Mr Lake. ‘People ask “do you grieve?” The problem is we have never really had time to do it.

‘Because we have lost one then we come back. It’s an ongoing cycle. We do grieve, but in our own way.’ 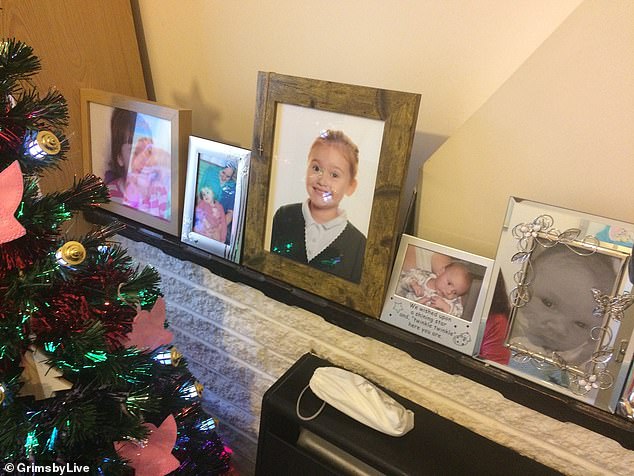 The Lakes’ four children all developed Leigh syndrome because of a genetic defect believed to have been inherited from their mother, Adele, who does not have the condition herself

‘It will hit us like a tonne of bricks one day,’ Mrs Lake added. ‘I know it will.’

As well as living with the memories of their previous children, the couple still have to deal with the demands of caring for Jade.

Jade’s screams, fits and hallucinations throughout the night have prevented Mr and Mrs Lake from having a good night’s sleep in 12 years, they say.

Because Jade can’t spit or blow her nose and frequently chokes on food, she also needs round-the-clock care during the day.

She needs a wheelchair to travel long distances and suffers severe epileptic fits.

But for now, all the Lakes can do is carry on in the knowledge that every day may be Jade’s last.

They paid a special thanks to Diana, Princess of Wales Hospital, their ‘second family’ at St Andrew’s Hospice and When You Wish Upon A Star.