The card reveal livestream for Hearthstone’s latest expansion The Witchwood will start at 7pm GMT on March 26.

The Witchwood will bring 135 new cards to the game, and will also add a new mechanic for you to build decks around.

Certain cards will provide bonuses if they’re used in a deck which is made up entirely of either odd-cost or even-cost cards.

The newest Hearthstone expansion is The Witchwood, which adds 135 spooky cards in April

The Witchwood doesn’t have a set release date, but Blizzard says it will be available either on or before April 30.

Card packs are available for pre-purchase now at a cost of £45 for 50 packs of five cards. Pre-purchasing also grants you 20 bonus card packs and a special Witchwood card back.

So far, Blizzard has revealed 10 of the cards we can look forward to. After March 26, we’ll be treated to the rest of the cards on offer. 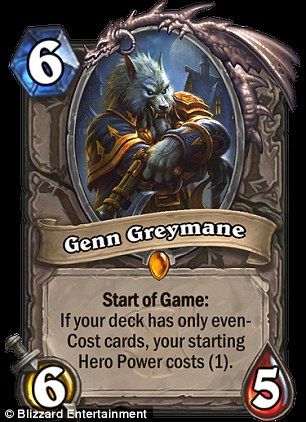 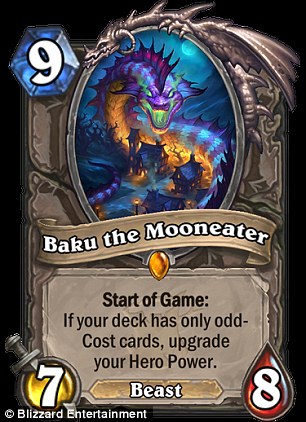 Baku tasks you with building a deck filled with only odd-costing cards, and no matter where Baku is in the deck, at the start of the game your hero power will become more powerful.

For example, the Hunter power increases to three damage, while the Warrior power grants four armor.

Genn requires you to build an even-cost deck, and if you do, at the start of the game your class’s hero power will cost just one mana.

The other cards released so far also take advantage of odd and even cost decks.

Black Cat’s Battlecry simply lets you draw a card if you have all odd cards, while Gloom Stag gets +2/+2 and Glitter Moth doubles the health of your other minions.

If you have an even deck, Murkspark Eel does two damage when it enters play.

An odd Mage can’t include even cost cards like Meteor or Blizzard, and your opponent will know that too and be able to act accordingly.

But you do gain access to new abilities and strategies. With an odd deck, you’re unlikely to be able to do much on turn two. But, turn two will be an excellent opportunity to use your upgraded hero power.

Conversely, an even deck won’t be able to play much on turn one. But, they will be able to use their cheaper hero power to get out of the gates a bit quicker.

Other cards which don’t focus on the odd and even mechanic include Phantom Militia, a 3 cost, 2/4 with Echo and Taunt. Pumpkin Peasant’s attack and health swap around for each turn it’s in your hand.

Another legendary called Azalina Soulthief allows you to replace your hand with a copy of your opponent’s when she enters play.