Heartwarming footage has captured the moment a five-year-old boy took his first unaided steps for the first time.

Felix Davidson, from Northumberland, is believed to be one of just 300 people in the world who suffers from cardiofaciocutaneous syndrome (CFC).

The rare genetic condition struck his joints, making them overly flexible, and doctors warned he may never walk in his life.

But Felix’s quick-thinking teachers recorded the precious clip of him walking, which his emotional parents have branded a miracle.

Julia, who has two other children, praised the staff for grabbing an iPhone to record the moment her ‘incredible’ son walked. 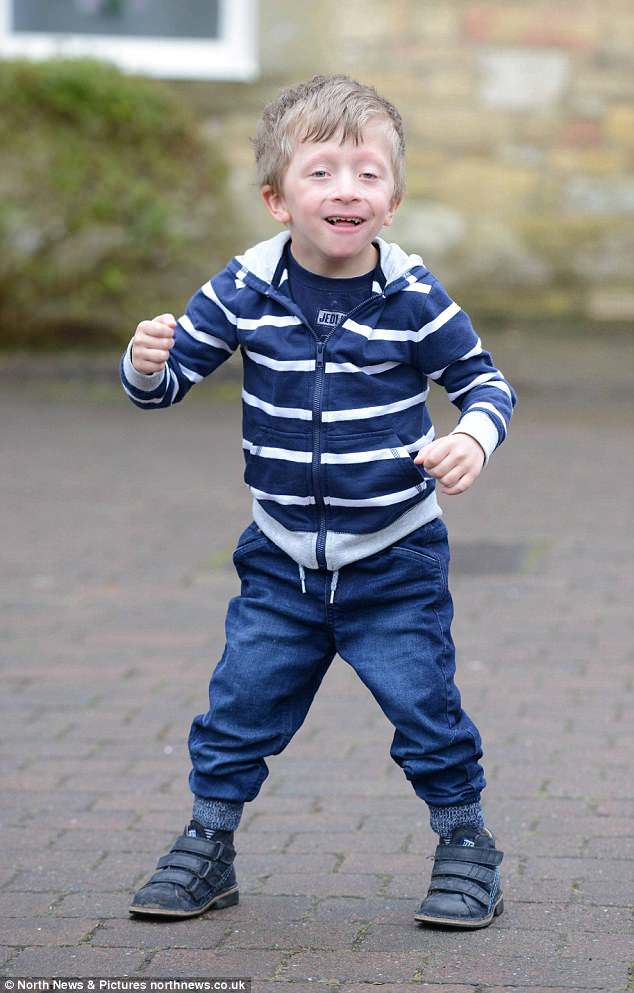 Felix Davidson, from Northumberland, is one of just 300 people in the world who suffers from cardiofaciocutaneous syndrome (CFC)

She said: ‘It is a miracle, last week he couldn’t stand or do any of this. It is amazing, he walks now, we were blown away.

‘We are over the moon and so delighted, he hadn’t made any signs that he was going to do it.’

Mrs Davidson, 44, claimed Felix’s ‘one-on-one’ at Abbeyfields First School, Morpeth, had a ‘sixth sense’ he was going to walk.

She added: ‘When they sent me the video I was crying my eyes out. I am so happy they were thoughtful enough to capture the moment.

‘I couldn’t speak but it was happy tears. Felix is amazing, incredible, and sometimes frustrating. 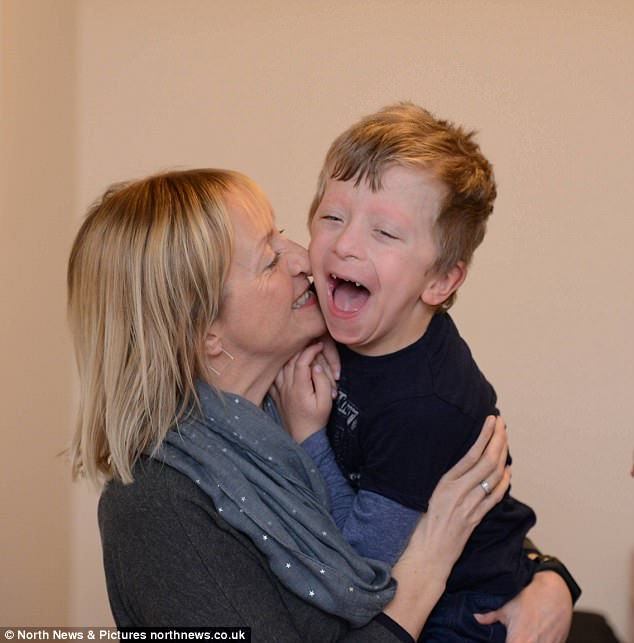 The rare genetic condition has struck his joints, making them overly flexible, and doctors warned he may never walk in his life (pictured in the arms  of his mother, Julia) 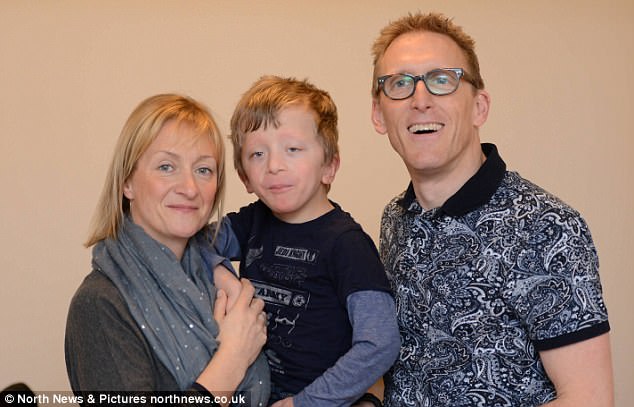 But Felix’s quick-thinking teachers recorded the precious clip of him walking, which his emotional parents have branded a miracle (pictured with his mother Julia and father John)

CARDIOFACIOCUTANEOUS SYNDROME: WHAT IS IT?

Cardiofaciocutaneous syndrome (CFC) is a rare genetic disorder that is believed to strike one in 810,000 people.

Charities believe that the actual incidence of CFC may be much higher, because it shares similarities to other conditions.

Researchers at the Icahn School of Medicine at Mount Sinai believe there could be fewer than 300 cases worldwide.

CFC usually affects the heart, facial features and skin. Patients tend to have some form of developmental delay and can have flexible joints.

It is caused by a mutation in the BRAF gene, but similar variations in the MEK1, MEK2 and KRAS genes have also been linked.

There is no cure, and treatment often revolves around heart surgery to repair defects and medications for other problems.

‘Before he would bum shuffle but just last week he couldn’t do any of this.’

Felix started to show symptoms of CFC at three weeks old after he struggled to swallow. However, he wasn’t diagnosed until he was 18 months.

He has debilitating skin problems, overly flexible joints and has to be fed through his stomach, his parents said. He uses a walker to help move.

His 47-year-old father, John, said: ‘The biggest fear when he was diagnosed was how long he would live.

‘When we found other families across the world we came across people that had lost children and saw some very, very ill children.

‘At first Felix was very ill but he is now very high functioning.’

The optometrist added: ‘Felix is incredible, it is always chaos in the house but we wouldn’t change it for the world.’

The rare genetic disorder CFC affects the skin, facial features and heart but because it is so rare the effects aren’t fully known.

The youngest in the family has brought his older brothers, Thomas, 11, and Teddy, nine, closer together.

Thomas, the oldest, said: ‘We were so surprised, we had never seen it before, when we saw him walk towards us for the first time it was amazing.

‘But I thought the surprise was a puppy so I was a bit disappointed! We fight with each other but not with Felix. We fight to be Felix’s favourite big brother.’