A Good Samaritan has been spotted heroically rescuing a joey from an outback cattle grid after the young kangaroo got stuck between the grate.

The video shows the man standing over the grid and asking a companion to stand back.

He then bends over and grabs the baby ‘roo’s tail with both hands before he hauls it up through the bars and releases it to freedom.

Despite some grunting, the joey hops off into the bushland, unscathed by its ordeal.

The unknown man apparently noticed the kangaroo’s tail sticking up from the grid as he drove down the road, before reversing to investigate further.

Many people commenting on the post queried the trap-like qualities of Australia’s distinctive cattle grids. 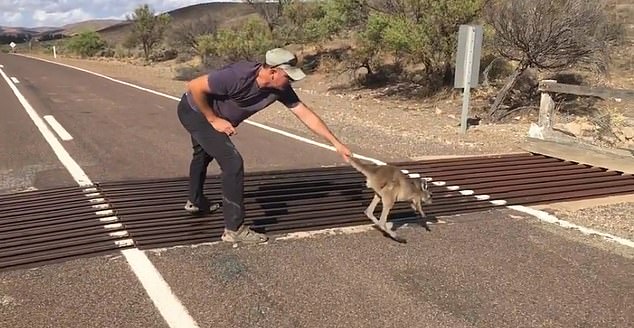 ‘They definitely need to change the design of that cattle grid so other poor animals don’t fall through,’ wrote one.

Cattle grids are a familiar feature on roads throughout rural and regional Australia, the metal bars placed over a deep ditch underneath to deter cattle from walking along the road.

Unfortunately the bars are wide enough to trap smaller animals such as juvenile kangaroos. Horses have also been known to break legs when trapped in the grids.