Heartwarming moment Rafael Nadal meets ball girl Anita, 13, to say sorry for hitting a forehand into her face – as jealous fans say they wish THEY were struck

Rafael Nadal has met the ball girl he kissed on the cheek after hitting a forehand into her face.

The world number one was up against Argentina’s Federico Delbonis at the Australian Open in Melbourne on Thursday when he hit 13-year-old Anita in the face during the third set.

The 33-year-old Spanish tennis star rushed to the ballgirl’s aid and kissed her on the cheek. 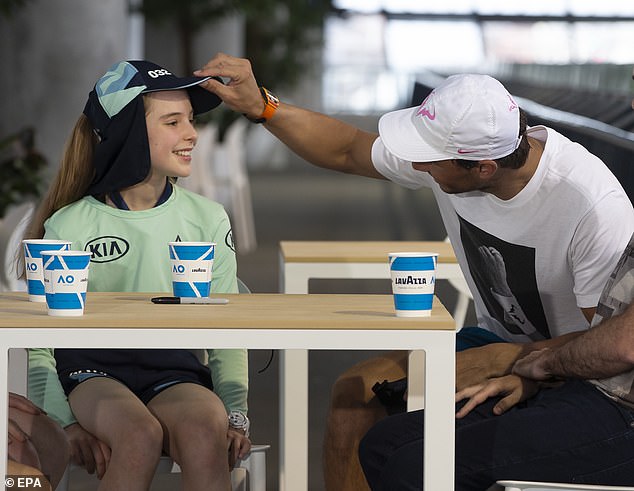 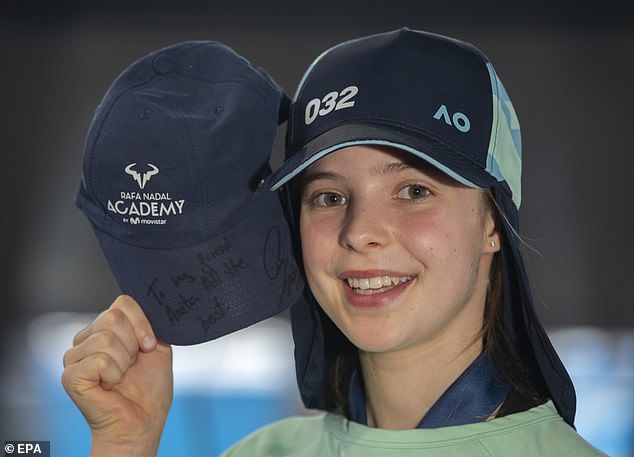 Antia (pictured) was given a cap from Nadal signed, ‘To my friend Anita. All the best’ 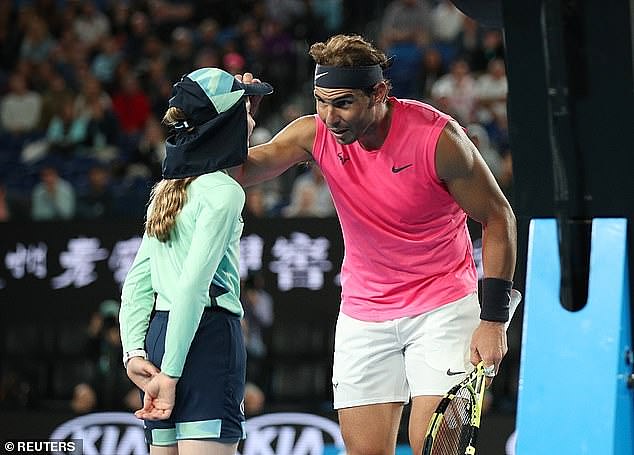 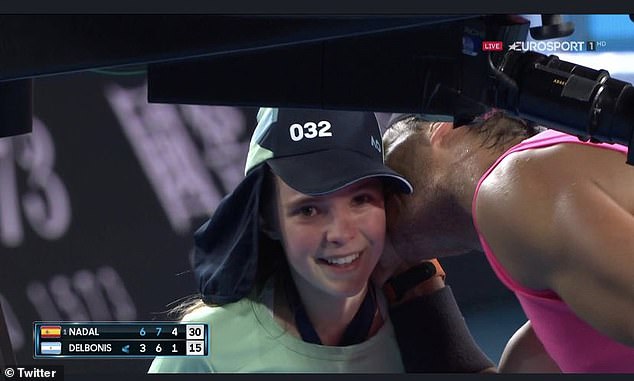 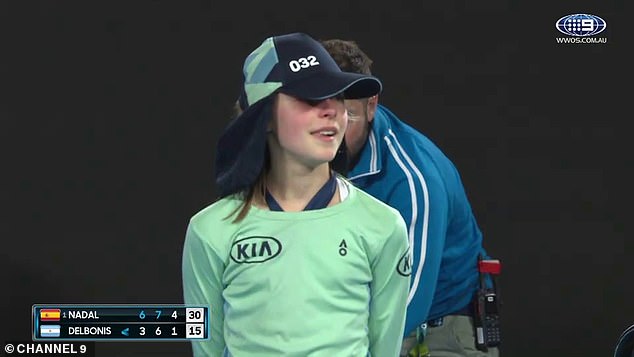 On Friday, Nadal met the youngster and left with a signed hat saying: ‘To my friend Anita, all the best’.

His fans fawned over the world number one and said they wished that they were kissed by Nadal.

‘Oh to be almost hit in the head by Rafael Nadal’s tennis ball, and to then be kissed tenderly on the cheek in apology,’ one wrote.

‘Rafael Nadal is the best. Apologizes to the girl after accidentally getting hit on the head and gets a kiss. What a class act by Nadal!! #AusOpen #AO2020,’ another wrote.

‘Imagine getting hit in the face bu Rafael Nadal and then him coming to comfort you and kiss you on the cheek,’ someone else commented. 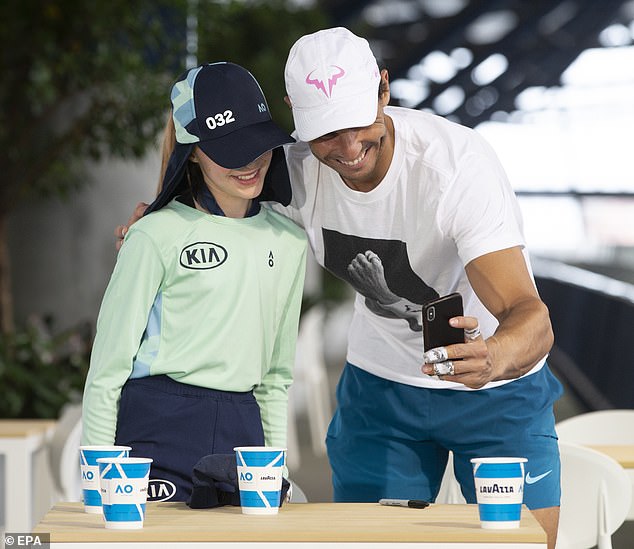 Nadal once again met with Anita to ensure she was okay and received a signed cap and one of his sweatbands as a souvenir.

He also shared a smiling selfie to Instagram after having checking up on Anita to ensure she was okay.

‘Very happy to see that Anita is doing well,’ he wrote.

‘I also had the chance to meet her, her brother Mark and parents. Thank you.’ 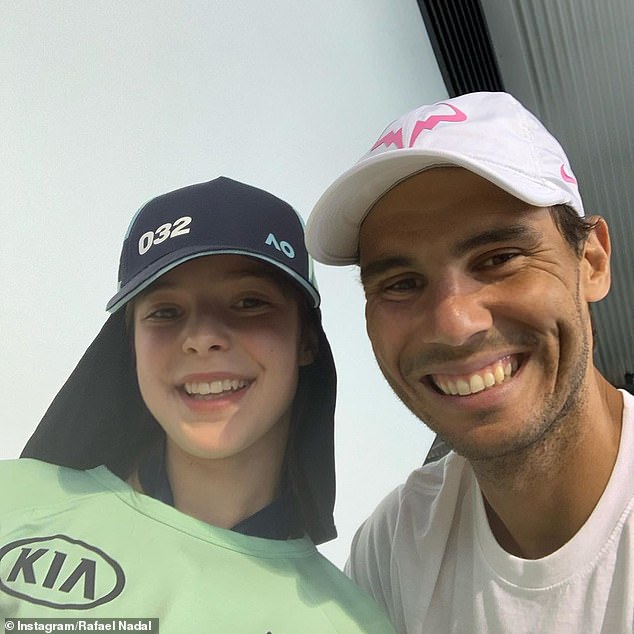 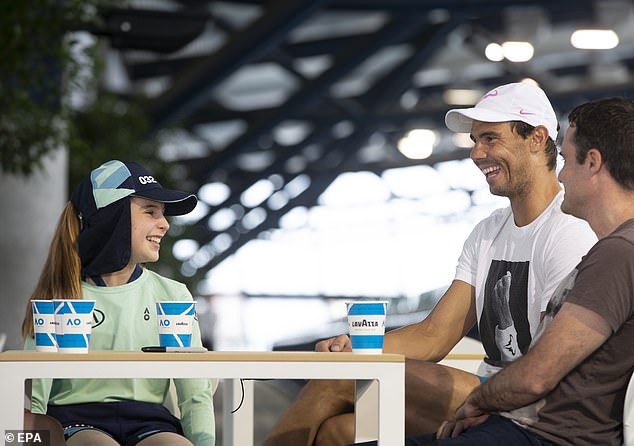 In his post match interview on Rod Laver Arena, Nadal said it was one of the scariest moments of his career.

‘For her it was probably not a good moment,’ Nadal said.

‘I was so scared for her honestly the ball was so quick and (hit her) straight on the head. She’s a super brave girl.’

‘Honestly it was one of the more scary moments on the court.’

‘I lost a lot of opportunities on break points. Honestly, I found a way to finally win that second set and in the third, I think I played a little bit more relaxed,’ he said.

He will play fellow Spaniard Pablo Carreño Busta in the third round, and a possible fourth round clash with Australian star Nick Kyrgios. 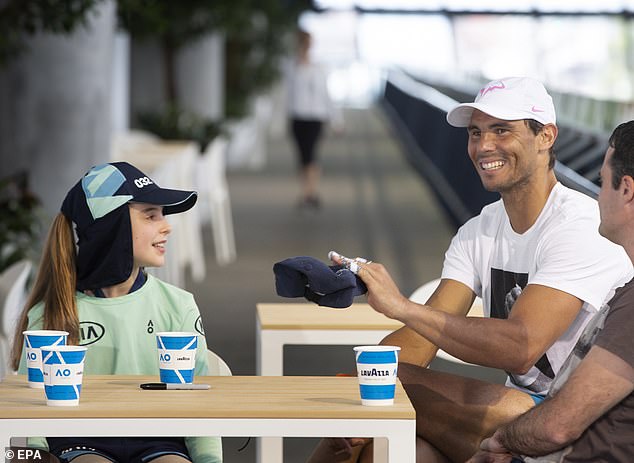