Heather Locklear has been placed on a 5150 hold after allegedly beating up her boyfriend and throwing him out of her house, a family source tells DailyMail.com

Heather Locklear has been placed on a 5150 hold after allegedly beating up her boyfriend and throwing him out of her house, a family source tells DailyMail.com.

The news comes months after the troubled actress was arrested over a string of incidents involving alcohol and domestic violence.

Locklear, 57, was arrested most recently in June, after downing a bottle of tequila and crashing her car into a pylon on the grounds of her California home.

She then attacked the cops when they arrived to calm her down and was arrested and booked into Ventura County Jail on police battery charges.

She was released the following day but was rushed to hospital a little over six hours later after allegedly taking an overdose.

Locklear was placed on a 5250 psychiatric hold, which lasts for up to 14 days and includes a five-day detox as well as mental evaluation.

That arrest came exactly a week after Locklear was cuffed and taken to hospital after choking her mother Diane, 85, and threatening to shoot herself. 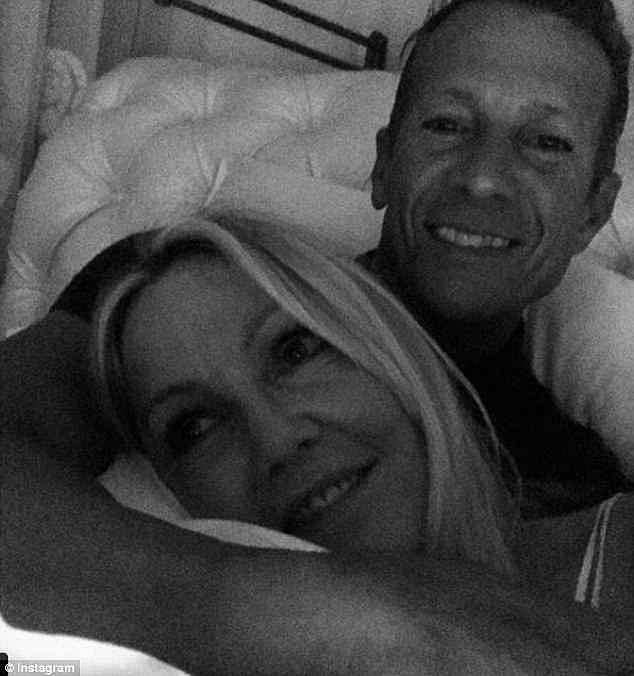 Locklear, 57, was arrested in February for felony domestic violence and battery on a police officer after she nearly bit off her boyfriend Chris Heisser’s (pictured) nose off in a drunken rage 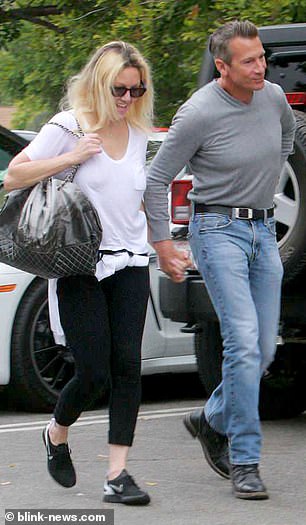 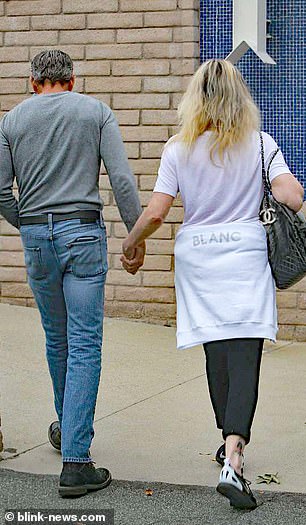 In May, Locklear was pictured with her boyfriend as they walked into an Alcoholics Anonymous meeting in Thousand Oaks 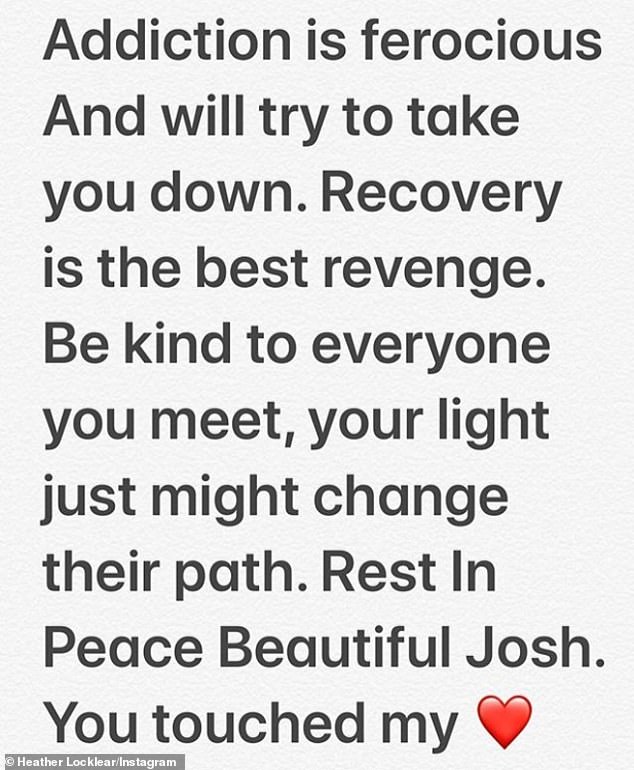 In September, Locklear shared an Instagram post calling addiction ‘ferocious’ in a tribute to her late friend Josh. The 90s icon didn’t elaborate further as to who Josh is or the nature of his death

After being released from hospital on Tuesday June 19, the troubled Melrose Place star allegedly checked into a detox center but checked herself out again after completing just two days of a five-day program.

It was on her way home from the detox center on Sunday morning June 24, that she purchased a bottle of tequila which she drank before later attempting to drive off in her Porsche.

When police responded to a disturbance call at the residence at midnight, an angry Locklear allegedly punched a police officer who attempted to separate her from her family and kicked an EMT who was attempting to strap her to a gurney.

She was taken to hospital before being booked into the Ventura County Jail at 2am over two misdemeanor charges of battery on a peace officer.

The paramedic later filed a lawsuit against the Spin City star over the incident.

A week before her arrest, the mother of one was placed on a three-day involuntary psychiatric hold after threatening to commit suicide.

Heather’s mom Diane, who was reportedly attacked by Locklear, made a 911 call for help after her daughter threatened to ‘shoot’ herself.

According to documents, the panicked call was placed at 3.56pm with accompanying note reading: ‘Suicidal who is violent’.

Two days before she was hospitalized for being suicidal, the Dynasty star got into a public fight in a parking lot with fiance Chris Heisser.

Locklear’s multi-million dollar mansion has been designated a ‘hazard’ by the Ventura County Fire Department due to altercations at the property.

In February, she was arrested for felony domestic violence and battery on a police officer after police were called to her home for a disturbance.

A source in the Ventura police department told DailyMail.com that Locklear ‘was wasted’ when she and Heisser ‘got into a physical fight.’

When the police arrived, they attempted to arrest Heather after she’d clearly bitten her fiance. 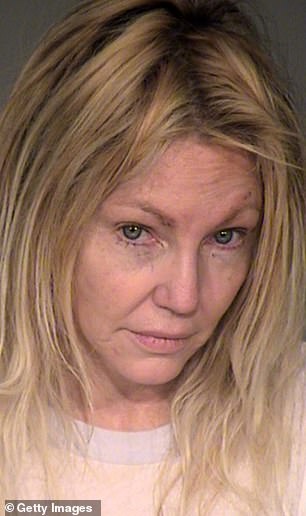 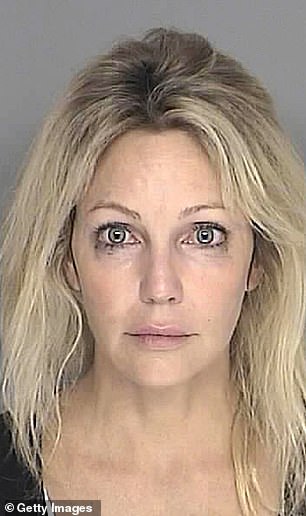 Locklear has been arrested multiple times in the past year for incidents involving domestic violence and alcohol. She is pictured left in her mugshot in February, and right in 2008 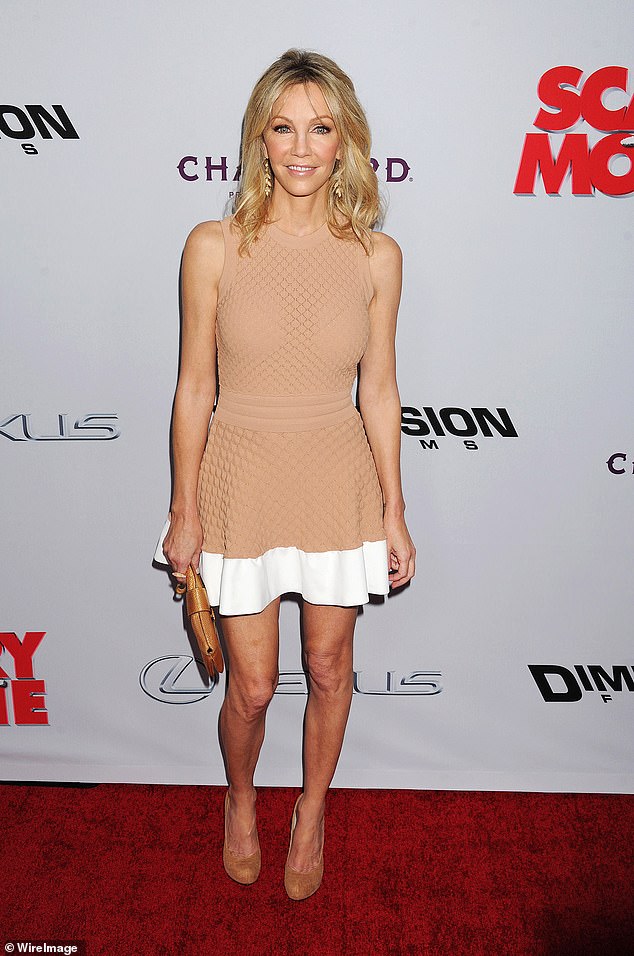 According to The Blast, cops said Heather had allegedly ‘kicked and hit three deputies’ as they were putting her into a police car ‘and she remained ‘agitated and extremely uncooperative.”

The whole horrifying incident went down in front of her ‘mortified’ adult daughter Ava, age 20, who is currently in her senior year in college.

Ava’s father, Bon Jovi guitarist Richie Sambora, told DailyMail.com exclusively that he was sticking by his ex-wife and daughter.

‘I will of course always be there for Heather and especially Ava. I am very proud of my daughter for her composure and strength during this difficult time.’

Richie helped put together the team of medical professionals who would care for Locklear at a long-term residence where she was scheduled to stay until September.

In August, the actress returned to social media following a brief break with a post of her dog, amid reports that she was ‘climbing the walls’ in rehab and bombarding boyfriend Chris Heisser with emotional phone calls. 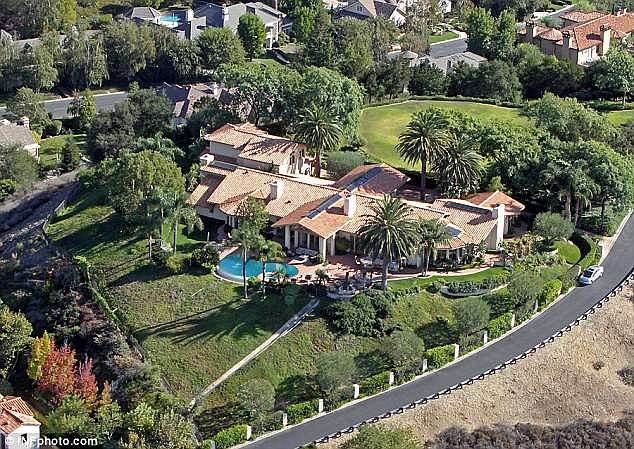 In February, Locklear was arrested at her six-bedroom home in Thousand Oaks, California following an altercation with boyfriend Chris Heisser. An incident report shows the fire department has listed her address as a ‘hazard’